ABSTRACT: Background: The most common disease of endocrine disorder is diabetes due to underlying causes and pathophysiologies. It is spreading swiftly worldwide and is expected to reach up to 4.4% in the world by 2030. There are numerous synthetic glucose-lowering drugs on the market, but they all have detrimental effects. As a result, this necessitates the search for an alternative anti-diabetic agent from a natural source, i.e., herbal remedies that have been used traditionally and have a safe profile. Aim of the study: The purpose of this study was to look into the anti-diabetic activity of C. cuspidatus methanolic leaves extract on the glycation of Bovine Serum Albumin by measuring fluorescence intensity at various concentrations (1 mg/ml, 2 mg/ml, 4 mg/ml, 6 mg/ml, 8 mg/ml, 10 mg/ml) using positive control 1mM of Aminoguanidine (1 mg/ml, 2 mg/ml, 4 mg/ml, 6 mg/ml, 8 mg/ml, 10 mg/ml). Methodology: Phytochemical screening of Chamaecostus cuspidatus for determination of Phytoconstituents. BSA- Glucose Assay for in-vitro Glycation- methodology (Brownlee et al., 2013). BSA (l0 mg/mL) was incubated with glucose (500mM) in phosphate-buffered saline (PBS) (5mL total volume, pH 7.4) and extract containing 0.02% sodium azide at 37 °C with a final concentrations of BSA (2mg/mL), glucose (40 mM), sample (0.1 to 0.5mg/mL). All the reagents and samples were sterilized by filtration through 0.2 μm membrane filters. Results: The phytochemical screening shows the presence of flavonoids, saponins, terpenoids, tannins, and chlorophyll. The BSA- Glucose Assay for in-vitro Glycation shows that after 15 days of incubation with methanolic extract of Chamaecostus cuspidatus and aminoguanidine the fluorescence intensity was significantly decreased in a concentration-dependent manner. Conclusion: The reductions in fluorescence intensity reveal that methanolic extract of Chamaecostus cuspidatus can inhibit the formation of AGEs and provide protection from diabetic complications.

INTRODUCTION: Diabetes is a group of metabolic diseases characterized by hyperglycemia caused by insulin secretion, insulin action, or a combination of the two. Diabetes chronic hyperglycemia is linked to long-term damage, dysfunction, and failure of various organs, particularly the eyes, kidneys, nerves, heart and

blood vessels (Kharroubi and Darwish 2015) 4. Diabetes and its complications are rapidly gaining prominence as the leading cause of morbidity and mortality worldwide. The negative effects of persistently elevated plasma glucose levels on various body parts differ depending on the cell type.

Glucose forms covalent adducts with plasma proteins during a long-term hyperglycemic state in diabetes mellitus via a non-enzymatic process known as glycation (Gkogkolou and Böhm 2012) 5. Protein glycation and the formation of advanced glycation end products (AGEs) are important in the pathogenesis of diabetic complications such as retinopathy, nephropathy, neuropathy, cardiomyopathy, and other diseases rheumatoid arthritis, osteoporosis, and ageing (Singh et al., 2014) 6. Protein glycation disrupts normal functions by altering molecular conformation, altering enzymatic activity, and interfering with receptor function. AGEs form intra and extracellular cross-links with proteins and other endogenous key molecules such as lipids and nucleic acids, which contribute to the development of diabetic complications (Chen et al., 2018) 7. There are numerous synthetic glucose-lowering drugs on the market, but they all have drawbacks. As a result, this necessitates the search for an alternative anti-diabetic agent from a natural source, i.e., herbal remedies that have been used traditionally and have a safe profile.

Chamaecostus cuspidatus Nak (syn. Costuspictus Don, Costus mexicanus Liebm or Costus congenitus Rowle), commonly known as Fiery costus, Step ladder, Spiral flag, or Insulin plant, is native to South and Central America (Jyothi et al., 2015) 1. It is widely grown in gardens as an ornamental plant in South India and also grows wild in many places. The plant belongs to the family Costaceae (Hedge et al., 2014) 2. Costusigneus is a synonym of Chamaecostus cuspidatus, which is an accepted name. The Costaceae was first raised to the rank of the family by Nakai based on spirally arranged leaves and rhizomes being free from aromatic essential oils (Hedge et al., 2014) 2. In Siddha medicine, the plant is used for diabetes; leaves are chewed twice daily or dried powder of leaves taken 1/2 to 1 gram twice daily. Used by tribal people of Kolli hills of Tamil Nadu for diabetes. Leaves are consumed as fresh, dried, and powder leaf forms. In Mexico, infusion of aerial parts is used to treat renal disorders (Hedge et al., 2014) 2.

Botanical Snippet: The family Costaceae consists of four genera and 200 species. The genus Costus is the largest family, with about 150 species of mainly tropical distribution (Jyothi et al., 2015) 1. Chamaecostus cuspidatus is a perennial, upright, spreading plant growing to a height of 2 feet, with the tallest stems falling and lying on the ground (Hedge et al., 2014) 2. Leaves are simple, alternate, entire, oblong, 4-8 inches long with parallel venation, spirally arranged around the stems (Hedge et al., 2014) 2, dark green leaves have a light purple underside. Flowers are orange, 1.5 inches in diameter, on cone-like heads at the tips of branches. Fruits are green colored, less than 0.5 inches. 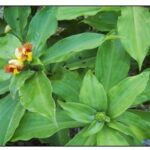 Petroleum Ether Extract of Chamaecostus cuspidatus: For phytochemical screening, the sample is mixed with more petroleum ether and then at 60 °C gets heated for confirmation of chlorophyll in the sample (Jangid et al., 2021) 12.

Bovine Serum Albumin (BSA) – Glucose Assay for In-vitro Glycation: The methodology was based on that of (Brownlee et al., 2013). BSA (l0 mg/mL) was incubated with glucose (500mM) in phosphate buffered saline (PBS) (5mL total volume, pH 7.4) and extract containing 0.02% sodium azide at 37◦C with a final concentrations of BSA (2mg/mL), glucose (40 mM), sample (0.1 to 0.5mg/mL). All the reagents and samples were sterilized by filtration through 0.2 μm membrane filters. The protein, the sugar, and the prospective inhibitor were included in the mixture simultaneously.

Amino guanidine was used as a positive inhibitor control. Reactions without any inhibitor were also setup. Each solution was kept in the dark in a capped tube. After 15 days of incubation, fluorescence intensity (excitation wavelength of 370nm and emission wavelength of 440 nm) was measured for the test solutions.

The percentage yield of petroleum ether extract of Chamaecostus cuspidatus:

Preliminary Phytochemical Screening of Petroleu Ether Extract of Chamaecostus cuspidatus: The preliminary phytoconstituents screening of petroleum ether is done. It confirms the presence of chlorophyll only in Table 1 Fig. 6. 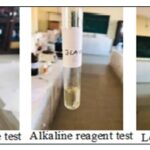 FIG. 2: IMAGES OF PRELIMINARY PHYTOCHEMICAL TEST FOR CONFIRMING THE PRESENCE OF FLAVONOIDS 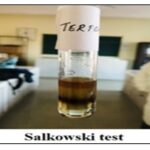 FIG. 3: IMAGE OF PRELIMINARY PHYTOCHEMICAL TEST FOR CONFIRMING THE PRESENCE OF TERPENOIDS 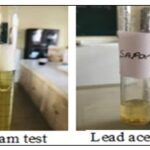 FIG. 4: IMAGES OF PRELIMINARY PHYTOCHEMICAL TEST FOR CONFIRMING THE PRESENCE OF SAPONINS 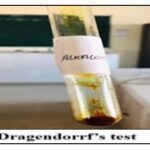 FIG. 5: IMAGES OF PRELIMINARY PHYTOCHEMICAL TEST FOR CONFIRMING THE PRESENCE OF ALKALO 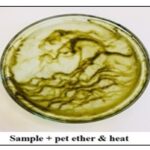 FIG. 6: IMAGES OF PRELIMINARY PHYTOCHEMICAL TEST FOR CONFIRMING THE PRESENCE OF CHLOROPHYLL 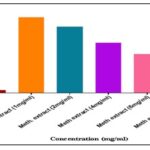 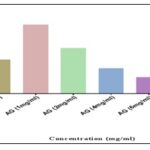 DISCUSSION: Hyperglycemia is thought to be the primary cause of micro and macrovascular complications in diabetes mellitus; persistent hyperglycemia increases the concentration of advanced glycation end products (AGEs) (Chawla et al., 2016) 8. This increase in AGEs has been linked to the ageing process as well as the pathogenesis of age-related disorders such as Alzheimer's disease and diabetic complications. AGEs are formed by a series of complex reactions between the carbonyl group of a reducing sugar or aldehyde and the free amino group of a protein, which results in the reversible formation of Schiff bases. Covalently bound Amadori products are then formed, inducing further oxidation to form dicarbonyl compounds, including fluorescent cross-links and nonfluorescent cross-links collectively referred to as AGEs (Kim et al., 2017) 9. Although aminoguanidine, a synthetic glycation inhibitor, reduces the development of diabetic complications, adverse effects have been reported in clinical trials involving this drug (Narayanan, 1993) 10. Thus, the discovery of novel inhibitors of the protein glycation reaction from natural sources represents a promising therapeutic strategy for the prevention of diabetes complications. The effect of methanolic extract of Chamaecostus cuspidatus on the formation of total AGEs was evaluated using the fluorescence property. The results indicate that methanolic extract of C. cuspidatus inhibits the glycation reaction effectively because oxidative reactions favor the formation of advanced glycation end products, methanolic extract of C. cuspidatus may inhibit their formation by reducing reactive oxygen species (ROS) or by trapping ROS formed in-vitro during the autoxidation of sugars and/or the oxidative degradation of Amadori products such as Fructosamine.

Our results indicate the presence of various phytochemicals such as flavonoids, terpenoids, saponins, alkaloids, etc. From previous studies, all these phytochemical constituents inhibit the formation of AGEs (Shad et al., 2014) 11. Therefore, from BSA-glucose assay, methanolic extract C. cuspidatus plant reduces the fluorescence intensity in a concentration-dependent manner, revealing the inhibition of AGEs formation.

CONCLUSION: Based on the findings presented above, we can infer that methanolic extract of the C. cuspidatus plant is a viable therapeutic intervention in the treatment of diabetes and the prevention of AGEs in diabetic complications.