INTRODUCTION: Antimicrobial resistance is a global challenge that makes effective treatment and control of infection difficult. It is an increasingly serious threat to the world public and animal health. Antimicrobial resistances have been documented in different species of bacteria in many countries of the world 1, 2, 3. There must be an effort to search for an option to tackle this global problem. One of the options is searching for alternative antimicrobials from different sources like plants.

Acacia etbaica is a medicinal plant which occurs in dry bushland, thickets, semi-desert scrub, and wooded grasslands. It is native to Eritrea, Ethiopia, Sudan, Somalia, Kenya, Uganda and Tanzania 4. It has been reported that the plant was used to treat swelling, ringworm infection, hemorrhoids, scabies, fire burn, eye infection of livestock and anthrax by the community of Kilte Awulaelo District of Tigray Region, Ethiopia 5.

The bark of the plant is also chewed as a stimulant and for the treatment of gonorrhea. Though the plant is used to treat various diseases of human and animal diseases by the local communities for centuries, still there is limited information on the antibacterial activity of the plant scientifically. Therefore, the objective of this paper was to determine the in-vitro antibacterial activity of Acacia etbaica.

Plant Collection & Crude Extract Preparation: The leaf of Acacia etbaica was collected in 2014 from Mekelle and around Mekelle city which is located in the Tigray region of Ethiopia. Then, the leaf of the plant was air-dried under a shed at room temperature before it was ground with a micro plant grinder machine. The crude extract of the plant was extracted using 80% methanol according to the procedure described by Shewit et al. 6

Preparation of Test Bacteria: The test bacteria used to determine the antibacterial activity of Acacia etbaica were Staphylococcus aureus and Escherichia coli. These bacteria were obtained from the National Veterinary Institute, Ethiopia in lyophilized form. They were revived in the nutrient broth before culturing them in their respective selective media, i.e. Staphylococcus aureus, and Escherichia coli were cultured on mannitol salt agar and McConkey agar respectively for confirmation. Finally, the confirmed isolated were sub-cultured on nutrient agar aseptically, and separated colonies were suspended in sterile salt solution within a test tube until the turbidity matches with 0.5 McFarland standards. All these activities were conducted by following the standard laboratory procedures.

Disc Diffusion Test: The disc diffusion method for antimicrobial susceptibility testing was performed according to EUCAST 7. Briefly, the inoculums adjusted to 0.5 McFarland turbidity standards were spread evenly over the entire surface of the plate containing Muller -Hinton agar using sterile swabs. Then discs were applied immediately on the surface using sterile forceps. We used five discs (3 discs loaded with crude extract of a plant with equal concentration, one disc loaded with DMSO as a negative control and a chloramphenicol disc as a positive control) per 90 mm diameter plate. The antimicrobial activity of each plant was tested at a concentration of 1000µg and 500 µg per disc. Then, the inoculated plates were incubated at 37 °C for 20 h. Finally, zones of inhibitions were measured using electronic digital caliper in mm.

Determination of Minimum Inhibitory Concentration (MIC): The minimum inhibitory concentration was determined by microdilution method in 96 well plates according to Andrews, 8 with slight modifications. Briefly, serial dilutions of the plant extracts were made in small test tubes. The first test tube was filled with 2 ml of DMSO, and the test tubes were filled with 1 ml of DMSO. 200mg of the plant extract was dissolved in the first tube, and 1 ml of the solution was transferred into the second test tube. After thorough mixing, again 1 ml of the solution was transferred into the third test tube. This procedure was repeated up to test tube 10. Then, 25 µl of the crude extracts were transferred from each test tube to wells of 96-well plates, i.e. the crude extracts of test tube 1, 2, 3,… were transferred to two wells of the first row, second row, third row,… of the 96 well plates respectively.

Each well of the plate was loaded with 25 µl of bacterial suspension (adjusted to 0.5 McFarland standards), and 200 µl of broth except wells left for checking sterility. Chloramphenicol was used as a positive control, inoculated wells of antibiotic-free broth were used as negative control, and un-inoculated wells of antibiotic-free broth were used to check sterility. Then the plates were covered with plate sealing tape and incubated at 37 °C for 20 h. Finally, the lowest concentration of the plant extract that showed no visible growth was taken as minimum inhibitory concentration.

Data Analysis: Data on the zone of inhibition produced by each disc on each bacteria were stored in an excel spreadsheet. Then mean values for the zone of inhibition and standard deviation were calculated using SPSS statistical software version 17. One way ANOVA was used to see any statistical differences among the mean values of the plant extracts at two concentrations and the negative control. Finally, post hock test (using Bonferroni) was used to compare the mean values of the negative control with that of the plant extract at different concentrations.

RESULTS AND DISCUSSION: For crude extraction from the leaf of Acacia etbaica, 80%methanol was used. 125.281gm of crude extract was found from 480gm of the plant powder which resulted in a total yield of 26.1%. The consistency of the crude extract was semi-solid and sticky.  Using the agar disc diffusion method, Acacia etbaica showed mean zone of inhibition of 10.95 ± 1.49 mm and 13.34 ± 1.04 mm at a concentration of 500 µg and 1000 µg respectively against Staphylococcus aureus Fig. 1 and Table 1. 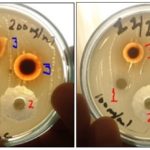 Acacia etbaica at a concentration of 500 µg/disc and 1000 µg/disc showed significant (p<0.05) antibacterial activity against Staphylococcus aureus and Escherichia coli when compared with that of the negative control. The Staphylococcus aureus bacteria that we used for this study was found to be resistant to penicillin while we conducted an antimicrobial susceptibility test for students in the laboratory. Thus, Acacia etbaica is potentially a promising plant for isolation of active compounds against resistant Staphylococcus aureus which is currently a big challenge in the globe. Possibly, the plant may also contain broad-spectrum antibacterial compounds, since it showed effect both on the gram negative and positive bacteria. Acacia etbaica is native to Eritrea, Ethiopia, Sudan, Somalia, Kenya, Uganda and Tanzania 4. There is no previous report on the antibacterial activity of this native plant which makes this work the first report on this aspect. To determine the minimum inhibitory concentration, microdilution method using 96 well plates were used. Using this method, the minimum inhibitory concentration of Acacia etibanica crude extract was found to be 0.039 mg/ml and 0.313mg/ml against Staphylococcus aureus and Escherichia coli respectively Table 2. Ceftriaxone and cefoxitin inhibit the growth of S. aureus ATCC® 25923 and E. coli ATCC® 25922 at a concentration of 0.008mg/ml 9. Even though Acacia etbaica showed higher MIC results than standard drug ceftriaxone and cefoxitin, it may be possible to get a comparable MIC result after separation and purification of the active compounds of the plant. In another study, Biswas, and Roymoj, 10 reported that MIC of cold methanol extracts of the leaf of Acacia arabica was 0.6 mg/ml against E. coli which is very closer to our result.

CONCLUSION: 80% methanol extract of leaf of Acacia etbaica showed antibacterial activity against Staphylococcus aureus and Escherichia coli. The results suggest that the methanol extracts of Acacia etbaica could be a rich source of antibacterial compounds against Staphylococcus aureus and Escherichia coli. The results also provide a scientific basis for the traditional use of Acacia etbaica by the local communities. Therefore, further studies should be conducted to isolate or fractionate the active components of the plant having an antibacterial effect.  Moreover; in- vivo studies on this plant are needed to determine its effectiveness, toxicity, and side effects.

ACKNOWLEDGEMENT: This research partly received financial support from the Ministry of Education (Ethiopia) with Grant No. CVM/RB/10/ 2013. The authors are very grateful to College of Veterinary Medicine, Mekelle University for allowing us to use all the necessary facilities to conduct this research and College of Medicine, Department of Pharmacy, Mekelle University for the extraction of the plant.

B. Getachew *, S. Getachew, B. Mengiste and A. Mekuria