INTRODUCTION: Curcuma is a genus of family Zingiberaceae, many species are important in Sri Lankan traditional medicine. Since the morphological similarity of Curcuma species, pharmacognostical evaluation is useful in the identification of Curcuma species. DNA sequencing is one of the reliable methods in biological identification 1. DNA barcode of each species belongs distinct pattern, especially MaturaseK (matK) gene of the chloroplast, can be used to show as separate group 2, 3. Phylogenetic analysis of the matK coding and noncoding regions is used to derive relationship among genera 4.

Biological diversity in plant species is evidenced by a phylogenetic tree. The main objective of this study was to differentiate Curcuma species grown in Sri Lanka using DNA barcode. Due to the stability of the DNA pattern of each species, the authentication by DNA barcode is a reliable method to identify similar plant raw materials. DNA barcoding method in identification of authentic raw-material is a reliable method since it is based on the macromolecular level which is not mutating by external environment factors 5.

MATERIAL AND METHODS: DNA extraction, the analysis was done according to methodology explained by Wijayasiriwardene 3. Multiple alignments were performed using a built-in CLUSTAL W and aligned sequences were edited by molecular evolutionary genetics analysis (MEGA) version 7.0. Evolutionary analyses were conducted in MEGA7 6. Tajima test statistic 7 was performed according to Nei 8.

The phylogenetic tree was obtained using the Neighbor-Joining method 8. The sum of branch length was computed using the maximum composite likelihood method 9. The genetic distance was calculated based on the Kimura-2-parameter model 10. All positions containing gaps and missing data were eliminated by multiple alignments.

Thymine nucleotide percentage of C. oligantha of matK was significantly higher (44%) at the uncoded position than other four species. Phylogenetic tree of the matK gene of Curcuma was shown in Fig. 1. The optimal tree with the sum of branch length was 0.0135. There were a total of 522 positions in the final dataset. 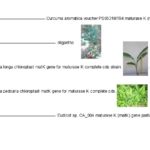 Results of Tajima’s Neutrality test were mentioned in Table 3.

CONCLUSION: Phylogenetically, C. albiflora appears as a different group as per the Neighbor-Joining method and therefore, it can be identified as a new group. Therefore, DNA barcoding study provided reliable proof to identify C. albiflora from other Curcuma species.