ABSTRACT: Moxifloxacin is a broad-spectrum antibiotic. Moxifloxacin is a 4th generation fluoroquinolone. Chemically it is 8-methoxy-fluoroquinolone. It acts by inhibiting DNA gyrase, a type topoisomerase II and topoisomerase IV. These are enzymes which are necessary for separation of bacterial DNA, so inhibits the replication of the cell. Its study was based on single-drug delivery, intravenous. The apparatus which have been used is a reversed-phase Li Christopher RP-18 with a column and a mobile phase comprising different solvents. Fluorescence detection was carried out at a higher wavelength of 290 nm and an emission wavelength of 550 nm. This method causes a short retention time (8.0 min) for moxifloxacin. The linear curves were obtained from 5-250 μg/L in plasma and from 0.1-2.5 μg/g of brain tissue. Limit of quantification (LOD) was 5 μg/L in plasma and 0.1 μg/g in brain tissue. The method causes the detection of systemic antimicrobial agents in plasma and CNS of infected mice by Listeria monocytogenes.

INTRODUCTION: Moxifloxacin is a fluoro-quinolone molecule with a broad antibacterial spectrum of activity 1. Listeria monocytogenes is a gram-positive bacterium it is widespread in the environment 1. It is a facultative intracellular food-borne pathogen and causes severe infections, especially septicemia, abortions, and CNS infections 2. Listeriosis mainly occurs in high-risk groups, including individuals with severe underlying diseases or with impaired immunity 3. Significantly moxifloxacin has rapid bactericidal activity against extracellular and intracellular bacteria 4. Moreover, it was determined minimal inhibitory concentrations (MIC) for a large collection of L. monocytogenes strains and did not detect any who were resistant; their origin is not considered 1.

Parameters Used in HPLC Method Validation: Precision, determination range, quantization range, straight line, accuracy, repeated reproduction, re-establishment, the stability of sample solution and specificity. The accuracy is the proximity of the test results. Accuracy should be recognized across its range. Accuracy is assessed by using a minimum of 9 determinations.

The value which is recommended for accuracy and precision is ± 15%, excluding for the ± 20% which is the lower limit of quantification average and standard differences were calculated. Precision is calculated by using the coefficient of variation 7. QC samples were separately prepared from the calibration standards. The sample solutions have three dissimilar moxifloxacin quantity; close to the lower, mid and upper limit of quantification (LOQ) straight line was obtained by scheming measurement of curves in plasma and in copied three-part different runs. The calculation was made by different quantities of moxifloxacin in brain tissues and plasma with sample solutions: involving 5 ug/L and 250 μg/L and involving 0.1 and 2.5 μg/g for the brain. The curved lines were fixed by a straight line regression system for the calibration of maximum area value of this antibiotic in the in-vivo standard solution. Drug (Moxifloxacin) stability seen in analyzing replicates at three different samples.

These methods are used in regards to receipt criteria of industrial principle to the bio-investigative validation 7. The value which is suggested for accuracy and precision is ± 15%, except for the lower limit of quantification for which lower LOQ ± 20% is up to standard. The average and standard difference were calibrated. Precision is calculated by using the coefficient of variation (CV). Stability is tested at the initial and at the end of the sample injection time limit of 15 h, at temp 9 °C but beta-lactam stability was founded in patient‘s plasma at 4 °C at room temperature for 12 h.

Moxifloxacin is a broad spectrum fluoroquinolone having antibacterial activity against gram+ve bacteria Listeria monocytogenes which is common in the atmosphere. It causes severe infections and facultative intracellular bacteria that is food-borne 1. Listeriosis mostly occurs in persons with insensitive basic diseases or having a less strong immune system. Moxifloxacin has fast antibacterial action not in support of in-vitro and in-vivo L. monocytogenes 1. As a result, moxifloxacin could be well thought out much competent as compared to amoxicillin, against L. monocytogenes. To evaluate the specificity of moxifloxacin in this murine, pharmacokinetic study of this fluoroquinolone was essential in plasma.

Some results can even be deceptive. Though, no bioanalytical testing has been done to find out moxifloxacin quantity in brain tissues. Therefore, we promote a High - Performance Liquid Chromatographic technique for the purpose to find out moxifloxacin concentration in plasma as well as in brain tissue. Our methodology was then utilized to validate the pharmacokinetic aspects of moxifloxacin in brain and plasma in an evaluated murine model of central nervous system 1, 5.

Following the assay conditions, moxifloxacin was taken from the in-vivo standard retention time was 8 min. The chromatographic papers taken from the examination of two empty matrixes reveal no invasive peaks with the same times. Straight line curve was experimental in moxifloxacin analysis from brain and plasma (r2 = 0.999) on the validated quantity limits. Good results were taken for accuracy (99.2–111.5%; 94.8–106.2%) and precision (CV < 10%; CV < 5%) for brain tissue and plasma. Reproducibility of moxifloxacin plasma concentration Table 1 and drug quantity in brain tissue Table 2 calculation: test performance data (n=6)

Citric buffer consisted of 25mM citric acid, 10mM sodium dodecyl sulfate and 10mM TBABr in 500mL water and the pH was set at 3.5 by 0.1 M NaOH 8. Stationary phase Atlantis T3 analytical column used for the separation (4.6 mm, 5μm), it is coupled with an Atlantis T3 guard column (4.6 mm, 5μm). The mobile phase is firstly filtered and then degassed by degasser, consist of 10Mm phosphoric acid solution and pH is adjusted at 2 with hydrochloric acid and acetonitrile.

A linear gradient from 7% to 19% acetonitrile in 6 min and 19% to 49% from 6 to 16 min was used using a flow rate of 2 ml/min. Run time was delayed to 22 min to go back early point. It was monitored at 210 nm for cloxacillin, at 230 nm for amoxicillin, at 298 nm for imipenem and meropenem then recorded the data. The quantification was based on the peak height of each compound. The baseline is inspected and adjusted visually and manually.

Instrumentation: HPLC examination was performed on an organization that having a thermostat (at 25 °C) 717 plus autosampler waters, degasser, a pump, and a fluorescence detector. Departure was performed via a stage (phase) which is reversed Lichrospher is a column having carbon number 18 (5 μm). All data were analyzed using Chrome eon.  We used a buffer solution act as the mobile phase. It has a pH of 3.5 and prepared by methanol-acetonitrile-buffer (3:40:57) having the run speed of 1.0 ml per minute. By using excitation wavelength and emission wavelength 290 nm and 550 nm respectively were carried out for findings (fluorescence).

Sample Preparation: In the case of moxifloxacin 100 μl of plasma is taken and then add working standard internal solution 20 μl for the brain (in 0.5 milliliters of water 0.5g crumpled). Then testers were deproteinized with the help of 100 μl acetonitrile. Then for 10 min at 3000 rpm centrifuge the samples. 400 µl of sterile water was adding in 100 µl supernatant. Then 20 µl of this solution is injected into the system of HPLC. We mixed the ciprofloxacin soln 20 μl to 100 μl for the brain. Then, repeat the above injecting technique for plasma samples.

For beta-lactam antibiotics prepare a stock solution and stockpiled at -80 °C. To prepare a standard solution of 10μg/ml, mixed with water to acquire a 1-mg/ml. 3operational soln. of beta-lactam were prepared from stock soln and diluted 10-folds in complete plasma. Then take plasma in heparin zed tubes and transported to ice and centrifuge for 10 min at 4 °C. 700μl and 20μl of water added to the 100 μl patient plasma sample. Each sample was assorted and centrifuged. 900 μl of water is used to dilute 100 micro liters of the supernatant. 20 μl were inoculated into the system. These dilutions provide the same percentage of acetonitrile as an early condition of the linear gradient.

Experimental Models: 7-8 weeks old female mice were used. The bacteriologist in the laboratory used to stimulate listeriosis in 3 mice. The mice had weighed 23-27ĝ. And afterward injected intra-venously using the tangential in the vein of tail 105L × 1. Intraperitoneal injection of a drug (50 mg/kg) was injected in the mice, at 36 h after infection.

Pharmacokinetic Analysis: In the mouse plasma and brain, the pharmacokinetic profiles were examined after administering a single dose of moxifloxacin. Moxicon were deliberated from specimens collected at zero, five, fifteen, thirty, sixty, 120, 240, 360, and 480 min after 1st dose. Six mice from every group were slater on every sampling time. Concentration-time data were examined using a non-compartmental model with first-order elimination and zero-order absorption through a nonlinear least squares method.

Pharmacokinetic limitations were anticipated via consistent techniques. After directly review of investigational concentrations time curves highest brain and plasma concentrations (Cmax) were determined. We determined the AUC via Trapezoidal rule until determining the variation of last pharmacokinetic parameter between control and infected mice. Results are stated as means ± S.D. The procedures defined above were employed in the determination of mean moxifloxacin concentrations.

In plasma, for diseased mice, the moxiv Cmax for controlled and infected group 6.7 ± 1.2 mg/L, 17.3 ± 6.6 mg/L respectively. After intraperitoneal administration of moxifloxacin con in brain, tissues was quickly perceived within 5 min and peaked point at 1.8-2.2 μg/g as compared with 0.5-1.1 μg/g in the control group within 60 min.

We decided, confirm the method using ciprofloxacin as an internal standard owing to the extraction efficiency 9. Parting was accomplished by ion-pairing reversed-phase chromatography with a 10 mili-Mole (mM) strength of SDS 10. Liang exposed that over this strength, resolution of fluoroquinolone was not upgraded and column equilibrium time was ideal.

TBABr was mixed at the strength of 10mM to rise resolution between Moxi and Cipro and to increase the peak nature 1, 10. The pH of the mobile phase was fixed at 3.5 with citric acid buffer solution at strength of 25mM. Lastly, the adjusted mobile phase comprised of 10mM TBABr, 10mM SDS, 3% methanol, 25mM citric acid, 40 percent acetonitrile at 3.5pH. Moxi and Cipro have more sensitivity and specificity for fluorescence detection than ultraviolet detection that’s why it is used.

Moxifloxacin was administered by Wise et al., in control and infected mice and was detected in the brain after 6 and 8 h respectively 5, 12 beta-lactam antibiotics were separated at wavelength 210, 230, and 298 nm. Mobile phase absorbed UV which results in variation from baseline. Another method was used in which polar drugs were retained, and non-polar drugs were eluted. Mobile phase pH also effects the retention time. Drugs were well separated at acidic pH.  Increase in pH decreases the retention time. 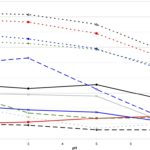 These compounds were separated in 22 min. Imipenem shows the phenomenon of tautomerism due to which 2 peaks were obtained which were not resolved even on making dilutions with a buffer of different pH 16. The 1st peak is considered as plasma concentration peak. When a graph is plotted between retention time and mobile phase pH, linear line of cefepime, ceftazidime, amoxicillin, cefotaxime, meropenem, and imipenem is obtained at a concentration of 2-250 g/ml and of penicillin G, amoxicillin, piperacillin, cloxacillin and ceftriaxone at a concentration of 5-250 g/ml 17, 18.

CONCLUSION: We authorized and developed HPLC method for moxifloxacin in brain and plasma, and its entrance in CNS was verified. We recommended that any infection may alter the pharmacokinetic data of the moxifloxacin as expected. Penetration of drug in the infectious tissue is much more than healthy tissue when the concentration of the drug is increased. This method can also be used for quantification of the drug in other body organs and diseases. It is a quick method and used for quantification of antibiotics in plasma in daily life, e.g., use for TDM.