INTRODUCTION: Liver is a very important organ in the human body. It regulates metabolic functions such as detoxification and plays a vital role in biochemical conversion. During the process of elimination, there is a chance of different accumulation kinds of toxic materials inside the hepatocytes, and there is a chance of liver infection, and hepatic disorders such as hepatitis 1. Liver diseases caused by various toxic chemicals, chemotherapeutic agents, excessive consumption of alcohol and microorganisms.

Hepatotoxicity is an acute adverse effect in the liver is caused by over dosages of drugs, toxic chemicals, viruses, bacteria and parasites 2. Hepatotoxicity is a slight change in hepatic structure and function which may result in hypertension, ascites, jaundice, increased bleeding and cause multiple metabolic changes affecting other organs 3, 4. The magnitude of derangement of the liver by disease or hepatotoxin is generally measured by the level of glutamate pyruvate transaminase (ALT), glutamate oxaloacetate transaminase (AST), alkaline phosphatase (ALP), bilirubin, albumin, and whole liver homogenate 4, 5.

CCl4 is a widely used industrial chemical and a potent hepatotoxin. It induces hepatotoxicity by producing free radical, putting oxidative stress hence causing lipid peroxidation in liver tissues, consequently necrotic liver damage 6, 7. Liver diseases such as hepatitis, cirrhosis and fatty liver are worldwide. Various commercial synthetic drugs are used to treat liver disorders also cause side effect on the liver. Hence, herbal drugs have become increasingly popular and their use is widespread. Herbal medicines have been used in the treatment of liver diseases for a long time. In India, numerous medicinal plants are used for the treatment of liver disorders 8. Hepatoprotective effect of some plants like Spirulina maxima 9 Eclipta alba 10, Boehmeria nivea 11, Cichorium intybus 12, and Picrorhiza kurroa 13, Boswellia serrata 4, Psidium quajava 14, Coccinia indica 15 has been well documented.

Sesbania grandifloraa Fig. 1 fast-growing tree belongs to the family, Fabaceae, is commonly known as agathi in regional language Tamil. The leaves, used as greens for cattle and poultry, have got anthelmintic property against selected helminths 16, 17. The bark, leaves, flowers, and roots are also used medically herbs distributed in the tropical regions of the globe 18. Juice of leaves and flowers is a popular remedy for nasal catarrh and headache when it is sniffed up the nostrils. Juice of the flowers is squeezed into the eyes to relieve the dimness of vision. 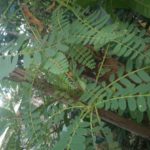 Juice of flower is ideal as expectorant 19. The leaves of the plant have been reported to have anxiolytic and anticonvulsant effect while the flowers have been reported to have anti-microbial activity 20. It shows hypolipemic, anti-ulcer and anti-inflammatory properties as well. Therefore, to justify the traditional claims, we have assessed the hepatoprotective effect of Sesbania grandiflora leaves extract in Albino rats using biochemical enzyme based analysis.

Preparation of Plant Extracts: Sesbania grandiflora leaves were collected and shade dried at room temperature.  The shade dried leaves were powdered and extracted by using aqueous, ethanol and acetone. Aqueous extracts were prepared by subjecting a 100 g of dried powdered leaves into 100 ml of distilled water and incubated in water bath shaker for 12 h at 40 °C. Ethanol and acetone extract prepared by the coarsely powdered leaves was extracted using Soxhlet and extracted with 80 % ethanol and 70 % acetone for 24 h at 60 °C and 55 °C, respectively. The extracted were collected and concentrated by drying under vacuum, and semisolid suspensions were obtained. These suspensions were used to assess hepatoprotective activity.

Experimental Design for Hepatoprotective Activity of Sesbania grandiflora: Adult male Wister albino rats maintained at the college weighing between 150-170g were used for the hepatoprotective studies. Animals were divided into six groups in six rats each:

Silymarin was used as a positive control for comparing the hepatoprotective potential of different leaves extract of Sesbania grandiflora.

Collection of Blood and Biochemical Analysis: On the 8th day, all the animals were sacrificed, and blood samples were collected in glass tube from retro-orbital puncture to obtain hemolysis for 30 min at 37 °C. Serum glutamate oxaloacetate transaminase, serum glutamate pyruvate trans-aminase, serum bilirubin, and alkaline phosphatase and Serum protein 21, 22 were obtained from serum following centrifugation process was used for the biochemical analysis.

Liver Homogenate Preparation: Liver homogenates were prepared by using a 100mM KCl buffer (pH7.0) containing 0.3mM EDTA and centrifuged at 6000 rpm for 45 min at 4 °C. After completion of the centrifugation process, collect the supernatant was used for estimation of antioxidant levels were analyzed superoxide dismutase (SOD) 23, catalase (CAT) 24 and glutathione peroxidase (GP) 25.

RESULTS AND DISCUSSION: The hepato-protective and antioxidant activity of S. grandiflora leaves extracts are shown in Fig. 2-4. The biochemical parameters such as serum glutamate oxaloacetate transaminase, serum glutamate pyruvate transaminase, serum bilirubin, and alkaline phosphatase were estimated to assess the liver function. The marked increase in SGOT, SGPT, and ALP levels were observed in CCl4 treated group II animals are 94.98 ± 0.69, 29.98 ± 0.67 and 299.68 ± 0.12 IU/L, respectively. The increased level of SGOT, SGPT, ALP, and bilirubin is a conventional indicator of liver injury. 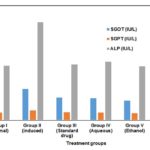 However, these levels were reversed to near normal levels of group I animals with the treatment of aqueous, ethanol and acetone extract of Sesbania grandiflora, which are statistically significant. The activities of extracts were comparable to a standard drug. These extracts have restored all the biochemical parameters levels in serum. And also the standard silymarin has restored the biochemical levels of SGOT, SGPT, and ALP significantly (P<0.01), i.e. 69.42 ± 0.38, 24.42 ± 0.33, and 170.12 ± 0.25 IU/L respectively in serum. In the case of bilirubin and total protein, there was a noticeable increase, i.e. in serum levels treating with CCl4. Treatment with aqueous, ethanol and acetone extract has reversed the serum bilirubin and total protein in serum levels to (0.50 ± 0.07 and 6.85 ± 0.12 mg/dl), (0.45±0.09 and 6.59 ± 0.32 mg/dl), (0.47 ± 1.06 and 6.26 ± 1.07 mg/dl), respectively which are statistically highly significant (P<0.001) when compared with CCl4 treated animals. The restoration of biochemical factors in serum was also noticed in treating with the standard drug silymarin (0.49 ± 0.04 and 6.26 ± 0.16 mg/dl). It is stipulated that the extract treated group was protected from hepatic cell damage caused by CCl4 induction. 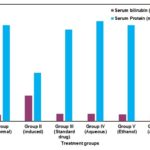 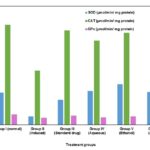 The extract at a dose of 300 mg/kg body wt. exhibited orally, the significant protective effect by lowering the serum levels of transaminases (SGOT and SGPT), bilirubin and alkaline phosphatase (ALP). The effects produced were comparable to that of standard hepatoprotective agent silymarin. In ethanol extract treated animals; the toxicity effect of carbon tetrachloride was controlled significantly by restoration of the levels of serum bilirubin and enzymes as compared to the normal and standard drug silymarin-treated groups. Antioxidant activities of hepatic SOD, CAT and GPx were estimated and shown in Table 3, Fig. 4 SOD, CAT, and GPx activities were significantly (p<0.001) enhanced only in the orally received ethanol extract of S. grandiflora leaves. The antioxidant activities of aqueous, ethanol and acetone extract show significant activity near to the normal group of animals.

CONCLUSION: In the present report stated that the aqueous, ethanol and acetone extract of commonly available plant Sesbania grandiflora leaves was extensively investigated for its hepatoprotective potential against CCl4 induced hepatotoxicity. There was a significant increase in serum levels of bilirubin, alanine transaminase, aspartate transaminase and alkaline phosphatase with a decrease in total protein level, in the CCl4 treated animals, reflecting liver injury.

In the extracts treated animals, there was a decrease in serum levels of the markers and a significant increase in total protein, indicating the recovery of hepatic cells. A strong conclusion can be drawn that, extract of Sesbania grandiflora possess the most significant (P<0.001) hepatoprotective activity compared with the standard drug silymarin so that the development of medicines using the extracts of plant materials or bioactive compounds with standards of safety and efficacy can revitalize the treatment of liver disorders and hepato-protective activity.