INTRODUCTION: The liver is the key organ regulating homeostasis in the body. It is involved with almost all the biochemical pathways related to growth, fight against diseases, nutrient supply, energy provision, and reproduction 1. The liver is expected not only to perform physiological functions but also to protect against the hazards of harmful drugs and chemicals. In spite of tremendous scientific advancement in the field of hematology in recent years, liver problems are on the rise.

Jaundice and hepatitis are two major hepatic disorders that account for a high death rate 2. Presently only a few hepatoprotective drugs and that too from natural sources are available for the treatment of liver disorders 3. Morus alba Linn (Moraceae) is also known as Tut in India. The white mulberry has a long history of medicinal use in Chinese medicine; almost all parts of the plant are used in one way or another.

Recent research has shown improvements in elephantiasis when treated with leaf extract injections and in tetanus oral doses of the sap mixed with sugar 4. The fruit has a tonic effect on kidneys 5. It is used in the treatment of urinary incontinence, dizziness, tinnitus, insomnia due to anemia, neurasthenia, hypertension, diabetes, premature graying of the hair, and constipation in the elderly 6.

The leaves are showing analgesic and anti-inflammatory activity of hydroalcoholic extract of leaves 7. Phytochemical review shows the presence of tannins, Vitamin A, flavonoid, thiamine, protein, carbohydrates 8. It has been used in the indigenous system of medicine for cooling, acrid, purgative, diuretic, laxative, anthelmintic, brain tonic, anti-bacterial, hepatopathy properties. They are useful in vitiated conditions of vata and pitta, burning sensation 9.

Hence the present study was aimed to investigate the hepatoprotective activity of alcoholic leaves extracts of Morus alba L. against paracetamol-induced hepatitis in rats

Plant Collection and Authentication: The leaves of Morus alba Linn. were collected from Ramling mudgad Dist.-Latur (Maharashtra); were authenticated by Dr. Harsha Hegade. Research officer Indian Council of Medical Research, Belgaum. A voucher specimen has been deposited at the herbarium of RMRC-465.

Preparation of Extracts: The plant material (leaves) were dried for several days and powdered with the help of an electric grinder. The course material was extracted in a Soxhlet extractor with alcohol (90%) and aqueous. The extracts were dried at 50 ºC in a water bath. The percentage yields of the alcoholic extract are 8.231%, and the aqueous extract is 11.10%.

Chemicals: Liv-52 obtained from Himalaya drug, Bangalore. All other chemicals used were of analytical grade.

Experimental Animals: Swiss albino mice (18-20 g) and Wistar rats (150–200 g) of either sex were procured from Sri Venkateshwara Enterprises, Bangalore, and were acclimatized for 10 days under standard housing condition maintained at a room temperature of 24 ± 1 ºC; related humidity 45-55% with 12:12 h light/dark cycle. The animals were habituated to laboratory conditions for 48 hrs prior to the experimental protocol to minimize any nonspecific stress.

The animals were fasted for 3 h prior to the experiment and were administered with a single dose of extracts dissolved in 2% w/v Tween 80 and observed for mortality for upto 48 hours.

Based on the short-term toxicity, the dose of next animal was determined as per OECD guidelines 10. All the animals were also observed for long-term toxicity. The LD50 of the test extracts was calculated using ‘AOT 425’ software provided by Environmental Protection Agency, USA.

Hepatoprotective Activity: The method of S. Ramachandra S et al., was used in the study. Animals were divided into seven groups of 6 animals each. The first group received saline 1 ml/kg for one week (control).

On the fifth day, after the administration of the respective treatments, all the animals of groups II, III, IV, V, VI and VII were administered with paracetamol 2 g/kg orally. On the seventh day after 2 h of respective treatments the blood samples were collected for the estimation of biochemical marker enzymes. Then animals under ether anesthesia were sacrificed. The livers from all the animals were collected, washed and used for the estimation 11.

Blood Biochemistry: Blood samples were collected in glass tube from retro orbital puncture to obtain haemolysis-free clear serum for the analysis of SGOT and SGPT12. ALP13. and Bilirubin 14 by standard method.

Histopathology: Histopathology of the liver was carried out by a modified of Luna 15.  In brief, the autopsied livers were washed in normal saline and fixed in 10% formalin for 2 days, followed with bovine solution for 6 h. Then the livers were paraffin-embedded, and 5 µ thickness microtone sections made 16. The section was processed in alcohol-xylene series and stained with haemato-xylin and eosin. The slides were studied under a light microscope for any histological damage/ protection.

Statistical Analysis: The data obtained were analyzed by One Way analysis of variance (ANOVA) followed by Tukey’s multiple comparison test using a computerized program. P-value <0.05 or was taken as the criterion of significance.

Hepatocytes of the normal control group showed normal lobular architecture of the liver. In the Paracetamol treated group, the liver showed microvascular fatty changes, and the hepatocytes were surrounded by large No. of fat droplets; Liv-52, ALE, and AQE pretreated groups showed minimal fatty changes Fig. 1 and their lobular architecture was normal, indicating the hepato-protective effect of these extracts. However, ALE showed more microvascular fatty changes Fig.1 than AQE. The hepatoprotective activity of the extracts was in the order of Liv 52 > ALE > AQE. 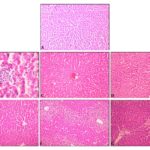 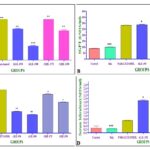 DISCUSSION: The liver can be injured by many chemicals and drugs. In the present study, Paracetamol was selected as a hepatotoxicant to induce liver damage since it is clinically relevant. Paracetamol produces a constellation of dose-related deleterious effects in the liver 17.

During hepatic damage, cellular enzymes like SGOT, SGPT, ALP and serum Bilirubin present in the liver cell, leak into the serum, resulting in an increase concentration 18. Histological changes such as steatosis (fatty changes in hepatocytes) and perivenular fibrosis were observed in paracetamol control group. Both the extracts prevented these histological changes, further indicating their hepatoprotective activity. All the histological changes observed were in correlation with the biochemical and functional parameters of the liver.

It can be concluded that Morus alba leaves extracts viz. ALE and AQE possess a protective effect against Paracetamol-induced hepatotoxicity in rats, but ALE shows a more significant effect as evidenced by the biochemical, functional, and histological parameters.

ACKNOWLEDGEMENT: We are thankful to the President and Principal, VDF School of Pharmacy, Latur, for providing the facilities to carry out the research work.