GC-MS ANALYSIS OF THE METHYLENE CHLORIDE AND n-BUTANOL FRACTIONS OF THE METHANOLIC EXTRACT OF ANTIGONON LEPTOPUS (HOOK & ARN.)

GC-MS ANALYSIS OF THE METHYLENE CHLORIDE AND n-BUTANOL FRACTIONS OF THE METHANOLIC EXTRACT OF ANTIGONON LEPTOPUS (HOOK & ARN.)

ABSTRACT: Antigonon leptopus Hook & Arn. (family Polygonaceae), also called: chain of love, Queen’s wreath and Mexican creeper is a fast-growing vine with stems reaching up to 20 feet long. It has heart-shaped, green leaves climbing by tendrils which wrap around many types of supports. It is native to Mexico and commonly found in tropical Asia, Africa, the Caribbean, and the Americas. It possesses anticoagulant activity, analgesic, antithrombin, anti-inflammatory, antidiabetic, and anti-depressant activities. Aerial parts of the vine have been used as hepatoprotective and for spleen disorders. During the current study, the GC-MS experiment was conducted on both the methylene chloride and n-butanol fractions of the methanolic extract of the aerial parts of the vine. Results revealed the identification of total thirty-five (35) and thirty-seven (37) compounds respectively in both fractions examined. Compounds were characterized by their retention times, mass spectra with comparison to online mass bank database. The presence of flavonoids, phenolic acids, coumarins, and organic acids in both fractions examined may be responsible for its wide pharmacological actions.

INTRODUCTION: Antigonon leptopus, is one of the species of belonging to the buckwheat family, Polygonaceae. It is native to Mexico, India and commonly found in tropical Asia, Africa, the Caribbean, and the Americas. It is known as the coral vine or Mexican creeper. It is a fast-growing vine with the stems reaching 20 feet long. It climbs by tendrils which wrap around many types of supports. The tea prepared from the aerial portion of A. leptopus is used for the prevention and treatment of cough, sore throat, flu, and menstrual pains.

Flowers are used to treating high blood pressure. Leaves possess anti-coagulant, analgesic, anti-thrombin, anti-inflammatory, and antidiabetic activities. Also, they have been used as hepato-protective, treating asthma, liver and spleen disorders 1 - 7. There is no such detailed study on the exploration of bioactive compounds using GC-MS (Gas chromatography/Mass spectrometry) of the methylene chloride and n-butanol fractions of the methanolic extract of the aerial parts of the vine.

Plant Collection: Samples of  Antigonon leptopus used in this study were collected from “El-Zohreya” Park, Cairo, Egypt during the flowering stage (Spring 2012). A flowering branch was kindly authenticated by Mrs. Terase Labib, plant taxonomist of Orman garden, Giza, Egypt. The voucher specimen has been deposited in the herbarium of Department of Pharmacognosy, Faculty of Pharmacy, Cairo University “20.12.15.1”.

Extraction of Plant Material and Preparing the Fractions: The air-dried powder of the aerial parts of A. leptopus (400 gm) was extracted using methanol 70 % with percolation (cold extraction technique) till exhaustion (4 × 4 L). The solvent was evaporated under reduced pressure at 60 oC, using a rotary evaporator and the residue was used for successive liquid-liquid fractionation. Total weight of the dried methanol residue was 60 g (15% w:w). The air-dried methanolic extract (60 g) was suspended in distilled water (100 ml) and subjected to liquid-liquid fractionation with solvents of increasing polarity; petroleum ether (12 g), methylene chloride (0.7 g), ethyl acetate (2.8 g) and n-butanol (1.7 g) respectively. The obtained solvents were evaporated in each case under reduced pressure at 45 °C using rotary evaporator.

Sample Preparation: One-half gram (0.5 gm) of the methylene chloride and n-butanol fractions of the methanolic extract of the aerial parts of the methanolic extract prepared, each separately was dissolved in 1 ml methanol 70 %. The sample was then filtered along with sodium sulfate to remove traces of water. The filtrate is then concentrated to 1 ml by bubbling nitrogen into the solution. Each sample 1 μl was then employed into the GC-MS unit, to carry on the GC-MS analysis.

Gas Chromatography/Mass Spectrometry (GC-MS) Analysis: The analysis of the both fractions was performed on a GC-MS equipment (Trace GC 1310-ISQ mass spectrometer (Thermo Scientific, Austin, TX, USA) with a direct capillary column TG, dimensions (30 m), ID: 0.25 mm, film thickness: 0.25μm and equipped with elite 5 MS (5% di-phenyl / 95% dimethyl polysiloxane). The flow rate of mobile phase (carrier gas: He) was set at 1.0 ml/min. In the gas chromatography part, injector temperature programme was 50 °C and raised to 300 °C by 10 °C /min to 150 °C withhold 2 min, then increased to 300 °C with 5 °C /min and hold for 5 min. The solvent delay was 3 min, and diluted samples of 1 µl were injected automatically using an autosampler “AS3000” coupled with GC in the split mode. Detector temperature was set at 250 °C and EI mass spectra were collected at 70 eV ionization voltages over the range of m/z 50-650 in full scan mode. The ion source and transfer line temperatures were set at 200 and 300 °C respectively. The components were identified by comparison of their retention times and mass spectra with those of online mass bank database. The GC-MS chromatograms and total compounds identified of both fractions are illustrated in Fig. 1 and 2. 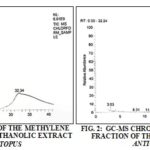 GC-MS Analysis: The GC-MS analysis study of both the methylene chloride and n-butanol fractions of the methanolic extract of the aerial parts of Antigonon leptopus, comprises various bio-active compounds (35 and 37 compounds respectively). These compounds were identified through mass spectrometry attached with the GC. The GC-MS chromatograms and total compounds identified of both fractions are illustrated in Fig. 1 and 2 and displayed in Table 1 and 2 respectively. The mass spectrometer analyzes the compounds eluted at different times to identify the nature of the compounds. Mass spectra of the identified compounds were compared to that of the online mass bank database.

TABLE 1: GC-MS ANALYSIS OF THE METHYLENE CHLORIDE FRACTION OF THE METHANOLIC EXTRACT OF ANTIGONON LEPTOPUS

TABLE 2: GC-MS ANALYSIS OF THE OF  THE n-BUTANOL FRACTION OF  THE METHANOLIC EXTRACT OF ANTIGONON LEPTOPUS

CONCLUSION: The GC-MS analysis report of both methylene chloride and n-butanol examined fractions of the methanolic extract of the aerial parts of Antigonon leptopus vine, showed the presence of flavonoids mainly: flavones, flavonols, flavanones, phenolic acids, coumarins, and organic acids. All these various bio-active compounds might be responsible for its wide pharmacological actions. Further research should be done to isolate and purify these compounds for their valuable uses.

ACKNOWLEDGEMENT: The author is thankful to the Department of Pharmacognosy, Faculty of Pharmacy, Cairo University for all the facilities provided. Special thanks are owed to the Egyptian Atomic Energy Authority (EAEA), Nasr City, Cairo, Egypt, for carrying out GC-MS analysis of the sample.