ABSTRACT: The objective of this review is to update and assess the chemistry, composition, mechanism of action, pharmacokinetics, nutritional value and toxicology of garlic.  The medicinal properties of garlic include immune functions, antibacterial activities, antifungal activities, antivirus activities, de-toxification, anti-oxidant agent, prevent platelet aggregation, reduction in blood pressure, lowering of cholesterol and triglyceride, prevention of arteriosclerosis, antithrombotic, anticancer effects. The scientific research shows that the wide variety of dietary and medicinal functions of garlic can be attributed to the sulfur compounds present in or produced from garlic. Chemical analysis of garlic cloves has revealed a concentration of sulfur-containing compounds (1-3%). Although garlic produces a large number of sulfide compounds from a few sulfur-containing amino acids, their functions are different from one another like allicin, diallyl, mono, di, tri, tetra, hexa and hepta sulfides, vinyldithiins and ajoenes., Allyl, propyl disulfide and other organic sulfide or sulfur compounds diallyl disulfide, allinase, alliin(S-allyl cysteine sulphoxide).

INTRODUCTION: Garlic has been used in tradi-tional Chinese medicine for indigestion, diarrhea, cholera and in Ayurveda for fevers, headache including those of an intermittent nature, dyspepsia and debilitated conditions 1. In China, garlic was forbidden food for Buddhist monks because of its reputation as a sexual stimulant. Garlic was used by the Greek physicians, Hippocrates and Galen, and during the middle ages by Hildegard von Bingen. In the middle Ages, garlic was used to ward off the evil eye, witches and vampires; it was also used as an aphrodisiac. When the garlic is crushed or otherwise damaged the allin react with enzyme Allinase found naturally in garlic.

Allinase acts as catalyst resulting in the transformation of Allin to Allicin 2. The appearance of dried garlic is light yellowish 3. Formerly garlic classified in the lily (Liliaceae) family, Garlic, Allium sativum, is now a member of the family Alliaceae 4 and includes two basic types (hardneck and softneck) and three recognized varieties. Hardneck garlic, which include A.sativum var. ophioscorodon and A. sativum var. Pekinese, are characterized by hard, woody central stalks that extend down to the basal plate at the bottom of the bulb.

They end up a flower stalk (scape) and umbel covered by a pointed spathe. In the A. sativum var. ophioscorodon variety, the scape curls or loops. The umbel contains a cluster of greenish-white or pink flowers from which aerial cloves called bulbils to develop. Bulbils are generally smaller than cloves but, like cloves, can vary in size and number.

Softneck garlic have a non-woody pseudostem formed from overlapping leaf sheaths and rarely send up a flower stalk unless stressed by climatic conditions. Garlic plants have 6-12 flat, narrow leaves and can reach from just less than 10 inches to over 6 feet in height. Bulbs can range in size from 1.5 to 3 inches in diameter depending on variety and can have from 10 – 20  cloves and 20 -40 cloves well-developed roots of various shapes and sizes (cloves are asymmetric).

Garlic is one of the edible plants which have generated a lot of interest throughout human history as a medicinal panacea. Garlic was among the earliest of cultivated foods and spices, easily identified by primitive food-seekers by their distinctive smell, now known to be associated with organosulfur compounds. The plant has the members of the well known and widely appreciated genus allium, comprising more than 100 different species, other common members being a leek, chive, shallot, and scallion. It is generally grown as an irrigated crop throughout the year. Garlic will tolerate a wide range of soils but prefers a free-draining loam high in organic matter. It can be grown under a wide range of climatic conditions, but it succeeds best in mild climates without extremes of heat and cold. Garlic will grow in almost any well-drained, friable soil. Soils must have a pH above 6.0. The ideal pH for garlic is between 6.5 and 7.0 5, 6.

Common allium species were valued by early civilizations both as important dietary constituents and as medicinals for the treatment of many disorders, The popularity of garlic in folk medicine through the centuries for the treatment of various disorders and it can be attributed to the pungent aroma, strong taste. 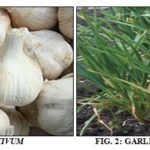 Chemistry of Garlic: Garlic contains at least 33 sulfur compounds 7, several enzymes (Allinase, peroxidase, myrosinase, catalases, superoxide dismutases, arginases, lipases), amino acids (arginine, glutamic acid, asparagic acid, methionine, threonine), proteins (glutamyl peptides) and minerals, vitamins (B1, B2, B6, C and E), biotin, nicotinic acid, trace elements, lipids, prostaglandins, fructan, pectin, adenosine 8. Special attention is given to certain steroid saponins and sapogenins such as β- Chlorogenin β- Chlorogenic is bioavailable in-vivo and detected in blood, this indicates that β- Chlorogenin may be a bioactive compound in garlic. It contains a higher concentration of sulfur compounds than any other Allium species. The sulfur compounds are responsible both for garlic’s pungent odor and many of its medicinal effects. 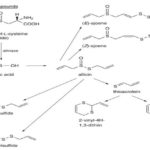 The Composition of Garlic Oil: Garlic oil contains the amino acid Allin (C6H12NO3S) which is odorless and can be converted to a compound called Allicin. When the garlic is crushed the allin react with enzyme allinase found naturally in garlic. Allinase acts as catalyst resulting in the transformation of Allin to Allicin. Garlic contains allicin (C6H10OS2) also known as daily thiosulphate, a powerful antibiotic, and antifungal compound, is a product of the enzymatic reaction. Allicin is a sulfinyl compound that gives garlic its strong odor and flavor.

Mechanism of Action of Allicin: The allicins contained in garlic have a fibrinolytic activity which reduces platelet aggregation by inhibiting prostaglandin E2. Allivium sativum has also exerted some effect on glucose tolerance for both hypo-and hyperglycemia by reducing insulin requirements to control blood sugar. The compounds contained in garlic have also demonstrated their ability to lower total serum cholesterol and triglyceride levels while elevating HDL levels. LDL synthesis is suppressed by garlic.

The pharmacological properties of garlic are mainly to its sulfur-containing compounds. Inhibition of certain thiol-containing enzymes in the microorganisms by the rapid reaction of thiosulfinates with thiol groups was assumed to be the main mechanism involved in the antibiotic effect 14. The main antimicrobial effect of allicin is due to its interaction with important thiol-containing enzymes. In the amoeba parasite, allicin was found to strongly inhibit the cysteine proteinases, alcohol dehydrogenases 15, as well as the thioredoxin reductases which are critical for maintaining the correct redox state within the parasite. Allicin also specifically inhibits other bacterial enzymes such as the acetyl-CoA-forming system, consisting of acetate kinase and phosphotransacetylase-CoA synthetase 16. The condensation product of allicin, ajoene, which has a similar oxygenated sulfur group, has been shown to inhibit the proliferation of Trypanosoma cruzi, possibly by inhibition of phosphatidylcholine biosynthesis 17. Ajoene was also recently shown to inhibit phosphatidylcholine biosynthesis in the human pathogenic fungus Paracoccidioides brasiliensis 18. The inhibition capacities are shown for ajoene suggest that additional microbe-specific enzymes may also be targets for allicin.

Pharmacokinetics of Allicin: Allicin showed a marked first-pass clearance effect in isolated perfused rat liver 19 in rats, alliin and allicin were administered orally at doses of 8 mg/kg 20. Absorption of alliin and allicin was complete after 10 min and 30-60 min, respectively. The mean total urinary and fecal excretion of allicin after 72 h was 85.5% of the dose. No unchanged alliin or allicin was detected in urine, suggesting rapid and extensive metabolism of these constituents 19. Pharmacokinetic studies of the garlic constituent S-allyl-L-cysteine administered orally to rats at doses of 12.5, 25 and 50 mg/kg have reported bioavailability of 64%, 77% and 98%, respectively 21.

Peak plasma concentrations of S-allyl-L-cysteine occurred at one hour, and the half-life of Sallyl- L-cysteine was 2.33 h following oral administration of 50 mg/kg to rats. The pharmacokinetic behavior of S-allyl cysteine (SAC) also studies by Nagae et al., one of the biologically active transformation products from garlic, was investigated after oral administration to rats, mice, and dogs. SAC was rapidly and easily absorbed in the gastrointestinal tract and distributed mainly in plasma, liver, and kidney. The bioavailability was 98.2, 103.0, and 87.2% in rats, mice, and dogs, respectively. SAC was mainly excreted into urine in the N-acetyl form in rats; however, mice excreted both SAC and the N-acetyl form. The half-life of SAC was longer in dogs than in rats and mice.

Toxicology: Garlic is considered to be nontoxic. Adverse effects that have been documented in humans include a burning sensation in the mouth and gastrointestinal tract, nausea, diarrhea, and vomiting. The intravenous LD50 of allicin in mice was determined as 60 mg/kg; when administered subcutaneously the LD50 was 120 mg/kg. For the vast majority of individual’s garlic, onion and leek were nontoxic at the dosages commonly used 22.

Pregnancy and Lactation: Garlic acts as an abortifacient and affect the menstrual cycle and also reported to be proactive 23. Consumption of garlic by lactating women alters the odor of their breast milk and the suckling behavior of their infants 24. Doses of garlic greatly exceeding amounts used in foods should not be taken during pregnancy and lactation.

CONCLUSION: Garlic is a natural form of an antibiotic, angina pain, for example, has been found to be reduced in those who consume garlic on a regular basis. Garlic is a true superfood when it comes to heart disease. Numerous studies have shown that regular consumption of garlic can lower our blood pressure. Preliminary evidence is showing that the allicin in garlic may help to prevent weight gain. Thus, although the evidence supports the benefits of garlic, additional evidence is needed to determine the quantity required by humans to minimize cancer, cardiovascular risks, and hematological diseases, and to provide hepatoprotection and antilipaemic and antimicrobial effects. Allicin in garlic has been found to be a powerful antibacterial and antiviral. Garlic oil may be able to help protect diabetics from developing several major side effects of this disease, including kidney disease, nervous system damage and eye damage. Garlic extract may be able to help prevent heart disease in diabetics. Garlic is considered to be nontoxic. Adverse effects that have been documented in humans include a burning sensation in the mouth and gastrointestinal tract, nausea, diarrhea, and vomiting.

CONFLICT OF INTEREST: There is no conflict of interest to declare.