ABSTRACT: The purpose of this research work was to develop and evaluate matrix-type transdermal patches of Ketoprofen. Employing different ratios of hydrophilic and hydrophobic polymers by a solvent evaporation technique. The physicochemical compatibility of the drug and the polymers was studied by Infrared Spectroscopy. The results suggested no physicochemical incompatibility between the drug and the polymers. Seven formulations (Consisting of hydroxypropyl methylcellulose E5 and ethylcellulose in the ratios of10:0, 0:10, 1:9, 2:8, 3:7, 4:6, 5:5 (F1, F2, F3, F4, F5, F6, F7) were prepared. All formulations carried dimethyl sulfoxide as a penetration enhancer and dibutyl phthalate as a plasticizer in chloroform and methanol (1:1) as the solvent system. The prepared TDDS were evaluated for in-vitro release, moisture absorption, moisture loss, and mechanical properties. The diffusion studies were performed by using modified Franz diffusion cells. Patch coded as F1 (HPMC alone) showed maximum release of 95.526 ± 0.982% in 8 h, whereas F2 (EC alone) showed maximum release of 67.078 ± 1.875% in 24 h and combination of polymers F7 (5:5) showed maximum release of 86.812 ± 0.262% in 24 h, emerging to be ideal formulation for Fenoprofen. The results followed Higuchi kinetics (r2), and the mechanism of release was diffusion mediated.

INTRODUCTION: Transdermal drug delivery systems (TDDS) which can deliver medicines via the skin portal to systemic circulation at a predetermined rate and maintain clinically effective concentrations over a prolonged period. Optimization of drug delivery through human skin is important in modern therapy. With the limitations of oral drug delivery and the pain and needle phobias associated with traditional injections, drug delivery research has focused on the transdermal delivery route.

Delivery of drugs into systemic circulation via skin has generated a lot of interest during the last decade as TDDS offer many advantages over the conventional dosage forms and oral controlled release delivery systems notably avoidance of hepatic first-pass metabolism, decrease in frequency of administration, reduction in gastrointestinal side effects and improves patient compliance.

Ketoprofen, (RS) 2- (3-benzoylphenyl) - propionic acid (Chemical formula C16H14O3) is one of the propionic acid class of nonsteroidal anti-inflammatory drugs (NSAID) with analgesic and antipyretic effects. It acts by inhibiting the body's production of prostaglandin. Ketoprofen's exact mode of action is unknown, but it is thought that prostaglandin synthetase inhibition is involved. Ketoprofen has been shown to inhibit prostaglandin synthetase isolated from bovine seminal vesicles. The purpose of this research work was to develop and evaluate matrix-type transdermal patches of Ketoprofen. They are employing different ratios of hydrophilic and hydrophobic polymers by a solvent evaporation technique.

Preparation of Transdermal Patches: In the present study, drug loaded matrix type transdermal films of Ketoprofen were prepared by a solvent evaporation method. A mold of 5 cm length and 5cm width with a total area of 25 cm2 was fabricated and used. The bottom of the mold was wrapped with aluminium foil, 300 mg of the polymer(s) was accurately weighed and dissolved in 5 ml of chloroform: methanol (1:1) and kept aside to form a clear solution. Dibutyl phthalate was used as plasticizer and dimethyl sulfoxide was used as permeation enhancer as shown in table 5.3 and mixed thoroughly. 30 mg of KF was dissolved in the above solution and mixed for 10 min.

The resulted uniform solution was cast on the aluminium foil and dried at 40 °C in the hot air oven for 24 h. An inverted funnel was placed over the mold to prevent fast evaporation of the solvent. After 24 h the dried films were taken out and stored in a desiccator for further studies.

Determination of Max of Ketoprofen in pH 7.4 Phosphate Buffer Solution: 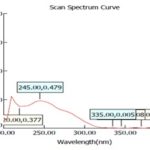 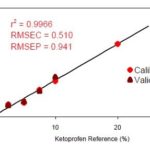 * Each value was an average of three determinations. 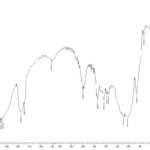 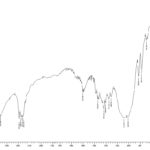 TABLE 12: PERCENTAGE OF DRUG CONTENT OF F1 TO F7 FORMULATION 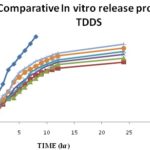 Determination of λmax Ketoprofen in pH 7.4 Phosphate Buffer Solution: The solution containing 10 µg/ml was scanned between 200 - 400 nm.  The λmax was found to be 245 nm, which indicates the purity of sample drug Ketoprofen.

Determination of Solubility: Ketoprofen is freely soluble in water, phosphate buffer pH 7.4, chloroform, methanol, and acetone. The mean concentration of the drug dissolved in the water was 8.11e-02 g/l.

Determination of Partition Coefficient: The partition coefficient value was experimentally found to be 3.7.  The results obtained indicate that the drug possesses sufficient lipophilicity, which fulfills the experiment of formulating the selected drug into a transdermal film.

Physical Appearance: The prepared transdermal patches were transparent, smooth, uniform and flexible. The method adopted for the preparation of the system was found satisfactory.

Thickness Uniformity: With the help of digital caliper, the thickness of the film was measured at different points, and the average thickness was noted. The result indicates that there was no much difference in the thickness within the formulations and it was found to vary from 0.15 ±0.015 to 0.45± 0.011 mm with low standard deviations. The results are given in Table and order of the thickness of films is F4 < F1 < F7 < F2 < F5 < F6 < F3.

Weight Uniformity: Three different films of the individual batch are weighed, and the average weight was calculated. The dried films were weighed on the digital balance. The films exhibited uniform weight ranging from 0.360 ± 0.020 to 0.416 ± 0.015 g with low standard deviation values. The data are shown in the Table and order of the weight of films is F6 < F2 < F5 < F3 < F4 < F7 < F1.

Water Vapor Transmission Rate: The water vapor transmission rates of different formulations were evaluated, and the results are shown in Table. Ketoprofen patches containing HPMC alone showed higher WVTR as compared to the formulations containing EC. This may be due to the HPMC, which is more hydrophilic than EC, which is less permeable to water vapor. Formulation F7 showed highest WVTR whereas F3 showed lowest WVTR.

Tensile Strength: The tensile strength measures the ability of a patch to withstand rupture. Presence of dibutyl phthalate and dimethyl sulfoxide has shown good tensile strength. Both the combination show significant tensile strength. The mean value was found to vary between 2.98 ± 0.110 to 3.86 ± 0.125 kg/mm2. The tensile strength results indicate the strength of the film and the risk of film cracking. But, no sign of cracking in prepared transdermal films was observed, which might be attributed to the addition of the plasticizer. The results of tensile strength are shown in Table.

Drug Content: For the various formulations, prepared drug content was found to vary between 1.054 ± 0.071 mg to 1.178 ± 0.071 mg. The cumulative percentage drug permeated and percentage drug retained by the individual patch in the in-vitro skin permeation studies were based on the mean amount of drug present in the respective patch. Drug distribution was found to be uniform in the polymeric films, and data are given in Table.

In-vitro Drug Diffusion Study: The in-vitro release profile is a valuable tool that predicts in advance how a drug will behave in-vivo. Release studies are required for predicting the reproducibility of rate and duration of drug release. The transdermal therapeutic system of Ketoprofen using a polymeric matrix film, allows one to control the overall release of the drug via an appropriate choice of polymers and their blends. The results of percentage drug release from the prepared medicated transdermal film.

Increase in the concentration of hydrophilic polymer (HPMC), increases the thermodynamic activity of the drug, which results in increased drug release during in vitro studies. Henceforth formulation F7 was found to be satisfactory as it fulfills the requirements of better and prolonged drug release. It is well known that the addition of the hydrophilic component to an insoluble film former leads to enhance its release rate constant. This is because dissolution of the aqueous soluble fraction of the polymer matrix leads to the formation of gaseous pores. The formation of such pores leads to decrease in the mean diffusion path length of drug molecules to release into the diffusion medium and hence, to cause a higher release rate.

CONCLUSION: The following conclusions were drawn from the results obtained. A suitable UV Spectroscopy method for the analysis of Fenoprofen was developed. Ketoprofen showed maximum absorption at wavelength 245nm in isotonic phosphate buffer (pH 7.4) solutions. The R2 value for the standard curve was found to be 0.999, which showed a linear relationship between drug concentrations and absorbance values. The preformulation studies involving description, solubility, melting point, the partition coefficient of the drug were found to be comparable with the standard. Based on all the above preformulation studies the drug was suitable for making the transdermal formulation.

Drug-polymer compatibility studies by FT-IR confirmed their purity and showed no interaction between the drug and selected polymers. Various formulations were developed by using hydrophilic and hydrophobic polymers like HPMC E5 and EC respectively in single and combinations by solvent evaporation technique with the incorporation of penetration enhancers such as dimethyl sulfoxide and dibutyl phthalate as a plasticizer.

ACKNOWLEDGEMENT: The authors acknow-ledge the assistance of Dr. Roshan S (Principal, Azad College of Pharmacy, Moinabad) for his help in carrying out the experiments.