FOLIAGE OF APIACEAE MEMBERS: A RICH SOURCE OF VITAMIN E AND K

FOLIAGE OF APIACEAE MEMBERS: A RICH SOURCE OF VITAMIN E AND K

ABSTRACT: Vitamins are essential components of any diet and diet deficient in vitamins is the prime reason for malnutrition. In the present investigation, essential oil fractions isolated from foliages and tender shoots of few Apiaceae members commonly used as spices, vegetable, and flavoring agents were involved in phytochemical diversity analysis. GC-MS fingerprinting of the essential oil fractions isolated from young foliages and tender stems showed the presence of vitamin E and K in appreciable quantity. The foliage of carrot (Daucus carota L.), a popular winter vegetable is very rich in α-Tocopherol and phytonadione. Tender shoot portion of ajwain (Trachyspermum ammi Sprague, a common spice yielding member and coriander (Coriandrum sativum Linn.) also have a significant amount of α-Tocopherol and phytonadione. The study has indicated the supplementary use of these members as a potential source of vitamin E and K beside their common use.

INTRODUCTION: Vitamins are the essential components of the diet. Vitamin E and K are two important Vitamins required in our inadequate body amount. Vitamin E is an assemblage of fat-soluble vitamins which participate in preventing the oxidative stress to the body also help to protect heart disease and age-related eye damages. Vitamin E is the major lipid-soluble phenolic antioxidant in the cell the antioxidant defense system makes free radical unreactive 1 and is exclusively obtained from the diet.  Presently, sufficient data are not available to formulate recommendations for vitamin E intake for different age groups except for infancy 2.

As vitamin E is naturally present in plant-based diets and animal products and is often added by the manufacturers to vegetable oils and processed foods, intakes are probably adequate to avoid overt deficiency in most situations.

According to the analysis of the Food and Agriculture Organization of the United Nations nearly half of the α-tocopherol in a typical northern European diet such as in the United Kingdom is obtained from vegetable oils 3. Animal fats, vegetables, and meats each contribute about 10 percent to the total per capita supply; fruits, nuts, cereals, and dairy products each contributes about 4 percent while less than 2 percent is derived from egg, fishes and pulses. The name "Vitamin K" refers to a group of chemically similar fat-soluble compounds called naphthoquinones. Vitamin K1 (phytonadione) is the natural form of vitamin K which is found in plants and provides the primary source of vitamin K to humans through dietary consumption.

Vitamin K is necessary for normal clotting of blood in humans. More precisely vitamin K is required for the liver to make factors that are necessary for blood to coagulate. Phytonadione works by helping the liver to produce blood clotting factors. Dietary vitamin K mainly as phylloquinone is absorbed chemically unchanged from the proximal intestine after solubilization into mixed micelles composed of bile salts and the products of pancreatic lipolysis 4. In the present investigation, few members of Apiaceae which are very popular as a source of spices and flavoring agents were considered, and their phytochemical diversity was explored.

The essential oil was extracted from the dried leaf and tender stem samples following solvent extraction method of Burbott and Loomis 5. The extracted essential oil samples were analyzed by GC-MS electron impact ionization (EI) method by TRACE GC ULTRA Gas Chromatograph (Thermo Scientific) coupled with Polaris Q Mass Spectrophotometer (Thermo Scientific) using fused silica capillary column (30 m × 0.25 mm, 0.25 µm film thickness, coated with DB-5 from Agilent). The individual component was identified based on a comparison of their retention indices with those of literature data and by comparing their mass spectral data with those stores in the database from NIST.

TABLE 1: PEAK AREA PERCENTAGE OF α-TOCOPHEROL AND PHYTONADIONE IN DIFFERENT MEMBERS OF APIACEAE 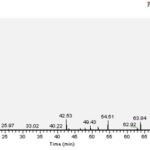 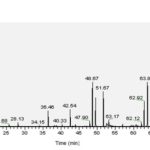 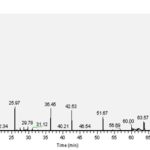 Apiaceae is ranked as one of the most important families best known as a source of important culinary herbs and spices. The phytochemical diversity of Apiaceae members are yet to be explored adequately.

CONCLUSION: The aromatic nature of these plants both in their foliage and fruits has led to their common use as spices and flavoring agent. The present study indicated the utility of their foliages as a potential source of vitamin E and K also.

ACKNOWLEDGEMENT: The Author expresses his sincere gratitude to UGC for funding the Project. The author is also thankful to the Director, Bose Institute for valuable help in GC-MS analysis.