INTRODUCTION: Medicinal plant has been discovered to play an important role in health care. Towards the end of the twentieth century, the World Health Organization (WHO) estimated that an impressive 80 % of the world’s population relies on natural medicines, with plant-derived medicines as the main component 1. Cancer generally refers to a group of diseases that cause cells in the body to change and grow out of control.

Incidence of cancer is on the increase worldwide, with an estimated 14.1 million new cancer cases in 2012. A recent report shows that cancer has claimed over nine million lives in 2015 2. Cancer is a complex multifactorial cell disease characterized by abnormal cellular proliferation 3.

To develop new anticancer drugs, different plants are being screened based on their ethnomedicinal uses. Many diseases such as cancer, diabetes, arteriosclerosis, inflammatory disease, autoimmunity, cardiovascular disease and Alzheimer’s have been associated with an increase of reactive oxygen species (ROS). Antioxidants are important substances that can protect the organism from the damage caused by oxidative stress.

As a result, there is a keen interest in the use of natural antioxidants from medicinal plants that may help an organism to keep the normal balance of ROS 4. The Lamiaceae family comprises of 250 genus and approximately 6970 species. The members of the family are spread all over the world, especially in the tropic and subtropical regions. The family grows abundantly in the Mediterranean areas, where it is possible to find the vast majority of the genus species. Many species of the Lamiaceae family are used in food due to the flavor and taste. Besides that, the members of the family are a good source of aromatic essential oils as well as ornamental plants 5.

Hyptis pectinata belongs to the family Lamiaceae. It is a perennial, erect aromatic herb to small shrub up to 4 m high with distinct, 4-angled stems. Leaves are opposite, petiolate, the blade ovate to nearly triangular with serrate margins, pubescent, 1.5 to 7 cm long, 1 to 2.5 cm wide. Flowers small, strongly zygomorphic, white or pink-tinged, borne in dense cyme-like clusters arising from spike-like inflorescences  30-60 cm long. The fruit is nutlet 6. Stems woody at the base, much branched, pubescent, 4-angled.

In Taiwan, it occurs at lowlands in the eastern part. The seeds are oval, dark brown to blac. It is seen along roadsides or waste places and associated with other obnoxious weeds such as Conyza Canadensis (L.) Cronq.var. canadensis, Biden spilosa L. var. radiate Schultz-Bip., Ipomoea triloba L., Chloris barbata Sw. and Chamae sycehirta (L.) Mill. This herb can be distinguished from its similar species, Hyptis suaveolens (Linn.) Poit, by its comb-shaped cymes, pink or whitish violet flowers and smaller calyx with white trichomes between bristly calyx-lobes 7.

Hyptis pectinata L. Poit, known as ‘sambacaitá’ in Brazil is used to treat inflammatory and painful disorders. The leaf has been reported to possess antioxidant properties 8. Hyptis pectinata (L.) Poit is a widely distributed species in Nigeria, with local names as “Kimbar awaaki” (Hausa), ”Jogbo or Alatoriyo” (Yoruba) and ”Idumuje” (Igbo). The leaves are used as a tea, for the treatment of inflammatory conditions, malaria, infections, and cancer. The leaves and bark are used as an infusion for the treatment of throat and skin inflammations, bacterial infections, pain, fungal infections and cancer. The leaves of the plant are edible which can be served as food 9, 10, 11. Hyptis species are aromatic plants with the presence of biologically active substances such as antimicrobial, antifungal, anti-HIV, analgesic, anti-inflammatory activities, anti-oxidant activity, molluscicidal, hemostatic, anti-ulcer, cytotoxicity and insecticide properties 12-23.

Anti-oxidants are important due to their ability to scavenge free radicals such as reactive oxygen species (ROS), which are known to cause damage to cells at the molecular level. Oxidative stress is implicated in various diseases related to degenerative disorders, arthritis, diabetes, cancer, and immune system decline. Antioxidant compounds play a crucial role in the treatment of these diseases by acting to reduce oxidative stress and thus decreasing the extent of oxidative damage. There is a global demand for antioxidants from natural sources such as plants 24.

This study aims to evaluate the phytochemical, antioxidant and anti-proliferative properties of the aerial part aqueous extract of Hyptis pectinata (L.) growing in Northern Nigeria.

Collection of Plant Material: The plant material was collected by Mr. Muazzam Ibrahim from Suleja, Niger State and identified and authenticated by Mr. Lateef of NIPRD Abuja.

Plant Preparation and Extraction: The plant sample was powdered using mortar and pestle. Hot water extract of Hyptis pectinata was prepared as described 25, with some modifications. Briefly, 100 g of powdered dried plant material was stirred into 2 Litres of boiling water. This is more or less the equivalent of a teaspoon full in a cup of boiling water. It was decided on this method of preparation as it is mostly used as an infusion by traditional healers. This mixture was left to cool and stand overnight at room temperature, after which it was filtered and concentrated to dryness. This method gave a yield of 3.25 g (3.25 % w/v). The dried extracts were used immediately for analysis.

Experimental Plant: The experimental plant, Sorghum bicolor (Guinea corn) seeds were purchased from Dumez small market, Niger State and identified and authenticated by Mr. Muazzam Ibrahim of NIPRD Abuja. The seed viability test was performed by placing the seeds inside a beaker containing water. The seeds that floated were discarded while the submerged seeds were cleansed with methylated spirit, dried and used for the study.

Antioxidant Assay: The method of Muraina et al., 2009 27 was used with some modifications. To evaluate the DPPH radical scavenging activity of the extract, ten microlitres of 10 mg/ml of HYP in methanol was spotted on TLC plate and eluted in a polar solvent comprising the mixture of ethyl acetate and methanol in the ratio of 3:2.

The developed plate was dried and immediately sprayed with 0.05 % DPPH reagent in methanol and left at room temperature for 30 min. The DPPH test is based on the ability of the extracts to donate radical hydrogen to scavenge the stable DPPH radical. When this radical reacts with the anti-oxidant compound, it is reduced with the loss of the deep violet color to light yellow. Anti-oxidant compounds of HYP bleached the purple color of DPPH reagent, thereby appeared as yellow spots Fig. 2. The yellow spots were evaluated as positive antioxidant activity 28.

A two-fold dilution of 20 mg/ml of an extract with 50µl of distilled water in a 96-well micro-dilution plate was performed. After that, 50µl of 0.2 mg/ml of 3-(4,5-dimethylimidazole-2-yl)-2,5-diphenyl tetrazolium bromide (MTT) was added to every well, and the plate was incubated at 37 ºC after which the result was read. Distilled water was used as negative control and ascorbic acid was used as standard drug. Formation of bluish coloration or precipitate was indicative of antioxidant activity. The lowest concentration of the sample at which the presence of antioxidant activity is detected was recorded as the minimum inhibitory concentration (MIC). The experiment was done in triplicate.

Determination of Growth Inhibitory Effects: The modified methods of Ayinde et al., 29 and Chinedu et al., 30 were used for this study. HYP (3.2 g) was dissolved in 100 ml of distilled water to obtained 32 mg/ml stock solution. Various concentrations (1 mg/ml, 2 mg/ml, 4 mg/ml, 8 mg/ml, 16 mg/ml and 32 mg/ml) of HYP were prepared. Methotrexate used as a standard drug at a concentration of 0.05 mg/ml. Petri dishes were layered with cotton wool and filter paper (Whatman no. 1). The filter paper was divided into 24 sections in a dart fashion.

Twenty four (24) seeds of S. bicolor were placed in a separate sample bottle for pre-treatment. The control seeds were treated with 15 ml of distilled water. The test seeds were treated with the different concentrations of HYP as the seeds in each specific bottle received 15 ml of a particular concentration. Duration of pre-treatment in the sample bottle was 24 h. The seeds were then arranged in the specified Petri dish, incubated in a dark cupboard at ambient temperature and observed for growth after 24 h. The mean lengths (mm) of radicle emerging from the seeds were measured after 24, 48 and 72 h. The percentage growth inhibition was calculated as [(mean radicle length control - mean radicle length treated)/mean radicle length control] × 100. Percentage growth was calculated as 100 ‒ % inhibition. The experiment was performed in duplicate.

RESULTS AND DISCUSSION: Hyptis pectinata is widely used in tropical countries due to its flavor and medicinal properties. The results Table 1 demonstrate that H. pectinata possessed significant cytotoxic and growth inhibitory activities at the concentrations investigated compared to water as a negative control (p<0.0001).

Antioxidant Activity: The aqueous extract of Hyptis pectinata aerial part (HYP) gave antioxidant activity with both DPPH and MTT. The antioxidant activity of HYP was performed employing 3-(4,5-dimethyl thiazole-2-yl)-2,5-diphenyl tetrazolium bromide (MTT) and 96-well microdilution technique. Concentration of the extract ranged from 10 mg/ml to 0.01 mg/ml and the concentration of the reference ascorbic acid ranged from 0.1 mg/ml to 0.0001 mg/ml. The bluish coloration formed due to the antioxidant activity of HYP was observed from the first dilution at 10 mg/ml up to the ninth dilution at 0.08 mg/ml in 2-fold dilutions signifying the presence of antioxidant compounds at those concentrations. The ascorbic acid was active from 0.1 mg/ml to 0.013 mg/ml. Therefore, the anti-oxidant properties of H. pectinata could play a useful role in food preservation and also in the prevention of oxidative damage associated with many diseases. The caffeic acid, rutin, and ferulic acid content may have contributed to the observed antioxidant activity of H. pectinata since caffeic acid, rutin and ferulic acid have been reported to possess antioxidant property 32-35. 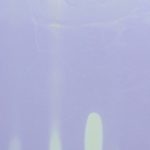 Growth Inhibitory Effects of Hyptis pectinata on Sorghum bicolor Seeds: As a preliminary anticancer screening, the radicle lengths of fast-growing seeds such as Sorghum bicolor has been utilized for the testing of suspected anticancer agents. Generally, cancer cells have a characteristic of fast proliferation, and this is also the case with meristematic cells of Sorghum bicolor seeds when exposed to favorable conditions 2.

That was the justification for the use of the method for this study. As shown in Fig. 2, there was a dose-related reduction in the length of the radicle of Sorghum bicolor seeds treated with the various concentration of H. pectinata extract compared to the distilled water used as control at 24 - 72 h. Rapid and progressive growth was observed in the water control seed radicle lengths. 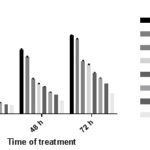 This is indicative of the cytotoxicity of Hyptis pectinata aerial part hot water infusion which is in agreement with previous studies 36. Therefore, the growth inhibitory effect of HYP was concentration-dependent.

CONCLUSION: The hot water extract of Hyptis pectinata (HYP) exhibited antioxidant activity and growth inhibitory effects. Hence, by extension, it can inhibit cancerous cells. The bioactive chemical constituents of HYP detected by high-performance liquid chromatography were caffeic acid, ferulic acid, and rutin. This study provided preliminary evidence that supports the ethnomedicinal use of Hyptis pectinata aerial part as tea in the treatment of malaria and cancer.