INTRODUCTION: Syzygium alternifolium (Myrtaceae) is common on the hills of open dry deciduous forests. The stem and fruits have been used by various local tribes (Yanadi, Yerukula, Sugali) and rural folk for a long time in Rayalaseema districts. Fruits with seed powder along with water 3 times a day gave after food as a remedy in controlling diabetes. Stem decoction is given to regulate the blood sugar level. The fruit pulp is used in local tribes to treat bacillary dysentery. Fruit decoction (20 ml) is given orally once a day for a month to cure ulcers in the stomach. Zeba Baqtiyar et al., reported the Anti-Ulcer activity of Syzygium alternifolium against ethanol and NSAID induced ulcer in rats 1.

Presence of various phenolic acid and flavonoids in the plant material was reported by Sreevani deepuru et al. 2 Rao et al. reported hypoglycaemic and anti-hyperglycaemic activity of Syzygium alternifolium (Wt.) Walp. seed extracts in normal and diabetic rats 3. Survey of literature on the selected plant, i.e., Syzygium alternifolium revealed that the scientific data are unavailable as regards to their Phytochemical details and pharmacological activities. The plant, therefore, offers scope for investigations on the phytochemical profiles and screening for various pharmacological activities. In our phytochemical studies, we have found the presence of various phenolics and flavonoid compounds. Considering the antioxidant potentials of these compounds an attempt was made to evaluate the hepatoprotective activity of the stem bark of the plant.

Plant Material: The aerial parts of Syzygium alternifolium were collected from foothills of Tirumala, and their entity was confirmed Dr. Madhava Chetty, Botany department, SV University, Tirupathi, India. The voucher specimen (COG /TML/04/SVSK/2014) has been deposited in the Herbarium of the Institute.

Preparation of Extracts: 300 g of powdered bark of Syzygium alternifolium was extracted completely with ethanol using soxhlet apparatus. The extract concentrated in vacuum solid mass (17.8 % w/w). Presence of flavonoids, phenolics, terpenoids, and steroids revealed by preliminary Thin Layer Chromatographic studies of ethanol extract. The extract was tested for hepatoprotective activity at dose levels of 200 and 300 mg/kg p.o. The results were compared with standard hepatoprotective drug silymarin (100 mg/kg). All the test substances were suspended in a vehicle (5% acacia mucilage).

Estimation of Phenolic Content: The total phenolic content of the ethanol extract of S. alternifolium was estimated by the method of Folin ciocalteu 4. Stock solution (0.5mg/ml) of the extract was prepared ethanol. From the stock solution 1ml of the extract was taken into a 25 ml volumetric flask. To this added 10 ml of water and 1.5 ml of Folin-ciocalteu reagent. The mixture was kept aside for 5 min, and then 4 ml of 20% sodium carbonate solution was added, and volume was made up to 25 ml with double distilled water. The mixture was kept aside for 30 min, and the absorbance of blue color developed was recorded at 765 nm. For the preparation of the calibration curve, the solutions of standard gallic acid were prepared in a concentration range of 50 to 250 µg/ml.

Estimation of Total Flavonoid Content: Reported methods estimated the total flavonoid content of the ethanol extract of S alternifolium. The aluminium chloride colorimetric method was used for estimating Flavones, flavonols, and isoflavones as reported by Chang et al. 5 Quercetin was used to make the calibration curve. From the stock solution of standard 0.1, 0.2, 0.3, 0.4 and 0.5 ml were taken which gave 10, 20, 30, 40 and 50 µg concentrations respectively. The diluted standard solutions (0.5 ml) were separately mixed with 1.5 ml of 95% ethanol, 0.1 ml of 10% aluminium chloride, 0.1 ml of 1M potassium acetate and 2.8 ml of distilled water. The absorbance of the reaction mixture was measured at 415 nm, after incubation at room temperature for 30 min. The amount of 10% aluminium chloride was substituted by the same amount of distilled water in the blank. Similarly, 0.5 ml of methanol extract of S. alternifolium (0.5 mg/ml) was reacted with aluminium chloride for determination of total flavonoid content.

Toxicity Studies: Acute toxicity studies were performed for ethanolic extract according to the acute toxic classic method 6 described by OECD. Female albino rats were used for acute toxicity study. The animals were kept fasting for overnight providing only water. The rats were divided into two groups of 3 animals each. The groups of rats were administered orally with ethanolic extract of S. alternifolium at a dose of 300 mg/kg. The animals were observed continuously after dosing during the first 30 min, periodically for the first 24h with special attention given during the first 4 h and daily thereafter, for a total of 14 days. As there was no mortality seen at this dose level, the procedure was repeated with further dose (2000 mg/kg) using fresh animals.

Hepatotoxin & Test Substances: Test substances including silymarin were suspended in vehicle, i.e. 5% acacia mucilage for administration. Thio-acetamide at a dose level of 100 mg/kg in water for injection was administered intraperitoneally.

Thioacetamide-Induced Hepatotoxicity: 7 Rats were divided into 5 groups of 6 each, control, thioacetamide, silymarin, and test groups. The rats of the control group received a single daily dose of 5% acacia mucilage (1 ml/kg, p.o.). The rats of the toxicant group received a single daily dose of vehicle (1 ml/kg, p.o.) for three days and a single intraperitoneal injection of thioacetamide (100 mg/kg) in water for injection, 30 min after the administration of the vehicle on the second day of treatment. The rats of the silymarin group received silymarin (100 mg/kg p.o.) three times at 24h intervals. Thioacetamide was administered 30 min after the second dose of silymarin while test groups were given orally a single daily dose of extracts in the vehicle for three days and a single dose of thioacetamide (100 mg/kg i.p.) on the second day 30 min after the administration of respective test suspensions. After 48 h of thioacetamide administration, i.e. 4th day of the experiment the blood was collected, and serum was used for determination of biochemical parameters.

Assessment of Liver Function: Glutamic oxaloacetic transaminase (GOT), was estimated by a UV-Kinetic method based on the reference method of the International Federation of Clinical Chemistry 8. Alkaline phosphatase (ALKP) was estimated method by PNPP method 9, while total bilirubin (TBL) by Jendrassik and Grof method 10, total cholesterol (CHL) by CHOD- PAP method 11, lactate dehydrogenase (LDH) by pyruvate method 12 and total protein (TPTN) by color complexation with copper ions in an alkali solution 13. All the estimations were carried out using standard kits on auto analyzer of Agappe make (Mispa Excel).

Histopathological Studies: Animals were sacrificed to remove the liver. The liver was fixed in Bouin’s solution for 12 h and then embedded in paraffin using conventional methods 14, cut into 5 µm thick sections and stained using hematoxylin-eosin dye. The sections were then observed for histopathological changes.

Statistical Analysis: The mean values ± SEM were calculated for each parameter. Percentage restoration against the hepatotoxin by the test samples was calculated by considering the difference between the hepatotoxin treated group and the control group as 100% restoration. For the determination of significant intergroup difference each parameter was analyzed separately and one-way analysis of variance (ANOVA), 15 was carried out. After that individual comparisons of group mean values were done using Dunnet’s test 16.

In acute toxicities, the extract did not cause any mortality up to 2000 mg/kg and was considered as safe. Administration of thioacetamide (100 mg/kg i.p.) induced a marked increase in the serum levels of GOT, ALKP, TBL, LDH, and CHL; and decrease in the levels of TPTN, indicating parenchymal cell necrosis. A significant decrease (p<0.05) in all the elevated levels of biochemical parameters and significant (p<0.05) increase in depleted TPTN levels was observed with the groups of rats which received ethanolic extract at dose levels of 300 mg/kg as observed in case of silymarin treated group. Results of thioacetamide-induced hepatotoxicity are shown in Table 1.

TABLE 1: EFFECT OF EE OF SYZYGIUM ALTERNIFOLIUM ON THIOACETAMIDE-INDUCED HEPATOTOXICITY IN RATS

Normal cellular architecture with distinct hepatic cells, sinusoidal spaces, and central vein Fig. 1A was observed with histological examination of liver sections of the control group. The examination of liver sections of rats administered with TAA showed hepatic cells with severe toxicity characterized by centrilobular necrosis along with various gradation of fatty changes comprising of tiny to largely sized vacuoles, disarrangement of hepatic cells with blood pooling in sinusoidal spaces Fig. 1B. The liver sections of the rats administered with 300 mg/kg p.o. of ethanolic extract Fig. 1E followed by TAA intoxications, showed a lesser degree of visible changes similar to that observed in case of silymarin treated rat liver sections Fig. 1C thereby suggesting the protective effect of the extracts. Administration of a single dose of thioacetamide in rats produces centrilobular hepatic necrosis. It gets metabolizes to a toxic metabolite thioacetamide-S-oxide, a direct hepato-toxin, which is further it is metabolised, at least in part, by cytochrome P450 monooxygenases. 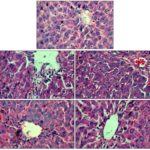 The subsequent product formed exerts hepato-toxicity by binding to hepatocyte macromolecules and causes centrilobular necrosis by the generation of reactive oxygen species. It induces toxicity by altering the semi-permeable character of the cell membrane of hepatocytes resulting in an increased influx of calcium ions and leading to necrosis and finally death 17, 18. Therefore extracts under study antagonize the effect of thioacetamide by inhibiting cytochrome P450 or by acting either as a membrane stabilizer, thereby preventing the distortion of the cellular ionic environment associated with thioacetamide intoxication, or by preventing interaction of thioacetamide with the transcriptional machinery of the cells resulting in regeneration of hepatic cells. Thus, the hepatoprotective activity of these extracts may be due to their ability to affect the cytochrome P450 mediated functions or stabilization of endoplasmic reticulum resulting in hepatic regeneration.

CONCLUSION: Many plants containing flavonoids are found to have hepatoprotective activity because of their antioxidant activity; hence it may be hypothesized that phenolics and flavonoids with their anti-oxidant properties, which are present in the ethanolic extract of S. alternifolium are responsible for the hepato-protective activity.

ACKNOWLEDGEMENT: Authors are thankful to Management and principal, CES College of pharmacy, for providing the necessary facilities.