ABSTRACT: The anti-inflammatory and antioxidant activities of the methanol extract of Amomum masticatorium rhizome were observed in various experimental models. Phytochemical constituents like phenols and flavonoids were also estimated. The antioxidant activity was evaluated by DPPH and superoxide radical scavenging assays. The extract showed significant antioxidant activity. The in-vitro anti-inflammatory activity of the extract was investigated by various methods viz. albumin denaturation, membrane stabilization, and proteinase inhibitory assays. Results showed that the extract exhibited significant anti-inflammatory activity by inhibiting the heat-induced albumin denaturation with IC50 value 34.15 ± 0.404µg/ml, effectively stabilized RBC membrane with an IC50 value of 51.47 ± 1.56 µg/ml and significantly inhibited proteinase activity with an IC50 value of 52.8 ± 0.61µg/ml. In-vivo activity was evaluated in carrageenan and formalin-induced paw edema test in mice and compared with that of standard drug diclofenac. In both models, the extract showed a significant reduction in edema. The extract at 200 mg/kg b. wt showed a significant reduction in carrageenan-induced paw edema at a 3rd h and chronic edema on the 6th day. From the results, it is concluded that methanol extract of Amomum masticatorium rhizome exhibited significant anti-inflammatory and antioxidant activity, which may be due to the presence of active phytochemicals in it.

INTRODUCTION: Inflammation is a protective response of cell which involves several mechanisms and complex array of enzyme activation, mediator release, cell migration, tissue breakdown, and repair - inflammation results in the release of endogenous mediators like histamine, serotonin, bradykinin and prostaglandin 1.

It plays a major role in most chronic illnesses like neurodegenerative, cardiovascular, pulmonary, metabolic, autoimmune and neoplastic diseases 2. Sometimes inflammation may lead to events that are quite serious and become chronic, like the occurrence of rheumatoid arthritis 3.

Many of the anti-inflammatory drugs available have many side effects which impose a growing concern for more natural alternatives. Amomum masticatorium of Zingiberaceae is found as undergrowth in the evergreen forest at high altitudes. It has slender stoloniferous rhizomes. The rhizome of this plant is aromatic and carminative. It is used to chew with betel in Sri Lanka 4.

Several species of Amomum has traditional medicinal uses. Some are prescribed for the treatment of indigestion, vomiting, abdominal pains and rectal diseases. They are also ingredients of Ayurvedic and Unani medicines. A closely related species Amomum subulatum have reported to possess valuable properties like allopathic, analgesic, anti-inflammatory, antimicrobial, antioxidant, antiulcer, cardio-adaptogen and hypolipidaemic activities 5.

Plant Material: The plant material was collected from Wagamon, Idukki district, Kerala, India. The material was herbarised (CALI 123766) and deposited at CALI, University of Calicut. The rhizome of the plant was chopped into small pieces, shade dried and powdered. The powdered material was run in soxhlet apparatus for 6 h with methanol for extraction. The extract was evaporated in a vacuum to completely remove the methanolic content to get a final thick extract.

Total Phenolic Content: The total phenolic content in the extract was determined by Folin-Ciocalteu assay 6. Gallic acid was used as standard. The content of phenolic compounds of the sample was expressed as gallic acid equivalents in mg per gram dry weight (mg GAE/g DW). All the samples were analyzed in triplicates.

Antioxidant Potential: The antioxidant property of the extract was determined by superoxide radical scavenging by the NBT reduction method 7. The optical density was measured at 560 nm, and percentage inhibition was evaluated by comparing the absorbance value of the control and samples. DPPH radical scavenging potential was measured by the method proposed by Coruh et al., 2007 8. DPPH has an absorption peak at 515 nm which disappears on reduction by an antioxidant compound. The extract was added to 1.5 ml of freshly prepared DPPH solution and absorbance measured at 515 nm 20 min after the reaction was started. The percentage inhibition was calculated by comparing with that of the control.

Inhibition of Albumin Denaturation: Inhibition of albumin denaturation was studied according to methods previously described 9, 10. The reaction mixture containing test extracts of different concentrations (50 µg, 100 µg and 200 μg/ml) and 5% aqueous solution of bovine albumin fraction were incubated at 37 °C for 20 min and then heated to 57 °C for 20 min. After cooling the samples, the turbidity was measured at 660 nm. The experiment was performed in triplicate. The percentage of inhibition of protein denaturation was then calculated. Diclofenac was used as the standard.

Proteinase Inhibition: The potential for inhibiting proteinase was evaluated according to the method of Oyedepo et al., (1995) 11. The reaction mixture (2 ml) with 0.06mg trypsin, 1 ml 20 mM Tris HCl buffer (pH 7.4) and 1ml test sample of different concentrations (50-200 μg/ml) was incubated at 37 °C for 5 min. Then 1ml of 0.8% (w/v) casein was added and was incubated for an additional 20 min. 2 ml of 70% perchloric acid was added to stop the reaction. The cloudy suspension was centrifuged, and the absorbance of the supernatant was read at 210 nm against buffer as blank. The experiment was performed in triplicate. The percentage inhibition of proteinase inhibitory activity was calculated.

Membrane Stabilization: Preparation of Red Blood cells (RBCs) suspension was done according to the standard protocol 12. The blood sample was collected and transferred to the centrifuge tubes. The tubes were centrifuged at 3000 rpm for 10 min and were washed three times with equal volume of normal saline. The volume of blood was measured and reconstituted as 10% v/v suspension with normal saline.

Heat Induced Haemolysis: The reaction mixture consisted of a 1ml test sample of different concentrations (50-250 μg/ml) and 1ml of 10% RBCs suspension, instead of test sample the only saline was added to the control test tube 13.

Diclofenac was used as standard drug. The centrifuge tubes were incubated in a water bath at 56 °C for 30 min. The tubes were then cooled under running tap water. The reaction mixture was centrifuged at 2500 rpm for 5 min, and the absorbance of the supernatants was read at 560 nm. The experiments were performed in triplicates. The percentage of inhibition of hemolysis was calculated.

Carrageenan-Induced Acute Inflammation: Male swiss albino mice were used for the experimental study. The animals were divided into four groups with five animals in each group. Group, I was treated with carrageenan alone and was taken as the control. Group II was treated with standard drug diclofenac (10 mg/ kg/ b. wt). Group III and IV were treated with different doses of the extract (50 mg/kg and 200 mg/kg b.wt). The extract was administered orally for five consecutive days. One hour after the fifth dose of the extract, acute inflammation was induced in the right hind paw of the mice by sub plantar injection of 0.02ml freshly prepared 0.1% carrageenan in normal saline 14. Paw edema volume was measured using vernier callipers. Reading was taken every 1 h up to 6 h, and finally reading at 24 h was also taken.

Formalin-Induced Chronic Inflammation: Male swiss albino mice were divided into four groups with five animals in each group. Group I was treated as the control. Group II was treated with standard drug diclofenac (10 mg/kg/b. wt). Group III and IV were treated with different concentrations of the extract (50 mg/kg and 200 mg/kg b. wt). The extract was administered orally for five consecutive days. One hour after the fifth dose of the extract, chronic inflammation was induced in the right hind paw of the mice by sub plantar injection of 0.02 ml of 2% formalin 15. Paw edema thickness was measured using Vernier calipers. Reading was taken for six consecutive days. 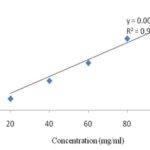 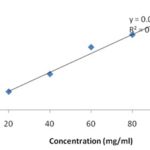 The total phenolic and flavonoid content of the extract was found to be in considerable high amounts. Flavonoids are used in the treatment of many common diseases. Their ability to inhibit specific enzymes, simulate some hormones and neurotransmitters, and scavenge free radicals is already proven 17. Phenolic compounds are also reported to have several biological properties, including antioxidant activity 18. 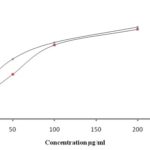 Antioxidant: The methanolic rhizome extract has significant radical scavenging activity which exhibits its high antioxidant perspective. The IC50 values are given in Table 1.

It shows a dose-dependent increase in the activity in both DPPH and superoxide radical scavenging assays Fig. 3. Antioxidants have many health benefits and are considered to be important nutraceuticals 19.

The antioxidant potential of the plant extract is mainly from the flavonoids which contain hydroxyl functional groups 20.

TABLE 1: IC50 OF THE EXTRACT IN ANTIOXIDANT ASSAYS

In-vitro Anti-inflammation: In all the three in-vitro anti-inflammatory assays, the extract showed significant activity. The results are given in Table 2 and 3.

TABLE 2: PERCENTAGE INHIBITION OF THE EXTRACT IN VARIOUS ANTI-INFLAMMATORY ASSAYS

Each value (mean ± S.E.) represents the mean of three replicates. Means in a column followed by the same superscript letters are not significantly different (p < 0.05, one way ANOVA, DMR test).

TABLE 3: IC50 OF THE EXTRACT IN IN-VITRO ANTI-INFLAMMATORY ASSAYS

The in-vitro anti-inflammatory assays provide considerable evidence for the anti-inflammatory ability of the extract. Protein denaturation and inflammation are concomitantly related. Tissue damage during inflammatory reactions occurs due to the release of leukocytes proteinase 21. A significant level of protection was provided by the extract which may have inhibited the activity of proteinase. The erythrocyte membrane is analogous to the lysosomal membrane 22, 23. The extracellular activity of lysosomal enzymes released during inflammation may lead to severe disorders. The extract might have stabilized lysosomal membrane thereby inhibiting the activity of these enzymes.

In-vivo Anti-inflammation: Carrageenan and formalin-induced edema models are important assays for establishing the in-vivo anti-inflammatory activity of the extract. 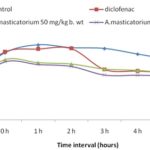 TABLE 4: EFFECT OF THE EXTRACT ON CARRAGEENAN INDUCED PAW EDEMA IN MICE

Each value (mean ± S.E.) represents the mean of five replicates. Means in a column followed by the same superscript letters are not significantly different (p < 0.05, one way ANOVA, DMR test).

Formalin-Induced Inflammation: The extract also effectively inhibited formalin-induced edema Fig. 5. The extract at higher concentration showed 53.97% inhibition which was comparable with the effect of the standard drug Table 5.

Edema formation in the paw is the result of a synergism between various inflammatory mediators that increases vascular permeability and blood flow. The probable activity of the extract may be by the inhibition of inflammatory mediators such as histamine, serotonin, and prostaglandin. Anti-inflammatory properties of plants are attributed to the presence of phenolics and flavonoids in them which is also responsible for their antioxidant properties. ROS is scavenged by the antioxidants thus decreasing the disorders. 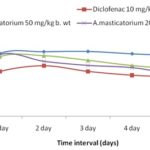 TABLE 5: EFFECT OF THE EXTRACT ON FORMALIN INDUCED PAW EDEMA IN MICE

Each value (mean ± S.E.) represents the mean of three replicates. Means in a column followed by the same superscript letters are not significantly different (p<0.05, one way ANOVA, DMR test).

CONCLUSION: The bioactivities of this species have been assessed for the first time. The extract has considerably high phenolic and flavonoid contest. The therapeutic applications of flavonoids on inflammation have previously been reported 24. Flavonoids and phenolics are also responsible for antioxidant activity. The anti-inflammatory property is highly related to the antioxidant capacity. This suggests that A. mastcatorium may be a potential source of chemical compounds which can be utilized in the pharmaceutical industry.

ACKNOWLEDGEMENT: The first author gratefully acknowledges the University Grants Commission for the award of FIP for doing this research work.

CONFLICT OF INTEREST: The authors declare that there are no conflicts of interest.