EVALUATION OF ANTIOXIDANT ACTIVITY OF ETHANOL AND CHLOROFORM EXTRACTS OF WILD AND MICROPROPAGATED CLEOME VISCOSA LINN.

EVALUATION OF ANTIOXIDANT ACTIVITY OF ETHANOL AND CHLOROFORM EXTRACTS OF WILD AND MICROPROPAGATED CLEOME VISCOSA LINN.

INTRODUCTION: Phytomedicine also known as an herbal medicine has become a mainstream phenomenon worldwide. Recently, it has been reported that more than 80% of the world population is dependent on herbal medicine 1. Plant beside therapeutic agents is also a big source of information for a wide variety of chemical constituents which could be developed as drugs with precise selectivity. These are the reservoirs of potentially useful chemical compounds which could serve as newer leads and clues for modern drug design 2.

ince, people are aware of organic pesticides and are intended towards using plant extracts to offer alternatives to synthetic insecticides 3. Moreover, the excessive use of medicinal plants for drug formulation increases the need for more biomass of plants which can be met with the biotechnological tools like micro-propagation 4.

Cleome viscosa Linn. commonly known as "wild or dog mustard," is an annual, sticky herb belonging to family Cleomaceae found as a common weed all over the plains of India and throughout the tropics of the world. The whole plant and its parts (leaves, seeds, and roots) are widely used in traditional and folkloric systems of medicine. In Asia and Africa the leaves and seeds used to treat infections, fever, rheumatism, and headache. The whole herb is used in the treatment of inflammation of the ear pain and applied on wounds and ulcers. A decoction is used as an expectorant and digestive stimulant and the vapour from a steaming decoction of the whole plant is inhaled to treat headache 5. Traditionally, this plant is used in various disorders such as diarrhoea, fever, inflammation, liver diseases, bronchitis, skin disease and malarial fever 6. Antioxidants act as a defense mechanism that protects oxidative damage and include compounds to repair damage molecules. It can prevent the oxidation caused by free radicals, and sufficient intake of antioxidants is supposed to protect against diseases 7. Antioxidants may be classified according to their mode of action as being free radical terminators, chelators of metal ions involved in catalyzing lipid oxidation or oxygen scavengers that react with oxygen closed system 8.

Free radicals are natural by-products of human metabolism. These are charged molecules which attack cells, breaking cellular membranes, reacting with the nucleic acids, proteins, and enzymes present in the cells. These attacks by free radicals, collectively known as oxidative stress, are capable of causing cells to lose their structure, function and eventually result in cell dysfunction. They are continuously produced by our body's use of oxygen, such as in respiration and some cell-mediated immune functions. Free radicals are also generated through environmental pollutants, cigarette smoke, automobile exhaust, radiation, air-pollution, pesticides 9. Hence, in the present study C. viscosa (in vitro and wild plant) extracts were employed to study its antioxidant property.

Sterilization and Inoculation of Explants: The nodal segment of the plant was chosen as explants for the present investigation. Actively growing shoots were selected as the source for explants. The explants were sterilization followed by Muthusamy Govarthanan et al., 2015. 10 The nodal segments were cut into 5 mm in size and carefully transferred to the sterile MS basal medium supplemented with 3% sucrose, 0.8% agar and different concentration of PGRs such as 6-Benzylaminopurine (BAP), kinetin (KIN), Naphthalene-3-acetic acid (NAA). The inoculated cultures were maintained in the growth chamber. Data was recorded after 28 days11.

Preparation of Plant and Callus Extracts: The wild and micro-propagated plants were washed thoroughly in sterile distilled water. The plants were shade dried and ground to fine powder using mortar and pestle. One gram (dry weight) of the powdered extract was soaked in 10 ml of ethanol for 3 h and sonicated in an ultrasonic sonicator at 20 pulses for 20 min. The extract was centrifuged at 10,000 rpm for 10 min, and the supernatant was freeze-dried and stored at 4 °C until further use 12.

DPPH Radical Scavenging Assay: The effect of ethanol and chloroform extracts of Cleome viscosa on DPPH (2, 2 - diphenyl 1, picrylhydrazyl) radical was estimated according to the procedure described by Von Gadow et al., 1997 13. 2 ml of 6 ×10-5 M methanolic solution of DPPH were added to 50 μl of an ethanolic solution (1 mg/ml) of the sample. Absorbance measurements commenced immediately. The decrease of absorbance at 515 nm was continuously recorded in a spectrophotometer for 16 min at room temperature. Methanolic solutions of pure compound (ascorbic acid) were tested at 1 mg/ml concentration.

RESULTS AND DISCUSSION: C. viscosa was efficiently regenerated from nodal explants from field has grown young plants on MS medium on supplemented with different concentration of cytokinins and auxins BAP, KIN, and NAA. The callus was observed in 15 days old culture on media tested and it was found the number of shoots developed on nodal explants Fig. 1A to Fig. 1C. 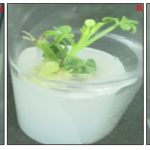 Scavenging activity for free radicals of 2, 2-diphenyl-2-picrylhydrazyl (DPPH) has been widely used to evaluate the antioxidant activity of natural products from plant and microbial sources. The antioxidant potential of the ethanol and chloroform extracts of wild and micro-propagated C. viscosa was shown 77.74%, 76.45% and 63.54%, 55.16% respectively. The positive standard of the ascorbic acid compound showed 94.83% of antioxidant potential Table 1 and Fig. 2. 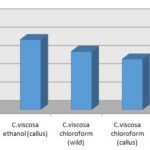 In response to the increased popularity and greater demand for medicinal plants, several conservation groups are recommending that wild medicinal plants be brought into cultivation.

A large number of medicinal plants and their purified constituents have shown beneficial therapeutic potentials. Various herbs and spices have been reported to exhibit antioxidant activity. The majority of the antioxidant activity is due to the flavones, isoflavones, flavonoids, anthocyanin, coumarin lignans, catechins and isocatechins 15. Previous authors analyzed the efficacy of free radical scavenging by using DPPH radical scavenging assay with ethanol crude extracts of C. viscosa showed the value of IC50 of leaf, stem, pod, and root were 8.32, 12.26, 21.62 and 35.99 mg/ml, respectively 16. The present study was ethanol, and chloroform extracts of the wild and callus exhibited significant antioxidant activities determined by DPPH assay. Cleome viscosa showed higher activities in the antioxidant assay.

ACKNOWLEDGEMENT: The authors are thankful to the Secretary and Principal, Ramakrishna Mission Vivekananda College (Autonomous), Mylapore, Chennai, India for providing all facilities.