Department of Pharmacognosy 1, Faculty of Pharmacy, MISR University for Science and Technology (MUST), Cairo, Egypt.

ABSTRACT: Hypertension is a common clinical problem encountered in day-to-day practice. Although several synthetic pharmaceutical drugs already exist for the treatment of hypertension, these drugs can develop many complicated side effects. On the other hand in our Arabian countries, patient compliance forces the population to frequently recourse to traditional medicine which mainly uses plants. Because of most of the medicinal agents including herbs were reported to have potentially unexpected effects including toxicity and interactions, this study focused on the investigation of antihypertensive activity of four plants mixture along with studying their interaction. In this study ethanolic extract of a mixture composed of four plants Hyphaene thebaica, Olea europaea, Origanum majorana, and Hibiscus sabdariffa was investigated for its antihypertensive activity and interaction between it's including herbs. 50 g of each plant powder was mixed homogeneously and macerated in 70% ethanol for about 7 days. The effect of this extract was investigated at a dose level of 25 mg/kg. Blood pressure was measured by a non-invasive blood pressure recorder apparatus before and after treatment. The results of this comprehensive study revealed that aqueous extract of this natural mixture showed a significant decrease in SBP as compared to fludrocortisone-induced hypertensive control mice. It was revealed that aqueous extract showed a hypotensive effect nearly equal to slandered control (captopril). According to the histopathology study, aq. The extract showed a protective effect against alterations and pathological changes that were induced by hypertension in the kidney.

INTRODUCTION: Hypertension (HTN) is one of the most prevalent non-communicable disorders, affecting several millions of people Worldwide.

Despite the availability of effective drug treatment and lifestyle adjustment programs, the frequency of HTN is increasing uncontrollably. Also, it is related with a rise in peripheral vascular resistance that can, in turn, lead to dangerous secondary health complications ranging from myocardial infarction, renal failure, strokes, and death, if not detected early in life and treated correctly 1. A decrease in blood pressure (BP) is considered to be the primary determinant of a decrease in cardiovascular risk.

Factors found to be linked with high BP are the result of a complex relationship between genetic and environmental elements, which can lead to activation or inhibition of one or more of the processes involved in the normal control of BP. Dietary factors and physical inactivity contribute to the genetic predisposition, while environmental factors like smoking, drinking, obesity and alcohol, thus making hypertension a preventable cause of morbidity and mortality 2.

The advantages of populations with hypertension leading a healthy lifestyle cannot be stressed enough, and this includes a controlled diet and regular exercise. The prime goal of treatment is to eliminate the risks factors associated with hypertension, without lessening the patient's quality of life 1, 3, 4, 5, 6, 7, 8, 9.

Medicinal plants have been used throughout human history for the treatment of various diseases. Kingdom of Saudi Arabia posses a variety of therapeutically active plants species. However, these plants are used by the public as an alternative to conventional medications. Medicinal plants, in particular, are widely used in Traditional Arabic Herbal Medicine for health maintenance and to treat various illnesses including chronic diseases 11.

The research studies have presented credible evidence that antihypertensive drug treatment is capable of preventing serious complications of hypertension in individuals with moderate and severe hypertension 12. Hence in this regard, the current research has been designed to evaluate the potency of dried powder mixtures of four native species of Saudi Arabia namely Hyphaene thebaica, Olea europaea, Origanum majorana, and Hibiscus sabdariffa for their antihypertensive potency with the below-given goals;

Preparation of Ethanolic Extract of Plant Mixture: For the mixture, four medicinal plants named Hyphaene thebaica, Olea europaea, Origanum majorana, and Hibiscus sabdariffa were used. The plants were purchased from the local market in Obhur, Jeddah, KSA and authenticated by Dr. Samah Shabana, Pharmacognosy Department, Faculty of pharmacy (MUST). The plants were cleaned, shadow dried, and ground to powder. 50 g of each powder was weighed, and the powders were mixed homogeneously in equal ratio and macerated in 2 liters of 70% ethanol for about seven days. The macerated mixture was filtered, and then 50 ml of filtrate concentrated to dryness in a rotary evaporator under reduced pressure. After evaporation in a vacuum, the vacuum-dried ethanolic extract of the mixture was weighed and dissolved in a definite amount of ethanol in water to make a final concentration of 1mg/ml 13, 14, 15.

Fractionation for Preparing Aqueous and Organic Extracts: Vacuum-dried ethanolic extract of the mixture (80 g) was macerated in Hexane with the solvent: the solute ratio of 3: 1 for 24 h with frequent shaking using separating funnel to separate the aqueous extract from organic one. The organic fraction was dried under vacuum using rotary evaporator IKA- RV10, USA. The dried extract was weighed and dissolved in a definite amount of liquid paraffin (safer for mice), to make concentrations of 1 mg/ml. Also, the aqueous fraction was dried under vacuum and weighted, dissolved in a definite amount of distilled water to make the concentration of 1 mg/ml 13, 14, 15.

These two extracts were subjected to the investigation of their antihypertensive activity, their interaction and effect on different organs.

Animals, Drugs, and Chemicals: Male albino Swiss mice 15 - 30 gm were used. The study was conducted according to the National Institutes of Health guidelines for the care and use of laboratory animals. All animal care and experimental procedures were carried out with the ethics approval of the local regulatory authority. The animals were housed in standard cages at room ambient temperature (22° - 25 °C) and humidity (45 - 50%) along with 12/12 h light/dark cycle during experiment course. They were fed standard rat chow with water freely accessible. Captopril and fludrocortisone acetate are purchased from Sigma-Aldrich, USA. AST, Albumin kits, Creatinine kits, and urea kits were purchased from the local market. All other chemicals employed in the current study were of the analytical standard.

Mineralocorticoids Induced Hypertension: The hypertensive control group was kept on a diet high in sodium chloride, and drinking water was replaced by 2% sodium chloride solution. After they attain a weight of about 25 gm, they have been given fludrocortisone dissolved in sesame oil at a dose of 10 mg/kg was administered once daily for three weeks. The mice of systolic blood pressure of more than 170 mmHg were chosen to be hypertensive mice in the current study.

Experimental Design: The mice were divided into 5 groups, each of 5 mice.

Assessment of Renal and Liver Functions in Mice: The blood sample was taken from each mouse from retro-orbital venous plexus. The serum was separated by centrifugation at 5000 rpm for 10 min. Kidney function was evaluated by estimation of serum creatinine, albumin, and urea by modified urease- Berthgot method. Serum samples were analyzed for total protein by the Biuret method, for creatinine (CRT) according to the Jeffe method, for blood urea nitrogen (BUN) by the modified urease-Berthelot method, and alanine transferase (ALT) activity by the enzymatic method, using a spectrophotometer and commercial colorimetric kits.

Histopathological Assessment for Renal Injury: For optical microscopy, kidneys were quickly removed, fixed in 40% formalin for 48 h for fixation. The fixed organs were dehydrated in ascending series of alcohol, cleared in xylene and embedded in paraffin wax, then 4 - 5 µm thick sections were obtained by rotary microtome and stained with hematoxylin and eosin 12, 13, 14.

RESULTS: Results are expressed as Mean values. Statistical analysis is obtained by processing the results through SPSS software. All data were analyzed by one-way analysis of variance (ANOVA), and Students-test was used to determine the source of a significant effect. P<0.05 is taken as an acceptable level of significant difference from control. 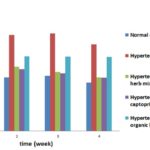 both herbal mix polar, and organic extracts showed a significant decrease in serum level of urea, creatinine as compared to the hypertensive control group.

b) Histopathology Study to Measure the Effect of Hypertension and Treatment with the Herbal Mixture on Kidney Tissues and Renal Tubules: 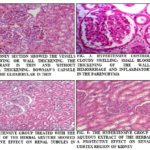 The polar and non-polar extracts of herbal mixture induced a potent anti-hypertensive activity. However, the polar (aqueous) extract showed a protective effect on kidney functions by decreasing the serum level of urea & creatinine, and these results were supported by the histopathological study.

The current herbal mix revealed cytoprotective and antioxidant properties. In this study, it has been demonstrated that the mixture of the extracts exerts higher cytoprotective and antioxidant activities than every single extract separately. Both of these functions are critically involved in cardiovascular protection and hypertension control as reported in the literature. It is a well-proven fact that the oxidative stress is indeed a cause of hypertension, and then antioxidants should have beneficial effects on hypertension control with reduced oxidative damage to the tissues.

Nahida T, in one of their review article has given the note of about 49 natural drugs which bears the antihypertensive potency not only that these drugs are still being used in the management of hypertension as the conventional medications have shown to be having much accountable adverse drug reactions 16. It does not mean that the natural substances are exempted from having adverse drug reactions but are managed with ease without altering either the quality of life or the treatment cost 17.

If antihypertensive medication is to give it must be given on an individual basis. Whereas, every individual would have consumed one or the other kind of the natural antihypertensive product in their lifetime, which further justifies the usage of natural products application in the management of hypertension in a better way than the conventional medications.

In the current research, the herbal mix showed no toxic effect on liver and kidney functions according to biochemical results that support our suggestion Table 1. These four herbs synergized each other to get a strong antihypertensive action. Which also proves that the combination of the herbs not only synergistically helpful in the management of hypertension also shows better in the protection of vital organs supported by the histopathological data, which are essential for the maintaining of good quality of life in every individual.

According to the histopathology study, the aqueous extract showed a protective effect against alterations and pathological changes that were induced by hypertension in the kidney that indicated there was no hazardous herb-herb interaction.

Department of Pharmacognosy, Faculty of Pharmacy, MISR University for Science and Technology (MUST), Cairo, Egypt.