ABSTRACT: Amaranthus spinosus, belongs to Amaranthaceae family, is an annual or perennial herb grows annually; native to tropical America and found throughout India as a weed in cultivated as well as fallow lands. Though the whole plant is used as a laxative, the roots are regarded as highly specific for colitis, and it is also used as antipyretic, febrifuge, diuretic. Other than its culinary value, it is utilized in the treatment of bronchitis, digestible, appetizer, biliousness, haematinic, galactagogue, stomachic, flatulence, nausea, anorexia, blood diseases, leucorrhoea, burning sensation, leprosy, and piles. This study aimed to investigate the anti-nociceptive activity of the ethanol extract of the root of Amaranthus spinosus Linn. The anti-nociceptive activity was investigated for its peripheral and central pharmacological action using acetic acid-induced writhing, hot plate, and tail immersion methods in Swiss albino mice at the doses of 200 and 400 mg/kg body weight. Ethanol extract of the root (200 and 400 mg/kg) showed the most significant anti-nociceptive activity in acetic acid induced writhing method with writhing inhibition of 48.83% and 67.44% accordingly, where the standard drug diclofenac-Na (25 mg/kg) showed 72.09% inhibition. In the hot plate test, ethanol extract of the root at the doses of 200 and 400 mg/kg showed maximum 61.50% and 62.80% nociception inhibition of thermal stimulus respectively, whereas the standard drug morphine (5 mg/kg) displayed maximum 64.18% nociception inhibition. In the tail immersion test, maximum 67.81% and 75.93% nociception inhibition of thermal stimulus was exhibited with ethanol extract of the root (200 and 400 mg/kg, body weight respectively). The present investigation revealed that ethanol root extracts of Amaranthus spinosus possess potent and dose-dependent central and peripheral anti-nociceptive activity justifying its traditional use in treating painful conditions.

INTRODUCTION: Analgesics alleviate pain as an indicator and it does not affect the cause of that pain.

Analgesic drugs like opiates and NSAIDs, which are currently available, are not of much use because of their unfavorable effects. These drawbacks urged for the emergence of seeking for a new compound with superior pain management capacity and lesser side effects 1.

The seeds can be applied on broken bones as a poultice. It is also useful in several internal treatments such as internal bleeding, diarrhea, and excessive menstruation. A decoction of the root is a great cure for gonorrhea and is also used as an emmenagogue and antipyretic in South-East Asia. Inducing abortion using A. spinosus is a very common phenomenon among the Nepalese and several tribes in India. Amaranthus spinosus contains 7-p-coumaroyl apigenin 4-O-beta-D-glucopyranoside, a new coumaroyl flavone glycoside (spinoside), xylofuranosyl uracil, beta-D-ribofuranosyl adenine, hydroxycinnamates, quercetin, beta-sitosterol-glucoside and kaempferol glycosides, betalains; betaxanthin, betacyanin; amaranthine and is amaranthine, gomphrenin, stigmasterol, b-sitosterol,betanin, linoleic acid, 0.15% rutin and beta-carotene 11, 12, 13, 14.

The aim of our present investigation was envisaged to ascertain anti-nociceptive activity of ethanol extracts from the roots of Amaranthus spinosus and to evaluate its possible mechanism of action utilizing various pain models such as acetic acid-induced writhing test, hot-plate test and tail-immersion tests. The analgesic activity of the roots of Amaranthus spinosus Linn. is reported in this paper as a part of our current investigation 15, 16, 17 on local medical plants of Bangladesh.

Plant Material: The plant (Amaranthus spinosus Linn.) was collected from the local area of Savar, Dhaka in November 2018. The collected plant was then identified by Bushra Khan, Principal Scientific Officer, Bangladesh National Herbarium, Mirpur, Dhaka, and a voucher specimen has been deposited (DACB: 46,794) for further reference.

Extraction: The dried leaves were powdered coarsely and then extracted with ethanol by a cold extraction method at room temperature. By using rotary evaporator, the solvent was completely removed, and the obtained dried crude extract is used for investigation.

Animal: For the experiment Swiss albino mice of either sex, 3-4 weeks of age, were collected from Animal Production Unit of Animal House at the Department of Pharmacy, Jahangirnagar University which weights are between 20-25 gm. Animals were maintained under standard environmental conditions (temperature: (24.0 ± 1.0º), relative humidity: 55-65% and 12 h light/12 h dark cycle) and had free access to feed and water ad libitum. The animals were acclimatized to laboratory condition for one week before experimentation 18.

Acute Toxicity Study: Mice were divided into control and test groups (n=6). In the test groups, the extract was given orally at the doses of 500, 1000, 1500, and 2000 mg/kg. Then the animals were kept in separate cages, and they were allowed to food and ad libitum. The control group received the water. The animals were observed for possible behavioral changes, allergic reactions, and mortality for the next 72 h 19.

Acetic Acid-Induced Writhing Test: The method explained by 20, adopted to study the effect of the Amaranthus spinosus Linn. extract on the acetic acid-induced writing test. Test samples and control (n = 6) were administered orally 30 min before intraperitoneal administration of 0.7% acetic acid, but diclofenac-sodium (i.p) and aspirin (p.o) were administered 15 min before injection of acetic acid. After 5 min interval, the mice were observed (abdominal contraction, elongation of the body, and extension of the hind limb were referred to as writhing) for the next 10 min. Percentage inhibition of writhing was calculated using the following formula:

Hot Plate Test: The animals which are in the control group received water (5 ml/kg, p.o.) while the standard groups were treated with diclofenac sodium (25 mg/kg, i.p.). The animals in the test groups were treated with 100 and 200 mg/kg, per oral of Amaranthus spinosus. Then the animals were placed on Eddy’s hot plate kept at 52 ± 0.5 °C temperature. A cut off period of 28s 21, was observed to avoid damage to the paw. Reaction time was recorded when animals licked their fore or hind paws or jumped before and 0, 30, 60, and 90 min after the administration of the standard and test drugs (n=6). Percentage of elongation was calculated using the following formula:

Tail Immersion Test: The technique depends on the perception that morphine-like drugs selectively prolongs the reaction time of the typical tail withdrawal reflex in mice 22. The animals were treated as described above. One to two cm of the tail of mice was immersed in warm water, and it was kept constant at 55 ± 1 °C.  The time is taken by the mice to deflect their tails is referred to as reaction time. The first reading was discarded. Then the next three readings were recorded, and the reaction time was calculated as a mean of these three readings.

A latency period of 28 s was characterized as complete analgesia, and then the measurement was stopped to avoid injury to mice. After the administration of standard and test drugs (n=6), the latent period of the tail-immersion response was determined at 0, 30, 60, and 90 min. Percentage of elongation was calculated using the following formula:

Acute Toxicity: Oral administration of the roots Amaranthus spinosus at the doses of 500-2000 mg/kg did not produce any mortality or noticeable behavioral changes in mice within 72 h observation period. Therefore, it can be suggested that roots of Amaranthus spinosus have low toxicity profile with LD50 higher than 2000 mg/kg. 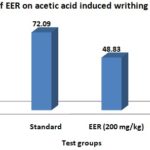 TABLE 1: EFFECTS OF THE EER ON ACETIC ACID-INDUCED WRITHING TEST IN MICE

Tail Immersion Test: In tail immersion test, maximum 67.81% and 75.93% nociception inhibition of thermal stimulus were exhibited with the EER at the doses of 200 and 400 mg/kg, bw respectively. In this study, morphine 5 mg/kg (66.55% inhibition) was used as standard Table 2.

TABLE 2: EFFECTS OF THE EER ON TAIL WITHDRAWAL REFLEX OF MICE INDUCED BY TAIL IMMERSION METHOD

TABLE 3: EFFECTS OF THE EER ON HOT PLATE METHOD 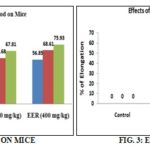 DISCUSSION: The methods which are used for investigating anti-nociception had been selected for both peripherally and centrally mediated effects. While the hot plate and the tail immersion test (thermal stimuli) investigated the central activity only, the acetic acid (chemical stimuli) elucidated peripherally and the central activity. A chemical stimulus is used in the acetic acid-induced writhing assay to screen both peripherally and centrally acting analgesic activity. Intraperitoneal injection of 0.7% acetic acid which irritates serous membranes; provokes a stereotypical behavior in rodents that is characterized by whole-body movements, contractions of the abdominal muscle; reduced motor activity and incoordination. The effective analgesic doses for agents that can be used in humans can be predicted by the writhing test 23, 24. Both doses of the extract significantly reduced the number of writhing in mice, which were induced by 0.7% acetic acid.

From the result, it could be demonstrated that Amaranthus spinosus had the effect to decrease visceral pain through a peripheral and central mechanism. Acetic acid-induced writhing can increase the peritoneal fluid levels of PGE2 and PGF2α 25. The analgesic activity of NSAIDs was exerted both peripherally and centrally. Their analgesic activity is mainly connected with their anti-inflammatory activity, which was resulted from the inhibition of prostaglandin synthesis via cyclo-oxygenase. Prostaglandin produces little pain by themselves but can increase the pain caused by other mediators (e.g., histamine and bradykinin) 26.

It was revealed from the results of acetic acid-induced writhing test that Amaranthus spinosus extracts reduced the writhing responses in mice which suggested that the mechanism of action of antinociceptive activity of the extracts is linked partially to the cyclo-oxygenase enzymes in the peripheral tissue via the inhibition of prostaglandin in synthesis and probably due to interference with the synthesis or release of endogenous substances which excite pain nerve endings 27.  In the hot plate and tail immersion tests, all the doses of the extracts prolong latency of nociceptive response, especially the higher dose of 400 mg/kg body weight. Both the doses of the extracts had the more potent analgesic activity on the tail immersion test than that in the hot plate test.

So, it can be demonstrated that the Amaranthus spinosus extract had an analgesic activity-like morphine via central mechanism through the opioid receptor at the spinal level more than the supraspinal level.  It has been revealed from the findings mentioned above that the extract effectiveness in inhibiting the centrally and thermally-induced nociception. Furthermore, the ability of the ethanolic root extract of A. spinosus to affect both the chemically and thermally-induced nociceptive response is characterized as strong analgesics like opioid agonists 28.

CONCLUSION: Medicinal plants have attracted considerable global interest in recent years. Investigation of traditional medicine is very important for the welfare of rural and tribal communities for the treatment of conventional illness. From the result of this study, it can be concluded that Amaranthus spinosus Linn. ethanol extracts possess significant peripheral and central anti-nociceptive effects in laboratory animals. The results provided experimental evidence for the traditional use of this plant in some painful conditions and also suggested the presence of biologically active principles, which may be worth of further investigation and elucidation.

ACKNOWLEDGEMENT:  Authors are grateful to Jahangirnagar University, Department of Pharmacy, Savar, and Dhaka, Bangladesh, for providing the necessary facility to carry out the study.