EVALUATION OF ANALGESIC ACTIVITY OF THE DIFFERENT FRACTIONS OF TYPHA ELEPHANTINA ROXB.

EVALUATION OF ANALGESIC ACTIVITY OF THE DIFFERENT FRACTIONS OF TYPHA ELEPHANTINA ROXB.

ABSTRACT: This study was aimed to investigate the analgesic activity of the different fractions of Typha elephantina Roxb. Analgesic activity was evaluated for peripheral pharmacological actions using the acetic acid-induced writhing test in Swiss albino mice. The result of preliminary phytochemical screening reveals that different fractions of Typha elephantina Roxb. contains alkaloids, flavonoids, tannins, and carbohydrates. All fractions at the doses of 200 and 400 mg/kg b.w. they have produced significant (P<0.05) analgesic action in a dose-dependent manner in the tested model. In acetic acid-induced writhing test, petroleum ether, carbon tetrachloride and ethyl acetate fractions of roots (400 mg/kg) inhibited maximum 62.59%, 66.14%, and 69.29% writhing respectively, whereas the writhing inhibition of the standard drug Diclofenac-Na (25 mg/kg) was 71.65%.

INTRODUCTION: Analgesics relieve pain as a symptom, without affecting its cause 1. Currently, available analgesic drugs such as opiates and NSAIDs are not useful in all cases due to their adverse effects. In this respect, new compounds with improved pain management capacity and fewer side effects are being sought with urgency. Typha elephantina Roxb. (Hogla in Bengali) belonging to the family of Typhaceae is a gigantic gregarious marsh plant with erect grass-like equitant roots and deep green spongy rootstock found throughout Bangladesh, India, and Myanmar 2. In Bangladesh, it is frequently seen in the North-Eastern part of the country especially along the banks of rivers and canals.

Typha elephantina Roxb. has been used in traditional Indian medicine as a coolant, an aphrodisiac and in the treatment of strangury, splenic enlargement, burning sensation, and leprosy. The root-stock is astringent and diuretic; employed in dysentery, gonorrhea and measles. The soft and wooly floss of male spikes and down of the ripe fruits are used in an emergency as medicated absorbent to wounds and ulcers. The rhizome of Typha elephantina Roxb. is used in various ailments such as astringent, diuretic, dysentery, gonorrhea, and measles 3. In the present study, we investigated different extracts of Typha elephantina Roxb. for its analgesic activity.

Chemicals and Drugs: Acetic acid was the product of Merck, Germany, and Diclofenac-Na was purchased from locally manufactured by Square Pharmaceuticals Ltd., Bangladesh.

Collection of the Plant: Typha elephantina Roxb. was collected from a local area of Patuakhali in July 2011. The plant was then identified by the taxonomist of Dhaka University Herbarium, Dhaka and a voucher specimen has been deposited (Coll no.-01, Accession no.-DUSH 03) for further reference.

Extraction and Fractionation of the Plant Material: The plant part was extracted by a cold extraction method. The dried and coarse powder (650 g) was extracted with methanol (3.5L) in an airtight, a clean, flat-bottomed container for 15 days at room temperature with occasional stirring. The extract was then filtered and evaporated on a rotary evaporator under reduced pressure to obtained 23 gm crude extract. The extract was further partitioned using pt. ether fraction (PEF), carbon tetrachloride fraction (CTF) and finally ethyl acetate fraction (EAF). All the fractions were evaporated by the rotary evaporator to obtain PEF 0.78 gm, CTF 0.57 gm, and EAF 0.32 gm and then subjected to analgesic activity test.

Animals: For the experiment, some Swiss albino mice (both sex, age of 3-4 weeks, weight:  20-25 gm) were collected from the animal research branch of the International Center for Diarrhoeal Disease and Research, Bangladesh (ICDDR, B). Animals were maintained under standard environmental conditions (temperature: (24.0 ± 1.0 °C), relative humidity: 55-65% and 12h light/12 h dark cycle) and had free access to feed and water ad libitum. The animals were acclimatized to laboratory condition for one week before experimentation 4. All protocols for the animal experiment were approved by the Institutional Animal Research Ethics Committee.

Acetic Acid Induced Writhing Test: The method described by Dash et al., (2011) 6 that was adopted to study the effect of the Typha elephantina Roxb extract on acetic acid-induced writing test. Test samples and control (n=6) were administered orally 30 min before intraperitoneal administration of 0.7% acetic acid, but Diclofenac-Na (i.p) was administered 15 min before injection of acetic acid. After 5 min, the mice were observed (abdominal contraction, elongation of the body and extension of the hind limb were referred to as writhing) for the next 10 min. Percentage inhibition of writhing was calculated using the following formula:

Statistical Analysis: Statistical analysis for the animal experiment was carried out using one-way ANOVA followed by Dunnet’s multiple comparisons. The results obtained were compared with the vehicle control group. P values <0.05 were considered to be statistically significant compared with the control.

Acetic Acid-Induced Writhing Test: The results showed that the different fractions of Typha elephantina Roxb. at all doses produced significant (p<0.05) inhibition of writhing reaction in a dose-dependent manner. The reference drug Diclofenac-Na was more potent than the plant extract at all dose levels Table 1.

DISCUSSION: Acetic acid induced writhing test in mice is a model of visceral pain which is highly sensitive and useful for screening analgesic drugs. Typha elephantina Roxb. plant extracts caused dose-dependent antinociception against chemical-induced pain in mice. Ethyl acetate fraction (EAF) of the plant at 400 mg/kg b.w. was found to produce the highest (69.29%) writhing response inhibitory effect. Acetic acid induced writhing model represents pain sensation by triggering a localized inflammatory response. Such a pain stimulus leads to the release of free arachidonic acid from tissue phospholipids by the action of phospholipase A2 and other acyl hydrolases 7.

The prostaglandins, mainly prostacyclins and prostaglandin-E have been reported to be responsible for pain sensation by exciting the A-fibres. Activities in the Aδ-fibres cause a sensation of sharp well-localized pain. Any agent that lowers the number of writhing will demonstrate analgesia preferably by inhibition of prostaglandin synthesis, a peripheral mechanism of pain inhibition 8.

Table 1: Effects of the different fraction of Typha elephantina Roxb. on acetic acid-induced writhing in mice 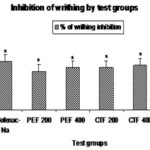 Preliminary phytochemical screening revealed that different extract of Typha elephantina Roxb. contains carbohydrates, flavonoids, tannins, and alkaloids. These compounds may be responsible for the analgesic activity. Flavonoids being powerful antioxidants 9, 10 are reported to play a role in an analgesic activity primarily by targeting prostaglandins 11, 12. So, it can be assumed that their cyclooxygenase (COX) inhibitory activity and antioxidant activity may reduce the production of free arachidonic acid from phospholipid or may inhibit the enzyme system, which is responsible for the synthesis of prostaglandins and ultimately relive pain sensation.

CONCLUSION: Based on the results of the present study, it can be concluded that the plant extract possesses analgesic potential.

However, further studies are needed to understand the exact mechanisms of analgesic action and to isolate the compound (s) responsible for this activity.

ACKNOWLEDGEMENT: The authors are thankful to Chairman, Department of Clinical Pharmacy and Pharmacology, University of Dhaka, Dhaka, for providing laboratory facilities.