ETHNOMEDICINAL, PHYTOCONSTITUENTS AND PHYTOPHARMACOLOGY OF BOMBAX CEIBA L. A REVIEW

ETHNOMEDICINAL, PHYTOCONSTITUENTS AND PHYTOPHARMACOLOGY OF BOMBAX CEIBA L. A REVIEW

ABSTRACT: Medicinal plant is the basic and most significant part of the traditional medicinal system. The different plant contains medicinal properties, also known as an herbal plant. Bombax ceiba L. plant of the Bombacaceae family shows much Pharmacological activity. It is also called as Kate Savar and Semal. It is a native plant in western Africa. It is naturally obtained in Pakistan, India, and Myanmar. Bombax ceiba L. is a big and tall tree with a height of approximately 30m and having a diameter of 58 to78 cm. It grows in a straight direction with having a cylindrical stem and wide base. Bombax ceiba L. contains principal constituents that are tannin and glycosides which are present in part of the leaf and stem. The part of the stem shows the presence of some lupeol and b-sitosterol, and the leaf shows the presence of alkaloid. The root bark contains the 3 naphthalene derivatives. Bombax ceiba L. shows many pharmacological properties. The stem bark of the plant is used for a wound. Thorn of a plant used in different formulation to treat acne problem. Androecium is used for food purposes. The leaf shows Antidiarrheal property. Root used for the treatment of Piles. Bark contains lupeol, saponins, tannins, gums and 4, 5, 7- trihydroxyflavone-3-O-β-D-glucopyranosyl (1-4)-α-L-rhamnopyranoside, n-hexacosanol. Root bark contains lactone and ether. The seed contains palmitic acid and flower contains polysaccharide. Leaves contain Shamimin. This review paper provides an overview on Pharmacological, Phytomedicinal properties of the plant.

Bombax ceiba L is a big and tall tree with a height of approximately 30 m and having a diameter of 58 to 78 cm. It grows in a straight direction with having a cylindrical stem and wide base. A tree contains a very beautiful and large flower which is pollinated mainly by birds because the flower contains nectar which is used by birds. Also, the plant contains a green leaf which is having an entire margin with an alternate spiral arrangement of leaves. Bombax ceiba L. flowering period is in January to February and fruiting period is generally from March to May. Pollination is generally done by birds and bats. Germination through seed mainly (Sint et al.) 13. Bombax ceiba L. contain principal constituent are tannin and glycosides which is present in part of leaf and stem. The part of stem shows the presence of some lupeol and b-sitosterol and the leaf shows the presence of alkaloid.

The root bark contains three naphthalene derivatives related to gossypol; it is called semi gossypol. The flower contains b-sitosterol and some traces of essential oil and some natural dyes (Faizi et al.; Meena et al.) 5 (Refaat et al.) 11. There are different medicinal uses of the plant Bombax ceiba. The part of the plant used for medicinal uses is given in the following chart (Depani et al.) 2. 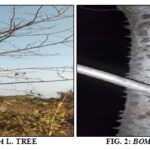 Flower: The flowers show bitter action and also shows acrid cooling, dry, astringent to the bowels, anti-inflammatory action. It removes bile and phlegm of the body and purifies the blood; it is beneficial to the spleen and shows a good response in leucorrhoea. It is also used topically to skin affections as cooling and astringent (Depani et al.) 2. It having phenolic compound (Zhang et al.) 16 (Joshi et al.) 8.

Bark: Stem bark is used in the healing of the wound and as a paste in water to skin eruptions, boils, acne, pimples. The stem bark is also used as a demulcent, styptic, and used to removes phlegmatic. Aqueous extract with curd shows great action in treatment given for dysentery with blood.

Leaves: It is used in the treatment of diarrhea used in treatment for inflammation, larvicidal activity (Hossain et al.) 6.

Root: Root bark is used for the treatment of piles. The root shows diuretic and astringent property. It is useful in biliousness, inflammations, and excessive heat of the body.

Gum: The gum is an acrid, astringent, demulcent, tonic, aphrodisiac, and removes black bile. In powder form alone or with other herbs, it is used internally to treat hemoptysis, diarrhea, dysentery, bleeding piles and menorrhagia, leucorrhoea, and spermatorrhoea, and blood disorders. Topically it is applied as a styptic, astringent, demulcent in stomatitis, dermatological ailment, and burn wound (Meena et al.) 10.

Oxytocic Effect: Bombax ceiba L. shows oxytocic activity. They mainly stem bark is used for this purpose. The stem bark is used in the case to facilitate delivery in cattle. Seed part of the plant is used as an abortifacient. Bombax ceiba L. Shows different properties like anti- analgesic, cytotoxic, and anti-hyperlipidaemic properties. It also shows the effect of various human and animal models studies.

Hepatic Disorder: Bombax ceiba L. are used in various treatment in hepatic disorder. Various part of plant like root, stem, bark, the seed used in the treatment of hepatic abnormalities or disorder.

It is the main ingredient in the anti-acne (cream) formulation of “Himalayas (Jain and Verma) 7.

Urolithiasis: The Bombax ceiba L. plant part used in the case of urolithiasis. Its young fruit part of the plant is effective against chronic inflammation and also in the case of ulceration of the bladder and in kidneys. It shows activity in calculus affection also.

Wound: The stem bark part of plant Bombax ceiba L. is used for the treatment of wound. Its paste forms help in the healing of the wound.

Other uses of the Plant Bombax ceiba L. 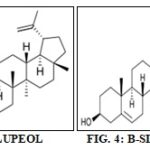 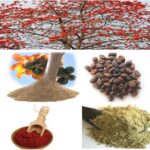 CONCLUSION: The above literature survey revealed that Bombax cebia L contains so much medicinal properties. It is used in many herbal formulations and traditional medicinal systems. It contains many phytoconstituent, which shows great medicinal properties. Bombax ceiba L shows antioxidant, larvicidal, diuretic, tonic, anti-leprosy, expectorant properties. It is also used in treatment in blood purifier, inflammation of the bladder, kidney calculi affection; it shows antimicrobial, analgesic, oxytocic, urolithiasis property. It is also used in sexual disorder and acne problem. Its part also shows medicinal properties like thorn used in acne problems. Root used in piles. Stem bark is used in the wound and leaf part used in the treatment of diarrhea.

ACKNOWLEDGMENT: I would like to thank my entire classmate, who helped me during this work. Especially my guide Shweta Saboo mam.