ABSTRACT: To analyze the efficacy of topical nepafenac, 0.1% eye drops in the treatment of diabetic macular edema (DME). Method: a prospective interventional study in 14 eyes having center involving DME were taken into consideration. They were administered topical nepafenac eye drops 0.1% thrice daily for 6 months. Their vision and foveal thickness were recorded systematically at the start of the treatment and then at 2nd, 4th, and 6th month follow up. Results: The mean baseline and final Log MAR visual acuity were 0.33 and 0.15, respectively and the mean baseline and final foveal thickness were 450 µm and 290 µm respectively. Conclusion: A statistically significant improvement was noticed in the visual acuity and foveal thickness after the administration of 0.1% of topical nepafenac eye drops.

INTRODUCTION: Diabetic macular edema is one of the common causes of decreased vision in patients having diabetic retinopathy 1. The focal laser was the initial modality of treatment for clinically significant macula edema. Early treatment diabetic retinopathy study (ETDRS) showed that focal laser reduced the risk of visual loss by 50%. But however focal laser treatment is associated with various side effects like scotoma, reduced color vision, vision loss due to the formation of choroidal neovascular membrane, subretinal fibrosis formation, migration of hard exudates into the foveal center, enlargement of the laser scars towards the foveal center. Hence, various other treatment modalities were looked in to and evaluated, which included intravitreal injections of steroids, agents that target vascular endothelial growth factors (VEGF).

Intravitreal injection of triamcinolone for DME was effective for a short period and again was associated with adverse effects like the development of cataract, increase in the intraocular pressure as was seen in nearly 50% of the patients. Anti VGEF agents were effective in DME 2. But it required repeated injections, which carried an increased risk of endophthalmitis. Hence, a safer alternative modality of treatment became necessary. It is known that inflammation plays a key role in the pathogenesis of diabetic retinopathy.

Cyclo oxygenase-2 (COX-2) is up-regulated in the retina in diabetic individuals, which in turn leads to increased production of prostaglandins E2 (PGE2), which is an important mediator of inflammation. An elevated PGE2 leads to increased VEGF in diabetic retinopathy and also leads to retinal endothelial cell degeneration. Nepafenac is a non-steroidal anti-inflammatory agent. It is a pro-drug and gets converted to Amfenac by intraocular hydrolases, which inhibits both Cox 1 and 2. In a study conducted on a rat model, it was shown that topical nepafenac inhibits diabetes induced retinal microvascular abnormalities. Topical nepafenac reaches its bioactive concentration in the posterior segment.

METHODS: A prospective interventional case study was done on patients who came to the ophthalmology OPD and was confirmed to have a center involving DME. Written consent was taken from the patients prior to the procedure. The patients were administered topical nepafenac eye drops 0.1% three times a day.

The patients were followed up on the 2nd, 4th, and 6th month and during each follow-up up, their visual acuity and CMT were recorded. Snellen’s chart was converted into Log MAR for analysis. Wilcox on signed-rank test for visual acuity analysis and paired T-test for CMT were used. The software used was state 13.

RESULTS: In our study, 14 eyes were taken into consideration. Fig. 1 shows the sex distribution of the patients that had 10 male and 4 female patients having an average age distribution of 56 years, as seen in Fig 2. 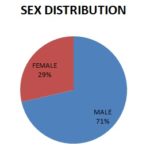 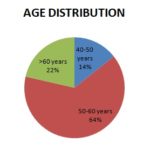 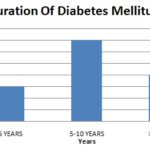 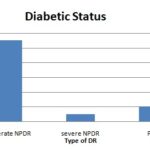 FIG. 4: SHOWS THE DIABETIC STATUS OF THE PATIENTS

DISCUSSION: It is seen that in diabetic retinopathy, there is an increase in the production of prostaglandins. Inhibition of PG production helps to prevent diabetic retinal microvascular abnormalities 3.

In a study done by Baudoin et al., he said that aspirin, which is an anti-inflammatory agent, tends to inhibit the mean yearly increase in the number of microaneurysms, but it was contrary to the ETDRS study which revealed that aspirin did not have any beneficial effect on diabetic retinopathy. Another study showed that Celecoxib, which is a Cox-2 inhibitor, only helps to decrease the fluorescein leakage and has no drastic effect on the visual outcome in DME 4. Nepafenac inhibits both Cox1 and COX-2 5 and has an overall effect on prostaglandin production, which plays a key role in the pathogenesis of diabetic retinopathy. Since there is most of the time a drop in the vision in patients with DME and the necessity to undergo repeated anti VGEF injections for the treatment of DME, topical nepafenac was considered as a therapeutic measurement. In our study, the use of topical nepafenac showed a positive result in the visual outcome.

The study showed that 7 eyes had an improvement in the vision, 6 eyes maintained the same vision, and 1 eye had a drop despite having a reduction in the CMT. 11 eyes had a decrease in the CMT, and 3 eyes had an increase in the CMT during the final follow up. It was noted that none of the patients had any side effects due to topical nepafenac.

Limitation: Our study had a limitation as the sample size was small, and the systemic control status of the patients was not adequate. Considering the beneficial effect of topical nepafenac in the treatment of center DME, a larger study group could also be taken and assessed.

CONCLUSION: Topical nepafenac is a safe and cost-effective option in the treatment of DME. It can be used as a therapeutic optic in cases of DME with good vision and in patients who have multiple systemic Co-morbidities such as uncontrolled hypertension, diabetes, recent myocardial infarction, and stroke. It is also helpful in conditions where the usage of anti-VGEF needs to be contraindicated or used with extra caution.