INTRODUCTION: Kidney stone disease is as old as humans and has been found in the tombs of Egyptian mummies dating back to 4000 BC 1. In the past, it was considered a disease with terrible upshots which frequently lead to death. The epidemiology of kidney stone in a given population varies according to the geographical area, climate and season. Pakistan is situated in the Afro-Asian stone belt 2. Most of the cases of kidney stones have been reported in the summer rather than the winter in a given population 3. People of all ages are susceptible to kidney stone disease.

Prevalence of kidney stone varies according to the sex, and 20% of the females and 4% of the males are affected by this disease 4. The changes in dietary habits, such as having fast food rather than traditional food, increase the chance of stone formation, as well as abnormal intake of fast foods, soft drinks, sodium, and oxalate-containing vegetables and fruits take part in the progression of kidney stone disease 5.

Calcium oxalate crystallization is a very complex and fundamental step in the formation of kidney stones. This process includes; urinary super-saturation, crystal nucleation, crystal growth, aggregation, and crystal-cell interaction. Many researchers have proposed in-vitro assay to evaluate the activity of different plant’s extracts along with their isolated or synthesized compounds against kidney stone 6. This study is based on in- vitro kidney stones formation in artificial urine containing pathological calcium oxalate monohydrate crystals and their modulation or morphological change into non-pathological calcium oxalate dihydrate crystals 7 by a variety of soft drinks acting against these kidney stones in- vitro. This activity can be determined by spectro-photometry 8 and microscopy 9.

Soft Drinks: Different varieties of soft drinks were purchased from the departmental store of Karachi which included Slice, Mirinda, Mountain dew, 7up, and Pepsi. Approximately 5, 10, 15 and 20 µL of each drink were used for this study to evaluate the activity against calcium oxalate monohydrate kidney stone.

Spectrophotometric Analysis: After making artificial urine in a 96-well flat-bottomed plate by mixing 100 µL calcium chloride (4 mmol/L), 100 µL sodium oxalate (0.5 mmol/L), 200 mmol/L sodium chloride and 10 mmol/L sodium acetate, calcium oxalate stones were induced in-vitro 8. This artificial urine was adjusted to 5.7 pH. The optical density was measured after each five minutes interval throughout 80 min at 620 nm at 37 °C using a Sunrise Microplate Reader (Tecan, Austria GmbH) with and without the addition of different soft drinks during crystallization in artificial urine.

Microscopic Studies: After the spectrophotometric determination, the effects of soft drinks were observed on calcium oxalate monohydrate crystals under the Differential Interference Contrast (DIC) microscope. Using polarized light, crystals were distinguished on the bases of their morphology. A Nikon Eclipse TE2000-E microscope (Nikon, Japan) and Nikon DXM 1200C camera were used to obtaining the images. The images were analyzed by using NIS-Elements image analysis software AR 3.2 (Nikon, Japan).

Statistics: Statistical calculations were performed by Microsoft Excel 2003 and p-value of 0.001-0.05 was measured to be significant in t-tests.

RESULTS AND DISCUSSION: To determine the activity of soft drinks against kidney stone in-vitro, calcium oxalate monohydrate crystallization were analyzed by spectrophotometry and observed under DIC microscope and results are described in Table 1. 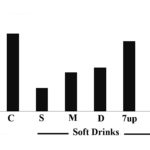 Spectrophotometric analysis Fig. 1 showed that slice has considerable effect against in-vitro calcium oxalate monohydrate crystals than Mirinda and Mountain dew by decreasing the optical density at 620 nm as compared with control. No change was observed in the optical density of 7up and Pepsi when reading against a control group containing calcium oxalate monohydrate crystals. 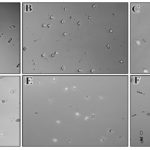 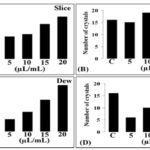 FIG. 3: IN-VITRO EFFECT OF DIFFERENT DOSAGE OF SOFT DRINKS ON COUNTING OF CALCIUM OXALATE STONES. Soft drinks affected on a number of stone by different manners and showed activity against calcium oxalate crystals. Slice (A), Mirinda (B), Mew (C) and 7up (D) showed different effects on crystals number. 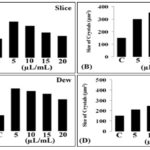 FIG. 4: IN-VITRO EFFECT OF DIFFERENT DOSAGE OF SOFT DRINKS ON SIZE OF CALCIUM OXALATE STONES. Soft drinks affected on the size of stone by different manners and showed activity against calcium oxalate monohydrate crystals. Slice (A), Mirinda (B), Dew (C) and 7up (D) showed different effects on crystal size.

CONCLUSION: In this study, we suggested that soft drinks effect on calcium oxalate monohydrate kidney stone. Effect of soft drinks including Slice, Mirinda, Mountain dew, 7up and Pepsi was evaluated to determine in-vitro activity against calcium oxalate kidney stones by using spectro-photometry and DIC microscope. Slice was observed with significant and Mirinda as well as mountain dew showed moderate activity against kidney stone whereas 7up and Pepsi did not show any effect against in-vitro calcium oxalate monohydrate crystals. Slice, Mirinda and Mountain dew greatly affected the stone formation and reduced the stone size but increased the stone number.

These changes in crystals morphology are beneficial because COM crystals are associated to bind with cells of the damaged kidney to produce kidney stone disease. Physiological COD crystals are harmless because they are less able to adherence to damaged kidney cells and excreted out from the body through the urination.