EFFECT OF COOKING METHODS ON BIOACTIVE COMPOUNDS IN VEGETABLES

EFFECT OF COOKING METHODS ON BIOACTIVE COMPOUNDS IN VEGETABLES

ABSTRACT: Vegetables are very rich in health-promoting phytochemicals like flavonoids and phenolic compounds. The objective of the study was to investigate the effect of commonly used cooking (i.e., open and pressure cooking) methods on phytochemical content (i.e., polyphenols, flavonoids) and antioxidant activity levels as measured by DPPH and FRAP assay. Results showed that cooking methods have a great effect on phytonutrients and caused significant losses of flavonoids and increase in phenolics and antioxidant activity levels when compared with raw vegetables. Bitter gourd scored the highest mean value, 1033.8 mg GAE/100g, and drumstick scored the lowest mean value, 222.3 mg GAE/100g, for total phenolic content. The flavonoid content ranged between 14.18 to 91.7 mg RE/100g in the selected vegetables. There was a significant increase (p< 0.01% and p<0.05%) in antioxidant activity levels in vegetables upon both open and pressure cooking.

INTRODUCTION: Vegetables contain dietary antioxidants, such as water-soluble vitamin C and phenolic compounds, as well as lipid-soluble vitamin E and carotenoids, contribute to both the first and the second defense lines against oxidative stress. As a result, the consumption of vegetables may protect humans from chronic angiogenic diseases, such as cardiovascular diseases, chronic inflammation, arthritis, and cancer 1, 2, 3, 4, 5. The phenolic metabolites, including tocopherols, flavonoids, phenolic acids, alkaloids, chlorophyll derivatives, or carotenoids 6, 7, possess the high antioxidant capacity and have significant health benefits 8.

The fruits are mostly consumed in raw form, but vegetables need to be cooked to enhance their palatability and taste. However, cooking brings about several physical and chemical changes in vegetables 9. These changes could be both beneficial and detrimental depending on the extent and type of treatment conditions. The cooking treatments like boiling, microwaving, baking, frying, and griddling lead to changes in texture and nutritional properties of the vegetables 10.

Studies have reported that cooking softens the cell walls, which lead to an increase in the extraction of carotenoids 11. However, other studies have reported that cooking can also lead to a loss in essential vitamins, antioxidants, water soluble, and heat-labile compounds. The extent of loss is dependent on the type of cooking treatment 12 and the phytochemical compositions of the cooked vegetable 13. Cooking processes may affect the antioxidant content of food due to antioxidant release, destruction, or creation of redox-active metabolites 14. Antioxidant compounds, such as ascorbic acid and some carotenoids, are very sensitive to heat and storage.

Conversely, polyphenols have shown a certain stability when exposed to high temperatures 15. Previous studies conducted on different vegetables showed that, after cooking, total polyphenol content and antioxidant activity of samples could be higher or lower compared to fresh vegetables. For example, Faller and Fialho, 2009 15 showed that cooking decreased the antioxidant capacity for most of the vegetables and small differences found between the cooking methods applied.

Based on above the facts, the present study was carried out to investigate the effect of common domestic cooking processes, open cooking, and pressure cooking, on phenolics and flavonoids and total antioxidant capacity of commonly grown and consumed vegetables in Telangana state, India.

Pressure Cooking: The edible portion of vegetables was placed in a pressure cooker, containing water (1000 ml) and a pressure valve for high pressure-cooking and cook till the first whistle. The pressure was slowly released, and the cooked samples were cooled rapidly on plenty of ice.

Extraction of the Sample: 80% methanol acidified with 6N hydrochloric acid (pH 2.0) was used as a solvent for extracting the samples from the vegetables.

Statistical Analysis: All data were presented as means ± standard deviation. Differences between variables were tested for significance by using the ANOVA test, followed by multiple comparisons.

The total TPC content of selected vegetables within the group and between the treatments (raw (C), open (T1), and pressure cooking (T2)) showed a significant increase at 1% level.

In India, open cooking and pressure cooking methods are popularly used means for preparation of recipes with vegetables. This study indicated that the different food processing methods did not affect the phenolic compounds in the vegetables. Phenolic compounds in vegetables are present in both soluble forms and combined with cell-wall complexes. Studies performed on different vegetables after cooking show that the total polyphenol content and antioxidant capacity could be either higher or lower in comparison to fresh food. The cooking treatment usually causes significant changes in the total phenolic content in the vegetables 21. The dissimilarity may have been due to the differences in the extraction and cooking methods. The loss could be due to phenolic breakdown during cooking 16. The gain could be to the decomposition of some polyphenols bound to the dietary fiber of vegetables releasing free phenolic compounds that increase their detection 22. Yamaguchi et al., (2001) 23 has told that heat treatment usually leads to inactivation of polyphenol oxidase and other oxidizing enzymes, which in turn slows down the phenolic destruction by oxidation on exposure to the surrounding environment and deactivation of these enzymes avoid the loss of phenolics and, therefore, lead to the increase in total phenolic content.

In a study carried out by Ismail, 24 spinach was found to have the highest TPC, followed by swamp cabbage, kale, shallots, and cabbage after cooking like boiling, steaming, microwaving and this increase was not significant (p<0.05). 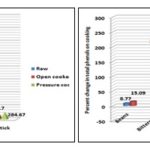 The total flavonoid content of selected vegetables was compared within the group and between the treatments, i.e., raw (C), open (T1), and pressure cooking (T2). The results showed that the reduction in flavonoids content was at 1% significance difference level in bitter gourd and cluster beans; whereas in beans and drumsticks the reduction in flavonoid content was at the significant difference level of 5%. 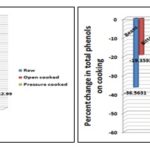 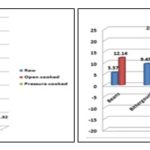 The total AOA content of selected vegetables in FRAP method was compared with the group of selected vegetables and between the treatments, i.e. raw (C), open (T1) and pressure cooking (T2) and found AOA in FRAP method was decreased in cluster beans and increased in drumsticks and beans at 1% level and 5% level respectively whereas bitter gourd showed no significant difference in total AOA upon cooking.

DPPH Method: The mean values for DPPHRSA in selected vegetables and the percent difference between the control and treatment extracts are shown in Table 4 and Fig. 4.

The range of increase in total AOA of selected vegetables in open cooking was ranged between 6.91% and 13.93%, while in pressure cooking it was ranged from 4.18% to 54.8% when compared to raw. 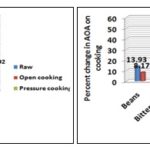 The total AOA content of selected vegetables in DPPH method was compared with the group of vegetables and between the treatments, i.e., raw (C), open (T1), and pressure cooking (T2). The results showed that a significant increase in total AOA content was observed at 1% level in beans, bitter gourd, and cluster beans except for drumstick, it showed 5% significant difference level. Cooking procedures led to an increase in antioxidant activity in vegetables. This effect is perhaps due to the production of redox-active secondary plant metabolites or breakdown products but is highly likely to be related to release of antioxidants from intracellular proteins, changes in plant cell wall structure, matrix modifications, and more efficient release of antioxidants during homogenization. Conversely, boiling reduces the antioxidant activity of beet, turnip, red cabbage, white cabbage, and broccoli. Microwave cooking of beet, black radish, red cabbage, broccoli, and white cabbage resulted in a significant reduction (P<0.01) of antioxidant activity when compared to the respective raw state. Stir-frying increased the antioxidant activity of red radish, broccoli, and white cabbage. Wachtel-Galor et al., 2008 14 showed that the effects of cooking on antioxidant capacity of different vegetables might be different. According to Saikia and Mahanta, 2013, beetroot has shown an increase in radical scavenging activity of cooking and metal chelating capacity (MCC) was not detected.

Application of heat during cooking involves changes in the structural integrity and cellular matrix of the vegetables, and this causes both positive and negative effects on the phytochemical properties. It was observed that cooking caused a significant change in the phenolic and flavonoid content in the selected vegetables. Usually, thermal treatments have the destructive effect of the flavonoid and phenolic compounds as they are highly unstable compounds 24. In some cases, an increasing trend in phenolic and flavonoid content was observed upon thermal treatment. These could be due to the breakdown of the cellular matrix, which helped in the binding of the total phenolics with pectin or cellulose networks and making them more extractable into the solvents. Moreover, in some instances, the application of heat could cleave the phenolic-sugar glycosidic bonds resulting in the formation of phenolic aglycons, which has high reactivity with Folin Ciocalteau reagent and thus leads to an increased value of total phenolic content 17. Apart from that, the phenolics can be hydrophilic or lipophilic depending on their solubility pattern. The overall difference in the results of the total phenolics and flavonoids of the selected vegetables could be due to the presence of different phenolic groups in the vegetables and their susceptibility to change or destruction during the three cooking treatments. Cooking treatments altered the TPC and TFC of the vegetables, although the direction of change and extent of change was not uniform across all vegetables and all treatments.

ACKNOWLEDGEMENT: This work has been supported by the Indian Council of Agricultural Research (ICAR), Central Institute for Women in Agriculture (CIWA) and AICRP-Home Science, PJTSAU.