ABSTRACT: Aim: The objective of this study was to evaluate the effect of Commiphora mukul on psoriasis. Materials and Methods: Six female Balb/C mice per group of which, the first three groups served as untreated, disease controls and standard (0.1% dexamethasone) respectively. Animals of groups 4, 5 and 6 were applied 0.5, 1 and 2% of the C. mukul extract on both the ears, respectively. Dermatitis was induced in mice by the application of oxazolone 1.5% (100 µL in ethanol) to the abdominal region for six days. Starting seven days following sensitization, 20 µL of oxazolone 1% in a mixture of acetone and olive oil (4:1) was applied to both sides of the mouse ear on days 7, 10, 13 and 16. For detailed time-course analysis of swelling ear reactions, ear thickness was measured before the sensitization phase (day 7) and after each elicitation on days 10, 13, 16 and 19. Results: C. mukul potently suppressed ear swelling at each time-point. The suppressive rates of C. mukul at concentrations of 0.5, 1 and 2% were 47.3, 55.4 and 62.2% on day 16, respectively as compared to the disease control. Microscopic examination revealed a relatively swollen ear in the disease model as compared to the control animals. Whereas condition was gradually improved in treated groups dose-dependently. Conclusion: The results suggest that C. mukul improves chronic inflammatory skin disorders.

INTRODUCTION: Psoriasis is a common, immune-mediated, multifactorial disease. It is characterized by its vast phenotypic diversity and genetic heterogeneity. Psoriasis has an unknown etiology affecting 1 to 3% of Caucasians 1. The most frequently affected than other ethnic groups were the Caucasians 2 the rationality behind these variations is unclear. However, it is likely that both genetic and environmental factors play a role.

Psoriasis Vulgaris, the most common form of psoriasis, is characteristic of sharply demarcated, red, and scaly symmetrical plaques on the elbows, knees or scalp 3. It is a chronic inflammatory disease of the skin characterized by epidermal hyperplasia, dermal angiogenesis, infiltration of activated T cells, and increased cytokine levels.  T cell-mediated immunity 4-7 in which cytokines play an essential role is considered to be the key element in the disease process.

Corticosteroids, immunosuppressants and non-steroidal anti-inflammatory drugs that inhibit cyclooxygenase (COX)-2 are being used clinically for the treatment of psoriasis. Systemic therapies with drugs such as acitretin, methotrexate, cyclosporine, hydroxyurea, and thioguanine revealed significant systemic toxicity that needed to be followed carefully. Dramatic skin atrophy is characteristic of corticosteroids upon repeated application on the dorsal skin of rats 8-10.

Commiphora mukul is found to grow in the wilder parts of the Indian states, especially Rajasthan, Karnataka, Maharashtra, Gujarat, Assam as well in neighboring countries viz., Afghanistan, Baluchistan, Arabia, and northeast Africa in dry rocky areas 11-13. It has been used for nearly 3000 years in Ayurvedic medicine, mainly as a treatment for arthritis. However, no scientific evidence or publications are available to support C. Mukul's therapeutic effect towards psoriasis, though used traditionally throughout the world.

The study of the anti-psoriatic effect of C. mukul conducted in the oxazolone-induced mouse contact dermatitis model provides a rational scientific proof that the herb indeed has the potential to treat psoriasis.

A total of 36 female Balb/C mice randomized into six groups consisting of six animals per group were used for the study. Group 1 animals were used as an untreated control, which did not undergo any sensitization or elicitation procedures and treatment during the study. Dermatitis was induced to the animals of groups 2 to 6 with oxazolone. Group 2 animals served as the disease control not receiving any treatment with the C. mukul extract. Group 3 animals were treated by ear application, with 0.1% dexamethasone. Animals of groups 4, 5 and 6 received 0.5, 1 and 2% of the C. mukul extract on both the ears, respectively. The dose volume was maintained at 20 mL uniformly.

Sensitization and Elicitation (Challenge Application) Procedure: The animals were sensitized by applying 100 µL of 1.5% oxazolone in ethanol to the abdominal region of the animals for six days. Seven days after sensitization, 20 µL of 1% oxazolone in a mixture of acetone and olive oil (4:1) was applied to both sides of the mouse ear on days 7, 10, 13 and 16. Sensitization and elicitation (challenge) treatments were carried out to induce dermatitis in the animals.

Animals were euthanized, and mouse ears were excised, fixed in 10%-buffered formalin solution, embedded in paraffin, cut into 5 mm sections and stained with hematoxylin-eosin, 72 hours after the last application of oxazolone, by standard methods. During the histopathological evaluation, after the microscopic fields were photographed, the epidermal thickness was measured as the distance from the bottom of the stratum corneum to the basement membrane in the interfollicular epidermis (Reynolds et al., 1998).

Inhibition of ear swelling (%), ear weight and epidermal thickness were calculated according to the following equation: 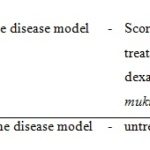 RESULTS AND DISCUSSION: Topical administration of C. mukul in an oxazolone-induced dermatitis mouse model to the ear of the disease model group (Group 2) revealed erythema (reddening of the skin), edema and abrasion of the skin occasionally.

The positive agent (dexamethasone 0.1%) potently suppressed oxazolone-induced ear swelling (P£0.01) at the rate of 76% on day 16 Table 1. It is widely recognized that the secretion of cytokines by keratinocytes in response to injury, particularly TNF-α and IL-1α are key mediators of the cutaneous inflammatory response 14-15. C. mukul at the concentrations of 0.5 and 1% potently suppressed (P£0.05) ear swelling at each time-point Table 2 whereas C. mukul at the concentration of 2% potently suppressed (P£0.01) ear swelling at each time point Table 2. The rate of suppression by C. mukul 0.5, 1, and 2% were 47.3, 55.4% and 62.2% on day 16, respectively as compared to the disease control Table 1. C. mukul treatment has been shown to reduce cytokine-induced activation of some pro-inflammatory genes in endothelial cells and macrophages, including vascular cell adhesion molecule-1, cyclooxygenase-2, and IL-6. Thus, the anti-inflammatory effects of C. mukul activation could occur at both the induction of TNF-α and IL-1 and the downstream effects of these cytokines on other cells in the skin 16-17. Oxazolone treatment of sensitized animals produced a significant increase in ear weight (P£0.05) as compared to normal control animals. A dose-dependent (P<0.05 and P<0.01) decrease in ear weight Table 3 was observed. Topical treatment of C. mukul at 0.5, 1, and 2% reduced oxazolone-induced inflammation of ear weight by 42.2, 54 and 69.2% respectively, as compared to the disease control Table 1. Dexamethasone 0.1%, used as a reference drug, also exhibited inhibition (74.5%).

TABLE 1: EFFECT OF C. MUKUL AND DEXAMETHASONE ON THE INHIBITION OF THICKNESS, WEIGHT AND EPIDERMAL THICKNESS OF MOUSE-EAR INDUCED BY REPEATED APPLICATION OF OXAZOLONE

TABLE 2: EFFECT OF C. MUKUL ON THE THICKNESS (MM) OF MOUSE-EAR INDUCED BY REPEATED APPLICATION OF OXAZOLONE

TABLE 3: EFFECT OF C. MUKUL ON THE CHANGE IN WEIGHT (G) AND EPIDERMAL THICKNESS (µM) OF MOUSE-EAR INDUCED BY REPEATED APPLICATION OF OXAZOLONE 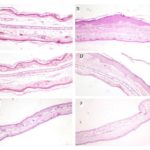 CONCLUSION: The results obtained from the study suggest that C. mukul improves chronic inflammatory skin disorders probably through the inhibition of TNFa produced by macrophage cells and interferon-γ produced by the Th1 cells.