ABSTRACT: Herbal medicines have attracted the researcher's attention nowadays AS scientific evidence is regularly coming on their safety and efficacy. The present study of Hobibatul Katan Murakkab (Granules of Flaxseeds Compound) was undertaken to standardize the classical clinically proved effective Unani compound formulation “Hobibatul Katan Murakkab (Granules of Flaxseeds Compound)”. The study revealed the presence of Alkaloids, Glycosides, Tannins, and Fats. The presence of phytochemical compounds shows the potential of the compound in the field of medicine, as has been claimed by the Unani Physicians centuries ago. Preliminary phytochemical screening of the compound formulation has been done on a small scale. The formulation may be standardized on a large scale with full parameters of compound formulations of herbal medicine.

INTRODUCTION: Herbal medicines have attracted the researcher's attention nowadays as scientific evidence is regularly coming on their safety and efficacy. There is a need to standardize the single and compound formulations of Unani medicine for better clinical results. Ministry of AYUSH GOI had published the Unani Pharmacopoeia of India Part-I, II in many volumes, and it is an ongoing process. The present study was undertaken as part of a single-blind, randomized control trial of an Unani compound formulation in Iltehab Tajaweefe Anaf Muzmin (CRS). Unani physicians have been treating Iltehab Tajaweefe Anaf Muzmin for many centuries and have mentioned various Unani drugs (single as well as compound) in classical Unani literature for this disease. A well-known Unani formulation from classical literature with composition: Katan (Linum usitatissimum Linn.), Filfil Siyah (Piper nigrum Linn.) and Honey with Inkebab of Kalonji (Nigella sativa Linn.) in the treatment of Chronic Rhinosinusitis was selected for clinical study 1. This compound formulation with its ingredients and Kalonji has been standardized for quality purposes. This formulation has been named as Hobibatul Katan Murakkab. This oral formulation, along with in kebab of Kalonji has been proved very effective in CRS in clinical trial 2.

MATERIAL AND METHODS: All the herbs were procured from the local market. The drugs were identified in the Pharmacognosy lab, Department of Botany, Jamia Hamdard, New Delhi. The granules dosage form was prepared as per the method prescribed in classical Unani literature. The single drugs were standardized on the following parameters.

Moisture Contents: The moisture contents of the drug were evaluated with the loss of weight on drying at 105 degrees Celsius according to Anonymous 3.

Ash Values: The percentage of total ash, acid insoluble ash, and water-soluble ash were determined according to Anonymous 3.

Extractive Values: The successive extraction of drug was evaluated with the help of    Soxhlet’s apparatus in different organic solvents i.e., petroleum ether, chloroform, methanol and water, according to Anonymous 4.

Chemical Analysis: The following procedures carried out the qualitative and quantitative chemical analysis of the test drug.

Starch Estimation: The calibration curve for a standard starch solution at different concentrations was obtained as follows; 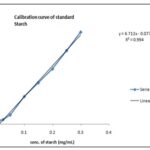 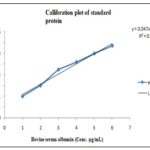 Protein Estimation: The calibration for standard protein (bovine serum albumin) is as follows. Thus 5gm of test formulation has 5.1987 mg Protein which is very significant. 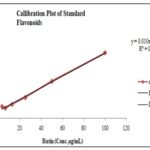 Thus total phenolics content at a concentration of 100 µg/mL is 51.69 gallic acid equivalents.

Determination of Total Flavonoids Content: Flavonoids have anti-allergic anti-inflammatory and anti-microbial actions 9. The total Flavonoids in 5gm of test drug at concentration of 50 µg/mL are 41.1165 µg. The standard calibration curve of Rutin standard flavonoids is given below.

DISCUSSION: Single drugs of Unani Medicine like Katan, Filfil Siyah, and Kalonji has already been standardized by CCRUM 10. This part has been repeated in brief for quality purposes and proper identification of the drugs before the clinical study. Preliminary phytochemical screening of the compound formulation revealed the presence of Alkaloids, Glycosides, Tannins, and Fats. The quantitative estimation of Starch, Protein, Phenolics, and Flavonoids has been determined. The presence of phytochemical compounds shows the potential of the compound in the field of medicine as has been claimed by the Unani Physicians centuries ago.

ACKNOWLEDGMENT: I am thankful to Jamia Hamdard University for granting me the financial assistance to carry out this study as part of my MD thesis. I am also grateful to all the staff of Ilmul Adviya Lab for their moral and physical support during the standardization work.