DIGITALIS PURPUREA: AN OVERVIEW ON PHYTOCHEMICAL AND PHARMACOLOGICAL PROFILE

DIGITALIS PURPUREA: AN OVERVIEW ON PHYTOCHEMICAL AND PHARMACOLOGICAL PROFILE

ABSTRACT: Digitalis purpurea commonly known as foxgloves belong to the genus Digitalis, which is a member of the family Plantaginaceae. Due to their effectivity in the treatment of heart insufficiency, cardenolides from Digitalis have been used extensively worldwide. Digitalis purpurea is the most important source of cardiac glycosides or cardenolides, volatile oil, fatty matter, starch, gum, and sugars. They possessed cardiovascular, cytotoxic, anti-diabetic, antioxidant, insecticidal, immunological, hepatoprotective, neuro-protective and cardioprotective effects. This review highlights the plant profile, history, chemical constituents, chemical test, traditional uses, drug interaction and pharmacological effects of Digitalis purpurea.

INTRODUCTION: The plants provided food, clothing, shelter, and medicine. As time went on, each tribe added the medicinal power of herbs in their area to its knowledge base 1. Seventy-five percent of the world’s population used plants for therapy and prevention 1. However, plants are a valuable source of a wide range of secondary metabolites, which are used as pharmaceuticals, agrochemicals, flavors, fragrances, colors, bio-pesticides and food additives 2, 3. D. purpurea was named by the Swedish botanist Carl Linnaeus in his pivotal publication species Plantarum in 1753. The generic name Digitalis comes from the Latin for finger (digitus), referring to the shape of the flowers. The specific epithet purpurea refers to the color of the flowers, which are frequently purple (although a white-flowered form is fairly common).

Common foxglove is a popular ornamental, and many hybrids and cultivars are available 4. The physician/scientist credited with bringing Digitalis into mainstream medicine is William Withering. Foxglove had already been in use as a traditional herbal remedy for “dropsy,” the swelling that often accompanies heart failure 5. In the 1780s, Withering observed the remarkable effectiveness of Digitalis/foxglove in a woman who had dropsy, and he began a rigorous study of the drug. Digitalis is a drug that has been used for centuries to treat heart disease. The other uses of digitalis include asthma, epilepsy, tuberculosis, constipation, headache, spasm, wounds, and burns, causing vomiting and other conditions.

The plant's name, Digitalis (from the Latin digit, finger) describes the finger-shaped purple flowers it bears. The tall flower spikes with charming tubular flowers of foxglove add both height and vertical accent to your garden without staking. Perennial Digitalis blooms attract hummingbirds and bees and a bonus, the deer do not like the foliage 6. Digitalis purpurea contains cardiac glycosides, volatile oil, fatty matter, starch, gum and sugars.

Botanical Description: It is a biennial or perennial herb. It is about 1 to 2 meters in height. Flower and Fruit: The flowers are carmine red with white edged spots on the inside. The flowers appear in long hanging racemes. They have 5 free, short-tipped sepals. The corolla is about 4 cm long, campanulate, bilabiate with an obtuse upper lip and an ovate tip on the lower lip. The flower is glabrous on the outside and has a white pawn on the inside. There are 2 long and 2 short stamens, and 1 superior ovary. The fruit is a 2-valved, ovate, glandular, villous capsule.

The plant with a branched taproot. In the first year, it develops a leaf rosette. In the second it produces a 2 m high, erect, unbranched, gray, tomentose stem. The leaves are alternate, ovate, tapering upward and petiolate. Almost all leaves are crenate; only the highest ones are entire-margined 9, 10. 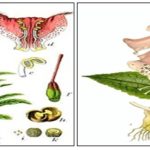 Biological Source: Digitalis consists of dried leaves of Digitalis purpurea Linn., family-Scrophulariaceae. After collection leaves are dried immediately at a temperature below 60 ºC and they contain no more than 5% moisture. After drying leaves are stored in moisture-proof container.

Cultivation and Collection: The seed of digitalis are small in size, so they are mixed with sand for sowing. Leaves are collected in both the years but leaves collected when 2/3 of flowers are fully developed. The seedling is then transplanted into the field. Generally, the leaves are collected in the early afternoon, with the belief that maximum cardio-active glycosides are present at that time. The leaves are immediately dried after collection below 60 ºC and dried leaves are stored in airtight containers. The dried leaves should not contain more than 5% moisture since it promotes hydrolysis of cardiac glycosides resulting in loss of cardiac activity 15.

Venation: Pinnate, mid-rib, lateral vein, veinlet, and still smaller vein let prominent on the under- surface; lateral vein leaves the midrib, at an acute angle and anatomies on the margin.

The plant is cultivated as an ornamental 14.  Foxglove is used for congestive heart failure (CHF) and relieving associated fluid retention (edema), irregular heartbeat, including atrial fibrillation and flutter. Also used in asthma, epilepsy, tuberculosis; constipation; headache; and spasm. It is also used to cause vomiting and for healing wounds and burns 11, 14. 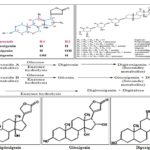 Four different glycosides including acteoside, purpureaside A, calceolarioside B, and plantain side D were isolated from the leaves of Digitalis purpurea 18.

The Minerals: Boron (B), chromium (Cr), manganese (Mn), cobalt (Co), nickel (Ni), copper (Cu), arsenic (As) and lead (Pb), in various plant parts of Digitalis purpurea at pre and post-flowering stages were determined. The concentration of most of the minerals was higher at post flowering than that of pre-flowering stage 19.

Raymond’s Test: To the drug, add a few ml of 50% ethanol and 0.1 ml of 1% solution of m- dinitrobenzene in ethanol. To this solution, add 2-3 drops of 20% sodium hydroxide solution. Violet coolers appear, this is due to the presence of an active methylene group.

Legal Test: To the drug, add a few ml of pyridine and 2 drops of nitroprusside and a drop of 20% sodium hydroxide solution. A deep red color is produced.

Killer Killiani Test: Glycoside is dissolved in a mixture of 1% ferric sulfate solution in (5%) glacial acetic acid. Add one or two drops of concentrated sulphuric acid. A blue color develops due to the presence of deoxy sugar.

Xanthydrol Test: The crude is heated with 0.1 to 5% solution of xanthydrol in glacial acetic acid containing 1% hydrochloric acid. Red color is produced due to the presence of 2-deoxysugar.

Baljet Test: Take a piece of lamina or thick section of the leaf and add sodium picrate reagent. If glycoside is present yellow to orange color will be seen 20.

Pathophysiology: Digoxin's inotropic effect results from the inhibition of the sodium-potassium adenosine triphosphatase (Na+ /K+ATPase) pump. The subsequent rise in intracellular calcium (Ca++) and sodium (Na+) coupled with the loss of intracellular potassium (K+ ) increases the force of myocardial muscle contraction (contractility), resulting in a net positive inotropic effect. Digoxin also increases the automaticity of Purkinje fibers but slows conduction through the atrioventricular (AV) node. Cardiac dysrhythmias associated with an increase in automaticity and a decrease in conduction may result. The relationship between digoxin toxicity and the serum digoxin level is complex; clinical toxicity results from the interactions between digitalis, various electrolyte abnormalities, and their combined effect on the Na+ /K+ ATPase pump. Cardiac, such as oleander, foxglove, and lily-of-the-valley, is uncommon but potentially lethal. Case reports of toxicity from these sources implicate the preparation of extracts and teas as the usual culprit 21.

Cardiovascular Effects: Cardiac glycosides are often called digitalis or digitalis glycosides, in particular, digoxin and digitoxin, have been a cornerstone of the treatment of heart diseases for more than two centuries. However, the identification of angiotensin converting enzyme inhibitors, β-adrenergic blockers and angiotensin-receptor blockers has significantly reduced their clinical use. The cardiac glycosides are with low therapeutic index. They possessed many cardio-vascular effects by many mechanisms 25, 26, 27, 28.

Antitumor Activity: Recent research has shown the anticancer effects of digitalis compounds, suggesting their possible use in medical oncology D. purpurea were identified as having cytotoxic properties, including cytotoxic activity, and warrant further study. Another study was supportive of investigations showing that apoptosis induction is a major effect of digitalis on several types of tumor cells 9. The report demonstrated the anticancer activity of D. purpurea. L. heywoodi on 3 human cancer cell lines. The results of one study revealed marked differences in cytotoxicity between the cardiac glycosides 29.

Cytotoxic Effects: Extracts of plant examined for anticancer activity in 10 human tumor cell lines. They produced cytotoxic effects, but the activity profiles were uncorrelated with those of the standard drugs, possibly indicating new pathways of drug-mediated cell death 30.

Hepatoprotective Effects: 4 different glycosides (acteoside, purpureaside A, calceolarioside B, and plantain side D) isolated from the leaves of Digitalis purpurea were studied for their abilities to induce glutathione S-transferase (GST) and their protective efficiencies against aflatoxin B1-induced cytotoxicity in H4IIE cells. Of these four glycosides, acteoside significantly inhibited the cytotoxicity induced by aflatoxin B1 (AFB1) and also selectively increased GST alpha protein levels. Reporter gene analysis using an antioxidant response element (ARE) containing construct and subcellular fractionation assays, revealed that GST alpha induction by acteoside might be associated with Nrf2/ARE activation 32.

Adverse Effects and Toxicity: Digitalis is a toxic plant. At low serum drug concentrations, digitalis was well tolerated. However, it characterized by a very narrow therapeutic index, and digitalis toxicity was one of the most common adverse drug reactions leading to hospitalization. Anorexia, nausea, and vomiting may be initial indicators of toxicity. Patients may also experience blurred vision, yellowish vision (xanthopsia), and various cardiac arrhythmias. Diarrhea may be noted, as may abdominal discomfort or pain, headache, malaise, and drowsiness were common symptoms, neuralgic pain may be the earliest most severe, it may occur with confusion, disorientation, aphasia and mental clouding.

Toxicity can often be managed by discontinuing digitalis, determining serum potassium levels, and, if indicated, replenishing potassium. The main toxins in Digitalis are the two chemically similar cardiac glycosides: digitoxin and digoxin. Like other cardiac glycosides, these toxins exert their effects by inhibiting the ATPase activity of a complex of transmembrane proteins that form the sodium-potassium ATPase pump, (Na+/K+-ATPase). Inhibition of the Na+/K+-ATPase, in turn, causes a rise not only in intracellular Na+ but also in calcium, which in turn results in increased force of myocardial muscle contractions. In other words, at precisely the right dosage, Digitalis toxin can cause the heart to beat more strongly. However, digitoxin, digoxin and several other cardiac glycosides, such as ouabain, are known to have steep dose-response curves, i.e., minute increases in the dosage of these drugs can make the difference between an ineffective dose and a fatal one.

Symptoms of Digitalis poisoning include a low pulse rate, nausea, vomiting, and uncoordinated contractions of different parts of the heart, leading to cardiac arrest and finally death 25, 36.