ABSTRACT: Alzheimer’s syndrome/disease is known for its progressive Neuro-degenerative illness and considered pathologically by the deposition of β-amyloid peptide and senile plaques (a pathological accumulation of paired helical filament composed of abnormally formed tau protein in the hippocampus of our brain). This serves to maintain the memory deterioration. Along with that, the treatment and prevention of synthetic drugs having a long list of adverse effects. Alzheimer’s syndrome induced through aluminium trichloride (4.2 mg/kg intraperitonial) continues for 28 days. The albino Wistar rats were divided into 5 groups (n=6 in each group) then weighed for 28 days of induction of disease. Extract of dried leaves of Camellia sinensis. (200 mg/kg and 400 mg/kg) along with standard drug (Donepezil 2 mg/kg) by oral route given through (1% CMC suspension) after treatment showed a significantly decreased escape latency. Previous studies for Camellia sinensis showed that it is efficient in the prevention of deposition of senile plaques. Along with neurofibrillary tangles in the hippocampus with deficits in enhanced memory results.

INTRODUCTION: Alzheimer’s disease, a neurodegenerative disorder that is characterized by progressive deterioration of cognitive abilities, eventually leading to death. It primarily affects the elderly population and is considered to be responsible for the majority of dementia cases in people aged more than 65 y. Histopathologically AD has been characterized by the extracellular deposits of amyloid β (Aβ) protein in senile plaques in the brain parenchyma and cerebral blood vessels and neurofibrillary tangles of abnormally hyper-phosphorylated tau filaments in the neocortex, especially the hippocampus 1, 2.

The deposition of tau corresponds to their filaments they deposited intracellularly in the neurons, which are called neurofibrillary tangles. However, the pathology of AD is complex, and three main pathogenic pathways are believed to contribute to the progression of the disease; cholinergic deficit, senile plaque/amyloid-β peptide deposition, and oxidative stress 3.

One of the natural compounds that are popular in the world for their therapeutic importance is the leaves of Camellia sinensis. Camellia sinensis having polyphenols and having structures such as flavonoids; these compounds are known for their active phytochemicals, which are the important properties of Camellia sinensis. However, the important compound in it is epigallocatechin 3-gallate (EGCG), which inhibits the aggregation of senile plaque in the hippocampus in the brain and helps to improve memory deficits. Also, EGCG may protect against β- amyloid-induced neuro-toxicity in cultured hippocampal neurons, an effect attributed to its antioxidant properties 4. And precursor results showed a reduction of αβ and β- amyloid plaque in the brain of a rat model of Alzheimer’s disease induced by AlCl3.

MATERIALS AND METHODS: Camellia sinensis leaves were procured in the month of August to September 2017 from the local region of Bhopal district of Madhya Pradesh. The botanical identity was confirmed by the Department of botany, Safia College of Science Bhopal, Madhya Pradesh.

Extraction: 250 gm dried powder plant material was taken and extracted with solvent ethanol by Soxhlet extraction method at temp 40 to 50 ºC. After complete extraction, the extract was properly dried on the water bath and stored in an airtight container for further analysis. The yield of Camellia sinensis ethanolic extract was found to be 17.86% w/w.

Experimental Animals: Albino Wistar rats and pale Swiss mice of both sexes were arbitrarily chosen from a uniform weight of 200 ± 25 gm and 25 ± 5 gm, respectively, were used for this activity. The animals were housed in polypropylene cages at 25 ± 1 °C with a relative humidity of 55 ± 5% under 12/12 h light/dark cycles.

They received standard food and water during experimentation. A minimum of six animals was used in each group. Procedures involving animals and their care were conducted in accordance with the “Guide to the care and use of experimental animals” 5. The study protocol was approved by the Institutional Animal Ethics Committee, according to the regulation of the Committee for the Purpose of Control and Supervision of Experiments on Animals.

Acute Oral Toxicity: The OECD Chemical Testing Guidelines are reviewed periodically in the light of scientific progress or changing assessment practices. The original 423 guides were adopted in March 1996 as a second alternative to the conventional acute toxicity test, described in the 401 test guide. The measurement level to be used as a basic dose is chosen from among the four established levels 5, 50, 300, and 2000 mg/kg of body weight 6.

Induction of Alzheimer's Disease: The animals (rats) were induced with Alzheimer's disease using AlCl3 in a dose of 4.2 mg/kg, i.e. daily for 28 days. On day 11, 30 min after the administration of AlCl3, the test drug (200mg/kg and 400mg/kg extract) and the standard drug (Donepezil 2 mg/kg) were administered orally by suspension in 1% carboxy methylcellulose. After 1 hour of test drug administration, experiments are performed.

Experimental Design: The animals were randomly divided into five groups (n = 6 in each group) and weighed. During an experimental period of 28 days, 10 days of disease induction and 18 days of therapy:

Stumbling Board Model for Locomotor Activity: The stumbling board model is the model in which locomotive behaviour of rats in a novel environment was calculated. This model is used for measuring the response of the mice to an unknown and unfamiliar environment. The stumbling board model apparatus consisted of a grey wooden box (50 × 50 cm) with 36 equidistant holes 3 cm in diameter in the floor. Hind paw dipping behaviours were checked for 5 min with sample interval of 5 min.

Elevated Plus Maze Model for Learning and Memory: In the elevated plus-maze model used for measuring learning and memory skills, rat were given two trails were placed individually at the end of one arm facing away from the center of the maze and the time the rat took to move from open arm to either of the enclosed arms called transfer latency was recorded. After the first trial on the first day, the rats were returned to their home cages. The rats were placed in the elevated plus-maze individually as before and Transfer latency was re-recorded twenty-four hours later. On the 1st and 2nd-day transfer, latency was measured and served as parameters for acquisition and retrieval, respectively. 30 min for the first trial, all the drugs were administered.

All values are mean[n] ± SD, n═3 and SD ═ standard deviation

Foreign matter is the material made up of any organ other than those indicated in the identification and description, subjects that do not come from the source of the plant, from mold, from insects or other animal contamination. The results showed that the content of foreign substances is 1.8 ± 0.14, present in the drugs 7. The moisture content was used to determine the presence of volatile substances [i.e. the water that is dried by the drug]. The moisture content is 3.3 ± 0.13, maximum moisture content 8.

The total value of the ashes shows the presence of inorganic substances in the drug. Total ash [0.4 ± 0.05], ash insoluble ash [0.2 ± 0.04] and water-soluble ash [0.05 ± 0.04] were found in medicinal products. The value of the ashes of a drug gives an idea of the earthy matter or of the inorganic composition and of other impurities present along with the drug 7. The foaming index was found in less than 100 in camellia sinensis, indicating the absence of saponins. No swelling of 4.60 ± 0.05 was detected. He showed that polar constituents are present in greater quantities than non-polar constituents in drugs. The extracted value is used to indicate the miscibility and the presence of the constituent solvents; it is carried out in solvents such as alcohol and water, thus indicating the presence of several polar compounds during the shift on the polarity scale.

The present study reveals that plant shows the presence of phytochemical constituents like phenolic compounds, flavonoids, alkaloids, and terpenoids; glycosides and saponins are absent in plant extract.

Values are expressed as MEAN±SD at n=6, One-way Anova followed by Bonferroni test, *P<0.001 significant and NSP<0.001 non-significant compared to the AlCl3 group 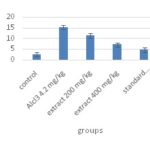 The Stumbling board model used for measuring the locomotors activity of animals. The locomotors behaviour of animals in a novel environment was measured as previously using a stumbling board. This method is used for measuring the response of the animal to an unfamiliar environment. No. of dip the paw in the hole was calculated after the administration of the extract at the dose of 200 mg/kg, which was found to be 11.33±1.366* which showed significant reduction when compared to the test at the time of induction of Alzheimer’s disease. The no. of dip the paw in the hole further reduced to 7.16±1.602* upon increasing the dose to 400 mg/kg, indicating a substantial improvement in the locomotion thus proving that the extract has anti-Alzheimer’s activity and upon increasing the dose the activity further improves.

Values are expressed as MEAN±SD at n=6, One-way Anova followed by Bonferroni test, *P<0.001 significant and NSP<0.001 non-significant compared to the AlCl3 group 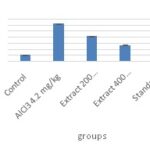 The transfer latency was calculated after administering the extract at the dose of 200 mg/kg, which was found to be 41.83 ± 6.400*, which showed a significant reduction compared to the test at the time of induction of Alzheimer’s disease. The transfer latency further reduced to 27.33 ± 3.669* upon increasing the dose to 400 mg/kg, indicating a substantial improvement in the memory, thus proving that the extract had anti-Alzheimer’s activity, and upon increasing the dose, the activity further improves.

CONCLUSION: The main result of this study is that treatment with EGCG can avoid spatial memory deficits in a model of AD in rats by inhibiting amyloid plaque formation. Therefore, drinking tea every day could be an effective habit to prevent the onset of Alzheimer's disease and to improve memory deficits in the early stages of the disease.

CONFLICTS OF INTEREST: Conflict of interest declared none.