DETERMINATION OF MEXILETINE IN PHARMACEUTICAL PREPARATIONS BY LINEAR SWEEP VOLTAMMETRY

DETERMINATION OF MEXILETINE IN PHARMACEUTICAL PREPARATIONS BY LINEAR SWEEP VOLTAMMETRY

ABSTRACT: A simple and rapid method for the determination of mexiletine in pharmaceutical preparations was developed and validated using linear sweep voltammetry (LSV). The proposed method was based on electrochemical oxidation of mexiletine at a platinum electrode in an acetonitrile solution containing 0.1M LiCIO4. The well-defined an oxidation peak was observed at +1.11 V. The calibration curve was linear for mexiletine at the concentration range of 5-70 µg/mL for LSV method. Intra- and inter-day precision values for mexiletine were less than 2.73, and accuracy (relative error) was better than 3.89%. The mean recovery of mexiletine was 100.1% for a pharmaceutical preparation. No interference was found excipient at the selected assay conditions. The method was found to be specific, precise and accurate. The method was applied for the quality control of commercial mexiletine capsule form to quantify the drug and to check the formulation content uniformity.

INTRODUCTION: Arrhythmias, commonly observed as atrial fibrillation, atrial flutter, atrial tachycardia, ventricular tachycardia, and premature beats, are the consequences of abnormal autorhythmicity or conduction disturbance of heart. Generally, antiarrhythmic drugs therapy is preferred for patients with cardiac arrhythmia 1, 2, 3. Mexiletine Fig. 1, is an antiarrhythmic agent used in the treatment of ventricular arrhythmia 4. It is available in the form of the hydrochloride salt, a single dose ranges from 50-400 mg, and a daily dose up to 1500 mg can be prescribed. The bioavailability of mexiletine is 80-90% by the oral route. Peak plasma concentration occurs in 1-4 h after ingestion 5.

Several methods have been reported for determination of mexiletine including High-Performance Liquid Chromatography (HPLC) 6-14, LC-MS/MS 15 and Gas Chromatography-Mass Spectrophotometry (GC-MS) 16-18 in plasma and other biological fluids.  The USP XXII 19 describes a reverse phase HPLC method for its assay while the BP 93 20 describes a nonaqueous titration method.

The reported methods were influenced by the interference of endogenous substances and potential loss of drugs in the re-extraction procedure and involving lengthy, tedious and time-consuming plasma sample preparation and extraction processes and requiring sophisticated and expensive instrumentation. The development of a new method capable of determining drug amount in pharmaceutical dosage forms is important. Electroanalytical techniques have been used for the determination of a wide range of drug compounds with the advantages that there are, in most, instances no need for derivatization and that these techniques are less sensitive to matrix effects than other analytical techniques. Additionally, the application of electrochemistry includes the determination of electrode mechanism. Redox properties of drugs can give insights into their metabolic fate or their in-vivo redox processes or pharmacological activity 21-24.

Therefore, the goal of this work was the development of a new LSV method for the direct determination of mexiletine in pharmaceutical preparation without any time-consuming extraction or evaporation steps before drug assay. This paper describes fully validated simple, rapid, selective and sensitive procedures for the determination of mexiletine employing LSV methods the platinum disc electrode. Besides, the method was successfully applied for the quality control of commercial mexiletine quantify the drug and to check the formulation content uniformity.

Chemicals and Reagents: Mexiletine HCl (99.6% purity) was obtained by Eczacıbaşı Pharmaceutical Industry (Istanbul, Turkey). Acetonitrile (Fluka for HPLC analysis) was purified by drying with calcium hydride, followed by distillation from phosphorus pentoxide. After purification in order to eliminate its water content as much as possible, it was kept over molecular sieves. Lithium perchlorate (LiClO4) were purchased from Fluka and used as received without further purification. Mexitil capsule containing 200 mg mexiletine was obtained by the pharmacy (Erzurum, Turkey).

Electro - chemical Instrumentation: Electro-chemical experiments were performed on a Gamry Potentiostat Interface 1000 controlled with software PHE 200 and PV 220. All measurements were carried out in a single-compartment electro-chemical cell with a standard three-electrode arrangement. A platinum disk with an area of 0.72 cm2 and a platinum wire were used as the working and the counter electrodes, respectively. The working electrode was successively polished with 1.0, 0.3 and 0.05 µm alumina slurries (Buehler) on micro cloth pads (Buehler).

After each polishing, the electrode was washed with water and sonicated for 10 min in acetonitrile. Then, it was immersed in a hot piranha solution (3:1, H2SO4, 30% H2O2) for 10 min, and rinsed copiously with water. All potentials were reported versus Ag/AgCl/KCl (3.0 M) reference electrode (BAS Model MF-2078) at room temperature. The electrolyte solutions were degassed with purified nitrogen for 10 min before each experiment and bubbled with nitrogen during the experiment.

Procedure for Pharmaceutical Preparations: Accurately weighed the amount of powder for injection equivalent to 10 mg of mexiletine was transferred into 100 ml calibrated flask and 50 ml of 0.1 M LiClO4/acetonitrile was added, and then the flask was sonicated to 10 min at room temperature. The flask was filled to volume with 0.1 M LiClO4/acetonitrile. The resulting solutions in both the cases were filtered through Whatman filter paper no 42 and suitably diluted to get final concentration within the limits of linearity for the respective proposed method. The drug content of mexiletine was calculated from the current potential curve.

Voltammetric Behavior of Mexiletine: The electrochemical reaction of mexiletine was investigated at the Pt disc electrode in an acetonitrile solution containing 0.1 M LiClO4 as the supporting electrolyte by using cyclic voltammetry (CV). Fig. 2 shows a typical cyclic voltammogram of 30 μg/mL mexiletine recorded under these conditions for the scan rate of 0.1 V/s. In the anodic sweep, an oxidation peak is seen at about potential of +1.11 V.

To gain a deeper insight into the voltammetric waves, the effect of scan rate on the anodic peak currents (Im) and peak potentials (Ep) was studied in the range of 0.01-1 V/s of the potential scan rates in an acetonitrile solution containing 30 μg/mL concentration of mexiletine. 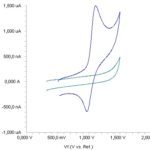 The representative linear sweep voltammograms obtained at the Pt electrode for 30 μg/mL mexiletine as a function of the scan rate. However, the plots of logarithm of peak currents versus the logarithm of scan rates for 30 μg/mL concentration of mexiletine display straight lines with 0.48 slope, which are close to the theoretical value of 0.5 expected for an ideal diffusion-controlled electrode process 25. log Im-log ν curve is more eligible for this aim; therefore, a diffusional process for peak should be considered. These results suggest that the redox species are diffusing freely from solution and not precipitating onto the electrode surface. The reason for this behavior may be due to the solubility of the intermediate species in acetonitrile or poor adherence of products on the electrode surface.The oxidation peak potential (Epa) for peaks shift toward more positive values with increasing scan rate. The relationship between the peak potential and scan rate is described by the following equation 26,

And from the variation of peak potential with scan rate αna can be determined, where α is the transfer coefficient and na is the number of electrons transferred in the rate determining step. The slope indicates the value of αna is 1.0 for the peak. Also, this value obtained indicate the total irreversibility of the electron transfer processes. This result shows that the chemical step is a following fast reaction coupled to a charge transfer.

Validation of the Method: The validation was carried out by establishing specificity, linearity, accuracy, precision, limit of detection (LOD), limit of quantification (LOQ), stability, recovery according to ICH Q2B recommendations 27, 28.

Specificity: The effects of common excipients and additives were tested for their possible interferences in the assay of mexiletine. The simulated and placebo samples were prepared and analyzed. It has not been determined any interference of these substances at the levels found in dosage forms. Excipient that was used in this preparation was the most commonly used by the pharmaceutical industry. The specificity of the method was investigated by observing any interference encountered from the common tablet excipients such as titanium dioxide, sodium chloride, talc, lactose, starch, and magnesium stearate. These excipients did not interfere with the proposed method. 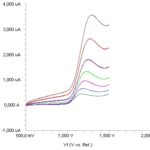 Accuracy and Precision: The accuracy of the assay methods was determined for both intra-day and inter-day variations using the quality control (QC) samples. The precision of the assay was determined by repeatability (intra-day) and intermediate precision (inter-day). Repeatability refers to the use of the analytical procedure within a laboratory over a short period that was evaluated by assaying the QC samples during the same day. Intermediate precision was assessed by comparing the assays on different days (2 days). The intra-day accuracy ranged from 3.51% to 0.64% and precision from 2.73% to 2.04% Table 2. The results obtained from intermediate precision (inter-day) also indicated a good method of precision.

TABLE 2: PRECISION AND ACCURACY OF MEXILETINE

Stability: To evaluate the stability of mexiletine, standard solutions were prepared separately at concentrations covering the low, medium and higher ranges of a calibration curve for different temperature and times. These solutions were stored at room temperature, refrigeratory (4°C) and frozen (-20°C) temperature for 24 h and 72 h. Stability measurements were carried out with LSV method. The results were evaluated comparing these measurements with those of standards and expressed as percentage deviation, and mexiletine was found as stable at room temperature, 4 and -20 °C for at least 72h Table 3.

Recovery: To determine the accuracy of the LSV method and to study the interference of formulation additives, the recovery was checked as three different concentration levels. Analytical recovery experiments were performed by adding known amount of pure drugs to pre-analyzed samples of commercial drug form. The recovery values were calculated by comparing concentration obtained from the spiked samples with actually added concentrations. These values are also listed in Table 4.

TABLE 3: STABILITY OF MEXILETINE IN SOLUTION

The proposed method is very effective for the assay of mexiletine in capsules. The validity of the proposed method was presented by recovery studies using the standard addition method. For this purpose, a known amount of reference drug was spiked to formulated capsules, and the proposed methods estimated the nominal value of drug. Each level was repeated six times. The results were reproducible with low SD and RSD. No interference from the common excipients was observed. The proposed method was applied to commercially available capsules. The results were compared with those obtained by USP XXIII 19 and BP 1993 20 official methods. Statistical comparisons in terms of F-test for these methods were given in Table 5. There are no significant differences between the proposed methods and the official methods concerning the mean values and standard deviations at a 95% confidence level.

TABLE 5: COMPARISON OF THE PROPOSED AND OFFICIAL METHODS

CONCLUSION: In the present study, the electrochemical behavior of mexiletine has been studied in nonaqueous media by CV method. Besides, a simple, rapid, sensitive, reliable, specific, accurate and precise LSV method for the determination of mexiletine in pharmaceutical preparation was developed and validated. The method described has been effectively and efficiently used to analyze mexiletine pharma-ceutical preparations without any interference from the pharmaceutical excipients. The voltammetric run time of 1 min allows the analysis of a large number of samples in a short period. Therefore, the method can be used effectively without separation for routine analysis of mexiletine in pure form and its formulations.