ABSTRACT: In traditional medicinal trees, Dalbergia sissoo is a popular species around the world.  It has been used for the therapeutic purpose from thousands of years, and now there is a growing demand for plant-based medicines, health products, pharmaceuticals, and cosmetics. Dalbergia sissoo is a widely growing plant which is used traditionally as anti-inflammatory, antipyretic, analgesic, anti-oxidant, anti-diabetic and as an antimicrobial agent. Several chemical constituents have been isolated and identified from different parts of the plant belonging to the category of alkaloids, glycosides, flavanols, tannins, saponins, sterols and terpenoids. Compounds isolated from Dalbergia sissoo like an isoflavone, biochanin is a potent chemotherapeutic cancer preventive agent with a distinct estrogenic activity. D. sissoo possesses several pharmacological activities; however, it is essential that more clinical and pharmacological studies should be conducted to investigate the unexploited potential of this plant. A review of plant description, phytochemical constituents present, traditional uses and pharmacological activities of Dalbergia sissoo are given in the present article.

INTRODUCTION: Dalbergia sissoo, commonly known as Indian Rosewood, is a deciduous tree, also known as sisu, Sheesham, tahli and Tali. It is native to the Indian Subcontinent and Southern Iran. Dalbergia sissoo is the state tree of Punjab state (India) and the provincial tree of Punjab province (Pakistan). It is found growing along river banks below 900 meters (3,000 ft) elevation but can range naturally up to 1,300 m (4,300 ft).

It can withstand average annual rainfall up to 2,000 millimeters (79 in) and droughts of 3-4 months. It prefers soils from pure sand and gravel to rich alluvium of river banks. Shisham can grow in slightly saline soils. Seedlings are intolerant of shade 1.

Botanical Description: Dalbergia sissoo is a medium to large size deciduous tree. It is of about 25 meters high with grey-yellow trunk, longitudinal crack, and downcast twig. Leaves are leathery, pinnately compound, alternate leaflets, petiolated leaf stalk, measures about 15 cm long, each leaflet most comprehensive at the base, to 6 cm long with a fine pointed tip. Flowers are whitish to pink, fragrant, nearly sessile, and in dense clusters. Pods are oblong, flat, thin, strap-like 4–8 cm long, 1 cm wide and light brown Fig. 1 and 2. They contain 1–5 flat bean-shaped seeds 8–10 mm long.  It has a long taproot and numerous surface roots which produce suckers. Young shoots are downy and drooping; stems have light brown to dark grey bark up to 2.5 cm (0.98 in) thick, shed in narrow strips, large upper branches support a spreading crown Fig. 1 and 2 1. 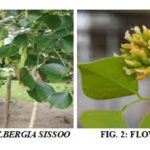 Leaf extract has been used to treat sore throats, heart problems, dysentery, syphilis, and gonorrhea. In India and Nepal, rural people use Dalbergia sissoo leaves to treat animals suffering from non-specific diarrhea. People use twigs of the tree to clean their teeth 7.

Anti-Termite Activity: The anti-termite activity of heartwood of Dalbergia sissoo was evaluated. It was concluded that the plant extracts could be used as an alternative for synthetic pesticides for the control of termite in buildings 9.

Anti-Diabetic Potential: Pankaj Singh Niranjan et al., conducted a study in 2010 to evaluate the anti-diabetic activity of ethanolic extract of Dalbergia sissoo leaves in alloxan-induced diabetic rats. They concluded that the ethanolic extract of the leaves is 12% more effective in reducing the blood glucose level compared to standard Glibenclamide 10.

Antimicrobial Property: In a study, a herbal preparation containing Dalbergia sissoo and Datura stramonium was evaluated for its antibacterial potential against pathogenic strains of gram-positive (Staphylococcus aureus and Streptococcus pneumoniae) and gram-negative (Escherichia coli, Pseudomonas aeruginosa, and Klebsiella pneumonia) bacteria. Antibacterial effect was compared to standard antibiotic drugs, i.e. Chloramphenicol (30 mcg), Ampicillin (10 mcg), Nalidixic acid (10 mcg) and Rifampicin (30 mcg). An extract was found to be most active against both gram-positive as well as gram-negative bacteria. A clinical isolate of S. aureus showed higher sensitivity towards both extract than standard strains and inhibited growth on most administrative levels such as inhibition of protein, DNA, RNA, and peptidoglycan synthesis. The results of the study show that the extract of Dalbergia sissoo and Datura stramonium may be used as a potent antiseptic preparation for the prevention and treatment of chronic bacterial infections 14.

Osteogenic Activity: One new isoflavone glucoside, caviunin 7-O-[β-D- apiofuranosyl-(1→6)-β-D-glucopyranoside] and a new itaconic derivative, (E)- 4-methoxy- 2- (3,4-dihydroxy benzylidene)-4-oxobutanoic acid  along with series of isoflavones and flavonols with their glucosides, and a lignan glucoside was isolated from the ethanolic extract of Dalbergia sissoo leaves and were assessed for osteogenic activity in primary calvarial osteoblast cultures. The result showed that compounds exhibited significant osteogenic activity 16.

CONCLUSION: In recent years, medicinal plant studies have received much attention as this brings to light the numerous little known and unknown medicinal virtues especially of plant origin which needs evaluation on modern scientific lines such as phytochemical analysis, pharmacological screening and clinical trials.

Dalbergia sissoo possesses a variety of pharmacological activities as discussed in the present review article. However, it is essential that more clinical and pharmacological studies should be conducted to investigate the unexploited potential of this plant.

ACKNOWLEDGEMENT: All authors have contributed significantly, and that all authors agree with the content of the manuscript.