INTRODUCTION: Plants are one of the most important sources of medicines. Today a large number of drugs in use is derived from plants. The uses of medicinal plants as traditional medicines are well known in rural areas of Bangladesh. Our present study was designed to determine the cytotoxic activity of different fractions (petroleum ether, ethyl acetate & chloroform) of the rhizome of Alpinia nigra.  Alpinia nigra is a perennial rhizomatous herb with tuberous, aromatic roots. Leaves are sessile, oblong,-lanceolate, acuminate, cuspidate, glabrate, striate and compressed.

Fruits are black, thin, globose and irregularly rupturing. Seeds are many, small, black and angular 1. In Alpinia nigra, flowers are pink 2. An anti-microbial diterpene has been isolated from the rhizome 3. The rhizomes are bitter, acrid, thermogenic, aromatic, nervine tonic, stimulant, revulsive, carminative, stomachic, disinfectant, aphrodisiac, expectorant, broncho-dilator, anti-fungal, febrifuge, anti-inflammatory and tonic 4. Rhizome is CVS and CNS active, diuretic, hypothermic. Seed is anti-ulcerative 5. Alcohol (50%) extract of the rhizome is anti-amphetaminic. Unani physicians consider it good for impotence 6. The volatile steam oil stimulates bronchial glands when exposed to its vapors 7. The rhizomes of Alpinia nigra are anti-inflammatory 8.

The pharmacognosy and toxicology of anti-carcinogenic natural products from galanga root oil have been studied by Zheng 9. It has been found that oral administration of ethanolic extract of the rhizome produced a hypolipidemic effect by reducing serum and tissue levels of total cholesterol, triglycerides and phospholipid in Wister rats 10.

Drying and Pulverization: The fresh rhizomes of the plants were first washed with water to remove adhering dirt and then cut into small pieces, sun-dried for 4 days and finally dried at 45 ºC for 36 h in an electric oven. After complete drying, the entire portions were pulverized into a coarse powder with the help of a grinding machine and were stored in an airtight container for further use.

Cold Extraction of Plant Material: The fresh rhizome of Alpinia nigra was collected, dried and ground to a coarse powder. The powder sample (500 gm) was subjected to cold extraction with methanol for about 30 days. The methanol extract was then subjected to the modified Kupchan partitioning method with pet ether, ethyl acetate, and chloroform. Thus, three extractives were obtained, leaving the aqueous fraction.

Preparation of Mother Solution: 5 gm of methanol extract of Alpinia nigra was triturated with 90 ml of methanol containing 10 ml of distilled water. The crude extract went to the solution completely. This is the mother solution, which was partitioned off successively by three solvents of different polarity.

Partitioning with Pet Ether: The concentrated methanol extract was made the slurry with water. The crude extract is diluted with sufficient amount of aqueous methanol (90%) and then gently shaken in a separating funnel with 100ml of a suitable organic solvent (such as pet ether) which is immiscible with aqueous methanol. The mixture is kept undisturbed for several minutes for separation of the organic layer from the aqueous phase. The materials of the crude extract will be partitioned between the two phases depending on their affinity for the respective solvents. The organic layer is separated, and this process is carried out thrice for maximum extraction of the samples. The pet ether layer (upper layer) was collected. The process was repeated three times. The combined pet ether extract was concentrated. After separating off the organic phase, the aqueous phase thus obtained is successively extracted with other organic solvents, usually of the increasing polarity (such as ethyl acetate, chloroform, etc.). Finally, all the fractions (organic phases as well as the aqueous phase) are collected separately and evaporated to dryness. These fractions are used for isolation of compounds.

Partitioning with Ethyl Acetate: After pet ether extraction, 10 ml of distilled water was added and mixed. Then ethyl acetate (100 ml) was added to the mother solution, and the mass was shaken vigorously in a separating funnel. Then the funnel was allowed to stand for a few minutes for the complete separation of the layers. The ethyl acetate (organic lower layer) fractions were collected together and evaporated. The process was repeated two times. The aqueous fraction was preserved for the next step.

Partitioning with Chloroform: After ethyl acetate extraction, 16 ml of distilled water was added and mixed uniformly. Then, chloroform (100 ml) was added to the mother solution, and the mass was shaken vigorously in a separating funnel. Then the funnel was allowed to stand for a few minutes for the complete separation of the layers. The chloroform (organic lower layer) fractions were collected together and evaporated. The process was repeated three times. The aqueous methanolic fraction was preserved as an aqueous fraction.

Cytotoxicity Test: Pharmacology is simply toxicology at a lower dose, and toxicology is simply pharmacology at a higher dose. Bioactive compounds are almost always toxic in high doses. The in-vivo lethality in a simple zoologic organism can be used as a convenient monitor for screening and fractionation in the discovery and monitoring of bioactive natural products. It focused on Artemia salina as a test organism and developed a protocol for Brine shrimp lethality bioassay to monitor cytotoxicity of a compound.

Principle: Brine shrimp eggs are hatched in stimulated sea water to get nauplii. Test samples are prepared by dissolving in DMSO and by addition of the calculated amount of DMSO, the desired concentration of the test sample is prepared. Ten nauplii are counted by visual inspection and are taken in vials containing 5 ml of simulated sea water. Then samples of different concentration are added to the premarked vials through a micropipette. The vials are then left for 24 h, and then the nauplii are counted again to find out the cytotoxicity of the test agents. These data are processed in a simple program to estimate LD50 values with 95% confidence intervals for statistically significant comparisons of potencies.

Preparation of Seawater: 38 gm sea salt (pure NaCl) was weighed, dissolved in one liter of distilled water and filtered off to get a clear solution.

Hatching of Brine Shrimps: Artemia salina leach (brine shrimp eggs) collected from pet shops was used as the test organism. Seawater was taken in the small tank, and shrimp eggs were added to one side of the tank, and then this side was covered. Two days were allowed to hatch the shrimp and to be matured as nauplii. Constant oxygen supply was provided throughout the hatching time. The hatched shrimps were attracted to the lamp through the perforated dam and with the help of a Pasteur pipette 10 living shrimps were added to each of the vials containing 5 ml of seawater.

Preparation of the Negative Control Group: 100 ml of DMSO was added to each of three premarked glass vials containing 5 ml of simulated seawater and 10 shrimp nauplii to use as control groups. If the brine shrimps in these vials show a rapid mortality rate, then the test is considered as invalid as the nauplii died due to some reason other than the cytotoxicity of the compounds.

Counting of Nauplii: After 24 h, the vials were inspected using a magnifying glass, and the number of survived nauplii in each vial was counted. From this data, the percent (%) of lethality of the brine shrimp nauplii was calculated for each concentration.

Result and Discussion of Brine Shrimp Lethality Bioassay: Bioactive compounds are almost always toxic at a higher dose. Thus, in-vivo lethality in a simple zoological organism can be used as a convenient informant for screening and fractionation in the discovery of new bioactive natural products. In the present bioactivity study all the crude extracts, VLC fractions and pure compounds showed positive results indicating that the test samples are biologically active. Each of the test samples showed different mortality rates at different concentrations.

RESULT AND DISCUSSION: The brine shrimp test (BST) represents a rapid, inexpensive and simple bioassay for testing plant extract lethality which in most cases correlates reasonably well with cytotoxic and anti-tumor properties. Following the procedure of the lethality of the pet ether, ethyl acetate and chloroform fractions were determined, and the summary of the result is expressed in Table 2.

TABLE 2: RESULTS OF THE TEST SAMPLES OF ALPINIA NIGRA

The LC50 values of pet ether, ethyl acetate and chloroform fraction found to be 1.245 mg/ml, 2.151 and 2.737 µg/ml respectively Table 3. The positive control vincristine sulphate showed LC50 at a concentration of 0.501 µg/ml.

From the results of the brine shrimp lethality bioassay, it can be well predicted that the pet ether, ethyl acetate, and chloroform fractions possess cytotoxic principles. The chloroform extract was found to be considerable cytotoxic activity.

Chloroform fraction showed the highest potency (LC50 2.737 µg/ml) among all the fractions.

Comparison with positive control vincristine signifies that cytotoxicity exhibited by the chloroform fraction and pet ether fraction might have mild antitumor and pesticidal activity. However, this cannot be confirmed without further higher and specific tests. 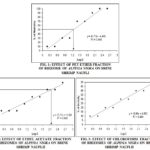