ABSTRACT: Salacia chinensisis, commonly known as Saptarangi in the Hindi family of Hippocrateaceae, it is a woody climbing shrub found in Africa, Vietnam, and Thailand. A large number of biologically active compounds like salacinol, kotalanol, neokotalanol, neosalacinol, salasol, and mangiferin are isolated from S. chinensis. Traditionally, the plant is used in the treatment of diabetes, but there are few studies that demonstrate its use as anti-inflammatory, nephroprotective, anticancer, and treatment of cardiac disorders. The present study involves extraction, isolation, structural elucidation, and prediction of antioxidant activity from the roots of S. chinensis. The roots were extracted with water and methanol by using a hot extraction method. The methanol extract was fractionated with ethyl acetate. The antioxidant activity of different extracts was determined by 1, 1-diphenyl-2- picryl- hydrazyl (DPPH) method. The highest antioxidant activity was found in ethyl acetate extract, followed by methanol extract and water extract. Ethyl acetate extract showed maximum antioxidant activity, so the extract was used for the isolation of antioxidant compounds by column chromatography. The compound was isolated from the Salacia chinensis with higher yield and new technique. The compound isolated was characterized as 25, 26-oxido friedelane 1, 3-dione, and was elucidated using 1H NMR, 13C NMR, and MS. The study shows that the obtained pure compound could be a good source of natural antioxidants.

INTRODUCTION: Large numbers of bioactive compounds are produced by plants that are used as an herbal medicine for the treatment of diseases since ancient times. Various phytochemicals, namely polyphenols, flavonoids, terpenes, phenolic acids, tannins, and coumarins, are present in plant and high concentrations of these phytochemicals may protect against free radical damage 1, 2.

The plants consist of beneficial phytochemicals, which is a need of the human body, and these phytochemicals act as natural antioxidants and source of supplementation for human diseases 3, 4. Antioxidants are considered a crucial chemical component, which may be responsible for preventing and delaying various types of cell damage.

The presence of antioxidants enhances the action of the immune system by producing a free radicle that is considered as one of the essential roles 5. It was observed that flavonoids and phenols are considered as strong antioxidants, and these are found to be distributed amongst various parts of plants.

The main aim of this study was to screen plant material extracts of finish origin with respect to antioxidant activity in order to find new potential sources of natural antioxidants. Different methods are used to evaluate the in-vitro antioxidant capacity of isolated compounds as well as those compounds containing different mixtures, which includes different mechanisms for the determination of antioxidant capacity of plant extract 2, 6. Salacia chinensis is an essential genus consisting of nutritional, medicinal, and pharmaceutical values belonging to the family of Hippocrateaceae. It is widely distributed across India, Sri Lanka, China, Myanmar, Thailand, Vietnam, and other Asian countries. Twenty-one species are found in India alone 7.

In India, S Chinensis is abundantly found in Karnataka, Goa, and Maharashtra. It is also called as, Saptarangi, Dimal, Modhupal, Ingli, Cherukuranti, Nisul-bondi and Eka Nayaka in Kannada. It is spread throughout the coast of the Andaman and Nicobar Islands and is a small erect or straggling tree or large, woody, climbing shrub 8. The S. chinensis tree can grow up to 3-10 m in height and 16 cm in diameter in the tropical forests 9. The species of S. Chinensis have medicinal value with high pharmacological significance. In the traditional system, it is used as acrid, bitter, thermogenic, urinary, and as a liver tonic. Extensive use has been reported in Ayurvedic system of medicine, traditional Indian medicine, and Unani for treating diabetes, gonorrhea, rheumatism, itching, asthma, ear diseases, leukemia, and inflammations 10.

Pharmacologically they are used in diseased conditions like respiratory disorder, chronic fever, cold, cough, malaria, dysentery, diarrhea, arthritis, skin diseases, convulsions, diabetes, trauma, and in treatment of internal organs, hepatic, vessel and immunologic disorders, Liver tonic and back pain 11. Salacia chinensis possess phytoconstituents like alkaloids, glycosides, polyphenols, coumarins, proteins, carbohydrates, gums and mucilage, fixed oil and volatile oil. The principle constituent like salacinol, kotalanol, salaprinol and ponkoranol, mangiferin is present in roots and stems and have been shown to be vital intestinal α-glucosidase inhibitors, and it lowers the absorption of carbo-hydrates in gastrointestinal tract and ultimately aims in delaying a rise in blood sugar by playing an essential role as anti-diabetic drug 12. Phyto-constituents are divided according to different parts of plant, phenolic glycosides, foliachineno-sides A1, A2, A3, B1, B2, C, and D are found to be present in leaf 13, Friedel-1-en-3-one; friedelane-1, 3-dione; 1, 3-dioxofriedelan-24-al and 7α- hydro-xyfriedelane-1,3-dione and 25, 26-oxido-friedel-1, 3-dione are present in root bark 14, 15. Salasones D; salasones E; salaquinone B; salasol B are found in the stem.

Morikawa et al., suggested the presence of wide variety of Triterpenoids like Friedelane-type triterpenes, salasones A, B, and C, norfriedelane-type triterpene, salaquinone A, acylated eudes-mane-type sesquiterpine, salasol A, 3β 22β- dihydroxyolean -12-en-29-oic acid; tingenone; tingenine B; regeol A; triptocalline A are found to be present in stem 16. However, not much literature is available on the antioxidant activity of isolated compounds obtained from Salacia species, which shows that no work has been carried out. Therefore, it is necessary to evaluate the antioxidant and biological activity of various isolated compounds. The present investigation involves isolating and characterizing antioxidant compounds from crude extract to determine their antioxidant activity. 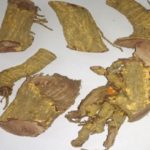 Instruments: The absorbance of extracts and isolated pure compounds at different concentrations were measured by UV–visible spectroscopy (V630 JASCO, Japan) for the determination of antioxidant activity. The measurement of 1H and 13C NMR spectra were carried on Brucker (500 MHz) spectrometer (Pune University, Pune) using TMS as an internal standard. The measurement of FT-IR (4600 JASCO, Japan) was performed by using standard potassium bromide. Mass spectra were recorded on an Agilent 6460Triple Quadrupole LC/MS system and rota evaporator (BUCHI, model I200, Switzerland) used for the concentration of different solvents.

Sample Collections: The roots of Salacia Chinensis were sourced from Mayurbhanj, Orissa. A voucher specimen was collected from the source populations and was identified and authenticated by taxonomist Dr. P. Santhan. The herbarium sheets are maintained at R & D center, Sava Healthcare Ltd, Pune, India.

Extraction: The dried root samples of Salacia chinensis were grounded into coarse powder and the powdered samples 3 kg were further extracted with methanol 3 volume by using a hot extraction 60 ºC method for four hours 3 cycles.

Further ethyl acetate fraction (300 gm) was washed with (25% ethyl acetate: 75% Hexane) 900 ml. The following resulted in two parts; one was soluble 199 g, and the other obtained was insoluble 95 g. Then, the obtained soluble part was washed with hexane for reducing its non-polar impurity, after washing it with hexane the insoluble fraction 150 g was used for column chromatography.

Also, the fresh sample was extracted with water 3 volume by using a hot extraction of 60 ̊C methods for four hours 3 cycles. The resulting extracts of water, methanol, and ethyl acetate from root powder of S. chinensis were then subjected to their antioxidant activity.

Antioxidant Activity: The scavenging activity on α, α-diphenyl-β-picrylhydrazyl (DPPH) free radical was evaluated by the method of Shimada et al., 17 with slight modification. 1 ml of extract (at concentrations of 100, 200, 300, 400 or 500 μg/mL) was taken and to that, DPPH solution (1 mL, 0.1 mM in 95% ethanol) was added. The mixture was shaken and subjected at room temperature for 30 min. The absorbance of the resulting solution was measured at 517 nm. 1 ml of distilled water was used instead of sample for blank and sample control was prepared for each fraction by mixing 1 ml of sample with 1ml of 95% ethanol. BHT was used as a reference at a concentration of 200 μg/mL. Further, the radicle scavenging activity was calculated 18:

Isolation and Characterization Antioxidant Compounds: A different organic solvent like ethyl acetate and hexane was used as a mobile phase for the separation of ethyl acetate extract by using column chromatography. As per the same Rf value, the fractions obtained from column chromatography were mixed together, and the mother solvent was evaporated using a rota evaporator. According to TLC, the similar TLC pattern was integrated to give Fraction 1, Fraction 2, Fraction 3, Fraction 4, Fraction 5, and Fraction 6. Different polar solvents were used for the separation of ethyl acetate extract by using chromatographic techniques. The fractions were subjected to rotary evaporation at ambient temperature. From all the mentioned fractions, only Fraction 5 depicts a single band in TLC. The structural elucidation of the compound is carried out by using MS, IR, and 2D NMR 19, 20.

RESULT: Different solvents like water, methanol, and ethyl acetate were used for the preparation of crude extracts of Salacia root, and the yield obtained is given in Table 2.

Isolation and Characterization of Antioxidant Compounds: The highest antioxidant activity was found in ethyl acetate extract; the separation of ethyl acetate extract was done by column chromatography by the different polarity of solvents. The Fraction 5 obtained from the column chromatography gives a single band in TLC Fig. 2, which indicates the fraction is pure. The structure of the pure compound was elucidated by using IR, MS, and NMR.

Various separation techniques such as thin-layer chromatography (TLC), column chromatography (CC) were used for the separation of compounds from the plant extract. In column chromatography, the mobile phase of different polarity was used for separation of compounds, and silica gel (120-60 mesh) was used as a stationary phase. Firstly, in the performed experiment mobile phase, hexane-ethyl acetate (95:5) was used, and a gradual increase in polarity of the mobile phase was done by the addition of ethyl acetate. In the isolation of pure compounds from crude extracts, polarity plays an important role. The TLC behavior shows that fraction 5 contains a single band as compared to the other fractions of ethyl acetate.

The C-10 methine gives rise to a singlet at d 2.45 and a doublet due to the methyl at C-23 at d 1.07. Based on the above spectral data, the structure of the compound was established as 25, 26-oxido friedelane 1, 3-dione. The presence of two carbonyl groups at 1732 and 1705 cm-1 characteristic diketone system was shown by the IR spectrum.

The IR spectrum showed the presence of 2 carbonyl groups at 1732 and 1705 cm-1 characteristic diketone system. The compound was isolated with a new technique for the first time from the roots of Salacia chinensis with a higher yield. The TLC was carried out, and according to the TLC behavior, the compound was found to be almost pure. 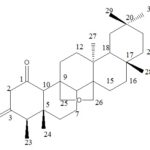 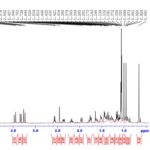 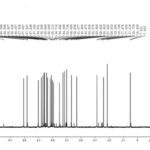 CONCLUSION: Waste substances called free radicals are produced by cells as the body processes food and reacts to the environment. If the body is unable to process and remove free radicals, it will result in oxidative stress. This oxidative stress is directly connected to heart disease, cancer, arthritis, stroke, respiratory diseases, immune deficiency, emphysema, Parkinson's disease, and other inflammatory or ischemic conditions.

ACKNOWLEDGEMENT: I would like to record my gratitude to my esteemed respected guide Dr. A.G. Namdeo, Department of Pharmacognosy, Poona College of Pharmacy, Pune.

CONFLICTS OF INTEREST: The authors declare that there is no conflict of interests regarding the publication of this paper.