CURCUMIN – A REVIEW ON NEUROPROTECTION

CURCUMIN – A REVIEW ON NEUROPROTECTION

ABSTRACT: Treatment based on traditional medicine is very popular in the developing world due to inexpensive properties. There is a growing interest in herbal medicine. Curcumin a hydrophobic poly-phenol is derived from turmeric, the rhizome of the herb Curcuma longa L. Neurodegenerative diseases have become a major challenge for public health because of their incurable status. Curcumin has an outstanding safety profile and a number of pleiotropic actions with potential for neuroprotective efficacy, including anti-inflammatory, antioxidant, and anti-protein-aggregate activities. Because of its pleiotropic actions on the central nervous system, including preferential binding to amyloid proteins, Curcumin is being touted as a promising treatment for age-related brain diseases. This review article aims at gathering information predominantly on neurodegenerative diseases.

INTRODUCTION: Turmeric is a spice that has received much interest from both the medical/scientific worlds as well as from the culinary world. Turmeric is commonly called as “golden spice” or “spice of life” 8. Curcuma longa, commonly known as turmeric, is a perennial herb that belongs to the Zingiberaceae family, with 133 different species available worldwide. Curcuma has been reported to be used in Ayurveda, Siddha, and Unani system of medicines from Vedic times. Turmeric also has special religious significance in Hinduism. It is used as a cooking spice, cosmetic agent, dying agent, and also in medicinal practice to treat various ailments like skin infections and liver and gastrointestinal disorders 48.

Curcuma longa has been traditionally used in Asian countries as a medical herb due to its antioxidant, anti-inflammatory 23, anti-mutagenic, antimicrobial 36, and anticancer properties 47. While in India, its average consumption is estimated to be about 4 g/day 46. Curcumin content in turmeric of turmeric is variable.

Curcumin, a polyphenol, has been shown to target multiple signaling molecules while also demonstrating activity at the cellular level, which has helped to support its multiple health benefits 14. It has been shown to benefit inflammatory conditions 1, metabolic syndrome 33, pain 19, and to help in the management of inflammatory and degenerative eye conditions 27. In addition, therapeutic contributions of curcumin in many neurological diseases have been proven in several studies 13. Lower incidence rate of many neurodegenerative diseases in Indians can be attributed to the regular intake of turmeric in their routine diet 17.

History of Curcumin: Pelletier and Vogel made the remarkable scientific discovery of curcumin by isolating the yellow-colored pigment from the rhizomes of turmeric in 1815. In 1842 they synthesized pure curcumin. Later in 1973, Roughly and Whiting described its detailed chemical structure. Later, chemists discovered that turmeric paper could be used to test the alkalinity of a substance, as the turmeric's orange-yellow root powder color changed into reddish-brown color when treated with alkaline chemicals. Great enthusiasm for curcumin research started after researchers came to know about the botanical history of Curcuma longa from the book, “Maude Greve's book—A Modern Herbal”. Though various Indian medical systems use turmeric from ancient times, German scientists started detailed research in the early 1920s, as they identified the therapeutic potential of oils extracted from the roots of Curcuma herb in 1926. Curcumin is extracted from turmeric by column chromatography, Soxhlet apparatus, pulse ultrasonic, and microwave-based extraction methods 34.

Curcumin is available in several forms, including capsules, tablets, ointments, energy drinks, soaps, and cosmetics 14. Curcuminoids have been approved by the US Food and Drug Administration (FDA) as “Generally Recognized as Safe” (GRAS) 14 and good tolerability and safety profiles have been shown by clinical trials, even at doses between 4000 and 8000 mg/day 2 and of doses up to 12,000 mg/day of 95% concentration of three curcuminoids: curcumin, bisdemethoxycurcumin and demethoxy-curcumin 21. Curcumin has been reported to have a low absorption rate, high biotransformation rate in intestines, and fast elimination rate from the systemic circulation 35.

Structure and Synthesis of Curcumin: Turmeric contains 2-9% curcuminoids, depending upon its biological origin and soil fertility and its place of cultivation. Curcuminoids include compounds like curcumin (77%), demethoxycurcumin (17%) and bis-demethoxycurcumin (3%) 12. The chemical structure of curcumin shows symmetry to molecule formula C21H20O6 (1E, 6E): 1, 7-bis(4-hydroxy- 3-methoxyphenyl)-1, 6-heptadiene-3, 5-dione, with molecular weight of 368.38 g/mol. This molecule has three functional groups attached in its structure: o-Methoxy phenolic groups present in the two aromatic ring systems, associated with a seven carbon attachment comprising α, β-unsaturated β-diketone group, which show keto-enoltautomerism 34. 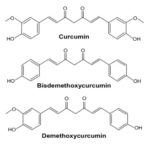 Chemist Lampe synthesized curcumin using carbomethoxy feruloyl chloride and ethyl acetoacetate 20. A new preparatory process of curcumin was developed by Pabon, 2010 using acetylacetone and substituted aromatic aldehydes in the presence of boron trioxide (B2O3), trialkyl borate, and n-butylamine and then stabilized the preparatory method with some minor modifications. Pabon's preparatory method has been used extensively and has a good yield. In this method, 2, 4-diketones reacts with substituted aromatic aldehydes and undergoes Knoevenagel condensation with boron complex to avoid precipitation. In an anhydrous environment, curcumin gets separated easily using polar aprotic solvents. Under a mildly acidic environment, the boron complex breaks into curcumin that can be separated by washing continuously and precipitated by column chromatography 32.

Alzheimer’s Disease (AD): Alzheimer’s disease (AD) is a progressive, fatal neurodegenerative disorder involving chronic CNS inflammation leading to significant oxidative 11, 28, 45. The classical pathology of AD involves neuro-degeneration and the accumulation of protein aggregates to form two major lesions: neuro-fibrillary tangles (NFTs) extracellularly and senile plaques intra-cellularly along with progressive loss of neurons and dendritic spines in the hippocampal and cortical regions. The most important symptoms in AD include a decline in cognitive and motor performances, dementia, and memory loss 5.

Curcumin, because of its strong anti-inflammatory activity, binds with Aβ (Amyloid beta), and prevents protein aggregation and also destabilize the preformed fibril by metal binding 4, 9, 31. Thus, altogether it reduces the progression of neuronal damage in AD brains 43. Curcumin has known to possess potent antioxidant and free radical scavenging activity 15, 29. Oxidative stress increases the concentration of metals like copper, zinc, or iron in the brain. When the concentrates of these metals reach more than 1 mM, their affinity toward Aβ increases. This resulted in an increase in peptide aggregation and enhanced plague formation, which ultimately leads to disease progression 10. Curcumin, because of its free radical scavenging and protein aggregation inhibition, could be a potential therapeutic value in AD.

Huntington’s Disease: Huntington’s disease (HD) is an inherited, an autosomal, neurological, neurodegenerative disorder, characterized by the choreiform movements 40, selective degeneration of striatum spiny GABAergic neurons in basal ganglia which leads to motor and cognitive impairments 24, 18, mood disorders, psychiatric disturbances 16. HD is primarily characterized by the expansion of a polymorphic cytosine-adenine-guanine (CAG) trinucleotide repeat chain encoding N-terminal region of polyglutamine tract within the huntingtin gene (htt) 3. Curcumin, because of its ability to cross the BBB, 22 has been investigated for its therapeutic effects against various motor neurodegenerative disorders. Curcumin has been shown to reverse the polyQ-induced apoptosis and neuronal dysfunction in motor areas of HD patients 39. Thus, curcumin is seen as a potential therapeutic candidate in polyp disease patients 7.

CONCLUSION: Numerous studies have been conducted to test the potential of Curcumin to prevent or treat different neurological diseases. However, several reports have raised questions about its safety and efficacy, especially at high doses, which may be harmful. Curcumin has received worldwide attention for its multiple health benefits, which appear to act primarily through its anti-oxidant and anti-inflammatory mechanisms. Neurodegenerative diseases are complicated age-related disorders with complex neuropathological characteristics. Neuronal damage and cognitive deficits or impairment of motor coordination are the major problems in these diseases. Because of its pleiotropic actions on the nervous system, including anti-amyloid, anti-inflammatory, and anti-oxidant properties, Curcumin is a promising candidate for targeting protein misfolding neurological diseases.

Furthermore, it is safe and inexpensive, readily available, and can effectively penetrate the blood-brain barrier and neuronal membranes. We have provided detailed information on the anti-amyloid properties of Curcumin in major neurodegenerative disorders, such as alzheimer’s disease, parkinson’s disease, and huntington’s disease. Collectively, the information available from reviewing the literature on the therapeutic potential of Curcumin can provide helpful insights into the potential clinical utility of Curcumin for treating neurological diseases.

B. Prathipati and P. Rohini *