ABSTRACT: Dandruff is a common disorder affecting the scalp. Malassezia furfur, the lipophilic dimorphic yeast-like fungus is the main causative agent of dandruff. In recent years plant-based products are widely used as the therapeutic weapon to cure human disorders. The plant Garcinia indica (Kokam) belonging to family Clusiaceae native to India is one of such plants which has shown many therapeutic uses. One part of the present study shows that the optimum conditions for the growth of Malassezia furfur were on sabouraud’s dextrose liquid medium supplemented with corn oil at 30 °C with pH ranging between 8 and 9 and the other part emphasizes on the screening of M. furfur against fractions separated from fruit rinds of G. indica. Out of three screened fractions (Methanolic extract, water fraction and ethyl acetate fraction), ethyl acetate fraction showed a good zone of inhibition 18.2 ± 0.3 mm and 22.6 ± 1.22 mm at 75 and 100% concentration respectively.

INTRODUCTION: Dandruff (pityriasis, capitis, seborrheic dermatitis confined to the scalp) is a disease that has been around for centuries despite several treatment options. It is a common scalp disorder affecting almost half of the pubertal population of both genders but most prevalent in the male population between the age group of 20 to 60 years 1. It is the major cosmetic problem which causes a great public health concern both in the developed as well as developing countries. Dandruff is characterized by slight to moderate scaling of the scalp with varying degrees of sensations of dryness.

Characteristics flaking and scaling of the scalp suggest impairment in the desquamation process. In most of dandruff affected people, hair fall is a very common problem. Malassezia (formerly called as Pityrosporum), yeast like lipophilic basidiomycetous fungi is considered to be the chief cause of dandruff problem which is present as scalp commensal 2. Lipid dependant Malassezia yeasts are commonly found on human skin in particular in the upper part of the body, where sebum secretion is highest 3. Though dandruff is associated with the scalp, flakes may also appear on face, nose, and eyebrows as well as on the skin behind the ears and neck. Due to the impact of the male hormone testosterone, the sebaceous glands are stimulated to secrete more sebum which enhances the microbial growth and also associated formation of dandruff on the scalp.

The Action of the Fungus: Though there are seven different species of Malassezia found, till date the species M. globusa, M. restricta and M. furfur have been mostly related with dandruff in human beings 4. M. furfur is an important causal factor for dandruff. Synthesis of lipase by species Malassezia hydrolyzes triglycerides which then release oleic acid that attracts neutrophils towards them. As a result, neutrophils release the reactive oxygen species and cytokines that aggravate scalp by causing the dermal inflammation and tissue damage 5. Moreover, the released oleic acid accelerates the hyperproliferation of keratinocytes resulting in the deregulation of keratin. As a result, the corneocytes present in the epidermis clump together to form large flakes on the skin which causes irritation and uneasiness 6. Therefore, effective treatment is the need of the hour for people suffering from dandruff formation.

In the current scenario, many synthetic chemical substances are used for treating dandruff. The main active agents present in it are imidazole derivatives such as ketoconazole and other compounds such as selenium sulphide, zinc pyrithione, piroctone olamine, ciclopirox olamine, and many others. They act by removing the scalp thereby reducing Malassezia species adherence to corneocytes and inhibit its further growth. Pharmacological properties of medicinal plants may be used as leads in developing novel therapeutic agents. Today herbal products and extracts are widely used to control various human diseases. Medicinal plants are providing efficient local aid to health care and disease free life. They contain active physiological constituents that over the years have been exploited in traditional medicine for the treatment of various alignments 7.

India is rich in biodiversity and has a wide spectrum of habitats from tropical rainforests to alpine vegetation and from temperate forests to coastal wetlands. About one-third of the country's recorded flora is endemic and is concentrated mainly in the North-East, the Western Ghats, and North-West Himalaya. Western Ghats of India are known for their valuable biodiversity and has been considered as one amongst the top most important eight hotspots in the world 8.

This hotspot of biodiversity is a treasure house of genetic resources of many plant species. Garcinia indica (family- Clusiaceae) is one such tree species endemic to tropical rain forests of Western Ghats of India.

Its fruits are a rich source of hydroxycitric acid (HCA), an important biologically active plant metabolite used as anti-obesity an anti-cholesterol drug. The fruits are also used to prepare a pleasant, attractive beverage which has bilious action. The fat extracted from the seeds is used in cosmetics as emollient. A lot of work has been carried out on various aspects of extracts separated from fruit rinds of Garcinia indica. Fruit rind extracts have shown good anti hyaluronidase and anti-elastase properties 9.

Researchers demonstrated antimicrobial and cytotoxic effects of fruit rinds of G. indica. Garcinol and hydroxycitric acid (HCA) present in G. indica have shown significant antioxidant and antihyperlipidemic activity 10. But there were no reports on the anti-dandruff activity of Garcinia indica. Taking this into consideration it was decided to screen various fractions of fruit rinds of G. indica for their anti-dandruff ability

Microorganism Used: The test organism used in this study was Malassezia furfur (MTCC- 1374). The culture was purchased from the Microbial Type Culture Collection, Chandigarh, India.

A) Preparation of Methanolic Extract: The methanolic extract (ME) was prepared by immersing (20 gm) of dried fruit rinds of indica in 200 ml of acidified methanol (2% Concentrated HCl). The extract was poured in the evaporating dish and allowed to dry at room temperature to obtain 6 gm solid (ME).

B) Separation of Ethyl Acetate Fraction: One gram of ME was dissolved in 50 ml of D/W. To this 50 ml of ethyl acetate was added and two fractions were allowed to separate in a separating funnel for at least one hour. Ethyl acetate fraction (EAF) and water fraction (WF) were separated. Both fractions were air dried to obtain 0.2 gm EAF and 0.5gm WF. These fractions were used to study antidandruff activity.

For Optimization of Malassezia furfur Culture Following Parameters were studied:

Effect of Temperature on Growth of M. furfur: One ml of pure culture broth of M. furfur was inoculated into each tube containing sterilized sabouraud’s dextrose liquid medium and inoculated at 10 °C, 20 °C, 30 °C and 40 °C for 7days.

Peptone: Peptone was added to the sabouraud’s dextrose medium in the concentration of 0, 5, 10, 15 and 20 gm/ liter. A pure culture of M. furfur grown in the liquid medium was inoculated at 30°C for 7 days.

Dextrose: Dextrose was added to the sabouraud’s dextrose medium in the concentration of 0, 20, 40, 60 and 80 gm/ liter. The pure culture of M. furfur grown in the liquid medium was inoculated at 30°C for 7 days. The growth of the organism was determined by turbidity method.

Antifungal Susceptibility Testing by Well Diffusion Method: Malassezia furfur strain (MTCC-1374) was grown on sabouraud’s dextrose agar supplemented with 2% corn oil for one week at 30 °C in an incubator. An M. furfur culture was then further maintained on the same medium with subcultures being carried out every alternate week. Loopful colonies of the organism were transferred to 100 ml of sabouraud’s dextrose broth and maintained for seven days at 30 °C on a shaker till the culture became 70% confluent.

The broth culture of M. furfur was swabbed over the sabouraud’s dextrose agar by using sterile cotton buds. Sterile 5 mm diameter Whatman no. 32 filter paper discs were dipped into all three extracts with various concentrations ranging from 25, 50, 75 and 100%. Terminalia bellarica fruit extract was used as the positive control in the same concentrations as other tested extracts. The replicates were maintained. These plates were incubated at 30 °C and the zone of inhibition was observed after seven days. Control was maintained with filter paper discs dipped in sterile distilled water.

RESULTS AND DISCUSSION: Malassezia furfur is pleomorphic yeast-like fungus. It is also referred to as P. orbicularae and P. ovale depending on the morphology of the cells. When the yeast-like cells are a rounded and budding form with narrow neck then are called as P. orbicularae while on the other hand when yeast cells are oval with broad neck are called as P. ovale. However, in recent years, the name Melassezia furfur is widely accepted for yeast like cells produced by P. orbicularae. It is also well known that the optimum requirement of physicochemical parameters varies depending on the species and the habitat in which they grow.

In the present study, a suitable media for culturing Melassezia furfur was proposed. Optimization of the requirements of M. Furfur in the present study showed that the organism grew well at pH in the range of 8 to 9 while the optimum temperature required was 30°C. Studies also showed that carbon sources like peptone and dextrose were suitable at 10gm/lit and 40 gm/lit respectively Fig. 1. Amongst the various fatty substances, sabouraud’s media supplemented with corn oil showed maximum growth of Melassezia furfur while that with olive oil had the minimum growth Table 1. With these optimum conditions, we could able to grow and maintain pure colonies of M. furfur. 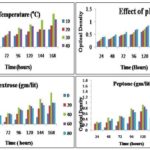 FIG. 1: STANDARDIZATION OF TEMPERATURE, pH AND CARBON SOURCES (DEXTROSE AND PEPTONE) ON THE GROWTH RATE OF M. FURFUR

TABLE 1: EFFECT OF VARIOUS FATTY SUBSTANCES AGAINST THE GROWTH OF M. FURFUR

Antifungal activity of specific bioactive compounds extracted from medicinal plants has attracted a lot of attention within the scientific community largely as a result of the growing problem of multidrug resistance among pathogenic fungi 11. In addition to this medicinal plant extracts are the promising sources of antifungal drugs, even though they have relatively mild effect against human pathogenic fungi when compared with the commercial synthetic drugs 12. Garcinia indica commonly known as Kokam plant has already gained a lot of attention due to its various anti-inflammatory, antioxidant, free radical scavenging activities. Anti-dandruff activity of three fractions separated from fruit rinds of G. indica against Malassezia furfur at multiple concentrations (25, 50, 75 and 100%) was examined. It was observed that parent methanolic extract exhibited a week inhibition zone of 5.3 mm only at 100% concentration.

Out of the two fractions separated from ME, ethyl acetate fraction showed good inhibition at higher concentration, i.e. 18.2 ± 0.3 mm and 22.6 ± 1.22 mm at 75 and 100% respectively Table 2. The water fraction was not effective in inhibiting the growth of Malassezia furfur.

DISCUSSION: It was reported that Terminalia chebula and Terminalia bellerica exhibited a significant inhibition activity against Malassezia furfur. They also showed that Lantana camara which was less effective against the fungus, but if used in combination with Terminalia chebula showed good synergistic effects against the fungus 13. Anti Pityrosporum activity of the herbal drug, a combination of Wrightia tinctoria and Hibiscus rosasinensis was tested in-vitro against the isolates of Pityrosporum ovale recovered from dandruff 14. In another study, screening with four plants (Aloe vera, Eucalyptus globulus, Phyllanthus embilca, and Wrightia tinctoria), E. globulus (30 ± 1.14) and Aloe vera (29 ± 0.94) were found to be very much effective against this dandruff causing fungus 15.

CONCLUSION: In the present study, among the various tested fractions, only ethyl acetate fraction at higher concentrations (75% and above) showed a good inhibition against Malassezia furfur while other two fractions had no detectable inhibitory effect against the fungus. As mentioned earlier Terminalia chebula and Terminalia bellerica were effective against Melassezia furfur. Study of synergistic effects of EAF of fruit rinds of Garcinia indica and Terminalia species may prove to be beneficial and hence needs to be tested in future.

ACKNOWLEDGEMENT: The authors thank the University of Mumbai for sanctioning Minor Research Project. We also thank Principal and Head of the Botany Department for providing the laboratory facilities and encouragement.

A. Sahasrabudhe* and M. Phanse