INTRODUCTION: Medicinal plants with therapeutic potential are commonly used through-out the world as a folk medicine in various indigenous medicine systems such as Ayurveda, Siddha, Unani, etc. Therapeutic plants can be used as a refined pharmaceutical industry product or as polyherbal extract. Various medicinal plants have been identified as laboratories for the biosynthesis of a wide range of compounds, including glycosides, alkaloids etc. 1, 2. Active plant constituents play an important role in the prevention and treatment of diseases. Therefore active plant products can be used to develop a new formulation for the novel drugs in the pharmaceutical field 3.

As per World Health Organization, a medicinal plant is defined as a whole plant, or plant parts contain a substance that can be used for therapeutic purposes or which is a precursor for the synthesis of useful drug 4. Medicinal plants are rich sources of useful compounds that can be used in the synthesis of medicines. In addition, these plants play a major role in the development of human culture around the world 5.

WHO recently published a strategic plan for the development and promotion of traditional medicine in the following four areas 6, 7.

In which the Cordioideae is one and contains the genus Cordia 8, 9. Thirteen species of this genus found in India. Cordia macleodii is one of them, a rare and commonly known as Dahiphalas or Dahiman. It is a small-sized tree, native to India and having white flowers, broadly ovate, glabrous, green leaves with a cordate base and crenate dentate margins. Various pharmacological studies indicate that the plants of Cordia macleodii show analgesic, anti-inflammatory, antimicrobial, wound healing, hepatoprotective, acute toxicity, and antioxidant activity 10, 11.

Morphology: It is a 9-12 m high tree with light green bark having thickness 12-15 mm Fig. 1.1. The leaves are broadly ovate Fig. 1.2, shiny dark green on the dorsal surface, and light green on the ventral surface with numerous hairs. Flowers are yellowish-white in color Fig. 1.3, polygamous, subsessile, in the dense paniculate terminal and axillary tomentose cymes; male flowers with a rudimentary ovary but without style or stigma. Calyx is 0.6 to 0.8 mm long, obconic, densely tomentose, ribbed, lobes. The corolla is yellowish-white in color. The drupes are 1.2 to 1.9 cm long, ovoid, acuminate at apex, seated at persistent calyx. The flowers appear in March to April, and fruits appear in Mar to June 12, 13, 14. 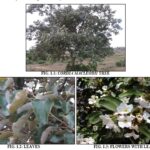 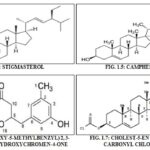 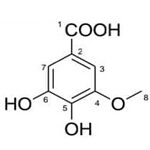 Analgesic Activity: Analgesics or painkillers are commercially available drugs or groups of drugs used to relieve pain, and they act in various ways on the central and peripheral nervous system 22. The extracts of Cordia macleodii were investigated for analgesic activity using hot Plate test in mice at different time intervals in hot plate analgesiometer study. Extracts of Cordia macleodii demonstrated good analgesic activity. Analgesic effects of the extracts at doses of 400 mg/kg were comparable with the analgesic effect of Pentazocin at 10 mg/kg. After the administration of the doses, the analgesic effects of the extracts were maximum at 60 and 90 min 23, 15.

Anti-Inflammatory Activity: Inflammation is defined as the complex biological response of body tissue to harmful stimuli such as pathogen, damaged cells, or irritants and is a protective response involving immune cells, blood vessels, and molecular mediators 24. Cordia macleodii leaves extracts were checked for anti-inflammatory activity by carrageenan-induced rat paw edema method. Cordia macleodii extracts inhibited the carageenan induced edema when compared with the control group, and the extracts demonstrated significant anti-inflammatory activity. Five hours after carrageenan challenge, the Cordia macleodii extract inhibited edema to the extent of 44% in comparison with standard Diclofenacdiethylamine which inhibited edema to the extent of 92% 23.

Antimicrobial and Antifungal Activity: The antibacterial potential of water extract of the leaf (1B) of Cordia macleodii was found to be more than the standard drug ciprofloxacin. The Cordia macleodii extracts were active against gram-positive bacteria B. subtilis and fungi A. niger. It observed that the extracts collected after 12 h exhibited comparatively more antibacterial and antifungal values than the extracts collected after 6 h. Further optimization in the extraction method and identification of the chemical constituent in the leaf and stem extracts can help in providing a newer antimicrobial agent to the society 25.

The Cordia macleodii bark methanolic extract also showed significant antibacterial activity against two gram-negative bacteria E. coli, Pseudomonas aeruginosa, and two gram-positive bacteria Streptococcus pyogenes, Staphylococcus aurens by agar plate method zone of inhibition with different standard.  Growth inhibition of bacteria was more pronounced on E. coli and S. aurens as compared to the other tested organism 18. The leaf and stem extracts of Cordia macleodii of different solvents were investigated for evaluating antifungal properties. For the study, only a single fungal strain was taken, and was observed that antifungal potential of the water extracts was found to be excellent. Leaf (38 mm) and stem (22 mm) compared to the other extract 26.

Hepatoprotective Activity: Aqueous and ethanolic extracts of cordial macleodii have hepatoprotective activity effect against CCL4 and ethanol induced hepatotoxicity in rats and suggest that aqueous and ethanolic extracts of barks Cordia macleodii have the capacity to regenerate and repair liver 27. The extracts were evaluated for hepatoprotective activity by carbon tetrachloride (CCl4) induced liver damage model in rats in comparison with reference standard Silymarin. Cordia macleodii leaves extracts inhibited CCl4 induced increase in total bilirubin and GOT, GPT, and ALP levels in serum as compared with CCl4 treated group as compared to the reference standard Silymarin 28, 15.

The extracts of bark were found to contain a noticeable amount of total phenols, which play a major role in controlling oxidation. The study shows that the extracts of Cordia macleodii bark can be used as an easily accessible source of natural antioxidant 30.

Wound Healing Activity: Wound healing properties of ghrita based formation of Cordiama cleodii leaf has been reported through an exploratory, open, and controlled study. For the evaluation, randomly, 20 patients were selected in two groups. In which one group was treated with C. macleodii ghrita and second one was with povidine iodine as a local application. The action of the drug on signs and symptoms was observed. The study shows significant change in discharge, tenderness, wound margin, and wound size in Cordia macleodii ghrita treated group 31.

Only a few pharmacological and phytochemistry studies have been conducted on this plant. Till now, only five active phytoconstituents have been isolated from this tree. They are as follows, Stigmasterol, Camphesterol, 2-(3-hydroxy-5- methylbenzyl) 2, 3 - dihydro - 5, 7 -dihydro-xychromen - 4 - one, Cholest - 5 – en - 3ol (3Beta)-Carbonyl chlorinated and 3,4-dihydroxy-5-metho-xybenzoic acidare present in leaves and bark of Cordia macleodii. Significant pharmacological actions, plant morphology, plant habitat, and plant phytochemistry have been described.