INTRODUCTION: India has a rich heritage of traditional medicine constituting with its different components like Ayurveda, Siddha and Unani and traditional health care has been flourishing in this country for many centuries. Botanicals constitute of major part of these traditional medicines. With the emerging worldwide interest, in adopting traditional practices, in the health care systems by exploiting their potential, the evaluation of the botanicals in these systems of medicine in India is utmost essential 1.

Herbalism (herbal medicine) as an alternative medical therapy is defined as the use of plants or substances derived from them, in treating disease, usually by medical herbalists without an orthodox medical qualification. Before the relatively recent application of scientific method into diagnosis and therapeutics, traditional medicines were mostly herbal 2.

Ayurvedic system understanding the knowledge of plants used for Ayurvedic preparations in relation to their use as therapeutic agents, pharmacological properties, medicinal plants being imported; medicinal plant parts being exported, endangered medicinal plants and availability of medicinal plants in different bio-geographical zones of India can be utilized in drawing strategies for rational and more scientific use of medicinal plants in a way that can be extended for future scientific investigation in different aspects 3. There were thought to be roughly 1300 species of Acacia worldwide, about 960 of them native to Australia, with the remainder spread around the tropical to warm-temperate regions of both hemispheres, including Europe, Africa, southern Asia, and the Americas.

The use of natural products, especially plants, for healing is as ancient and universal as medicine itself. Natural products have been an integral part of the ancient traditional medicine systems, e.g. Chinese, Ayurvedic and Egyptian. Even now, continuous traditions of natural product therapy exist throughout the third world, especially in the orient, where numerous minerals, animal substances and plants are still in common use. This recent resurgence of interest in plant remedies has been spurred on by several factors: 4

Medicinal plants are generally known as “Chemical Goldmines” as they contain natural chemicals, which are acceptable to human and animal systems. Of the 2,50,000 higher plant species on earth, more than 80,000 are medicinal in nature.

The Red Data Book of India has 427 entries of endangered species of which 28 are considered extinct, 124 threatened, 81 vulnerable, 100 rare and 34 insufficiently known species 5.

The Origin, Scope and Practice of Pharmacognosy: The history of herbal medicines is as old as human civilization. The documents, many of which are of great antiquity, revealed that plants were used medicinally in China, India, Egypt and Greece long before the beginning of the Christian era. One of the most famous surviving remnants is Papyrus Ebers, a scroll some 60 feet long and a foot wide, dating back to the sixteenth century before Christ 6. Indians also, worked meticulously to examine and classify the herbs which they came across, into groups called Gunas. Charaka made fifty groups of ten herbs each of which, according to him, would suffice an ordinary physician’s need.

Similarly, Sushrutha arranged 760 herbs in 7 distinct sets based on some of their common properties. A large portion of the Indian population even today depends on the Indian System of Medicine - Ayurveda, ‘An ancient science of life’. The well known treaties in Ayurveda are Charaka Samhita and Sushrutha Samhita. The first pharmacist, Galen, was known to have had a number of pain relieving materials, including opium in his apothecary 7. 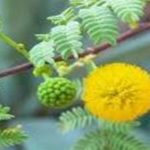 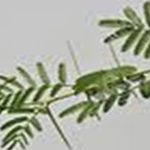 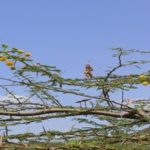 Prosopis juliflora (Sw.) DC (Mimosaceae) commonly known as mesquite is a shrub or small tree native to Mexico, South America and the Caribbean. P. juliflora probably originates from Peru; it occurs naturally in dry areas of northern South America and Central America, Mexico and southern USA. It has been introduced into many tropical areas, including northeastern Brazil, Africa, Australia, Southeast Asia and the Indian subcontinent. P. juliflora is xerophytic and is adapted to many soil types under a wide range of moisture conditions. The value of the tree lies in its exceptional tolerance of drought and marginal soils. It tolerates strongly saline soils and seasonal water logging. P. juliflora has been planted successfully on soils with acid to alkaline reaction. It is sometimes said to dry out the soil and compete with grasses, particularly in dry areas 8. 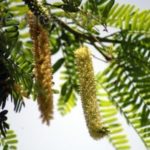 Collection of Plant: The plant materials were collected from the Jhansi and Lucknow.

Authentication of Plant: The materials were authenticated at Indian Grassland and Fodder Research Institute, Jhansi, India. Sample specimens have been identified as Prosopis juliflora (SW.) DC. of the family Fabaceae .

Processing of Plant Material for Study: The materials for final study were prepared by the following procedure:

Washing: Foreign material was identified and discarded through washing.

Drying: Plant material was dried in shed to prevent decomposition of the chemical constituents.

Solvent: Hexane, chloroform, acetone, methanol and distilled water. In successive extraction process the powdered plant material is extracted with non polar to polar solvent i.e. hexane, chloroform, acetone, methanol, water and so on the basis of the polarity of content in the plant material will be extracted out in particular solvent like non polar in hexane and chloroform, intermediate polar in acetone or high polar in methanol and water.

Soxhlet apparatus (Hot percolation method) was used for successive extraction. Here continuous extraction of a drug or any other substance which is recommended in the monograph is done. The process consists of percolating it with suitable solvents at a temperature approximately that of the boiling point of the solvent. Any apparatus that permits the uniform percolation of the drug and the continuous flow of the vapour of the solvent around the percolator may be used.

Methodology: Assembly was arranged and thimble was prepared and placed 10 g of air dried powdered drug was extracted with hexane for 3 days, than extract solution was collected and concentrate under vacuum using Rota-vapour. Then the plant material was again collected and air dried. When completely dried it was again packed back in the thimble. Same method was repeated for chloroform, acetone, ethanol and water. Finally the dried extracts were collected in pre-weighted glass vials and post-weight for each vial was taken. Extracts for fruit of Acacia arabica Linn. was collected and finally the percentage yield was calculated for all the extracts of all the parts.

X = difference in weight of the vial

I. Molisch’s Test: Treat the extract with few drop of alcoholic α-naphthol, add 0.2 ml of concentrated sulfuric acid slowly through side surface of test tube, purple to violet color ring appears at the junction.

III. Fehling’s Test: Equal volume of fehling A (copper sulfate in distilled water) and fehling B (potassium tartarate and sodium hydroxide in distilled water) reagent are mixed along with few amount of extract, boil on water bath, brick red ppt of cuprous oxide forms, if reducing sugar are present.

IV. Caramelisation: Carbohydrate when treated with strong sulfuric acid, they undergo charring with the dehydration along with burning sugar smell.

Test for Protein and Amino Acid:

Test for Sterols and Triterpenoids:

I. Libermann-burchard Test: Extract treated with few drops of acitic anhydride, boil and cool and concentrated sulphuric acid is added from the side of the test tube, shows brown ring at the junction of two layers and the upper layer turns green which shows the presence of sterols and formation of deep red color indicate the presence of triterpinoids.

II. Chloroform extract and acetic anhydride and conc. sulphuric acid from the side wall of the test tube upper layer turns green shows the presence of steroid.

III. Alkaline Reagent Test: To the extract add few drop of sodium hydroxide solution, formation of an intense yellow color which turns to colorless on addition of few drops of dilute acetic acid indicate the presence of flavonoid.

Test for Saponins: A portion of extract obtained dissolved in distilled water and shaken vigorously honeycomb froth persisting for 15 min indicate the presence of saponins.

Test for Resins: Extract dissolve in acetone and this solution was added to distilled water turbidity indicate the presence of resins.

II. The alcoholic, chloroform and water extractive were treated with acetic acid, ferric chloride and 2-4 drops of concentrated sulfuric acid, formation of blue colour indicate the presence of glycoside.

The HPTLC technique in standardization is required for-

Preparation of Methanolic Extracts: Methanolic extract of stem bark, leaf and twig of Acacia arabica and Prosopis juliflora (SW). DC. was prepared through cold percolation by using 2 g of powdered material in 100 ml of methanol.

Sample Preparation: A stock solution of methanolic extract of concentration 10 mg/ml was prepared for all the parts of Acacia arabica and Prosopis juliflora.

Standard Preparation: A stock solution of concentration 1 mg/ml was prepared for each reference standard.

Sample Applicator: The CAMAG Linomate-5 applicator for application of sample in the form of narrow bands, particularly analysis of mixture compound like plant extracts it is advantageous to start with compact, narrow sample application zones as they guarantee optimum resolution for a given planar chromatographic system, the CAMAG linomate-5 uses the spry-on technique for applying samples on to the chromatogram layer as narrow band this permits the application of larger sample volume than is possible with contact sample transfer, as the solvent almost completely evaporated during the process even when strongly polar solvents are used e.g. methanolic or aqueous remain contact and narrow.

When larger volume requires especially in preparative applications, a 500 µl syringe can be used instead of the standard 100 µl dosage syringe, another advantage of the linomat-5 is its self adjusting plate support. It allows the use of layers differing in thickness without readjusting the spray nozzle. This feature makes attractive for the preparative application.

Video Documentation: The eluted plate can be analyzed under CAMAG Reproster-3 for the UV visualization at different λ value like 254 nm and 366 nm.

Scanning of Tracks: Eluted plate have different tracks of elute which are densitometrically scanned using CAMAG Scanner-3 at the respective wavelengths or at the multi wavelength for the crude extract gives area under curve for respective component present in the extract and the amount of the component will be quantify. 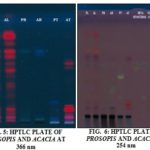 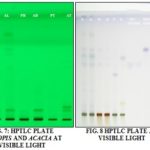 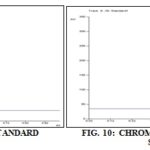 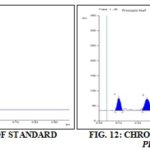 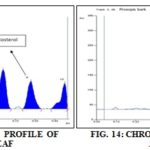 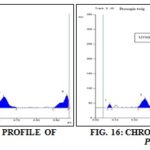 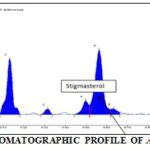 DPPH Radical Scavenging Assay: The effect of extract on DPPH radical was estimated using the method of Liyana-Pathirana and Shahidi.

Methodology: A solution of 0.135 mM DPPH in methanol was prepared and 1.0 ml of this solution was mixed with 1 ml of extract in methanol containing 0.02-0.1 mg of the extract. The reaction mixture was vortexed thoroughly and left in the dark at room temperature for 30 min the absorbance of mixture was measured spectro-photometrically at 517 nm ascorbic acid, were used as references. The ability to scavenge DPPH radicals was calculated by the following equation:

TABLE 9: PERCENTAGE OF STANDARDS AND SAMPLE 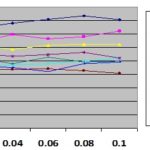 Antioxidant Activity: In-vitro DPPH free radical scavenging activity of the methanolic extract of all the parts of Acacia Arabica and Prosopis juliflora (Sw.) DC. were compared with ascorbic acid and querecitin (standard used) was observed which showed that extract of Arabica leaf shows higher activity followed by bark, and twigs. At a concentration of 0.1 mg/ml the scavenging activity of the leaf reached 62.34%, while at the same concentration bark and twig have 52.3% and 52.35% activity, Prosopis leaf have minimum 40.88% activity and twig and bark have 49.4%  and 50% activity.

CONCLUSION: It is concluded that given plant is Acacia arabica and Prosopis julifera, I have done the comparative pharmacognostical study between Acacia arabica and Prosopis juliflora and conclude that Acacia arabica plays more significant role and has more scientific value. phytochemical screening revealed the present of  Tannin Alkaloids, steroids and Terpenoids in various extracts  however most of the medicinally potential phytoconstituents where present in alcoholic and aqueous extracts, methanolic extracts used for the HPTLC analysis. Several medicinal properties have been scientifically established by various worker.

ACKNOWLEDGEMENT: The authors thankful with our deepest core of heart to Mr. Vikram Singh (Assistant Professor), for his valuable guidance.