Mediterranean bay leaf (Laurus nobilis) is an evergreen shrub or small tree variable in size and sometimes reaching 7-18 m (23-59ft) tall. It is dioecious (unisexual). Its flowers are pale yellow-green about 1 cm (0.39 inches) in diameter and are borne in pairs beside a leaf.

Its leaves are glabrous, 6-12 cm (2.4-4.7 inches) long and 2-4 cm (0.79-1.57 inches) broad with an entire (Untoothed) margin. On some leaves, the margin undulates. Its fruit is a small, shiny, black, berry-like drupe about 1cm (0.39 inches) long that contains one seed. The bay tree is indigenous to Asia Minor, from where it spread to the Mediterranean and then to other countries with similar climates. It grows widely in scrubland woods in Europe and California.

It is widely cultivated in Europe, America, and Arabian countries. Laurus nobilis is traded as sweet bay leaf and true Romanor Turkish laurel Fig. 1. It is a small evergreen tree of Lauraceae family. It is a hardy multi-branched tree with smooth bark that grows to about 10 m high. It has alternate, narrowly oblong-lanceolate leaves. The flowers are small and four-lobed; the male has 8-12 stamens and female 2-4 staminodes. The fruit is 10-15 mm, ovoid and black when ripe 1. 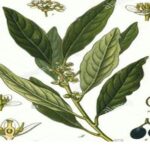 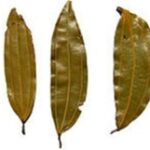 The essential oil of Laurus nobilis is more effective against gram-negative than gram-positive bacteria. Laurus nobilis is one of the most widely used culinary spices. The leaves and berries are commonly used as a spice and enhancer for foods, especially for meats, sauces, and soups. The infusion of its leaves is used to improve appetite. The infusion of leaves is used to improve appetite. The leaves and fruits are not to be chewed 3. The essential oil of two commercial Laurus nobilis samples consisted of oxygenated monoterpenes (29.82 and 37.60%), oxygenated sesquiterpenes (15.98 and 22.99%), and phenylpropanoids (24.78 and 26.33%), respectively. High content of methyl eugenol (19 ± 4%; 21 ± 1%) and α-terpinyl acetate (18 ± 5%; 17 ± 7%) was found in samples, whereas 1,8-cineole (51%) and α-terpinyl acetate (10%) were the main compounds in another commercial pharmaceutical sample 4-6. Phytochemical investigation on Laurus nobilis leaf infusion revealed the presence of several flavonoid derivatives were detected, including flavonoid C-glycosides, catechin, and cinnamtannin B1 7.

Indian bay leaf Fig. 2 is also named malabathrum; this type of bay leaf is distinguished by smell and taste typical of cinnamon but in lower quantities. Usually, Indian bay leaf looks like the other varieties, which is also why it bears this name. However, this is incorrect, since it is of the same family as laurel, but of a different genus. Indian bay leaf is not used as the other types, since it is closer to Chinese cinnamon in smell and in taste. Cinnamomum tamala known as tejpat in trade, found in the Himalayan region, is a promising medicinal plant species. Its leaves are widely used as a spice throughout the world since ancient times. It is used in the Indian system of traditional medicines in various Ayurvedic formulations. Its leaves and bark have aromatic, astringent, stimulant, and carminative qualities used in rheumatism, colic, diarrhea, nausea, and vomiting 8. Also known as salam leaf, this subspecies of bay leaf is used mainly in Indonesia and Malaysia. The fresh or dried leaves are primarily used to season meat and, in rare cases- vegetables. Indonesian bay leaf has a different and fainter smell than the other varieties. Furthermore, to release its flavor, it needs to go through specific heat treatment. Leaves, fruits, and barks of Syzygium polyanthum Fig. 3 are traditionally used for various medicinal and non-medicinal purposes. The roots and the fruits are consumed to reverse the hangover effect of alcohol, whereas the leaves are traditionally consumed for treating various illnesses such as diabetes mellitus, hypertension, gastritis, ulcers, diarrhea, skin diseases, as well as infections 9. 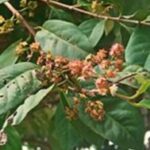 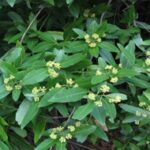 Californian bay leaf (Umbellularia californica) is also known as Oregon myrtle. The leaves are incredibly similar to the ones of the Mediterranean bay leaf but differ in that they are more intense and more saturated in taste. For this reason, caution must be taken when using it. It is broad-leaved, evergreen, and matures either as a shrub or tall forest tree. It grows naturally in the extreme western United States of America from mid-Oregon southward to the Mexican border. The ovoid mature seeds of the species are slightly less than 2cm in length and surrounded by a thin shell. The seeds are rich in triglycerols which have been reported to contain between 43 and 70% lipid by weight 10.

Syzygium guineense Fig. 5, also known as water berry, is a medium-sized or tall evergreen tree, 13-30 m high. The bark varies in subspecies and is grayish-white or silver mottled and smooth in young trees, turning rough, flaky, creamy, light grey, dark brown, or black in older trees. Leaves narrow at both ends, length 5-17.5 cm, width 1.3-7.5 cm; simple, opposite, elliptic, lanceolate or ovate-elliptic; with margins that are untoothed and sometimes slightly wavy and rolled inward; apex obtuse to acuminate and rounded, occasionally notched; base cuneate; stalk short and grooved; midrib sunken on top, raised below, with many fine, lateral veins; glaborous, grey-green, tough, shiny; fragrant when crushed. Its flowers (filaments) are 1.5 cm in diameter, sessile or subsessile, fragrant, creamy-white; borne in terminal pinnacles forming heads up to 10 × 10 cm, or with 4-8 widely spaced flowers in branched heads up to 3cm in diameter; calyx persistent with 4 petals; stamens numerous, about 6mm long. Petals fall early, but the white stamens are showy, making a conspicuous short brush or puff contrasting with the red or pink calyx tips. The fruits are ovoid or ellipsoid drupes, 1.2-3.5 m, 2-3 celled, in brunches of 20-30, whitish-green when immature, turning to shiny purplish-black and juicy after ripening; 1-seeded. Seeds are 1.3-1.4 cm in diameter, yellowish to brownish, and rounded. A root infusion is used to treat epilepsy. Bark decoction is used against stomach ache, diarrhea, and malaria. They are also considered mildly laxative and are applied in baths as a tonic. An infusion is taken against cough, asthma, and throat problems 11.

Syzygium guineense has long history of use as folklore medicine for various ailments by the people of Nigeria and other African countries. Investigation of this plant was carried out to evaluate antioxidant and antimicrobial properties of characterized essential oil of the leaf of Syzygium guineense. An essential oil obtained by hydro-distillation was characterized by gas chromato-graphy coupled with mass spectrometry (GC-MS). The antioxidant potential was determined by measuring the inhibition of 2, 2-diphenyl-1-picrylhydrazyl hydrate radical (DPPH). The inhibitory effects of the essential oil were tested against five bacteria namely Mycobacterium bovis, Escherichia coli, Klebsiella pneumonia, Pseudo-monas aeruginosa and Staphylococcus aureus and one fungus: Candida albicans using broth microdilution method. The GC-MS analysis revealed the presence of 46 components accounting for 92.63% of the essential oil constituents. Sesquiterpenoids (73.15%) and monoterpenoids (14.17%) were the main classes of the essential oil. Aromadendrene (6.98%), germacrene-B (5.52%) and β-selinene (3.94%) were the predominant sesquiterpene hydrocarbons. The oxygenated sesquiterpenes were α-cadinol (6.68%), τ-cadino (6.64%) and caryophyllene oxide (5.44%). Butylated hydroxytoluene (BHT) exhibited higher antioxidant activity compared to the essential oil. The essential oil exhibited strong antimicrobial activities against the tested microorganism with MIC ranging between 25-100 µg/ml. Results indicated that the essential leaf oil of S. guineense had a high proportion of sesquiterpenoids (73.15%) with strong antioxidant and antimicrobial activities.

Syzygium eucalyptoides Fig. 6 is an evergreen shrub or tree that can grow up to 6 meters tall, also known as white apple or native apple. Syzygium eucalyptoides is native to Western Australia and is found in the parts of Nigeria with a humid tropical climate like Abuja and Enugu. Its fruit is taken to lower the risk of diabetes, prevent cancer, and to fight asthma 12. 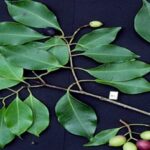 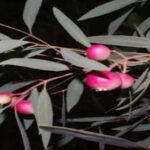 Many Nigerians make use of imported bay leaf (Laurus nobilis) in cooking. The importation of bay leaf to Nigeria could have health risks and negative impacts on the Nigerian economy. Nigeria has a rich biodiversity of aromatic leaf used in cooking and does not need to import bay leaf. It is against this background that needs to be arose to find a Nigerian substitute for Laurus nobilis. Hence, this study aimed at the GC-MS evaluation of Laurus nobilis, Syzygium guineense, and Syzygium eucalyptoides leaf essential oils toward comparing their chemical constituents for similarity assessment in search of Nigerian bay leaf.

Isolation of Essential Oils: The dried leaves of Laurus nobilis, Syzygium eucalyptoides, and Syzygium guineense were chopped into small pieces and hydro distilled separately for four hours. The essential oils were collected separately, dried with anhydrous sodium sulphate, and used within four hours for analysis.

Gas Chromatography-Mass Spectrometry (GC-MS) Analysis: The essential oils were analyzed by GC-MS using Shimadzu QP-2010 GC with QP-2010 Mass Selective Detector [MSD, operated in the EI mode (electron energy = 70eV), scan range of 45-400 amu and scan rate of 3.99 scans/sec], and Shimadzu GC-MS solution data system. The Gas chromatography column was Optima-5 ms fused silica capillary with 5% phenyl-methylpolysiloxane stationary phase, with length of 30 m, the internal diameter of 0.25 mm and film thickness of 0.25 µm. The carrier gas was helium with a flow rate of 1.61 mL/min. The program used for Gas chromate-graphy oven temperature was 60-180 ºC at a rate of 10 ºC / min and then held at 280 ºC. Helium was used as a carrier gas at a flow rate 1.61 mL/min. A diluted sample (1/100 in hexane, v/v) of 1.0µL was injected using autosampler and in the split mode with ratio of 10:90. Individual constituents were identified by comparing their mass spectra with known compounds and NIST Mass Spectral Library (NIST). The percentages of each com-ponent were reported as raw percentages on dry weight basis. The essential oil constituents of Laurus nobilis, Syzygium guineense and Syzygium eucalyptoides are shown in Table 1.

In the present study, the chemical constituents of the essential oil of Laurus nobilis leaf based on the gas chromatography-mass spectrometry (GM-MS) analysis, contained eucalyptol (9.33%), α- pinene (8.31%), camphene (3.17%) as the predominant components. The variation in the percentage composition obtained in the present study compared to Laurus nobilis leaf from Northern Cyprus may is due to geographical factors, weather, and soil. Eucalyptol is a terpenoid oxide compound with anti-inflammatory and antioxidant effects; and finds application in respiratory disease, pancreatitis, cardiovascular and neurodegenerative diseases 15.

The chemical constituents of the essential oil of Syzygium guineense have been previously identified by gas chromatography mass spectrometry (GC-MS) and contained the highest percentage of α-humulene (39.5%) followed by β-caryophyllene (20.1%), citronellyl pentanoate (15.2%),  cis-calamenen-10-ol (14%), α-cadinol (12.7%), epiacadinol (9.8%), viridiflorol (7.5%), δ-cadinene (7.5%) and caryophyllene oxide (7%). In the present study, GC-MS analysis of Syzygium guineense leaf essential oil had the highest percentage composition of β-myrcene (12.29%) followed by globulol (7.60%), phytol (6.63%), and trans-ocimene (6.08%). β-myrcene has the potential for enhancing transdermal absorption. It has a significant analgesic effect and has shown powerful anti-inflammatory and anticatabolic effects in a human model of osteoarthritis and is also found in the oil of Laurus nobilis 16.

Phytol is diterpene alcohol from chlorophyll widely used as a food additive and in medicinal fields, processes promising antischistosomal properties in vitro and in a mouse model of Schistosomiasis mansoni 18.