COCOA FLAVONOIDS AND ITS EFFECTS ON CARDIOVASCULAR DISEASES- A SHORT REVIEW

COCOA FLAVONOIDS AND ITS EFFECTS ON CARDIOVASCULAR DISEASES- A SHORT REVIEW

ABSTRACT: Cocoa and chocolate can also be rich sources of flavonoids. Flavanols isolated from cocoa exhibit strong antioxidant properties in-vitro. Flavanol-rich cocoa and chocolate increased plasma antioxidant capacity and reduced platelet reactivity. Flavonoids are phenolic substances isolated from a wide range of vascular plants, almost over 8000 individual compounds known. They act in plants as antioxidants. Many studies have suggested that flavonoids exhibit biological activities, including antiallergenic, antiviral, anti-inflammatory, and vasodilating actions. Most interest has been devoted to the antioxidant activity of flavonoids, which is due to their capability to reduce the free radical formation and to scavenge free radicals. Most ingested flavonoids are extensively degraded to various phenolic acids, some of which still contain a radical scavenging ability. Both the absorbed flavonoids and their metabolites may display an in-vivo antioxidant activity. This review presents the current knowledge on structural aspects of most common flavonoids as in-vivo antioxidant and their effects on platelets, bioavailability, and cardiovascular disease.

INTRODUCTION: Chocolate and cocoa are rich in flavonoids and have been associated with decreased risk of cardiovascular diseases 1, 2 and the concept that flavonoids and other phenolic compounds are responsible are supported by some animal and in-vitro studies 3. Flavonoids have powerful antioxidant activities in-vitro, being able to forge a wide range of reactive oxygen, chlorine and nitrogen species, such as superoxide, hydroxyl radical, hypochlorous acid. They can also chelate metal ions, often decreasing metal ion pro-oxidant activity 4. It has been logical to attribute the alleged protective effects of flavonoids to their antioxidant ability.

Protective effects of foods and beverages rich in flavonoids do not necessarily equate to protective effects of flavonoids 5, 6. Flavonoids and other phenols are complex molecules and are likely to have multiple potential biological activities, such as inhibiting telomerase 7, affecting signal trans-duction pathways 8, inhibiting cyclooxygenases and lipoxygenases 9, 10, decreasing xanthine oxidase 11, angiotensin - converting enzyme 12, and sulfotransferase 13 activities. Flavonoids may also interact with cellular drug transport systems 14, contend with glucose for transmembrane transportation 15, and affect platelet function 16.

Many of the products of metabolism, such as methylated and glucuronidated form must have decreased antioxidant activity because of the blocking of radical-scavenging phenolic hydroxyl groups 17. Flavonoids are xenobiotics, as indicated by their patterns of metabolism, and cytotoxic effects have been observed in-vitro and in-vivo 18, 19, 20. Again, the physiologic relevance of such effects is unclear. It is unlikely, however, that all of the cellular effects of flavonoids observed in cell culture studies are artifacts 21, 22. In the American diet, fruits, vegetables, wine, tea, and chocolate are major sources of antioxidants, which show their protective effects against CVD 23, 24.

Flavonoids, commonly found in such foods, have concerned great interest in potentially lowering risk of CVD. Since, cocoa products contain better antioxidant capacity and greater amounts of flavonoids per serving than all teas and red wines 24, 25, it is important to explore chocolate's potential effects on CVD. Flavanol-rich, plant-derived foods, and beverages include wine, tea, fruits, and berries, also found in higher concentrations in cocoa and cocoa products, in which flavanols can be present as monomers epicatechin and catechin 26. 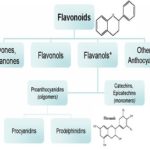 Antioxidant Flavanol in Cocoa: Cocoa represents another example of a potentially rich dietary source of flavonoids. Elevated concentrations of flavonoids are present in certain cocoas, predominately as the flavanol monomers epicatechin and catechin, and as oligomers of these monomeric base units, which are known as the procyanidins 27, 28. Cocoa is derived from the beans of Theobroma cacao, a tree native to South America 29.

Historically, the Olmec, Maya, and Aztec peoples considered cacao to have strong medicinal properties. Numerous applications for the use of cacao in these cultures are well documented, including the treatment or prevention of infection, inflammation, heart palpitations, and angina 30. After the 16th century conquest of Central America by Spain, Cortes introduced cacao to Europe, where it was typically viewed as a healthy and nutritious beverage. Today, although cocoa and chocolate are still widely consumed as beverages 31, they are most commonly consumed as confectioneries. Concerning confectioneries, concern regarding the fat content of chocolate often overshadows its potential value as a source of beneficial nutrients 32.

Numerous investigators are currently studying the biologic effects of cocoa and its flavonoids and oligomers components. In-vitro, it has been reported that cocoa, and isolated cocoa flavanols and their oligomers have the following actions. They can increase the antioxidant capacity of solutions and slow the oxidation of LDL 33, 34, 35. They may also induce endothelium-dependent vessel relaxation 36. It was reported that cocoa procyanidins could increase the synthesis of the antithrombotic lipid prostacyclin 37. Cocoa polyphenols oligomers have been reported to protect against peroxynitrite-dependent oxidation and nitration reactions 38.

Cardiovascular Effects of Flavonoids:  Among the most intensively studied of general human disorders possibly affected by dietary flavonoids, preface cardiovascular disease research has revealed the following mechanisms under investigation in patients or normal subjects.

Decrease Risk of Atherosclerosis: Central to the pathogenesis of atherosclerosis is the oxidation of low-density lipoprotein (LDL). The chemical structure of flavonoids gives the compound free radical scavenging ability, which means flavonoids may have antioxidant effects 45, 46.

Reduce the Risk of Hypertension: The vascular actions of chocolate observed in this work could comprise the pathophysiologic background of the antihypertensive effect of chocolate in subjects with isolated systolic hypertension 47, 48.

Reduce Oxidative Stress: increase in plasma antioxidant capacity, and there was a neutral effect of chocolate on lipid peroxidation and oxidative stress, at least within the time frame and related signaling pathways in blood vessel cells 49.

Elevate Endothelial and Capillary Function: Cocoa and purified cocoa flavanols and procyanidins have been reported to attenuate the copper-mediated and endothelial cell-mediated oxidation of LDL to reduce the production of reactive oxygen species by activated leukocytes, to protect against erythrocyte hemolysis, and to inhibit ultraviolet C-induced DNA oxidation 52-54.

Modify Blood Lipid Levels: Reported that cocoa procyanidins can increase the synthesis of the antithrombotic lipid prostacyclin while reducing the production of the pro-inflammatory cysteinyl leukotrienes. Cocoa polyphenol oligomers have been reported to protect against peroxynitrite-dependent oxidation and nitration reactions 52. Regulate glucose and carbohydrate metabolism 55.

CONCLUSION: There is now a large body of information that supports the idea that cocoa flavanols and procyanidins can act as antioxidants. These nutrients affect numerous intracellular signaling cascades and to influence the cardio-vascular system by enhancing vascular function and decreasing platelet reactivity. Some in-vivo studies have provided strong support for the hypothesis that the consumption of flavanol-rich food, such as cocoas and chocolates, may be related to reduced risk for vascular disease. Despite the enormous interest in flavonoids as potential protective agents against the development of human disease. In our view, greater attention should be given to the biological effects of these compounds and their metabolites within the GI tract and to any possible effects on other tissues of flavonoid metabolites. Flavonoid- rich dark chocolate improves endothelium-dependent vaso-dilatation. This effect is associated with increased plasma epicatechin concentrations in healthy adults, though it is possible that flavonoids are a marker for some other bioactive constituent of chocolate.

ACKNOWLEDGEMENT: I thank all the authors of various articles who have helped me gather all the various information