ABSTRACT: Ajuga chamaepitys (L.) Schreb, well-known as Camaepitiumor Ground Pine, is an annual herb typical of the Mediterranean area accounting several uses in the traditional medicine. In this study, the methanol extract of Ajuga chamaepitys (L.) Schreb was analyzed using Gas Chromatography-Mass Spectrometry (GC-MS), while the mass spectra of the compounds found in the extract were matched with the National Institute of Standards and Technology Library. The study revealed the presence of fifteen phytocomponents. The most abundant compounds in the methanol extract were eucalyptol, thujone, endoborneol, davana ether, and octacosane. The results indicated that polarity of the solvents used in extraction influenced the relative abundance and type of compounds extracted. The various compounds identified are known to have varying bioactivities such as being hemorrhoids, stomachache, jaundice, and inflammatory diseases.

INTRODUCTION: Ajuga chamaepitys (L.) Schreb (Lamiaceae, subfamily Ajugoideae) Fig. 1, also known as Ground Pine or Camaepitium, is a grayish-green annual or biannual forb, 5-30 cm tall, with the quadrangular ascending stem. Leaves are opposite, densely appressed, usually tripartite. Flowers, long up to 15 mm, are from 1 to 2 brought to leaf axils, with a yellow corolla, more rarely to red-brown, in any case, provided with two lips. The fruit contains four small nuts. The leaves are hairy, much divided and three-lobed; the branched stems are often fitted hairy at the base. When crushed, the plant gives off a characteristic smell of pine. Furthermore, it resembles a pine seedling, hence the common name ‘Ground Pine.’ A. chamaepitys was exploited for its resins and were also well known to Tudor herbalists 1.

This plant has long been used as a diuretic, tonic, emmenagogue agent and menser remover, and for wound-healing and perspiration 2. Applications of this species to treat scorpion and snake bites, hemorrhoids, stomachache, jaundice, inflammatory diseases, such as gout and joint pains, and common colds have also been well documented 3, 4. Antimicrobial, antiviral and anti-feedant and cytotoxic properties of various extracts of this plant have been reported 5, 6, 7, 8.

Herbal medicine, as a major part of traditional medicine, has been used in medical practice since antiquity and is a common element of Ayurvedic, homeopathic, and naturopathic medicine. World health organization notes that 74% of the plant-derived medicines are used in modern medicine, in a way that their modern application directly correlates with their traditional use as herbal medicines by native cultures 9, 10. Knowledge of the chemical constituents of Ajuga chamaepitys (L.) Schreb is desirable not only for the discovery of therapeutic agents but also because such information may be of great value in disclosing new sources of economic phytocompounds for the synthesis of complex chemical substances and for discovering the actual significance of folkloric remedies. Hence, a thorough validation of the herbal drugs has emerged as a new branch of science emphasizing and prioritizing the standardization of the natural drugs and products because several of the phytochemicals has the complementary and overlapping mechanism of action. Mass Spectrometry coupled with chromatographic separations such as Gas Chromatography (GC-MS) is normally used for direct analysis of components existing in traditional medicines and medicinal plants. In this study, the fifteen chemical content of the aerial part of the plant was tried to be determined by GS-MS method. 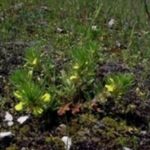 Extraction Procedure: Ajuga chamaepitys (L.) Schreb wase collected from Cigri village (Afyonkarahisar province, Turkey) in June 2017. A voucher specimen was deposited at Faculty of Pharmacy in Ataturk University, The air-dried and powdered aerial parts of the plant were extracted three times with methanol in the mantle heater at 40 °C (3× 1L). After filtration, 1 μl of this solution was employed for GC-MS analysis.

Identification of Components: Identification was based on the molecular structure, molecular mass, and calculated fragments. Interpretation of mass spectrum GC-MS was conducted using the database on National Institute Standard and Technology having more than 62,000 patterns. The name, molecular weight, and structure of the components of the test materials were ascertained. The relative percentage amount of each component was calculated by comparing its average peak area to the total areas. The spectrum of the unknown component was compared with the spectrum of the component stored in the National Institute of Standards and Technology Library Version (2005), Software, Turbomass 5.2.

GC-MS Analysis: The more precise information in qualitative analysis can be obtained by GC-MS. For quantitative determination, gas chromatography with flame ionization detector (GC-FID) and GC-MS are preferred. GC-MS is one of the best techniques to identify the constituents of volatile matter, long chain, branched chain hydrocarbons, alcohols, acids, esters etc. The GC-MS analysis of Ajuga chamaepitys (L.) Schreb extract revealed the presence of fifteen compounds (Phytochemical constituents) that could contribute to the medicinal quality of the plant. The identification of the phytochemical compounds was confirmed based on the retention time, molecular formula and mass spectrum. The major phytochemical constituent’s present in methanolic extract of Ajuga chamaepitys (L.) Schreb is presented as compound chromatogram is in Fig. 2. 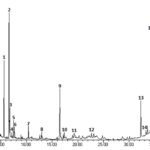 Eucalyptol (1,8 cineole) is an essential oil present in large amounts in a variety of plants which is frequently used in the manufacture of cosmetics, to increase percutaneous penetration of drugs, as a nasal decongestant and anti-cough agent, in aromatherapy, and dentistry 11, 12. Eucalyptol has been used to treat bronchitis, sinusitis and chronic rhinitis and also for the treatment of asthma 13. These actions seem to be related to an anti-inflammatory action 14 inhibiting the production of tumor necrosis factor alpha 15. Thujone, a monoterpene ketone, is present in variable amounts in a large number of plants and consequently, it is a significant component in many dietary botanical supplements and herbal medicinal products. Thujone has been regarded as a severe neurotoxicant, mainly based on past notoriety of the once-popular drink absinthe, although recently differing views have been expressed 16.

Camphor was a component of paregoric, an opium/ camphor tincture developed in the 18th century. Paregoric was used in various formulations for hundreds of years. It was a household remedy in the 18th and 19th centuries when it was widely used to control diarrhea in adults and children, as an expectorant and cough medicine, to calm fretful children, and to rub on the gums to counteract the pain from teething. Its use declined in the 20th century after the regulation of opium. Camphor has been used in traditional medicine from time immemorial in countries where it was native. It was probably the odor of the substance and its decongestant effect that led to its use in medicine 17.Phthalic acid and phthalate derivatives are major industrial materials used to manufacture plastic products like toys and bottles, also being widely used as plasticizers, adhesives, films, polymers, etc.

However, some studies revealed that these compounds could affect the male reproductive systems producing testicular atrophy 18 and alter the normal development of fetuses in pregnant rats 19. In view of these adverse effects on living beings, the US Environmental Protection Agency (EPA) classified the phthalic acid and some industrial phthalates as prioritypollutants20 and so, for example, the maximum admissible content in water for a common phthalic acid derivative such as the phthalic acid dibutyl ester was established in 6 g/dm.

CONCLUSION: The source of many plants can often be identified from the peak pattern of the chromatograms obtained directly from GC-MS analysis. The technique of fingerprint could identify false herbal products. The construction of the chromatographic fingerprints aims at evaluating the quality of herbal medicines. The fundamental reason of quality control of herbal medicines is based on the concept of phytoequivalence of herbs, and then to use this conception to identify the real herbal medicine and the false one, and further to do quality control. The importance of the study is due to the biological activity of some of these compounds. The present study, which reveals the presence of components in Ajuga chamaepitys (L.) Schreb suggests that the contribution of these compounds on the pharmacological activity should be evaluated.