ABSTRACT: The genus Ruellia L. is sometimes called Dipteracanthus, it comprises about 150 species native to tropical and temperate North and South America.  In this review, the literature data on phytochemical and biological investigations of the genus Ruellia are compiled. The well-recognized groups of secondary metabolites were flavonoids, lignans, coumarins, alkaloids, triterpenes, sterols, phenolic glycosides, phenylethanoids, megastigmane glycosides, benzoxazinoid glucosides, and others. The extract of this genus as well as pure compounds isolated from it have been demonstrated to possess multiple pharmacological activities such as wound healing, cardio-vascular, anti-hyperglycemic, antioxidant, antimicrobial, antibacterial, anticancer, antinociceptive, anti-inflammatory, cytotoxic and gastro-protective activities, purgative and angiotensin-converting enzyme-inhibitory effects, estrogenic and cholinergic properties and anti-fertility action.

INTRODUCTION: The family Acanthaceae (Acanthus family) is a large plant family, includes about 250 genera with almost 2500 species mostly found in hot countries, tropical and subtropical regions of the world, and also found in Mediterranean regions, Australia and USA 1-4. Some species of the family Acanthaceae are used in folk medicine to treat several diseases, especially gastrointestinal ailments 5.

Some plants are used as purgative, emetic, in childbirth to relieve pain, food stuff, and diuretic, 2, 6, 7 antidysentric, galactagogue and antidote for snake-bite, while being used externally as a poultice in rheumatism 2, 6. The genus Ruellia L. is sometimes called Dipteracanthus; it comprises about 150 species native to tropical and temperate North and South America. Some species of genus Ruellia are used medicinally to treat gonorrhea, syphilis, eye sores and in renal infections 7-9. Economically, many members of the family Acanthaceae are used in blue and yellow dye manufacture 10.

Chemical Constituents: The chemical constituents of genus Ruellia include flavonoids, lignans, coumarins, alkaloids, triterpenes, sterols, phenolic glycosides, phenyl ethanoids, megastigmane glycosides, β-Sitosterolglucoside, and others. Their structures, 1 - 70 are shown below, and their names and the corresponding plant sources are collected in Table 1 and Fig. 1. As can been seen, flavonoid glycosides are the predominant constituents within the genus Ruellia.

Triterpenes: Four triterpenes (6-9) were isolated from the genus Ruellia 13-15, 19, 20. Most of the triterpenoids are pentacyclic, in addition to one tetracyclic triterpenoid was found in from R. tuberose 20.

Flavonoids: Flavonoids are the predominant secondary metabolites of Ruellia. 27 compounds, 14-37, were obtained from the genus Ruellia 14-17, 19, 22-24. Apigenin, luteolin, pectolaringenin, demethoxycentaureidin, and nepetin and their glycosides are the most common flavones isolated from plants of the genus Ruellia. Chalcone and flavonols quercetin and quercetin 3-O-glucoside were obtained from R. brittoniana 14.

Phenyl Ethanoids: Structurally, they are characterized by (hydroxyphenyl) ethyl moieties, and a p-caffeoyl groups attached to C-1’, and C-4’ and C-6’ of the glucose moiety through glycoside and ester linkages, respectively. Rhamnose may also be attached to the glucose residue. Twelve phenylethanoids, 50-61, were found in the genus Ruellia 16, 17, 24. 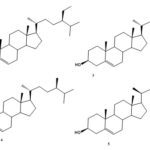 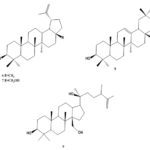 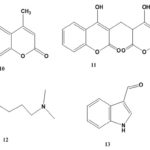 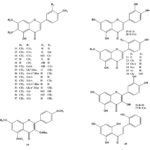 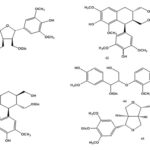 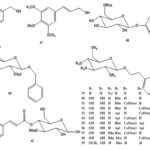 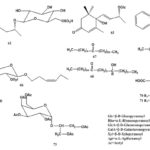 FIG. 1: STRUCTURES OF THE ISOLATED COMPOUNDS FROM GENUS REULLIA

Biological Activities: Reviewing the available literature about the genus Ruellia showed that it had the following biological activities:

Antioxidant Activity: 50% Hydroethanolic leaf extracts of R. tuberosa and Dipteracanthuspatulus at 500 mg/kg body weight possessed antioxidant activity 32, 33. Ethyl acetate and chloroform fractions of the stem of R. tuberosa possessed potent antioxidant activity compared with methanolic extract and aqueous and n-hexane fractions, which was investigated by the 2,2-diphenyl-1-picrylhydrazyl (DPPH) free radical scavenging assay and the hydrogen peroxide-induced luminal chemiluminescence assay 35. Compound 36 showed noticeable DPPH radical scavenging activities (with IC50 value of 14.3 ± 1.10 µM), while compounds 40, 41, 46 and 50 exhibited a moderate activity (with an IC50 value of 37.5 ± 2.20, 31.9 ± 3.35, 31.7 ± 2.47 and 19.4 ± 2.59 µM, respectively). On the other hand, EtOAC fraction of R. patula displayed activity with IC50 25.5 ± 2.29 µg/ml compared with the standard trolox 16.7 ± 1.86. 36

Cytotoxicity: Compounds 14 and 15, which were isolated from R. tuberosa showed cytotoxicity in-vitro against KB cell line with the dose of 30.05 and 17.91 μg/ml, respectively, while cirsimarin was cytotoxic against HepG2 cell line with an IC50 value of 38.83 μg/ml.19

Methanolic extract of aerial part of R. tuberose possessed cytotoxicity. The minimum inhibitory concentration (IC50) for methanolic extract was found to be 3.5 and 1.9 μg/ml in H460 and MDA-MB231 cancer cells, respectively 37. Methanolic extract, n-hexane and EtOAc fractions of R patula, and MeOH extract, n-hexane and EtO Acfractions of R. tuberose exhibited significant cytotoxic activity at a concentration of 100μM (μg/ml) against human lung cancer cell lines A459, as compared with the positive control, doxorubicin 36.

Gastroprotective Activity: Aqueous extract of R. tuberose roots showed a dose-dependent and robust gastroprotective activity in an alcohol-induced gastric lesion model of rats. The extract also had mild erythropoietic and moderate analgesic activities and was well tolerated even with subchronic treatment 40.

Purgative Effect: The methanol, ethyl acetate and aqueous extracts of R. praetermissa initiated spontaneous contractions in the quiescent and increased contraction on the electrically stimulated ileal strip at a concentration of 30 µg/ml.  The extracts produced concentration-related contractions both in amplitude and tone up till 750 µg/ml with IC50 of 360 µg/ml (methanol extract), 425 µg/ml (ethyl acetate extract) and 540 µg/ml (aqueous extract) 41.

Estrogenic and Cholinergic Properties: R. praetermissa possessed direct influence on the uterine physiology during gestation in rats. The plant extract appears to activate the myometrial cells membrane muscarinic receptors resulting in a uterotonic effect by a mode of action possibly via the cholinergic system. The extract is possibly acting by facilitating the synthesis of endogenous estradiol which influences the stimulation of the growth of the uterine endometrium 43.

Anti-leishmanial Activity: It was found that n-hexane fraction of R. tuberosa showed weak inhibitory activity at 100 µg/ml, as compared with the positive control, amphotericin B 36.

CONCLUSION: The genus Ruellia is widespread all over the world, and many species of this genus have been used in traditional folk medicine. Phytochemical investigations of Ruellia species have revealed that many components from this genus exhibit significant biological and pharmacological activities. The typical constituents of this genus are flavonoids, lignans, and phenylethanoids. Although there are 250 species in this genus, only a few species have been investigated so far. Further phytochemical and biological studies should be carried out on this genus to elucidate their active principles and mechanisms of action of the active constituents.