ABSTRACT: In the present study, an attempt was made to evaluate the changes in testis protein and metabolic enzyme activities induced by epichlorohydrin (ECH), twenty-four albino male rats were divided randomly into four groups of six rats each. One group was left untreated as controls, and the other three groups were administered, respectively, for twelve consecutive weeks, (2) 50 mg of ECH /kg/b.wt, (3) 75 mg of ECH /kg/b.wt and (4) 100 mg of ECH /kg/b.wt. In comparison with the control group, the doses of ECH (75 mg/kg/b.wt and 100 mg/kg/b.wt) resulted in lower protein levels and higher lactate dehydrogenase (LDH) activities in the testis of male rats than in control rats. The activity of gamma-glutamyl transpeptidase (γ-GT) decreased significantly at the doses of ECH (75 mg/kg/b.wt and 100 mg/kg/ b.wt) group than in the ECH (50 mg/kg/b.wt) and control group. However, a significant reduction in the activities of Na+/K+- , Mg2+-and Ca2+-ATPases in the (75 mg/kg/b.wt and 100 mg/kg/b.wt) ECH treated animals than control rats. Therefore, these changes in testis protein and spermatogenesis-dependent enzymes undoubtedly affect the physiological functions of the testis, which may thereby cause low sperm motility.

INTRODUCTION: Increasing attention to recent trends in declining reproductive health, especially the alarming decrease in male fertility rate worldwide, has led to the 21st century being dubbed the century of reproductive health 1. Epichlorohydrin does not occur naturally in the environment. It is manufactured commercially from chlorine and propylene, or hydrochloric acid and natural glycerine derived from biodiesel.

It is also used in the manufacture of elastomers, glycidyl ethers, cross-linked food starch, wet strength resins for the paper industry, water-treatment resins, surfactants, ion-exchange resins, plasticizers, dyestuffs, pharmaceutical products, oil emulsifiers, lubricants and adhesives 2. Epichlorohydrin is absorbed rapidly via the skin, gastrointestinal tract, and, in vapor form, via the lungs.  It is distributed widely throughout the body. In rats, most absorbed epichlorohydrin is metabolized rapidly, partly to carbon dioxide, which is excreted via the lungs, and partly to urinary metabolites, mainly conjugates 2.

Protein and metabolic enzymes, such as lactate dehydrogenase (LDH) and adenosine triphosphatases (ATPases), are important for the normal function and development of the testis and sperm motility 14-17. In the present study, we investigated changes in total protein and spermatogenesis-dependent enzymes in the testis to explore possible pathways of decreased sperm motility and altered levels of serum testosterone induced by ECH 18.

Assay of Protein and Enzymes Activities in Testis: After twelve weeks, the experimental rats were sacrificed by cervical dislocation, and the right tests were quickly collected, weighed, and then homogenized with 1:9 (w/v) 0.9% saline solution at 0- 4 °C. Total protein content and the activity of the gamma-glutamyl transpeptidase (γ-GT), lactate dehydrogenase (LDH), and ion-activated adenosine triphosphatases (ATPases) in testis tissues were determined by Vivek laboratories, Nagarkovil, Tamil Nadu, India and with the enzyme reagent kit provided by the Nanjing Jianchen Biological Institute, China.

Effect of ECH on Testis Protein Metabolism of Male Rats: Earlier studies have reported that a dose-dependent decrease in protein level in the spermatozoa and reproductive organs of ECH-treated animals 14, 17, 20-24. In this study, the total protein levels in the testis of male rats were significantly (P<0.05) decreased in the ECH (75 mg/kg/b.wt) Group after 12 weeks of ECH treatment when compared to control rats. The mean total protein content over the entire 12-week period was slightly lower in the ECH (50 mg/kg/b.wt) group but was drastically (P<0.05) decreased in the ECH (100 mg/kg/b.wt) groups. These results clearly suggest that the ECH leads to lower testis protein content than the control group. 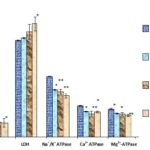 Gamma-glutamyl transpeptidase (Gamma-glutamyltransferase, γ-GT), is the key enzyme in the γ-Glutamyl cycle, and plays a vital role in the absorption, transport, and synthesis of amino acids and proteins 25. The activity of γ-GT decreased significantly (P<0.05) in ram semen with ingestion of 20 to 200 μmol NaF/L has been reported 17. In the present study, γ-GT activity in the ECH group decreased significantly in the (75 mg/kg/b.wt) treated group and then dramatically (P<0.05) decreased in the (100 mg/kg/b.wt) treated group when compared to control rats. Nevertheless, it can be concluded that both protein metabolism and synthesis in testis of male rats is affected by ECH (75 mg/kg/b.wt + 100 mg/kg/b.wt) treated rats and the influence of ECH on the γ-glutamyl cycle may be responsible for a reduction in testis protein of male rats. The reduction in testis proteins may also be due to the interference of ECH with the binding of the aminoacyl-t-RNA adducts to the ribosomal RNA template, which would then inhibit biosynthesis of protein in testis 14.

Effect of ECH on Testis Metabolic Enzyme Activities of Male Rats: Lactate dehydrogenase (LDH) and ion-activated adenosine triphosphatases (ATPases) are important for spermatogenesis and testicular metabolism 15, 16. Many studies have indicated that the activity of these enzymes decreases in testes of ECH-treated animals 14, 17, 20. In our study, LDH activities increased in the ECH (75 mg/kg/b.wt + 100 mg/kg/b.wt) treated groups for 12 weeks. These results are in accord with those obtained by Zakrzewski et al., 17 when they went from lower to higher concentrations of ECH in treating rat sperm samples 23. Furthermore, the mean values for the entire 12-week period were significantly (P<0.05) increased in the three treatment groups when compared to control rats. These findings indicate that the interaction of ECH can result in higher LDH activity than control animals.

On the other hand, our observations over time show that the activities of Na+/K+- ATPase, Ca2+-ATPase, and Mg2+-ATPase at week 12 in the three treatment groups all decreased significantly (P<0.05) as compared to control rats.  It has been reported that the toxic effect of ECH on reproduction is due to the inhibition of many enzymes, particularly those whose cofactor is the cation of a bivalent metal 18. It is likely, therefore, that some of the deceased enzyme activity found in the present study is the result of damaged testis tissue 26. However, others have reported that a lower dose ECH can increase enzymes activity by a positive feedback mechanism 23. Alternatively, the changes in testis metabolic enzyme activities of male rats may be related to both the dose and duration of ECH intoxication. Likewise, ECH, which are in-vivo metabolic products of alkylating agent/ chlorinated hydrocarbon inhalation, can inhibit or activate the activity of certain enzymes by inducing the production of free radicals 27. In any case, it is evident that with exposure to ECH various types of lesions were likely to result. It should be noted, however, that LDH, which is regarded as a marker of carbohydrate metabolism of germ-cell production and differentiation 15 plays a key role in the process of energy supplementation for spermatozoa motility 17.

CONCLUSION: ATPases, including Na+/K+-, Ca2+-, and Mg2+-ATPase, play a key role in the exchange of metabolites between Sertoli and developing germ cells and are markers of the metabolic state of germinal epithelium 28. The changes in these enzymes will undoubtedly affect physiological function in the testis, which may cause a significant decline in sperm motility 10. Nevertheless, the exact alterations in testis physiological function caused by ECH are not clear, and histological and ultra-structural studies are called for to illuminate this aspect. In conclusion, both ECH treatments alter testis protein and the activity of some enzymes in male rats, and these changes may be one of the pathways that lead to low sperm motility.

ACKNOWLEDGEMENT: Authors are wishing to thank the Management of J. J. College of Arts and Science, Pudukottai for providing the facilities.