CALOTROPIS GIGANTEA: A REVIEW ON ITS PHYTOCHEMICAL & PHARMACOLOGICAL PROFILE

CALOTROPIS GIGANTEA: A REVIEW ON ITS PHYTOCHEMICAL & PHARMACOLOGICAL PROFILE

INTRODUCTION: This plant is distributed throughout India. It is popularly known as arka in Hindi. India being a tropical country is blessed with the best natural resources and ancient knowledge for its judicious utilization. However, to make these remedies acceptable to modern medicine, there is a need to scientifically evaluate them to identify the active principles and understand the pharmacological action 1. Humankind first utilized material found in the environment on an empirical basis to cure various ailments. Natural products from plants and animals traditionally have provided the pharmaceutical industry with one of its important sources of lead compounds in search of new drugs and medicines.

The search for new pharmacologically active agents from natural resources such as plants, animals, and microbes led to the discovery of many clinically useful drugs 2.

Therapeutic Uses: The plant is purgative, anthelmintic, alexipharmic, cures leprosy, leucoderma, ulcers, tumors, piles, diseases of the spleen, the liver, and the abdomen; the juice is anthelmintic and leucoderma, tumors, ascites, diseases of the abdomen. The leaves are applied to paralyzed parts, painful joints, swellings; heal wounds. The tincture from the leaves used as antiperiodic in cases of intermittent fevers 3, 4. 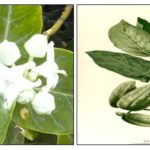 Phytochemistry: Phytochemically the plants have been investigated for cardenolides from the latex and leaves, 9, 10 triterpenoids, 10 anthocyanins from flowers 11 and hydrocarbons 12. The leaves and latex of Calotropis gigantea were found to have cardiac glycosides, various glycosides were isolated and studies 13. An active principle ‘mudarine’ was isolated from leaves of C. gigantean. Beside this, a yellow bitter acid and resin were also found. The cardiac glycosides were identified as Calotropogenjn (1), calotropin (2), Uscharin (3) and Calotoxin (4), Calactin (5) 10, 14. Three cardenolide glycosjdgs. Coroglaucigenn (6), frugoside (7), and 40 befaglucopyranosylfrugoside (8), were obtained as the cytotoxic principles of "akond mul" (roots of Calotropis gigontea  L.). The cytotoxicity of these compounds against various cell lines of human and mouse origin was tested. They showed similar cell line selectivity to those of cardiac glycosides such as digoxin and ouabain. They are toxic to cell lines of human origin, but not to those from mouse Two new oxypregnane-oligo-glycosides named calotroposides A (9) and (10) have been isolated from the root of C. gigantea, an Indonesian medicinal plant, and their chemical structures have been elucidated by chemical and spectroscopic methods micrograms/ml 15. Pal studied crystallization and properties of calotropin DI and DII from C. gigantean 16.

Giganticine, a novel non-protein amino acid, has been isolated from a methanol extract of the root bark of Catotropis gigantea and its structure established by spectroscopic methods. It exhibited significant antifeedant activity against nymphs of the desert locust Schistocerca gregaria 19. Two proteinases containing carbohydrate, called calotropin-FI and calotropin-FII, were purified from Calotropis gigantea latex by CM-Sephadex C-50 chromatography. Both calotropain-FI and Fll were found to homogeneous by chromatography 20. 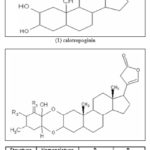 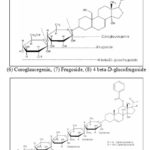 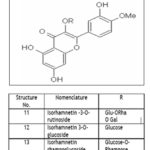 Based on the results of the present study it can be concluded that the extract of C. gigantea has potential antipyretic activity against both yeast-induced and TAB vaccine-induced fever, indicating the possibility of developing C. gigantea as a cheaper and potent antipyretic agent 22.

When administered during the pericum-early post-implantation period (i.e., Days 5-7 postcoitum at 250 mg/kg), most of the implantations showed signs of resorption 24.

They showed similar cell line selectivity to those of cardiac glycosides such as digoxin and ouabain: they are toxic to cell lines of human origin, but not to those from the mouse at 2 micrograms/ml 26.

The residual anti-inflammatory activity of alkaloid fraction of Calotropis gigantea suggests either a greater malic enzyme of a filarial worm Setaria digitata: some properties and effects of drugs and herbal extracts. Mitochondrial malate dehydro-genase (mMDH) and malic enzyme (mME) of a filarial worm Setaria digitata were studied. The leaf extracts of Ocimum sanctum, Lawsonia inermis and Calotropis gigantea and leaf and flower extracts of Azadirachta indica were, however, found to inhibit both mMDH and mME 32.