ABSTRACT: Hydroxycinnamic acids (HCA) and derivatives are well-known phenolic compounds ubiquitous in plants, showing relevant antioxidant properties as well as cytotoxicity toward several tumor cell lines. They can inhibit cell growth in a manner strongly dependent on their structural properties. Caffeic acid (CA) is one of the most widely distributed hydroxycinnamate and phenylpropanoid metabolites in plant tissues and agricultural wastes. Caffeic acid and its esters have a variety of biological activities, including antimicrobial, antioxidant, anti-inflammatory, anticancer, antiviral, anti-diabetic, anti-HIV, anti-influenza and antimalarial activities. In most cases, the synthesis of alkyl esters can significantly improve their function. This review is an overview of the available information about the chemical synthesis, anticancer and anti-inflammatory activities of caffeic acid esters. Considering the relevance of these compounds in human health, many of them have been the focus of reviews, taking as a center their obtaining from the plants. There are few revisions that compile the chemical synthesis methods, in this way, we consider that this review does an important contribution.

INTRODUCTION: Hydroxycinnamic acids (HCA) and derivatives are well-known phenolic compounds ubiquitous in plants, showing relevant antioxidant properties as well as cytotoxicity toward several tumor cell lines. They are able to inhibit cell growth in a manner strongly dependent on their structural properties 1. Caffeic acid 1(CA; 3,4-dihydroxycinnamic acid) Fig. 1 is one of the most widely distributed hydroxycinnamate and phenylpropanoid metabolites in plant tissues and agricultural wastes 2. CA, as a natural antioxidant, has received increasing attention with regard to its applications in the food, health, cosmetic and pharmaceutical industries because of its numerous biological activities, such as anti-mutagenic, anti-proliferative and anti-oxidant activities 3.

Moreover, it has been proved in many biological investigations that caffeic acid and its analogues also display anti-inflammatory 4, antimicrobial 5, anti-HIV 6, anti-influenza 7, antidiabetic 8 and antimalarial 9 activities. However, CA exhibits low solubility and stability in various solvent systems, thus it is necessary to enhance its practical applicability by improving its solubility 10.

The strategy of esterification of hydrophilic CA with lipophilic molecules, such as aliphatic alcohols, could be employed to alter its solubility in hydrophobic media 11. In addition, the synthesis of alkyl esters can significantly improve their function. For example, it was found that alkyl esters of CA have a higher antioxidant activity and lipophilicity than CA to protect neuronal PC12 cells against oxidative stress 12. Therefore, it is advantageous to synthesizе alkyl esters of caffeic acid based on both their biological function and potential application. There are many literature reports that address the different caffeate biological activities, much research remains to be done on this family of polyphenols, and new derivatives with potentially higher activity than natural or synthetic products reported can be obtained. This review intends to summarize the several synthetic methods, anticancer, and anti-inflammatory activities of these caffeic acid esters. 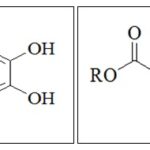 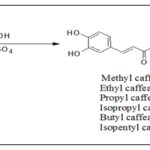 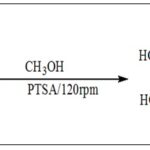 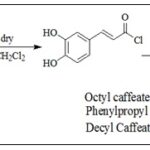 Reaction of Caffeic Acid and Halo Hydrocarbons: Some authors synthesized alkyl caffeates by nucleophilic displacement of a halogen atom from an alkyl halide in a basic medium from caffeic acid Scheme 4 23. 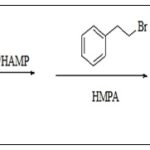 Wittig Reaction: Wittig reaction can be used to obtain esters. The most commonly used reagents are esters of α-haloacetic acid, which, by reaction with triphenylphosphine, produce the corresponding phosphonium salt. This phosphonium salt further reacts with benzoic acid in appropriate condition produce t-butylcaffeate Scheme 5 23, 24. 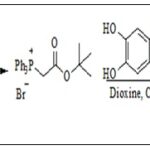 The malonic acid mono-esters obtained by saponification of the malonate di-esters in the presence of one equivalent of potassium hydroxide. Finally, by condensation reaction, prepared caffeic acid esters Scheme 6 25. 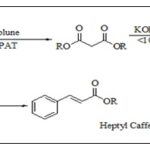 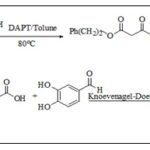 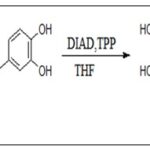 Wang et al., 31 improved this method in the microreactor in a short period of time (2.5 h) with a flow rate is 2 µL/min which kinetic constant, Km, was 16 times lower than that of a batch reactor. 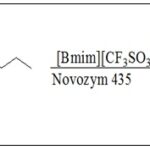 Researchers reported candida antarctica lipase B (Novozym435) had the scope to generate CAPE by catalytic esterification of caffeic acid and phenethyl alcohol Scheme 10 31, 33. 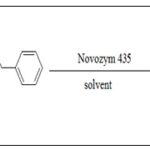 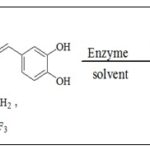 Anticancer Activity: Cancer is one of the world’s major risks to human health. Epidemiological studies had shown that eating various rich vegetables, fruit, and other natural foods could significantly reduce the risk of cancer in humans 35. CAPE was subsequently considered to be a potent anticancer component of propolis 36, and it was a natural anticancer drug with a good curative effect and with little side effect 37.

CAPE was an earlier confirmed antitumor component against general in vivo and in vitro neoplasm models, melanomas, lung and prostate cancers, and so on 38.

Research showed that CAPE in propolis had a great impact on melanoma, colorectal and gastric cancer cell lines 39. CAPE exhibited inhibitory effects on the motility and invasion of C6 glioma cells when tested with scratch assay and Boyden chamber assay.

The effect of CAPE on cholangiocarcinoma (CCH) growth both in vitro and in-vivo was also studied. It decreased the growth of a number of CCH cells but not of normal cholangiocytes.

Chiang found CAPE could significantly inhibit the growth of colorectal tumors in a mouse xenograft model. The mechanisms of action included modulation of PI3-K/Akt, AMPK, and m-TOR signaling cascades both in vitro and in-vivo 42.

In order to determine the degree of toxicity of these compounds towards healthy cells, experiments were also carried out in non-neoplastic cells-fibroblasts from human embryonic lung tissue (L-132).

All these esters showed stronger anti-proliferative activity than caffeic acid, and all the compounds except for20 and 21 showed the strongest activity toward colon26-L5 cell line.

This indicates that CAPE and its analogues possessed selective anti-proliferative activity toward colon 26-L5 cellline. Especially, the activities of compounds 20 and 26 (EC50: 0.02 and 0.02µM, respectively) were stronger than those of 5-fluorouracil (EC50:0.06 µM) and doxorubicin (EC50: 0.04 µM), which were used as positive controls.

Heterocyclic esters of caffeic acid were synthesized using Mitsunobu reaction. Those heterocyclic esters of caffeic acid 30-34 Table 1 were evaluated for their cytotoxic activity against HeLa, SK-OV-3, and HT-29 cancer cell lines. All compounds had good inhibitory activity (IC50 = 10-200 μM) against HeLa and HT-29 but they did not show significant inhibitory activity (IC50 > 100 μM) against SK-OV-3 29.

Anti-Inflammatory Activities: Caffeic acid has been shown to possess anti-inflammatory properties, since it inhibits 5- and 12 lipoxygenase activities, 46 in addition to inhibiting PKC, PKA and NF-kB activation induced by ceramides in U937 cells 47. These anti-inflammatory actions extend to some of the caffeic acid derivatives.

Da Cunha et al., 54 studied in vitro and in vivo effects of five caffeic acid derivatives (caffeic acid, methyl, ethyl, butyl, octyl and benzyl esters) and compared their actions to those of CAPE.

In the model of LPS-induced nitric oxide (NO) production in RAW 264.7 macrophages, the pre-incubation of all derivatives inhibited nitrite accumulation on the supernatant of stimulated cells, with mean IC50 (µM) values of 21.0, 12.0, 8.4, 2.4, 10.7 and 4.80 for methyl caffeate 2, ethyl caffeate 3, butyl caffeate 6, octyl caffeate 9, benzyl caffeate18and CAPE11, respectively (Table-3).

The effects of caffeic acid derivatives seem to be related to the scavenging of NO, as the compounds prevented SNAP-derived nitrite accumulation and decreased iNOS expression. Uwai et al., 19 examined the function of the ester functional group and the alkyl side chain (alcoholic part) and transformed caffeic acid to several derivatives. The inhibitory effect of these derivatives on NO production in murine macrophage RAW264. When the alkyl chain was C0–C11, the EC50 values of the caffeic acid esters decreased with the increasing length of the alkyl chain. In contrast, for esters with C6–C18 alkyl chains, their EC50 values were almost constant. Undecyl 57 and dodecyl 27 caffeate were most potent cytotoxic compounds Table 2. Isopropyl ester 5, with the same alkyl chain length as ethyl ester 3 and the same carbon number as propyl ester 4, showed a similar EC50 value to propyl ester 4.

A similar result was obtained in the case of Cyclohexyl 40 and benzyl 18 esters showed low cytotoxicity. These results suggested that the balance between lipophilicity and the size of the alcoholic moieties affected the cytotoxicity levels. However, prenyl 41, geranyl 42, and farnesyl 43 esters, which were anticipated to be lipophilic and cell membrane-philic relative to their corresponding straight chain esters, showed EC50 values 2 to 6 times higher than butyl 6, octyl  8, and dodecyl 27 caffeates, respectively.

CONCLUSION: In addition to extraction from natural sources, there are cheap and easy to make synthetic methods for obtaining caffeic acid esters. These methods, unlike the extractive ones, could provide enough quantity of caffeic acid derivatives for their multiple uses, besides guaranteeing the preservation of the plants as a natural resource. In this review, the alternatives for the synthetic obtaining of esters of caffeic acid by simple synthetic methods and their anticancer and anti-inflammatory activities are shown.

CONFLICTS OF INTEREST: The authors declare that they have no conflicts of interest.