ABSTRACT: Bi-layer tablets are developed to get immediate and sustained delivery of various drugs that have pre-defined release. In the past few decades, development in a combination of active pharmaceutical ingredients (API) in a single fixed dosage form has increased in the pharmaceutical industry, also promotes patient convenience and compliance. Bi-layer tablet plays a crucial role in the development of controlled release in order to give a successful drug delivery. Bi-layer tablets can be said to be a better option to reduce chemical incompatibilities taking place between Active Pharmaceutical Ingredients and to enable the development of various drug release profiles. Bi-layer tablet suits for sequential release of two drugs in combination or to incorporate two incompatible substances in same tablet. The bi-layer tablets are preparing by using different techniques such as OROS® push-pulls Technology, L-OROSTM Technology, EN SO TROL Techno-logy. This review article explains various techniques of bi-layer tablets and why the development and production of quality bi-layer tablets need to be carried out and basic challenges faced during the production of Bi-layer tablets. This review also describes the rationale for this combination therapy and the clinical trials that have demonstrated that these two agents can be combined without the loss of efficacy for either agent or an increase in the incidence of adverse events.

INTRODUCTION: Solid oral dosage forms are mostly preferred over other routes for many drugs and are still the most widely used formulations. The controlled-drug delivery systems typically require more demanding mechanical testing, characterization, and monitoring techniques with faster response times than those possible with traditional measurement approaches 1. Over 90% of the formulations manufactured today are ingested orally. It shows that this class of the formulation is the most popular worldwide, and the major attention of the researcher is in this direction.

The major aim of controlled drug delivery is to reduce the frequency of dosing 2. The objective of sustained release is to ensure safety and also to improve the efficacy of drugs and patient compliance. A bi-layer tablet is a fixed-dose combination (FDC) intended for oral application. It consists of two layers the first layer have immediate release part of single; the next layer is controlled release part of single or multiple actives.

They are called “Bi-layer tablets.” For the identification of two drugs, various colors were used. A bi-layer tablet is a very improved technique to overcome the single-layered tablet. Bi-layer tablets contain immediate, sustained release layers, and the immediate release layer delivers the initial dose. It includes super disintegrates, that increases the release rate of the drug and also attains the onset of action quickly.

Whereas sustained-release (maintenance dose) layer releases the drug in a sustained manner for a prolonged period of time by using various polymers as release in retardants. Diabetes, anti-hypertensive, antihistamines, analgesics, antipyretics, and antiallergenic agents are mainly suitable for this type of drug delivery 3. Bi-layer tablets have an advantage as compared to conventional monolayer tablets. These tablets are commonly used, so as there is less use of chemical incompatibilities of formulation components by physical separation. Moreover, bi-layer tablets have also enabled the development of controlled delivery of an API by combining slow-release with immediate-release layers. However, such drug delivery devices are complicated mechanically to manufacture and also difficult to judge their long term properties as they have poor mechanical and compression of the materials in the adjacent layers which is compacted, insufficient hardness, inaccurate individual mass control, reduced yield, cross-contamination between the layers and their potency to delaminate at the interface while on various stages of the compaction process. The major problem that has to be overcome is to find out in detail the sources of these problems at lower scales and to find out remedies to solve them. A major challenge is the lack of appropriate bonding at the interface between the adjacent compacted layers. When the compacted layers are beyond a certain limit, soft or hard, they might not bond appropriately with each other, and that can lead to compromised mechanical integrity. Challenges during development also include layer weight ratio,  establishing the order of layer sequence, first layer tamping force, elastic mismatch of the adjacent layers, and cross-contamination between layers 4, 5.

TABLE 1: VARIOUS ADVANCEMENTS IN THE FIELD OF BILAYER TABLETS 7

Cardiovascular disease (CVD) has a multi-factorial nature, and their risk factors accompany various different problems. The combination of risk factors like hypertension and dyslipidemia act synergistically, which in turn increases the risk of CVD events. This synergistic action is recognized by the major clinical guidelines currently to help in the management of patients with CVD or at risk of CVD, as they recommend a strategy of treating CVD risk factors simultaneously rather than in isolation. There is an increase in evidence describing the advantages of a combined / multi-factorial approach to reducing CV risk vs. the older sequential approach of treating risk factors individually. The driving forces for the development of such a bi-layer tablet were the poor level of control of CV risk factors, despite the widespread availability of efficacious anti-hypertensive and lipid-lowering mediations. A single tablet combination of antihypertensive and lipid-lowering medication may address some of the issues thought to hinder the management of CVD, such as poor adherence to multiple treatments due to high pill burden and the reluctance of physicians to manage more than one CV risk factor simultaneously.

The anti-hypertensive component(s) must also be free from drug-drug interactions with other BP-lowering medications due to the frequent need for multiple antihypertensive to achieve BP goals in certain difficult-to-treat populations, such as patients with diabetes. The antihypertensive amlodipine Besylate satisfies these criteria in that it has been demonstrated to reduce CV events in various patient populations and is effective when combined with other classes of antihypertensive. There are a number of important requirements for therapies used in combination medication, regardless of the condition being treated. Firstly, the medications must have the same dosing regimen. There should be no negative pharmacokinetic or pharmacodynamic interactions between the proposed components. Thirdly, from a patient’s perspective, the tablet should be of a reasonable size, and the formulations should allow flexible dosing 5, 6.

The Advantages of the Bi-layer Tablet Dosage Form are: 10

These requirements seem very obvious but are not very easy to observe in manufacturing a bi-layer tablet dosage form as there are several critical factors that are to be taken into consideration while manufacturing bi-layer tablets. Bi-layer tablets require fewer materials than compression coated tablets weigh less and maybe thinner. These tablets are manufactured where one layer of the drug is for immediate release while the second layer is for release of drug afterward, it can be as a second dose of an extended-release form 8.

The bi-layer tablets can also be produced, taking into account two incompatible drugs, which is done by compressing individual layers of each drug to reduce the area of contact between two layers. There are certain requirements to develop a proper tablet formulation, like sufficient mechanical strength and desired drug release profile must be met. This might be a tough task for a formulator to achieve these conditions, especially in bi-layer tablet formulation in which a double compression technique is involved, because of poor flow and compatibility characteristics of the drug. The compaction of the material involves compressibility and consolidation. 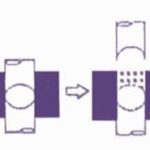 OROS® Push Pulls Technology: It includes two or three layers amongst which the one layer is essential of the drug, and the other layer is the push layer. The drug layer consists of drugs, along with two or more various agents.

So, this drug layer comprises of drug which is in poorly soluble form. Suspending agents and osmotic agents can also be added. A semi-permeable membrane surrounds the tablet core Fig. 2. 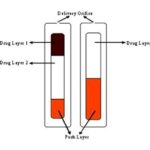 L-OROSTM Technology: This system used for the solubility issue Alza developed the L-OROS system where a lipid soft gel product containing drug in a dissolved state is initially manufactured and then coated with a barrier membrane, then osmotic push layer and then a semi-permeable membrane, drilled with an exit orifice Fig. 3. 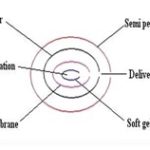 EN SO TROL Technology: Enhancement of solubility or to create an optimized dosage form uses an approach to drug delivery focusing on identification and incorporation of the identified enhancer into controlled release technologies.

DUROS Technology: This system is also called as “Miniature drug dispensing technology”. Its functioning resembles a miniature syringe that releases drugs in a continues and consistent manner in small concentrated form for a long period of time. Drug molecules are protected from enzyme with the help of cylindrical titanium alloy reservoir present outside having high impact strength.

Geminex Technology: With the help of this, the therapeutic efficacy of drugs can be increased greatly, also useful in minimizing side effects. This technology delivers one or more drugs with different release rates in a single dosage form. It is very useful both for the industry as well as patients. Geminex Technology actively applied by pen west in following areas – diabetes, cardiovascular diseases, cancer, and CNS disorders

Slow erosion or its breakdown into smaller particles allows it to leave the stomach. The bi-layer tablet might contain an immediate-release layer with the other layer as a conventional release.

Delamination: Tablet falls apart when the two halves of the tablet do not bond completely.

Third, the development of two compatible granulations is mandatory, which means more time spent on formulation development, analysis, and validation. 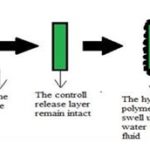 A maximum weight loss of not more than 1% of the weight of the tablets being tested during the friability test is considered generally acceptable, and any broken or smashed tablets are not picked up. Normally, when capping occurs, friability values are not calculated.

A thick tablet may have less tendency to cap whereas thin tablets of large diameter often show extensive capping, thus indicating that tablets with greater thickness have reduced internal stress the loss in the weight of the tablet is the measure of friability and is expressed in percentage as 20:

CONCLUSION: Bi-layer tablet is selected for sequential release of two drugs in combination or separate two substances which are incompatible, for sustained release tablet where one layer is immediate release and the second layer is the maintenance dose. Bi-layer tablets give an opportunity for producers to improve their products’ efficacy, and protect against impersonator products. Bi-layer tablet GMP requirements can differ widely. When a bi-layer tablet requires to be developed along with accurate weight control of the two layers, compression force-controlled presses are limited as to their insufficient sensitivity and thus lack of accuracy at low compression forces required to secure interlayer bonding.

Accurate individual layer weight monitoring/control at high speed and in combination with reduced layer separation risk can be achieved with the displacement weight control system based presses. A bi-layer tablet has been done with various or various combinations, which is useful for various ailments. Thus, bi-layer formulation is a convenient dosage form, safe and posses greater advantages to both patient and clinician that it may be administered as a single tablet once a day. Bi-layer tablet is quality, and GMP requirements can vary widely.