ABSTRACT: Mangiferin content in aqueous extracts of 30 varieties of Mangifera indica leaves collected from Gujarat state of Western India has been estimated during this study, using a simple reverse phase HPLC-DAD analysis method. The proposed method has been validated according to ICH guidelines in terms of linearity, accuracy, intraday and interday precision, limit of detection and limit of quantitation. The calibration graph was found to be linear over a concentration range of 20-120 µg/mL, with a regression coefficient of 0.9943. Determination of accuracy by standard addition method at three different concentration levels returned a mean recovery value of 97.64%. Average intraday and interday precision values were found to be less than 2%.

INTRODUCTION: Mangifera indica L. belongs to Anacardiaceae and is commonly designated as the “King of fruits.” It is an economically important fruit found throughout the world. Mango contains various classes of polyphenols, carotenoids, and ascorbic acid, which demonstrate different health-promoting properties, mainly from their antioxidant activities 1. The tree is large, spreading, evergreen, with a dense rounded or globular crown. The bark is thick, sometimes with longitudinal bursts containing a little yellowing, transparent gum resin like juice. The wood is reddish grey, often streaked, moderately hard, coarse-grained and soft in young trees and is readily eaten by insects. The tree has the power of healing the wounds by covering it with the rapid growth of the cork.

Leaves are useful in numerous ways masticating to tone up the gums. Ash of burnt leaves is used as a household remedy for burns. They are also used as vegetables in Java and the Philippines. Mango leaves contain mangiferin which is an expectorant for cough caused by bronchitis, and also helps in preventing asthma.

Mango leaves are the main material sources for mango cough drops. It is effective in reducing fever, functions in tonifying the heart, diuresis, anti-melancholy, anti-inflammatory. In addition, mango has also been used as traditional medicine i.e. a bark infusion used in Samoa for mouth infections in children, mango leaves used as a remedy for treatment of relapse sickness in Tonga 2, in India 3, unripe fruit taken as a remedy for exhaustion and heat stroke, half-ripe fruit used for a treatment of gastrointestinal disorders, bilious disorders, blood disorders and scurvy, fresh leaves for treatment of diabetes, dried seed ground into flour for treatment of diarrhea, and bark extract for treatment of diarrhea and throat disorders 4. The total number of distinct mango varieties cultivated in India has been variously estimated at 500 to 1000, out of which around 210 varieties are considered important. The most cultivated varieties of Gujarat are Kesar, Alphonso, Rajapuri, and Pairi.

Materials: Samples of M. indica leaf varieties were collected from Junagadh Agriculture University, Junagadh. The leaf samples were washed, shade dried for a day and then dried completely in an oven at 38 °C. The plant materials were coarsely powdered using a rotary grinder, sieved through BSS mesh 85, and stored in airtight plastic containers to be used for HPLC analysis. Mangiferin standard was procured from SIGMA, Bangalore, India (CAS no. 4773-96-0). HPLC grade acetonitrile and water were procured from Qualigens, Mumbai, India.

Extraction: Fine leaf powder (1 g) of each sample was weighed into an Erlenmeyer flask. Ethyl alcohol (25 ml) was added and the flask subjected to shaking for overnight extraction in an orbital shaker. The extract was filtered using Whatman No. 41 paper. The solvent was removed under reduced pressure, and the residue was reconstituted in HPLC grade water, making the total volume of 10 ml in a volumetric flask. Exactly 0.5 ml of this diluted extract was pipetted out into a 5 ml volumetric flask, and the volume was made up using HPLC grade water and used directly for HPLC analysis. All samples were filtered through a 0.45 μm Acrodisc syringe filter (Pall Corporation, Mumbai, India) before injection.

Preparation of Working Standards: Six concentration levels of mangiferin standard 20, 40, 60, 80, 100 and 120 μg/mL were prepared in HPLC grade water. These working standards were used for linearity study and preparation of calibration plot for quantization of mangiferin in the samples.

HPLC Analysis: HPLC analysis was carried out using a Shimadzu LC20AT series liquid Chromatograph equipped with a diode-array detector. The analytical column was a Phenomenex Luna C18 (250 × 4.6 lm; 5 μm) with a C18 guard column (Phenomenex, Torrence, CA). The mobile phase consisted of acetonitrile (solvent A) and 2% acetic acid in water (v/v) (solvent B). The flow rate was kept at 1.0 ml per min for a total run time of 30 min, and the gradient programme was as follows: 90% for 5 min, 90% B to 80% B in 16 min, 80% B to 0% B in 9 min and 0% B to 90% B in 5 min. A post-run of 10 min was set for reconditioning. The injection volume was 20 μl, and peaks were monitored at 254 nm. Peaks were identified by congruent retention times and UV spectra when compared with those of the standard. All samples were prepared and analyzed in duplicate.

RESULTS: Mangiferin is a phenolic compound and occurs in response to stress. It is abundant in mango leaves. The present study showed mangiferin ranged from 1 to 47 mg/g in thirty varieties of mango from Junagadh (table). Maximum mangiferin was recorded in Ladoo Fig. 2D followed by Jahangir Fig. 3D and the minimum amount was seen in Kaju Fig. 3F followed by Aambadi Fig. 3B.

TABLE 1: QUANTIFICATION OF MANGIFERIN EXTRACTED FROM 30 VARIETIES OF M. INDICA 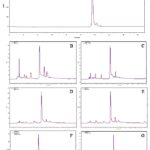 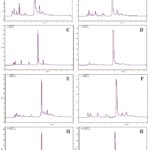 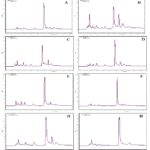 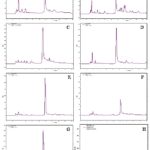 Other studies revealed antistress properties 16, anti-lipid peroxidation 17 and blood glucose control 18. In Cuba, the stem bark aqueous decoction is used as a nutritional supplement 19, and the standard aqueous extract is available in pharmaceutical formulations under the brand name Vimang and Salaretin 20. Mangiferin is highly distributed in higher plants. It can be found in many other plants like Coffea, Salacia chinensis and Anemarrhena asphodeloides 21.

Augustyn et al., (2011) compared mangiferin content present in mango leaf of three cultivars with that of honeybush (Cyclopia genistoides), an indigenous South African herbal tea used for its antioxidant property and other health benefits 24. Their results indicate that mango leaves may have more health benefits than honeybush tea. Jutiviboonsuk and Sardsaengjun, (2010) isolated mangiferin in three mango varieties cultivated in Thailand,  out of which Nam Doc Mai showed a high amount of mangiferin 25. In Coffea plants, localization of mangiferin is found in association with the photosynthetic tissue and also found accumulated at early stages of fruit formation. Franklin et al., (2009) reported the presence of mangiferin for its antioxidant and antimicrobial properties along with plant defense against biotic stress. Mangiferin is a glycoside (2-β-D-glucopyranosyl-1, 3, 6, 7- tetrahydroxyxanthen-9-one, is the major component of mango leaves, fruit, bark and so on 26. Studies have shown that mangiferin has anti-oxidant, anti-bacterial, anti-viral, immune regulation and anti-tumor activity.

CONCLUSION: The present study demonstrated that the leaves of thirty mango varieties were interesting sources of the pharmacologically active C-glycosyl xanthone, mangiferin. From the percentage amount of isolated mangiferin, variety Ladvo was a good source of mangiferin.