ASSESSMENT OF ANTIOXIDANT, ANTIBACTERIAL AND ANTHELMINTIC ACTIVITIES OF ETHANOL EXTRACT OF LEAVES OF CROTALARIA PALLIDA (AITON)

ASSESSMENT OF ANTIOXIDANT, ANTIBACTERIAL AND ANTHELMINTIC ACTIVITIES OF ETHANOL EXTRACT OF LEAVES OF CROTALARIA PALLIDA (AITON)

ABSTRACT: The ethanol leaves extract of Crotalaria pallida (Aiton) was evaluated to investigate the Phytochemical nature and some selected pharmacological activities. The plant extract indicated the presence of combined reducing sugar, tannins, flavonoids, glycosides, alkaloids and steroids. The extract showed free radical scavenging activity with an IC50 value of 37.60 µg/ml, and standard ascorbic acid showed IC50 value of 16.95µg/ml. The total phenolics content (TPC) was found to be 14 ± 0.015 mg GAE/g of dried plant extract. Total flavonoids content was found to be 20.42 ± 0.001 mg QE / 100 g of dry extract. The extract showed mild antibacterial activity against the bacterial strains Vibrio cholera, Shigella flexneri, Shigella dysenteriae, in comparison with standard drug kanamycin (30 µg/disc). In the anthelmintic test, the extract showed a dose-dependent decrease in paralysis time and death time of worm Paramphistomum cervi (trematoda) when compared with standard albendazole. These results espouse the traditional use of the leaves of this plant.

INTRODUCTION: For many years, plants are regarded as a puissance source of natural products especially as a source of viands and therapeutic agents for a vast range of ailments 1-2. Medicinal plants, containing versatile medicinal constituents, used in healthcare sectors and different parts of the world for a different therapeutic purpose, are a common application 3. In traditional uses, the leaves of C. pallida (Aiton) are used as the curative agent of urinary tract infections (UTI) and vermifuge 4. Moreover, the recent study has deciphered that it works as a potential HIV-1 protease inhibitor 5.

Oxidation is an imperative process for living organisms for different metabolic process. Usually, a tantamount of free radicals and antiradicals are produced in a normal physiologic system but when reactive oxygen species (ROS) are increased irrationally, incur oxidative damages, provoke biochemical changes and cause diseases. For instance, diabetes mellitus, aging, arthritis, inflammation and neurodegeneration, cancer and atherosclerosis 5-6.

Though many synthetic antioxidants have been established they are getting prohibited due to their toxic and carcinogenic comportment, and inquisition of novel antioxidant from plant parts has been started as it contains polyphenolics compounds, known properties of scavenging free radicals and can inhibit hydrolytic and oxidative enzymes 7. Anthelmintics may also be called vermifuges or vermicides 8.

Helminthiasis is one of the most important animal diseases, infringed upon the economy. The disease is highly rife especially in third world countries 9. Because of the easy availability and physical resemblance of this parasite (Paramphistomum cervi) with the parasite of human beings, the initial evaluation of anthelmintic compounds in vitro was performed.

Plants possess many antimicrobial properties as secondary metabolites for instances, alkaloids, phenolics compounds, etc. 10 The increasing case of drug-resistant of bacteria and reduced susceptibility of some strains to antibiotics raised the bacterial infections incurable and exhorted to the search for new antibacterial compounds in different plants 11-12.

Plant Material Collection: The leaves of C. pallida was collected from the Boyra, Khulna, Bangladesh in 23rd August 2012 at evening and identified by the experts of Bangladesh National Herbarium (Accession number 45236), Mirpur, Dhaka, Bangladesh. A voucher specimen has been deposited in Pharmacy Discipline, Khulna University, Khulna, Bangladesh.

Extraction: The collected leaves were separated from undesirable materials and then were washed with water. They were shade-dried for five weeks. The leaves were ground into fine powder by a suitable grinder. About 150 g of powdered material was taken in a clean glass container and soaked in 600 ml of 95% ethanol. The container was then sealed and kept for 14 days accompanying occasional stirring by a clean glass rode. The mixture then underwent a filtration process by a piece of clean, white cotton material. Then it was filtered through filter paper. The filtrate (Ethanol extract) obtained was then evaporated.

Phytochemical Screening: A small portion of the extract was taken for phytochemical screening 13-14.

Test Microorganisms: Six species of both gram positive and gram negative bacteria were used for the antibacterial test. The bacterial strains were collected from the microbiology lab of Khulna University, Khulna, Bangladesh. The bacterial strains were used for the investigation are Gram-negative (Escherichia coli, Shigella dysenteriae, Vibrio cholera, Shigella flexneri) and Gram-positive (Staphylococcus aureus, Streptococcus pyrogens).

Antioxidant Assay: The free radical-scavenging activity of C. pallida leaves extract was evaluated by assessing its discoloration of 2, 2-diphenyl-1picryl-hydroxyl radical (DPPH) in ethanol by a slightly modified method 15. The radical scavenging activity was calculated using the following formula:

Determination of Total Phenolics Content: The total phenolics content of C.pallida leaves was determined by Folin-ciocalteu assay. Briefly, a standard solution of Gallic acid (20, 40, 60, 80 µg/ml), and 0.0025 gm of the extract was dissolved in 25 ml of 80% ethanol and sonicated for 20 minutes. Then each concentration of both standard and extract was added 9 ml of distilled deionized water in each test tube. Then 1 ml of Folin-Ciocalteu was added and shaken properly. After 5 min later 10 ml of 7% of Na2CO3 was added. The volume was adjusted to 25ml by adding distilled water and kept in the dark for 30 min. After 30 min the UV absorbance was measured at 750 nm 16.

Anthelmintic Activity Test: The Anthelmintic activity was done on adult worm’ Paramphistoma cervi’ (trematoda) due to its Physiological resemblance with the intestine parasites of human beings. Seven groups of approximately equal size of six worms in each group were used for the present study. Three groups were prepared as control (i.e. 0.2% tween-80 in water), reference i.e standard albendazole (10, 15 mg/ml) and extracts (25, 50, 100, 200 mg/ml). This test was carried out with the slight modification of the original one 17. Observations were made for the time required for paralysis was noted when no movement could be observed. Death was concluded when the worms lost their motility followed with fading away of their body color.

Antibacterial Activity Test: Antibacterial activity was performed by disc diffusion method 18-19. This method, test sample was dissolved in solvents to give the concentration of the solution to 250 µg/disc, and 500 µg/disc and kanamycin (30 µg/disc) was used as a standard. The sterile Matricel (BBL, Cockeysville, USA) filter paper discs were placed with a known amount of test samples using micropipette and dried. The disk of sample, positive control and negative control are then kept in sterile Petri dishes (120 mm in diameter) containing agar medium dipped with the test organisms using sterile transfer loop. The plates are then kept at 40 ºC for facilitating maximum diffusion. The plates were then kept in an incubator for 12-18 h to allow the growth of the microorganisms. If the test material has any antibacterial activity, it will inhibit the growth of microorganism giving a clear, distinct zone called “zone of inhibition.” The antibacterial activity of the test agent is determined by measuring the diameter of the zone of inhibition in term of a millimeter and compared with the standard antibiotic.

DPPH Scavenging Activity: The leaves extract showed DPPH radical scavenging activity in a concentration-dependent manner. The IC50 value for the standard and extract was measured by the following equation chronologically, y = 44.51x - 4.718 and y = 41.79x - 15.83 respectively. Where y is 50 and x is the log concentration of IC50 value Fig. 1. The extract showed IC50 value of 37.60 µg/ml which is comparable to that value of standard ascorbic acid that showed IC50 value of 16.95 µg/ml. The test was done triplicates. 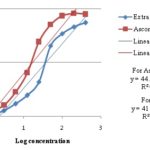 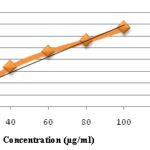 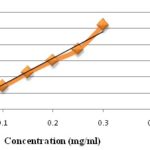 From the results Table 1, the Activity Index (AI) Table 2 were calculated using the following formula: 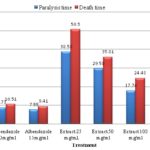 All Values represent Mean ± SD; n=6 in each group. Comparisons made between standard versus treated groups, P<0.001 was considered significant

DISCUSSION: The presence of the bioactive plant metabolites in phytochemical screening possesses antibacterial activity. For instances, tannins are known to be helpful in treating diarrhea and dysentery.

In DPPH activity, the antioxidants were able to reduce DPPH to yellow colored diphenyl picrylhydrazone 22. The method based on the reduction DPPH in alcoholic solution in the presence of a hydrogen donating antioxidant due to the formation of the nonradical form DPPH-H in the reaction. DPPH is usually used as a reagent to assess free radical and accepts an electron or hydrogen radical to become a stable diamagnetic molecule 23. The extract showed significant antioxidant activity compared to standard.

The antioxidative activities observed can be due to the different polyphenolics compounds that are, tocopherols, flavonoids and other organic acids. Many studies have shown polyphenols contribute significantly to the antioxidant activity 24. They act as highly effective free radical scavengers which are mainly due to their redox properties, which can play an important role in absorbing and neutralizing free radicals, quenching singlet and triplet oxygen or decomposing peroxides 25. The extract showed phenolics and flavonoids content that possess a wide range of activity including antibacterial, antioxidant and anti-allergic.

The antibacterial activity of C. pallida probably due to the presence of flavonoids that revealed in phytochemical studies. The zone of inhibition varies within the ranges of 7.5-10.5 mm and 9.5-14 mm at the dose of 250 µg/disc and 500 µg/disc respectively. The highest zone of inhibition was found against Shigella flexeneri (14 mm) at 500µg/disc. As it showed moderate activity against S. dysenteriae, S. flexneri, V. cholera, the results buttress the traditional use of this plant as a remedy of urinary disorder 3, while the ethanol root extract showed moderate activity against Staphylococcus aureus, Escherichia coli, Salmonella typhi, Pseudomonas aeruginosa 26.

Statistical Analysis: All measurements were repeated three times. The results are expressed as the mean values ± standard deviation. The results were statistically analyzed by ANOVA and Duncan’s multiple range tests. Statistical significance was set at p<0.001.

CONCLUSION: The present study showed that some significant phytochemical components present in the leaves extract of C. pallida that helps to exhibit a potent antioxidant activity and moderate antibacterial and anthelmintic activity which support the traditional uses. Further advanced inquisitions are suggested to elucidate the underlying mechanism as well as to asunder the bioactive compounds responsible for each pharmacological activity. This study has contributed to the validation of the medicinal potential of extracts of leaves of C. pallida.

ACKNOWLEDGEMENT: The authors are grateful to the head of the pharmacy discipline, Prof. Dr. Md. Golam Hoassain for permitting the lab facilities.