INTRODUCTION: Tecoma capensis (T. capensis) Thumb. (Bignoniaceae), commonly called a cape- honeysuckle, an evergreen and fast-growing scrambling shrub which may go up to 2-3 m high and spread more than 2.5 m. The plant loses its leaves in a colder climate.

It has pinnately compound leaves that have oval leaflets with blunt teeth. Flowers are orange in color, tubular and attracting nectar-feeding insects and birds. The bark infusion is used to treat sleeplessness to induce sleep 1 and also used as an analgesic, anti-inflammatory and antipyretic 2.

The leaves were used to treat pneumonia and intestinal trouble 3. The activities reported were antiulcer 4, anti-microbial 5 anti-pyretic 6, anti-inflammatory 7, 8, hepatoprotective 9 and cytotoxic 10. Phyto-constituents reported were different iridoid glucosides from the leaves 11. In this article author wants to explain the detailed antioxidant activity by three methods, antimicrobial activity against two gram +ve, two gram -ve and two fungal strains and anti-inflammatory activity by carrageenan-induced rat paw edema method which is not yet published.

Preparation of Plant Extract: Whole plants were thoroughly washed with water. The collected plants were cut into small pieces and dried under shade. The dried pieces were ground into fine powder by using a mixer grinder and extracted by maceration with ethanol for 7 days with occasional shaking and stirring. Then, the liquid was concentrated under vacuum with a rotary vacuum to get dried extract.

Animals: Anti-inflammatory activity experiment was carried out using 20 Albino rats of weight 200-250g male / female of age 12 weeks. All the experimental procedure and protocols used in this study are reviewed and approved by the Institutional Animal Ethical Committee (IAEC) of the Raghu College of pharmacy contributed by the guidelines of the CPCSEA, government of India (1549/PO/Re/S/2011/ CPCSEA).

All the rats were given a period of acclimatization for 14 days before starting the experiments. Rats were fed a pellet diet, and water ad libitam, temperature maintaining at 24 ± 2 °C and relative humidity 60-70%. These rats were divided into four different groups, each containing five animals; the animals were marked individually.

2,2-Diphenyl-1-Picrylhydrazyl (DPPH) Assay: 12 The free radical scavenging activity of ethanolic extract of Tecoma capensis was measured by DPPH (1, 1-diphenyl-2-picryl-hydrazil) employing the method described by Blois, 1958 with slight modification. 0.1 mM solution of DPPH in ethanol was prepared, and 1 ml of this solution was added to 3 ml of various concentrations (5, 10, 15, 20, 25, 30, 35, 40, 45, 50, μg/ml) of ethanolic extract. After 30 min, absorbance was measured at 517 nm. The percentage of inhibition was calculated by comparing the absorbance values of the control and test samples.  Ascorbic acid was used as a reference compound. The capability to scavenge the DPPH radical was calculated using the following equation:

Determination of Superoxide Radical Scavenging Activity: 14 Superoxide is biologically important as it can form singlet oxygen and hydroxyl radical. Overproduction of superoxide anion, radical contributes to redox imbalance and associated with harmful physiological consequences. Superoxide anion is generated in PMS-NADH system by the oxidation of NADH and assayed by the reduction of NBT resulting in the formation of blue formazan. 100 µl of Riboflavin solution [20 µg], 200 µl EDTA solution [12 mM], 200 µl methanol and 100 µl NBT (Nitro-blue tetrazolium) solution [0.1 mg] were mixed in a test tube, and the reaction mixture was diluted up to 3 ml with phosphate buffer [50 mM]. The absorbance of the solution was measured at 560 nm using phosphate buffer as blank after illumination for 5 min.

This is taken as control. 5, 10, 15, 20, 25, 30, 35, 40, 45, 50, μg/ml of different concentrations of extract, as well as standard preparation, were taken and diluted up to 100 µl with methanol. To each of these, 100 µl Riboflavin, 200 µl EDTA, 200 µl methanol and 100 µl NBT was mixed in test tubes and further diluted up to 3 ml with phosphate buffer. Absorbance was measured after illumination for 5 min. at 560 nm on UV visible spectrometer Shimadzu, UV-1601, Japan. The superoxide anion scavenging activity was calculated according to the following equation.

Antimicrobial Activity: 17 The agar disc diffusion method was used to evaluate the antibacterial potentiality of EETC against various gram +ve, gram -ve, and fungal strain. A 100 µl of freshly prepared inoculum was spread onto the surface of sterile Mueller Hinton agar using sterilized glass spreader. A sterile borer was used to prepare the cups of 8 mm diameter in the agar medium spread with micro-organism, and 0.1 ml of inoculums was spread on the agar plate by spread plate technique. Accurately measured (0.05m1) solution of each concentration and reference standard (ciprofloxacin 50 µg/ml and fluconazole 0.1 mg/ml) was added to the cups with a micropipette. All the plates were kept in a refrigerator at 2 °C to 8 °C for effective diffusion of test compounds and standards for 2 hours. Later, they were incubated at 37 °C for 24 hours. The presence of a definite zone of inhibition of any size around the cup indicated antibacterial activity. The solvent control (DMSO 4.0%, v/v) was run simultaneously, which was used as a vehicle. The diameter of the zone of inhibition was measured and recorded.

Acute Toxicity: The acute toxicity of Tecoma capensis was assessed by using up and down method 18. After the administration of one single dose of EETC (5, 50, 300, 2000 mg/kg) the survival of animals was observed during 24 h. If an animal survived at any given dose, the dose for the next animal was logarithmically increased; if it died, the dose was decreased.

Anti-inflammatory Activity: 19 Male or female Albino rats are starved overnight and grouped into five. To ensure uniform hydration, the rats receive pure drinking water. At the time of the experiment they were not allowed access to both feed and water. The rats are subjected to intraperitoneal injection of 0.05 ml of 1 % solution of carrageenan into the plantar side of the right hind paw.

The three groups of rats an hour post intraperitoneal (IP) administration were subjected to 100, 250 mg/kg of test extract and 20 mg of standard. The standard and test drug is dissolved or suspended in the same volume. The vernier calipers [RSK, Mumbai] was used to measure paw width and thickness before, and at 1st, 2nd, 3rd, 4th, 5th and 6th hour after an injection of carrageenan the paw volume was then calculated from the width (a) and thickness (b) measurement using the following Equation:

The percentage inhibition of paw edema was calculated for each group concerning its vehicle-treated control group by using the formula:

DPPH Scavenging Activity: The DPPH, stable radical has been widely used in the determination of primary antioxidant activity, i.e., the free radical activity of the pure antioxidant compound (standard) and the extract. The assay was based on the reduction of DPPH radicals in methanol, which causes decreasing absorbance at 517 nm.

Data are presented as mean ± SD 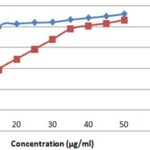 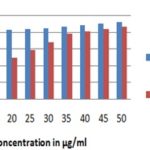 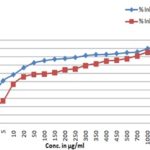 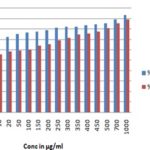 The scavenging effect increased with increasing with the increasing concentrations of the test compounds. The IC50 was calculated for the extract as well as standard and summarized in Table 1 and graphically represented in Fig. 1 and 2. The IC50 value of the extract by DPPH scavenging activity was 21 ± 0.06, and ascorbic acid was 12 ± 0.05, which was comparatively lower than the standard. It means ethanolic extract of Tecoma capensis at higher concentration captured more free radicals formed by DPPH resulting in a decrease in absorbance and the increase in IC50 value.

Hydroxyl Radical Scavenging Activity: The scavenging ability of EETC on hydrogen peroxide is shown in Fig. 3 and 4 and compared with ascorbic acid as standard. The EETC was capable of scavenging hydrogen peroxide in an amount dependent manner.  At a concentration of 1 mg/ml, the scavenging activity of the extract and the standard was found to be 87.49 ± 0.34268 and 90.05 ± 0.1743 respectively. The IC50 value of the extract was (12 ± 1.64) was found to be more effective in quenching the hydroxyl radicals produced in the reaction mixture. The hydroxyl radical can induce oxidative damage to DNA, lipids, and proteins. Thus removing the H2O2 is very important for antioxidant defense in a cell by various food materials like fruits, green leafy vegetables, etc. The hydroxyl radical scavenging ability of extract was determined by its ability to compete with deoxyribose for hydroxyl radical. The extract diminishes the chromogen formation by competing with deoxyribose. In this assay, 2-deoxy-2-ribose was oxidized when exposed to hydroxyl radicals generated by Fenton-type reaction. The oxidative degradation can be detected by heating the product with TBA under acidic conditions to develop a pink chromogen (thiobarbituric acid reactive species) with a maximum absorbance at 532 nm 21.

Superoxide Radical Scavenging Activity: Superoxide radical is one of the strongest ROS among the free radical and gets converted to other harmful reactive oxygen species such as hydrogen peroxide and hydroxyl radical damaging bio-molecules which result in chronic diseases 22. 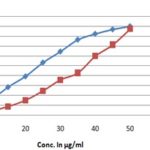 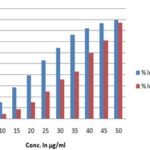 These radicals generated from dissolved oxygen by PMS-NADH coupling can be measured by their ability to reduce NBT. The decrease in absorbance at 560 nm with the plant extract (EETC) and the reference compound ascorbic acid indicates their abilities to quench superoxide radicals in the reaction mixture. The IC50 value of the extract is 37.02 ± 0.04, and the standard is 23 ± 1.04 respectively shown in Table 1 and Fig. 5 and 6.

Antimicrobial Activity: The antimicrobial activities of the plant extract (EETC) against four bacterial strains and two fungal strains were examined and assessed by the presence or absence of inhibition zones. The inhibition zones of the extract tested for antibacterial and antifungal activity are given in Table 2, 3 and Fig. 7, 8 shows potential gram +ve and gram-ve activity but very less antifungal activity. S. aureus causes infections including superficial skin lesion, localized abscesses, and food poisoning 23. B. subtilis causes meningitis, endocarditis, pneumonia, wound infection and lesions 24. E. coli are Gram-negative bacteria causing a severe type of food poisoning and also causes a liver abscess, infra abdominal obstetric and gynecologic. Enteropathogenic strains of E. coli cause acute diarrhoea in children below 2 years and may cause acute death due to the dehydration and electrolyte imbalance 25, and P. vulgaris causes wound infection and urinary tract infection 26. 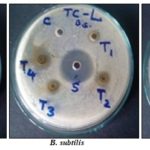 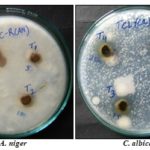 These infections can be treated with many standard drugs, but not all strains can be successfully treated by these drugs, further evaluation of this plant is needed. The extract shows moderate activity against microbes. This could be the beginning for further research on the screening approach by taking into consideration the extract preparation and the mechanism of action.

Anti-inflammatory Activity: Inflammation can be defined as a reaction of a living cell or tissue to injury, infection, irritation or infiltration. It is characterized by pain, swelling, redness and heat/ fever. Prostaglandins and leukotrienes are released by a host of mechanical, thermal, chemical, bacterial and other insults, and they contribute importantly to the signs and symptoms of inflammation 27.

EETC=Ethanolic extract of Tecoma capensis, each value is presented as Mean ± SD of three values 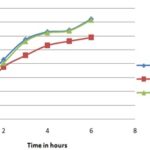 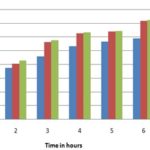 Mast cell which is very rich in histamine has membrane receptors both for a special class of antibody (IgE) and for complements components-C3a, and C5a mast cell can be activated to secrete inflammatory mediators through these receptors and also by direct physical damage. A transmembrane protein CD40 expressed on monocytes, neutrophils and platelets also play roles in inflammation 28. Our results clearly show the anti-inflammatory activity of the Tecoma capensis.

Generally, the effect of the ethanolic extract of Tecoma with inhibition ranging from 58.97 ± 0.11 to 71.73 ± 0.14, nearly equal to the standard Indomethacin. Mechanism possibly involved in this anti-inflammatory activity includes inhibition of the action of inhibitory mediators such as histamine, prostaglandins, nitric oxide, platelets activating factors and substance P, the effect on adreno corticoid hormone and immune suppression. This work is at present is limited to only animals; further clinical trials must require.

CONCLUSION: The results of the present study revealed that T. capensis extract possesses potent free radical scavenging ability, anti-inflammatory, and antimicrobial activity. The activity may be due to the presence of flavonoids, phenols, and tri-terpenoids. Further, we conclude that this plant can be used as a natural antioxidant, anti-inflammatory, and antimicrobial purpose.

ACKNOWLEDGEMENT: The authors are thankful for the management and staff members of the Raghu College of Pharmacy, Visakhapatnam for their constant support and providing me necessary facilities.