ABSTRACT: Honey is commonly used by the indigenous population in Brazil due to its large variety of physiological properties such as ulcers and dermatitis healing. The goal of this paper is to select and to test different types of Brazilian honey to be used associated with Aloe vera as an accessible wound treatment. Three types of honey were analyzed: two produced by Tetragonisca angustula in different regions of Brazil and one honey produced by Apis mellifera scutellata, associated with both water and Aloe vera. Quantitative assays, where bacterial growth curve was analyzed by optical density, were performed to test the antimicrobial activity of the samples. From the results obtained, we observed that the three types of honey studied presented a satisfactory antimicrobial activity. The association between honey and Aloe vera, besides demonstrating better antimicrobial action than each compound itself, it demonstrated better effectiveness against Enterobacteriaceae species (E. coli and S. typhimurium).

INTRODUCTION: Honey is one of the oldest medicinal substances of history. In ancient Egypt, honey was found in around 500 of the 900 drugs existing at that time 1, 2. The composition of honey depends on both the bee species and the plant’s nectar. Climatic conditions and beekeeper’s handling can also influence honey’s characteristics 3. Honey is composed of different sugars, mostly monosaccharides, and disaccharides. It also contain flavonoids 4, proteins, amino acids, enzymes, organic acids, minerals, pollen 2, 5, proteins, amino acids, enzymes, organic acids, minerals, pollen 5, 6 and hydrogen peroxide, which is considered a factor for its antimicrobial activity 4, along with the high osmolarity of the product 4, 5.

As it is a high nutritional value product, it is used to treat and prevent physical and mental fatigue. Moreover, it is claimed to contain properties that assist with the treatment of ulcers 4, and it shows anti-inflammatory activity 6. Honey can be classified by its origin, therefore, it is divided into two categories: floral honey or honeydew. Floral honey is obtained by the bee’s feeding on the nectar of the flowers, and it can be subdivided into either monofloral or poly floral. Monofloral honey is composed by bee’s feeding on flowers from the same family, genus or species only, and poly floral honey is obtained by bee’s feeding on several different varieties of flowers. On the other hand, honeydew is constituted from a nectar sucker insect’s excretion 7.

In Brazil, Tetragonisca angustula and Apis mellifera scutellata bee’s honey are popularly known and employed due to its medical properties, such as hydrating, antioxidant, anti-seborrheic, anti-dandruff, anti-psoriasis, anti-inflammatory, anti-microbial, wound healing, and others, 4, 6, 7 being an accessible alternative to Manuka honey, a therapeutical New Zealand honey commonly used for the treatment of wounds 4. Additionally, according to Gupta et al., bandages containing honey accelerates wound resolution, to make wounds sterile in less time and present better healing results in hypertrophic and burning wounds when compared to silver sulfadiazine dressing 8.

Phytotherapic drugs constituted by honey are largely used in several places around the globe. The main use of these associations is the treatment of cough and respiratory tract issues.  Recently, honey is being associated with Aloe vera, a plant used as a medicine for over 1000 years for the treatment of wounds and burns due to its hydrating, anti-inflammatory, antimicrobial and scaring activity 9. The scaring activity of Aloe vera is a result of manose-6-phosphate, present in its pulp. Functional polysaccharides of Aloe vera promotes fibroblast proliferation 10, angiogenesis and hyaluronic acid and hydroxyproline production; substances that are important on extracellular matrix remodeling during wound scarring 11.

Clinical trials performed on humans proved the efficacy of Aloe vera in the treatment of superficial and deep burn wounds. Trials performed on mice by Tabandeh et al., showed that isolated polysaccharide from Aloe vera induced formation of metallopeptidase matrix (MMP-3) and increased TIMP2 (metallopeptidase inhibitor) expression during skin wound resolution 12. Aloe vera’s anti-inflammatory activity is a result of direct inhibition of cyclooxygenase metabolic path and reduction of prostaglandin E2 production, which presents an important role in inflammatory processes. In the study performed by Tomasin and Gomes-Marcondes, the association between honey and A. vera reduced growth, proliferation and increased apoptosis of induced tumors in Wistar rat 9.

Thus, the goal of this study is to evaluate the antimicrobial activity of Brazilian honey from different origins produced by different species of bees, furthermore to verify its synergetic potential when associated with Aloe vera.

MATERIALS AND METHODS: This experiment took place in 2016 at the Scientific and Technological Research Institute, Catholic University of Santos, Santos, Brazil. The honey samples used in this study were acquired by purchase. The first sample was produced by Tetragniscaangustula bee, in the Atlantic Forest, situated in the south region o Brazil (T-AF); the second one was produced by the same bee species but in the Pantanal Forest, midwest region of Brazil (T-MP); the last sample was produced by Apis mellifera scutellata, from Mimosa scabrella tree secretion, also in the Atlantic Forest, in the south of Brazil Atlantic forest (A-AF).

The bacterial strains used in this study were: Escherichia coli (ATCC 25922), Staphylococcus aureus (ATCC 6538), Pseudomonas auruginosa (ATCC 27853) and Salmonella typhimurium (ATCC 14028). The strains were obtained commercially in the form of impregnated paper discs and, posteriorly activated by 18 h after incubation in 10 ml of brain heart infusion (BHI) each, until reaching a turbidity corresponding to 4 in MacFarland turbidity standard.

To analyze bacterial growth by optical density, each honey sample was analyzed in three different concentrations (50%, 30% and 10% of the honey in distilled water) for each bacterial strain. Samples containing each type of honey in different concentrations were added to tubes containing the different bacteria. The tubes were incubated under constant agitation on 36 ºC in a Marconi MA830 incubator. The optical density of the samples was measured every 1 hour, during 6 h and after 24 h the first measurement, in a spectrophotometer (Brand: La Motte, Model: Smart Spectro), on 600nm wavelength.

Tetragonisca angustula honey (T-AF) from the Atlantic Forest of the South of Brazil, the honey type that presented the best bacterial inhibition results, was used for the elaboration of a compound with Aloe vera barbadensis pulp gel in the concentrations of 50% and 25% Aloe vera-honey (v/v). The Aloe vera pulp gel was prepared by extraction and homogenization of the leaf parenchyma.

RESULTS AND DISCUSSION: This study showed that every honey tested presented antimicrobial activity, independently to its origin.  Fig. 1 shows the behavior profile of Escherichia coli in relation Apis mellifera scutellata honey from the Atlantic Forest, South of Brazil Atlantic forest (A - AF)  in different concentrations. At the concentration of 10% of honey, E. coli left the latency (Lag) phase after, approximately, 3.5 h of incubation. The beginning of exponential (Log) phase can be defined as the period when optical density corresponding to the double of the initial value. Due to the low concentration of inhibition agent, the bacteria reached the stationary phase after 5 h of incubation. However, when the honey is at concentrations of 30% and 50%, E. coli was not able to reach exponential phase, which means it prevented bacterial growth at those concentrations. Moreover, when a concentration of 50% of honey, there was an initial decrease in the bacteria population, that later returned to initial values after approximately 6 h. Fig. 1 also shows a dose-response effect, although it is not linear behavior, can be easily interpreted based on the bacterial growth velocity, as seen in Fig. 2, 3 and 4 that shows the microbial growth with the three kinds of honey studied: A-AF, T-AF, and T-MP honey, respectively, for E. coli, Salmonella typhimurium, S. aureus, and P. aeruginosa. 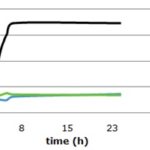 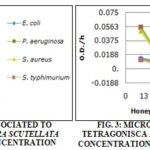 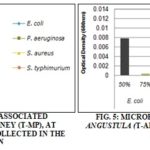 T-AF and A-AF honey, both from the same region, showed similar inhibition results as shown in Fig. 3, therefore the dose-response effect for S. aureus and P. aeruginosa is more evident and the honey at 10% didn't cause inhibition of Enterobacteriaceae microorganisms. T-PM honey, probably for presenting different flavonoid compounds, even in the concentration of 10%, showed an inhibitory effect over the Enterobacteriaceae used in this study. Resulting in similar value to the ones obtained for Pseudomonas and S. aureus.

According to Tabandeh MR et al., 21,  Aloe vera is an effective antimicrobial agent against M. smegmatis, K. pneumoniae, E. faecalis, M. luteis, C. albincans and B. sphericus, although it has no effect against E. coli, Staphylococcus aureus, Salmonella typhimurium and Pseudonomas auruginosa, microorganisms that are commonly found in necrotic or non necrotic wounds. According to the results presented in Fig. 5, it is evident that the speed of microbial growth in the presence of honey associated to Aloe vera, is possible to see a synergetic effect between both substances, with an increase of antimicrobial activity for three of the four microorganisms tested.

CONCLUSION: The tested honey at the concentration of 30% presented a similar effect as at the concentration of 50%, a positive factor for a suggested phytotherapic economic viability. The elaboration of an association Aloe vera and T. angustula honey compound, besides demonstrating better antimicrobial action than each compound itself, it demonstrated better effectiveness against Enterobacteria species (E. coli and S. typhimurium).

CONFLICT OF INTEREST: The authors report no conflict of interest.