ABSTRACT: Butea monosperma (Family: Fabaceae). This is a moderate sized deciduous tree which is widely distributed throughout India, Burma and Ceylon, popularly known as 'dhak' or 'palas,' commonly known as ‘Flame of the forest’. The family Fabaceae compromises of 630 genera and 18,000 species. It finds use both medicinally and commercially with each part of the plant having utility. This plant species has been found to display a wide variety of biological activities. The plant is traditionally reported to possess astringent, bitter, alternative, aphrodisiac, anthelmintic, antibacterial and anti-asthmatic properties. Bark yield red juice known as ‘Butea gum’ or ‘Bengal kino’. It’s reported pharmacological properties include anthelmintic, anti-conceptive, anticonvulsive, antidiabetic, antidiarrhoeal, antiestrogenic and antifertility, antimicrobial, antifungal, antibacterial, antistress, chemopreventive, haemagglutinating, hepatoprotective, radical scavenging, thyroid inhibitory, antiperoxidative and hypoglycemic effects and wound healing activities. It is a powerful astringent and is given in many forms of chronic diarrhoea. Seeds have anthelmintic property, especially for roundworms and tapeworms. Flowers yield a brilliant yellow coloring matter due to the presence of chalcones. Such herbal medicines may provide the potential effect as of compared to the conventional available synthetic drugs, with less or no side effects.

INTRODUCTION: Butea monosperma is commonly known as Flame of the forest, belonging to the family Fabaceae. It is locally called as palas, Palash, mutthuga, bijasneha, dhak, khakara, chichra, bastard teak, bengal kino, nourouc and is common throughout India, Burma, and Ceylon except in very acrid parts. The pods should be collected and shown before the commencement of rains; root suckers are freely produced and help in vegetative propagation.

The flowers are also a good source of flavonoids. The contents of the flowers are butein, butrin, isobutrin, plastron, coreipsin, and isocoreipsin. Isolation of medicarpin with antifungal activity from this part of the plant has also been reported. From the flowers of this plant species the flavonoids butin, butein, butrin, isobutrin, palasitrin, coreopsin, isocoreopsin, sulphuresin, monospermoside, isomonospermoside and 7,3,4-trihydroxyflavone have been isolated. The euphane triterpenoid 3a-hydroxyeuph-25-ene and the alcohol 2, 14-dihydroxy-11, 12-dimethyl-8-oxo-octadec-11-methylcyclohexane has been isolated from the stem. The imide palasimide has been isolated from the pods of this plant species. Studies on anti-oxidant status following ulceration indicate that free radicals seem to be associated with the pylorus ligation and ethanol-induced ulceration in rats 1.

Plant Material: The flowers of Butea monosperma (Lam.) were collected from Canal colony, New. Delhi with the help of local tribal and was identified. Fresh flowers were collected in bulk, washed under running tap water to remove adhering dust, dried under sunlight and pulverized in a mechanical grinder. The powder was passed through sieve no. 40 and used for extraction 2.

Preparation of Methanolic Extract: A weighed quantity of dried powdered flowers of the plant (70 gm) subjected to hot solvent extraction in a Soxhlet apparatus (50 cycles per each batch) using ethanol (95 %), at a temperature range of 55 °C to 65 °C. The filtrate was evaporated to dryness at 40 °C under reduced pressure in a rotary vacuum evaporator. The percentage yield of ethanolic extract was 13.25% w/w 3.

Acute Anti-inflammatory Model: Results were expressed as a percentage of inhibition of edema, calculated by the formula -

Where, Vt and Vc are the mean paw volume in the treated and controlled groups, respectively 4.

The acute anti-inflammatory effect of methanolic extract of Butea monosperma is shown in Table 1.

Acute Anti-inflammatory Model: Carrageenan-induced hind paw edema is the standard experimental model of acute inflammation. The time course of edema development in carrageenan-induced paw edema model in rats is generally represented by a biphasic curve. The first phase of inflammation occurs within an hour of carrageenan injection and is partly attributed to the trauma of injection and also to histamine, and serotonin components.

The second phase is associated with the production of bradykinin, protease, prostaglandin, and lysosome. Prostaglandins (PGs) play a major role in the development of the second phase of inflammatory reaction which is measured at +3 h. The doses 400 mg/kg and 600 mg/kg of an alcoholic extract of Butea monosperma produced a significant inhibition of carrageenan-induced paw edema at + 3h and + 6h.

Data in mean ± SD (n=6), % inhibition of the Carrageenan-induced inflammation (edema) are indicated as (%). A significant difference from control P*<0.05 vs. Control, P**<0.01 vs. indomethacin, Two-way ANOVA; SEM = Standard error of the mean. 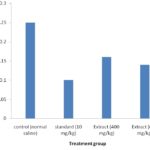 CONCLUSION: Based on the results we can suggest that the anti-inflammatory effect of Butea monosperma methanolic extract, is related to the possible presence of alkaloid and tannins in the extract. The present study justifies the folklore claims of its anti-inflammatory property. It would be interesting to isolate the possible constituents that are responsible for such activity.