ABSTRACT: Peridiopsora mori (Barclay) K.V. Prasad, B.R.D. Yadav & Sullia is one of the fungi which cause brown leaf rust on Mulberry (Morus spp.). Leaf rust disease is one of the major diseases affecting Mulberry (Morus sp.). Synthetic fungicides are commonly applied to reduce disease; however, its improper use may cause residual toxicity on silkworm, environmental and health problems. The extracts of angiosperm medicinal plants were proven by previous workers to possess antimicrobial activities against plant pathogenic fungi. In this study, the antifungal activity of leaf extracts of 5 rarely occurring medicinal plants in Kerala (Mesua ferrea L., Memecylon randerianum S. M. Almeida & M. R. Almeida, Pittosporum tetraspermum Wight & Arn., Symplocos cochinchinensis (Lour.) S. Moor and Syzygium laetum (Buch.-Ham.) Gandhi) were tested against Peridiopsora mori. Antifungal activity of the leaf extract was tested based on the poisoned food technique on potato dextrose agar (PDA). Leaf extracts, 5%, 10%, 15%, 20% and 25% were tested in this study. The results of this study showed that leaf extract of all the selected plants in different concentration suppressed the growth of Peridiopsora mori significantly. It was observed that the lowest concentration of leaf extract (5%) of Pittosporum tetraspermum was most effective to inhibit the mycelial growth, followed by Syzygium laetum, Symplocos cochinchinensis. But in a higher concentration of leaf extract, Syzygium laetum was most effective to inhibit the mycelial growth, followed by Pittosporum tetraspermum and Symplocos cochinchinensis. Mesua ferrea and Memecylon randerianum were least effective in all the concentrations. The leaf extracts inhibited the fungal radial growth, total biomass, and sporulation significantly.

INTRODUCTION: Peridiopsora mori (Barclay) K.V. Prasad, B.R.D. Yadav & Sullia is one of the fungi which cause brown leaf rust on Mulberry (Morus spp.).

Mulberry is cultivated for the rearing of silkworms (Bombyx mori L.) and is the basis of the silk industry. The mulberry leaves are the major source of nutrition for silkworms, whose growth, its nutritional value influences larval development and subsequent cocoon production. The leaf rust disease caused by Peridiospora mori is a prominent disease which along with powdery mildew and leaf spot responsible for 10-15% yield loss.

Mulberry leaves are used as a vegetable by humans and are a preferred food for all classes of herbivorous livestock. Mulberry fruit can be eaten fresh, they are laxative, the refrigerant in fevers and used locally as a remedy for a sore throat, dyspepsia and melancholia 1.

Brown rust affects branches, leaves, and buds of mulberry resulting in decreases in leaf quality and quantity. The rust is responsible for leaf distortion and mosaic in mulberry plant, symptoms of which include a numerous pin-head sized circular to oval brownish to black eruptive spots on the surface of the leaves 2-4. The disease is prevalent during winter and monsoon seasons. Leaves wither off prematurely, as the disease becomes more severe. Leaf rust was observed both in the field and occasionally at nurseries causing not only leaf rusts but also complete withering of sprouting mulberry cuttings at Wayanad district of Kerala and it was noticed that farmers are spraying some locally available medicinal plants for the control of this disease. In this background, the present study tests the effectiveness of selected plants against Peridiopsora mori causing brown leaf rust on Mulberry.

The leaves were surface sterilized and air dried for four days under room temperature and ground using an electric blender to powder form and extracted with methanol by soaking for 48 hours in the dark under room temperature. The extract was then filtered through two layers of cheesecloth then followed by Whatman no. 1 filter paper. The filtrates were evaporated to dryness, and the crude extract was used for antimicrobial activity 5.

Pathogen Isolation and Identification: Diseased plants were identified from the mulberry plantation of Wayanad district. Infected leaves were cut and placed in sodium hypochlorite (0.35%) solution for three minutes. After surface sterilization with distilled water, the leaves were dried on blotting paper and placed into potato dextrose agar plate and incubated at 5-7 days at room temperature 6.

Pathogenicity test was performed by atomizing the aqueous conidial suspension (4.5 × 106 conidia/ml) to the three-month-old potted mulberry plants. The control plants were kept covered with polythene bags for 48 h to maintain sufficient moisture for spore germination and development of the disease. After 15 days the similar symptoms of leaf spot as seen on the original diseased plants were observed, with the help of illustrated manuals and published papers, the fungus was identified as Peridiopsora mori 7.

The plates were then inoculated with mycelia discs of 5 mm diameter from the periphery of 4-day old culture of the test fungus growing on potato dextrose agar plates and incubated at room temperature. Four plates were maintained in each treatment 8. The diameter of each plate was measured, and the percentage inhibition of Peridiopsora mori was examined using the formula

Effect of Extract on Sporulation: Spores were harvested in sterile distilled water from a culture maintained in a slant PDA. The suspension was passed through a filter paper (Whatman no. 2). A 200 µl spore suspension was added into 10 ml potato dextrose broth in a test tube containing various concentrations of an extract of each plant. The cultures were incubated in a dark room for five days. The number of spores was counted using hemocytometer under light microscope 9.

Effect of Extract on Fungal Biomass: 100 ml Potato dextrose agar medium was placed in Erlenmeyer flask. The leaf extracts were added to flask at concentrations varies from 5%, 10%, 15%, 20% and 25%. The medium was then inoculated with 1 ml of spore suspension. The cultures were incubated in the dark for 8 days under room temperature. The biomass was harvested through centrifugation at 5000 rpm for five minutes. The pellet was taken and placed on glass and dried in an oven at 60 ºC until constant weight was obtained 9.

The inhibitory activity against fungal biomass was calculated using the formula:

RESULTS AND DISCUSSIONS: The ability of the plant-based biomolecules is being tested in the area of agriculture disease management with a vision to develop a novel biopesticide which cause no damage to the ecosystem and for the farmers who cannot afford expensive synthetic pesticides. The results revealed that all of the tested plant extracts and every concentration showing positive results in the inhibition of pathogen Table 1.

The rate of growth inhibition was corroborated with the concentration of tested plant extracts. It was observed that the lowest concentration of 5% leaf extract of Pittosporum tetraspermum was most effective to inhibit the mycelial growth, followed by Syzygium laetum, Symplocos cochinchinensis.

All of the extracts were showed a more or less inhibitory effect against conidial germination of the tested fungi. The extracts of medicinal plants exhibited a marked effect on sporulation Table 2 and biomass formation of Peridiopsora mori Fig. 1. Syzygium laetum leaf extract at 25% significantly inhibited (95.56%) the spore formation and 91.75% biomass formation followed by Pittosporum tetraspermum and Symplocos cochinchinensis. Mesua ferrea and Memecylon randerianum were least effective in all the concentrations. In case of least concentration at 5%, it was observed that Pittosporum tetraspermum inhibited 43.01% spore formation and 45.78% biomass formation.

TABLE 2: INHIBITORY ACTIVITY OF PLANT EXTRACTS AGAINST THE SPORE FORMATION OF PERIDIOPSORA MORI 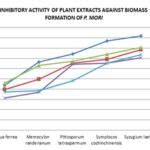 Some antifungal compounds of diverse skeletal patterns have been found in the plants. These compounds belong mainly to six broad chemical groups, such as phenolics and phenolic acids, coumarins and pyrones, flavonoids, isoflavonoids, steroids and steroidal alkaloids, and other miscellaneous compounds. However, only a few commercial products from the plant are being used in practical plant protection.

The inhibitory activity increased with increasing concentrations of this extract within the tested concentration. Phytochemical constituents present in the plant Pittosporum eriocarpum has been evaluated and revealed it is bestowed with many phytochemicals 10. There were no attempts have been made in the isolation and identification of phytochemicals present in Pittosporum tetraspermum which showing unique distribution pattern. Inhibitory effects shown by Pittosporum tetraspermum are promising and are statistically significant (p<0.01, p<0.05).

The results point to the need for a detailed investigation into the phytochemical composition of this plant. Lowest concentration (5%) of this plant extract is showing high potential to inhibit the growth rate and spore formation of the fungi P. mori. There is every possibility to develop a novel drug from this plant. On-farm conservation strategies will be generated if the economic potential of this plant will be exploited which eventually lead to a sustainable means of conservation.

Several plants and its extracts possess inhibitory activity against various fungi on its growth and sporulation. The methanolic and ethyl acetate extract of neem seed kernel has inhibitory effects in the spore germination and fungal biomass production of Aspergillus parasiticus 11. Spore germination of Fusarium oxysporum has been significantly reduced by the extracts prepared from Allium sativum followed by Allium cepa and Mentha arvensis 12.

Crude extracts of Alpinia galanga leaves exhibited highest antifungal activity as reduced radial growth, dry mycelia weight, sporulation and germination rate of Colletotrichum gloeosporioides 14. The leaf extract of Syzygium cumini showed promising results in the control of various gram positive and gram negative bacteria 15. The current study also revealed the potential of plants belongs to the genus Syzygium in the control of leaf rust causing pathogen of Morus sp. Syzigium laetum has shown the highest inhibitory effects in the growth rate, biomass and spore formation of Peridiopsora mori than all the other four tested plant species.

The results show the dependence of the concentration of plant extract with inhibition of pathogen by an increase in concentration leads to raised inhibition which is also statistically significant (p<0.01, p<0.05).

It is evident from the present study the plant formulations have antifungal activity, but none of them showed cent percent inhibition. The bioactive compounds from this plant have to be isolated, and a commercial product should be developed which can control the rust disease in Mulberry. As it is a natural botanical pesticide with low risk of toxicity to humans and animals, it can be conveniently used as one of the important plant protection agents in integrated pest management (IPM) programmes in the subsistence farming. Botanicals are environmentally non-hazardous, non-toxic and can be easily formulated and applied by the farmers.

A detailed and thorough investigation has to be made in the analysis of phytochemicals responsible for the inhibition of pathogen. A herbal remedy would be a promising alternative to a load of synthetic chemicals and pesticides which cause serious damage to the ecosystem.

ACKNOWLEDGEMENT: The authors are thankful to Mr. Nandakumar M. K. for his help during various phases of the study.