ABSTRACT: Considering the prevalence of epilepsy and the problems associated with currently available antiepileptic drugs like side effects, resistance, safety issues and high cost, herbal medicines with fewer complications could be very appropriate alternative. Therefore, in the present study, we have examined the antiepileptic properties of ethanolic extract of Rhododendron arboreum leaves in mice using maximal electroshock seizure (MES) test, Pentylenetetrazole (PTZ) induced seizures, Strychnine induced convulsion and brain amine estimation method. The ethanolic extract at 200 mg/kg and 400 mg/kg possess dose- dependent anticonvulsant activity as it reduced the duration of seizures produced by maximal electroshock and delayed the latency of seizures produced by PTZ and Strychnine. The amount of Dopamine and Nor-adrenaline which are most likely to be involved in seizure activity was increased in mice brain.

INTRODUCTION: Epilepsy is a common neurological disorder characterized by unpredictable, unprovoked recurrent seizures resulting from a brief episode of abnormal excessive or synchronous neuronal activity in the brain. 50 million people (1-2% of the world's population) are estimated to be epileptic 1 with overall mortality rate of 24% and more than half of the deaths were related to epilepsy itself, including sudden unexpected death (SUDEP) 2. Several antiepileptic agents are used in the management of epilepsy however, the side effects, dose-related and chronic toxicity involving virtually every organ system are of great concerns.

Additionally, the high cost of newer and more effective antiepileptic drugs has made the management of epilepsy more challenging in developing countries 3. Hence, there is great need for safe, potent and cost effective agents for the management of epilepsy and plant source are considered to have better edge over synthetic drugs. Therefore, the focus has shifted towards herbal medicines to discover better and safer medicine for epilepsy 4.

Rhododendron arboreum (Family: Ericaceae) is a medium size tree of 7-14 m height found in Himalayan forests of Nepal, India and Bhutan all along subtropical and temperate regions from 1200-4000 m. Trunks of R. arboreum are usually branched, gnarled or crooked. Barks are reddish brown in color, exfoliating in thin flakes. The colors of flowers range from a deep scarlet, to red with white markings, to pink to white.

Leaves are oblong-lanceolate with 10-20 cm in length and 3.6 cm width. Leaves are crowded towards the ends of branches, petioles are covered with white scales when young and the veins are deeply impressed 5. Previous biological studies have reported anti-hyperglycemic and anti-hyperlipidemic 6, anti-inflammatory 7 and hepatoprotective activities 8 in R. arboreum. To date there is no scientific evidence to justify the traditional use of R. arboreum in the treatment of epilepsy. Hence, the present work was designed to evaluate the antiepileptic activity of ethanolic extract of leaves of R. arboreum (EERA).

MATERIALS AND METHODS: Leaves of wild-grown R. arboreum wild-grown were collected from hilly region of Nepal. Identification of the species was done by Dr. K. Ravi Kumar, Senior Botanist at FRLHT (Foundation for Revitalisation of Local Health Traditions), India and the specimen was deposited at Rajiv Gandhi University of Health Sciences. The leaves were shade dried at room temperature for 15 days and pulverized.

Extraction Procedure: Leaves of R. arboreum were shade dried and then powdered using mechanical grinder. The coarse powder was extracted with 50% ethanol (hydro-ethanol extract) after defatting with petroleum ether by Soxhlet extraction for 72 h. The extracts were concentrated under reduced pressure at 50-60 °C and stored in desiccator for further use.

Phytochemical Screening: The plant extract was subjected to phytochemical screening following standard method to detect the presence of different phyto-constituents 9.

Animals: Healthy adult Albino mice of either sex and approximately of same age, weighing between 20-30 g were used for the study. The animals were housed in polypropylene cages with stainless steel grill top containing facilities for food, water bottle and bedding of clean paddy husk. UV purified, filtered water (In polypropylene bottles with stainless steel sipper tubes) and food were provided ad libitum. Air conditioned rooms were used with optimal air changes per hour with temperature of 20-25 ºC and elimination cycle of 12 h light and 12 h dark. The animals were maintained under standard condition in an animal house approved by the Purpose of Control and Supervision of Experiments on Animals (CPCSEA). The study protocol was approved by the Institutional Animal Ethics Committee (IAEC), Mallige College of Pharmacy, Bangalore. The animals were acclimatized for one week in experimental room. After acclimatization, the animals were subjected to gross observation to ensure that the selected mice were in good state of health and were randomly selected for study.

Maximal Electroshock Seizure (MES) Test: Mice weighing 20-30 g were divided in 4 groups (6 animals each): Control (0.9% Saline), standard (Phenytoin 25 mg/kg, i.p.), group III (EERA 200 mg/kg, p.o.) and group IV (EERA 400 mg/kg, p.o.). Group III and IV were dosed EERA once a day for three weeks. On the 21st day, after 30 min of i.p. injection of Phenytoin and 60 min post oral administration of extract, all the groups were subjected to electrical stimulus of 50 mA for 0.2 sec through auricular electrode to induce maximal seizure of their hind limbs, with tonic extension as the endpoint of the test 10. MES induced convulsion in animal indicated epilepsy of grand mal type. Decrease in the duration of hind leg extension was considered as a protective action.

Pentylenetetrazole (PTZ) Induced Seizures: In this test, mices were divided in 4 groups (6 animals each): Control (0.9% Saline), standard (Diazepam 5 mg/kg, i.p.), group III (EERA 200 mg/kg, p.o.) and group IV (EERA 400 mg/kg, p.o.). Group III and IV were dosed EERA once a day for three weeks. On the 21st day, after 30 min. of i.p. injection of Diazepam and 60 min post oral administration of extract, PTZ (80 mg/kg) was administered intraperitoneally to all the groups. The animals were observed individually in the cage for an hour. The time interval between PTZ-injection and occurrence of seizures were measured. The delay of onset was calculated in comparison with the control group 11.

Strychnine Induced Convulsion: Albino mice of either sex were divided into 4 groups (6 animals each): Control (0.9% Saline), standard (Diazepam 5 mg/kg, i.p.), group III (EERA 200 mg/kg, p.o.) and group IV (EERA 400 mg/kg, p.o.). EERA was administered once daily to group III and IV for three weeks. On the 21st day, after 30 min. of i.p. injection of Diazepam and 60 min post oral administration of extract, strychnine nitrate (2mg/kg, i.p.) was given. The time until occurrence of tonic extensor convulsion and death were noted during 1 h period 12.

Brain Amine Estimation: Biogenic amine external standards (Norephinephrine, dopamine) were prepared as 0.5μM solution in 0.1N perchloric acid (PCA). For tissue preparation, mice were decapitated and brains were removed rapidly and dissected at 5 ºC. Brain samples were homogenized immediately in 20 vol (wt/vol) of ice-cold 0.1N PCA containing 0.5 μM dihydroxybenzylamine (DHBA). The homogenated sample was centrifuged for 20 min (15,000 × g) at 2 ºC to precipitate protein. For Dopamine measurement in the striatum, the supernatant fluid was diluted 10- fold with 0.1N PCA to obtain concentration of endogenous dopamine in the linear range of the assay. 5-15 μl of PCA extract was injected into HPLC system 13. To prepare the mobile phase, 6.8 g of sodium acetate, 100 mg of disodium EDTA and 1 g heptone sulfonate were diluted in 935 ml of water. pH was adjusted to 4.0 with acetic acid and the solution was filtered through a 0.45μM milipore filter. To this solution, 65 ml of acetonitrile was added and buffer was de-gassed under vacuum. HPLC analysis was carried out at 254 nm and 280 nm and the chromatograms were selected from the 280 nm 14.

Statistical Analysis: All the values were expressed as mean ± SEM. Statistical analysis was performed by one way analysis of variance (ANOVA) followed by Dunnett's test. P values P<0.05, P<0.01, P<0.001 were considered as statically significant.

RESULTS AND DISCUSSION: No death was recorded amongst the groups of mice up to a dose of 400 mg/kg for 3 weeks. This suggests that the plant extract is relatively safe and non-toxic in mice at the doses used in this study.

Phytochemical Screening: The hydroethanolic extract of the R. arboreum leaves were subjected to the phytochemical analysis to identify the presence of the phytoconstituents. The extract revealed the presence of flavonoides, terpenoids, tannins, phenolics and carbohydrates while alkaloids, phytosterols, proteins, amino acid and glycoside were not found.

The MES test, developed by Toman and collaborators more than 60 years ago is still the best validated preclinical test which predicts the drug’s effectiveness against generalized seizures of the tonic-clonic (grand mal) type. It allows us to evaluate the ability of a substance to prevent seizure spread through neural tissue 15. The anticonvulsant activity induced by MES model of EERA is shown in Table 1, in which the extract has offered significant and dose-dependent protection, comparable to that of Phenytoin (standard). Since, EERA significantly inhibited generalized tonic-clonic seizures in MES test; it suggests the presence of anticonvulsant compounds.

Pentylenetetrazole (PTZ) Induced Seizures: PTZ-induced convulsions in mice are considered as a suitable model for petit mal epilepsy. PTZ is GABA antagonist. Drugs antagonizing PTZ-induced seizures are generally useful in the treatment of petit mal epilepsy. PTZ-induced seizures can be prevented by drugs which reduces T-type Ca2+ currents (ethosuximide) and also by the drugs which enhances GABAA receptor-mediated inhibitory neurotransmission like Phenobarbital and Benzodiazepines 3.

Strychnine acts as a selective competitive antagonist which blocks the inhibitory effect of glycine (inhibitory amino acid in CNS) at all glycine receptors 16. The activity observed in this experiment suggests that R. arboreum possesses compounds which interact with glycine receptors to significantly prolong the onset of the action of strychnine.

Brain Amine Estimation: The role of biogenic amines in epileptogenesis and recurrent seizure is well- documented and many experimental procedures designed to increase monoaminergic activity have exhibited antiepileptic properties. Dopamine level increased in EERA (200 mg/kg and 400 mg/kg) treated group compared to that of control group. EERA at 400 mg/kg increased the brain Noradrenaline level close to that of Phenytoin (Standard) Table 4, Fig. 1 and 2. Noradrenergic systems in striatum and hippocampus and the dopaminergic system in the striatum have important roles in seizure susceptibility in mice 17. Drugs that stimulate the dopaminergic system such as Amphetamines, Apomorphine and anti-parkinsonian drugs like Bromocriptine and Pergolide have antiepileptic action. Noradrenaline also plays the important role in modifying the epilepsy-induced neuronal changes especially on the limbic system 18. 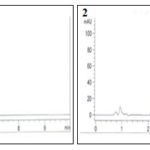 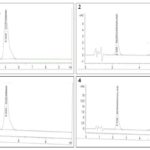 Biogenic amines play the crucial role in the control of MES and PTZ induced seizure in mice. Our findings  support  the  hypothesis  that the  increase in monoamines levels decreased the susceptibility to  MES  and  PTZ  induced seizure in  mice. The ability to restore the Dopamine and Noradrenaline in brain can be done by the phyto-constituent like flavonoides, saponin and terpenes present in the plant 19. R. arboreum also contains flavonoides, terpenes and tannin which might be contributing to restore biogenic amine in brain.

CONCLUSION: This study showed that ethanolic extract R. arboreum possessed dose-dependent antiepileptic properties. These findings provide some basis to justify the common use of R. arboreum extracts in the treatment of epilepsy. However, there is a scope for further studies to explore molecular mechanism and to identify the phyto-constituent responsible the activity.

ACKNOWLEDGEMENT: This study was supported by Mallige College of Pharmacy, Rajiv Gandhi University of Health Sciences.