INTRODUCTION: Clerodendrum viscosum (Vent.) belongs to the family Verbenaceae. Bengali/Vernacular names are Ghetu, Bhat. Tribal names are (Chakma); Kho pa che, Khun kha baong (Marma); Baita gach (Garo). The plant is tonic, antipyretic and anthelmintic. Leaves and roots are used in asthma, tumors and certain skin diseases. Infusion of the leaves is used as bitter tonic and antiperiodic in malaria. The expressed juice of the leaves is laxative and cholagogue. Leaves are also used in chest complaint with a cough and difficult expectoration.

In Rangamati, leaf-boiled water is used as a bath in jaundice by the tribal; Marmas take a bath for scabies. Root juice is warmed and rubbed on the penis to treat impotence. Root juice along with ginger is given to relieve colic pain by the Garo in Madhupur. Alcoholic extract of the young leaves possesses strong antibacterial and poor antifungal properties 1, 2.

Plant Material Collection and Identification: Leaves of Clerodendrum viscosum (Vent.) were collected from the district of Chittagong and were identified by the experts and preserved in the herbarium, department of botany, University of Chittagong.

Preparation of Extracts Preparation: The leaves were collected and clean to separate from undesirable plant parts. They were air-dried for one week. The fruits were milled into coarse powder by using laboratory milling equipment. Cold extraction was performed during extract preparation. About 250 g of powdered material was taken in a clean, flat bottomed glass container and 900 ml of 80% methanol were added in the container. The container with its contents was sealed and kept for 10 days accompanying occasional shaking and stirring to enhance the efficient extraction. The whole mixture then filtered through a piece of clean, white cotton and finally, it was filtered through Whatmann filter paper [Bibby RE200, Sterilin Ltd., UK]. The filtrate (methanol extract) obtained was evaporated under the ceiling fan and on a water- bath until dried and % yield of fruit calculated 3.57% 6. The extract was stored at 4 ºC in the refrigerator until use.

Experimental Animals: Young Swiss-albino mice aged 4-5 weeks old and average weight 20-25 g were employed for the experiment. The mice were purchased from the Animal Research Branch of the International Centre for Diarrheal Disease and Research, Bangladesh (ICDDR, B). They were kept in a standard environmental condition (RH 55% to 60%, room temperature 25± 2 ºC and 12 h light/ dark cycle) for one week for adaptation after their purchase and fed ICDDR, B formulated rodent food and water. The experimental study was performed under the guidelines of Institutional Animal Ethics Committee 7.

DPPH free radicals Scavenging Activity: The free radicals scavenging activity of both plants extract were measured by decreased the absorbance of the methanolic solution of DPPH (2, 2-Diphenyl-1- picrylhydrazyl). The method modified by Gupta et al. 8, 9 Stock solutions (1 mg/ml) of the plant extracts were prepared in methanol from which serial dilutions were carried out to obtain concentrations of 1, 5, 10, 50, 100 and 500 mg/mL. Diluted solutions (2 mL) were added to 2 mL of a 0.004% methanol solution of DPPH, mixed and allowed to stand for 30 min for reaction to occur. The absorbance was determined at 517 nm, and from these values, the corresponding percentage of inhibitions were calculated. Then % inhibitions were plotted against concentration, and from the graph, IC50% were calculated. The experiment was performed in duplicate, and average absorption was noted for each concentration. Ascorbic acid was as a positive control.

Antimicrobial Activity: The antimicrobial screening was performed using the disc-diffusion method. Sample disc 50 g/disc and Standard Kanamycin (30 µg/disc) discs were used as positive control, and blank discs were used as negative controls. The sample discs, standard antibiotic discs, and control discs were placed gently on marked zones in the agar plate’s pre-inoculated with test bacteria, protozoa, and fungi. The plates were then kept in a refrigerator at 4 ºC for about 24 h to allow sufficient diffusion of materials from discs to surrounding agar medium.

Antidiarrheal Activity: Castor oil induced diarrheal model was followed for this experiment. The method, described by Chatterjee was followed for this study 13. The employed mice were screened initially by giving 0.3 ml of castor oil and only those showing diarrhea was selected for the final experiment. The test animals were selected randomly and divided into three groups and each group having three mice. They were accurately weighed & properly marked of the experimental groups.

As group-I or the control received only distilled water containing 1% Tween-80 (10 ml/kg). Group-II or the positive control received the standard anti-motility drug, Loperamide (5 mg/kg) as an oral suspension. The test group III was treated with a suspension of fruits extract of Clerodendrum viscosum (Vent.) at the oral dose of 100 mg/kg and 200 mg/kg body weight. Test samples, control, and Loperamide were given orally using a feeding needle.

Castor oil dose of 0.5 ml per mouse was administered to all mice, and after 1 h of administration, the mice were fed with the samples, control, and Loperamide. Individual animals of each group were placed in separate cages with adsorbent paper beneath the case and examined for the presence of diarrhea every hour in four hours of study after the castor oil administration. Stool or fluids from the mouse are the sign of induction diarrhea.

A number of stools or any fluid material that stained the adsorbent paper were counted at each successive hour and noted for each mouse. The latent period of each mouse also counted. At the beginning of each hour, old papers were replaced for the new ones. During an observation period, the total number of stool output including diarrheic faces excreted by the animals was recorded. A numerical score based on stool consistency was assigned as follows: normal stool=1 and watery stool=2 14-16.

Experimental Induction of Diabetes: Experimental induction of diabetes in mice, a freshly prepared solution of alloxan monohydrate in normal saline at a dose of 120 mg/kg body weight, were injected to mice intraperitoneally. Alloxan can produce fatal hypoglycemia as a result of massive pancreatic insulin release mice were treated with 20% glucose solution (5 - 10 ml) orally after 6 h. The mice were then kept for the next 24 h on 5% glucose solution bottles in their cages to prevent hypoglycemia. After 1 week, mice with moderate diabetes that exhibited glycosuria and hyperglycemia (i.e., blood glucose concentration >200 mg/dL) were taken for the experiment.

Treatment was continued for 6 hours following oral administration to the experimental animals by gastric intubation, using a force-feeding needle. Blood glucose was estimated on withdrawing blood samples were from tail vein before dosing (0 hours) and then a 1st h, 3rd h and 5th h respectively from all groups of mice. A fixed amount of rat chow and fluid was given to each rat and replenished the next 17, 18.

RESULT AND DISCUSSION: Antioxidant activity, % scavenging of the DPPH free radical was measured, and calculation was done, and results are summarized as Table 1 and Fig. 1. 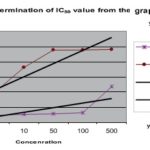