ABSTRACT: Garlic is one of the earliest well known medicinal plants, which used to cure different disease in a human being. It used to fight infections, prevent cancer, antidiabetic, hepatoprotective, anthelmintic, anti- antioxidant, and wound healing. Based on the above important of garlic, this study was conducted to investigate the antibacterial activity of garlic extracts (ethanol, acetone and aqueous extracts) against bacterial strains. The antibacterial activity of garlic was tested against gram-positive Bacillus subtitles and gram-negative E. coli bacterial strains by using agar well diffusion method. The results reveal that garlic extract shows inhibitory activity against gram-positive bacteria Bacillus subtilis and gram-negative E. coli bacterial strains. The maximum zone of inhibitions observed against Bacillus subtilis with the combination (32 mm), aqueous (30 mm), ethanol (26 mm), and acetone (22 mm) extracts, respectively. Minimum inhibition zone was observed in all extracts against Gram-negative Bacteria (E. coli), i.e. combination (21 mm), aqueous (16 mm), ethanol (14 mm), and acetone (12 mm). The results showed that B. subtilus is more susceptible to garlic extracts as compared to E. coli.

INTRODUCTION: Garlic, is a member of the Alliaceae family, which has been widely recognized as a valuable spice and a popular remedy for various ailments and physiological disorders 1,  2. The name garlic was originated from the Celtic word ‘all’ meaning pungent 3. It was cultivated throughout the world, such as central Asia, China, the Near East, and the Mediterranean region, Central and Southern Europe, Northern Africa and Mexico 2, 3. Garlic has been used for thousands of years for medicinal purposes 1, 3. Many nations such as Egyptians, Babylonians, Greeks, and Romans used garlic for healing purposes, antibacterial activity, and it was used as an antiseptic to prevent gangrene during World War I and World War II 1, 2, 3.

Currently, Garlic’s uses principal medicinal to prevent and to treat cardiovascular disease by lowering blood pressure and cholesterol, as an antimicrobial, and as a preventive agent for cancer 4. Garlic also inhibits platelet aggregation and enhances fibrinolytic activity, reducing clots on damaged endothelium 3, 4. The active constituents that are found in garlic like sulfur-containing compounds are rapidly absorbed, transformed and metabolized 2, 4. These lead the various exploiting of garlic plant in many sectors. Garlic contains around 33 sulfur compounds, several enzymes, 17 amino acids, and minerals 4, 5. These sulfur compounds are responsible both for garlic’s pungent odor and medicinal effects 2, 5. One of the most biologically active compounds is allicin (diallyl thiosulfinate or diallyl disulfide) that activates the enzyme alliinase, which metabolizes alliin to allicin 4. Allicin is further metabolized to vinyl dithiins as shown in below. Besides, garlic contains biologically important nutrients such as proteins, sterols, salicylic acids, vitamins, enzymes, organic compounds and lipids as summarized in Fig 2 3, 5. 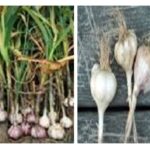 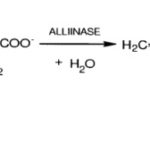 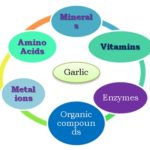 Traditionally, plants were used as a source of food, shelter and medicines 4. There are many Medicinal Plants like garlic that play a crucial role in supplementary to the limited modern health care and food availability in many countries 2, 3. As estimated via WHO up to 80 percent of people still rely on medicinal plants mainly on traditional remedies for their medicines 3, 5.

This is because they have no or little side effect and can easily be available at affordable prices 3.  Sometimes they are the only sources of health care available to poor people particularly in the third world countries like Ethiopia 4.

Currently, garlic being continued to playing important roles in the traditional medicine for treatment of a variety of disorders, including allergies, cancer, diabetes mellitus, inflammation, ulcers and antioxidant 2, 3. Garlic (Allium sativum) in the family Liliaceae is a perennial bulb-forming plant 5. It is known worldwide for several centuries, and it has been used for dietary and medicinal purposes (Ross et al., 2001). Garlic (Allium sativum L.) exhibit broad antibiotic activity against both gram negative and gram positive bacteria including Escherichia, Salmonella, Staphylococcus, Strepto-coccus, Rlebsiella, Proteus, Bacillus, Clostridium, Helicobacter, Pylori 5.

Several studies also have confirmed that garlic prevents humans or animals from infective agents like bacterium, virus and fungus 2, 3.

Insight the above importance of garlic, this study was aimed to investigate the antibacterial activity of garlic extract (ethanol, acetone and aqueous) extracts, and was compared with ciprofloxacin and ampicillin as control, against known bacterial pathogens such as Escherichia coli and Bacillus subtilis.

Chemical and Reagents: Muller Hinton agar was used as Growth media. Solvents such as aqueous, ethanol and acetone were required for extraction purpose.

Obtaining of Plant Samples: Mature healthy and fresh garlic was purchased from the local market from Adigrate Town. They were brought to the laboratory for further pre-treatment.

Preparation of Garlic Extract: Garlic was peeled and dried in drying oven. The dried garlic was ground into powdered using mortar and pestle. 5 g of powdered garlic materials were placed in cotton stamped. 75 mL of various solvents (ethanol, acetone and aqueous) was added into three separate round bottled flasks. The extraction was performed adopting "Soxhlet apparatus." The extracts were filtered through Whitman paper # 42 as the crude extract. The crude extracts were collected and stored for further studies.

Investigation of Antibacterial Activity of Garlic Extracts: The antibacterial activity test of garlic extracts against E. coli and bacillus was carried out by the agar-well diffusion method. The 20 mL of sterilized Muller Hinton agar was poured into sterile Petri dish and solidified. On it, 100 µL of E. coli and Bacillus were swabbed on the respective plates. The seeded agar was punched out with a sterile cork borer at equally spaced wells on the medium to make holes. The extracts methanol, ethanol, acetone and their combination were filled in the wells and incubated for 24 h at 37 ºC. The diameter of inhibitory zones measured in mm. The antibiotics, ampicillin (AMP) and ciprofloxacin (CPX) were used as controls for comparison with the raw extracts. The plates were observed for zones of inhibition after incubation followed by calculation of the mean zones of inhibition (mm).

RESULT AND DISCUSSION: The antibacterial activity of ethanol, aqueous and acetone extracts of garlic were investigated using agar well diffusion method 3. After standardization of each solvent extracts (aqueous, ethanol and acetone extracts), the antibacterial activity of garlic was tested against E. coli and Bacillus subtilis bacterial strains. To observe the synergetic effect of garlic extracts, the three extracts were combined and were tested against E. coli and Bacillus. The antimicrobial activity of the extracts and their potency was assessed by the presence or absence of inhibition zone and zone diameter. The inhibition zones of acetone, ethanol, aqueous extracts, and their combination were shown in Fig. 3 and Table 1 below. 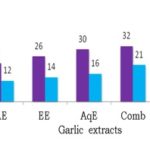 FIG. 3: THE ANTIBACTERIAL ACTIVITIES OF GARLIC EXTRACTS AGAINST E. COLI AND BACILLUS

Among the three macerated forms of garlic extract ethanol, acetone, and aqueous garlic extracts, their combined form shows the highest inhibition zones .32 mm for Bacillus, 21 mm for E. coli. This reveals that the additive or synergistic effect which enhanced effect produced by the combination of three garlic extracts.

Comparison of Antibacterial Activities of Garlic Extracts with Standards Antibiotics:

As shown in Table 2 the antibacterial activities of garlic extracts are almost similar with standard antibiotics ampicillin and ciprofloxacin. Results obtained in this study have revealed that garlic has very high antibacterial activity against the test organisms, Bacillus and E. coli bacterial pathogens. Therefore, it is important to search the natural antibiotic sources like garlic extracts for the prevention and treatment of several diseases. Thus, the use of garlic plant extract has well known antibacterial properties and a great significance for treatment.

CONCLUSIONS: The antibacterial activities of garlic in this study were investigated with three solvent extracts (aqueous, acetone and ethanol). Their inhibition zones were put in the order of: Combination (21-32 mm) > aqueous (16-32 mm) > ethanol (14-26 mm) > acetone (12-22 mm). The result reveals that three extract (combinations) is more effective and shows maximum inhibition zone, i.e. 32 mm for Bacillus and 21 mm for E. coli. This reveals that the additive or synergistic effect of three garlic extracts. In general, a single clove of garlic has the potential of curing a man of a large number of diseases by inhibiting the population of different strains of bacteria and fungi. So, it is too important to use the natural antibiotic sources like garlic for the prevention and treatment of several diseases; since it is available with low price, no side effect and eco-friendly with the environment.

ACKNOWLEDGEMENT: The author expresses their gratitude to the Department of Chemistry, Adigrat University, Ethiopia, for providing the laboratory facilities.